It seems there’s no better time for a franchise reboot. Simply take an existing series that even the fans have given up on (e.g. Bond or Batman), remove the clutter that messed it up in the last few versions (e.g invisible cars, nipples on the batsuit) take it all back to basics (real stunts, gritty realism) and generally try to find what made the idea so appealing to begin with. 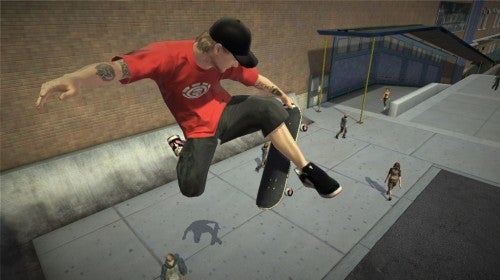 Well, no games series needs a reboot more than Tony Hawks. Fed up with trying too hard grunge and pitiful faux-punk anarchy? Don’t worry, it’s gone. Not in the mood for another tiresome rags-to-riches skater storyline? Ditto. Sick of staring at Bam Magera’s witless mug during endless cut scenes? Well, he’s still in there, but his screen-time is minimal. With Project 8, the series is back on track, doing what it does best – ludicrous tricks and combos in well-designed areas, with plenty to see, do and explore.


It’s not that Project 8 takes things completely back to square one. Like American Wasteland it’s an attempt to take skating into an open world format, but here it’s done much more effectively, with a seamless city of interlinking districts that – once unlocked – you can move in-between without a pause. There’s no attempt to paint this environment as anything but a fantasy, and the game is all the better for it – the districts favour tight-design over empty quantity. 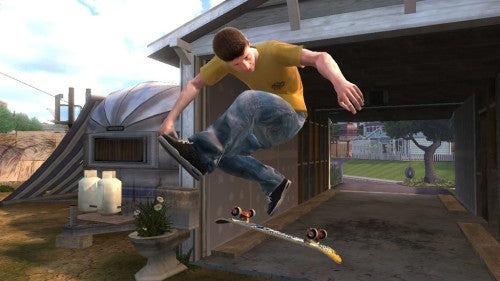 Look around and there are few surfaces that don’t present some sort of grinding or tricking opportunity. The locations vary from grimy parks to grand civic structures and suburban street scenes, and each is bustling with just enough skaters and pedestrians to look interesting, but not so many that you’re permanently dodging and weaving. This isn’t an attempt to replicate the real world, just to create a world in which would-be skaters can have fun.


This slant is reflected in the new Xbox 360-powered visual style. Project 8 is brighter and breezier this time around, it’s streets, parks and gardens bursting with vivid colour and luminous lighting. While the 3D horsepower of Microsoft’s beast is obvious in the detailed textures and realistic character models, not to mention the soft glows and focus-blur effects that pop in from time to time, there’s not too much background clutter or shiny-surface excess. 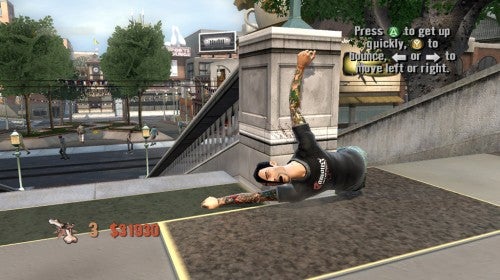 Meanwhile, the motion-captured animation and rag-doll damage effects are as good as these things get. If Amped 3 made you go “ouch” with its spine-twisting, neck-snapping antics, then Project 8 takes things to a whole new level. If the feel of skin ripping on tarmac was any more tangible, you’d have to play the game wearing pads.

However, the real star here is the gameplay. It’s always hard to build a game that will attract and hold newbies to a series while keeping existing fans happy, but Project 8 pretty much nails it. If you’ve never played Tony Hawks before, there are comprehensive tutorials to get you going, then the game inconspicuously funnels you through a couple of basic areas where you can build on your skills and get to grips with the basic game dynamics before venturing forth into the larger game world. 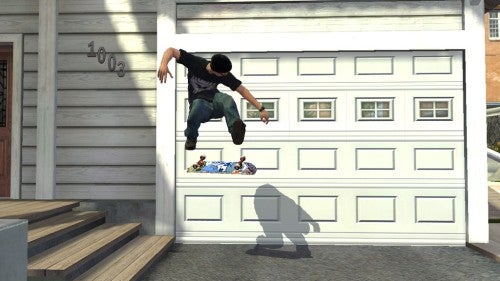 Old hands, meanwhile, can zip through these areas, still getting something worthwhile done through virtue of the fact that each of the 200-odd goals in Project 8 can be completed at three different levels: Am (nice and easy), Pro (more challenging) and Sick (ludicrously tricky). Without any story mode to push you from one task to the next your aim is simple: complete goals and rack up points, and you’ll move up the rankings. Get high enough, and you’ll be invited to perform in special missions, demonstrations or competitions. Do well in these, and you unlock new areas and – if you try hard and you’re very, very lucky – you might just end up in Tony’s secret Project 8 team. Now, I don’t actually have a clue what that involves – darts, maybe, or possibly contract bridge – but you know it just has to be worth all those hours and all that effort. 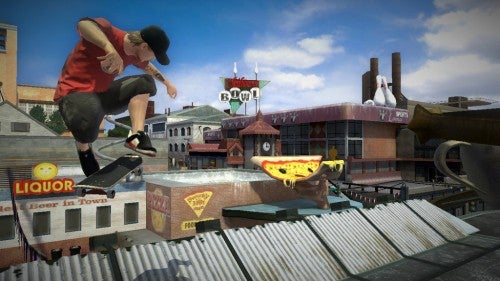 Existing fans will already be familiar with the game’s bag of flips, spins, board tricks, manuals and rail grinds, but Project 8 does bring something new to the series, and it’s a genuine showstopper. ‘Nail the trick’ mode as it’s known, switches the normal third-person view to a close-up of the board and the player’s feet. By pressing the left or right analogue sticks, you can send the board spinning and revolving under your feet, using split-second timing to switch from one stick to the other and pull off awe-inspiring combos, all in gorgeous Matrix-style slow motion. Not only is this mode engaged at specific points as part of achieving certain goals, but it can be activated any time you get air just by clicking both sticks down simultaneously.


It looks particularly cool, and it also soon becomes a cheap and effective way of grabbing extra points during otherwise unimpressive tricks. If – like me – you’re incapable of pulling off those impressive, long-running grind and manual-based combos, then you might just have found your saving grace. 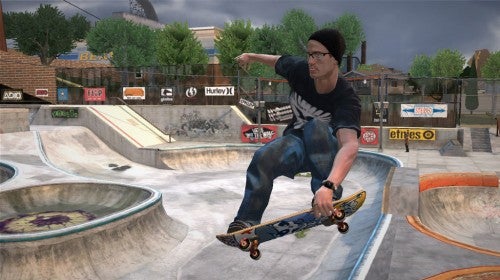 Otherwise, the controls are as slick and effective as ever. Maybe only beat-em-up fans have to master so many complex sequences of shifting sticks and hammered buttons, but it all falls into place after the first few hours or so, and once it does it’s just a matter of timing and concentration. Combine this with the well-wrought open world which encourages you to work out how to get from street-level to rooftops through a combination of jumps and grinds, and you have a basic recipe for tasty play.

The icing on the cake, then, is the goals themselves. Yes, there are basic ‘grind from here to here’ efforts, but there are also more complex missions that involve wall-riding to rip posters from public display, or Jackass-style pranks that see your skater flying through giant skittles or tumbling down steps in an effort rack up vast hospital bills. 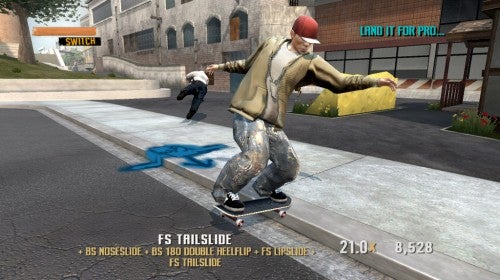 Demos are fun, with several crowds that each need to be impressed, meaning you have to juggle not just what you do but where you do it if you want to keep everyone buzzing. You also have to love the way the ‘classic’ missions have been implemented, going back to the first principles of the series with a selection of simple goals that have to be completed in a set environment, but presented as part of an ongoing feud between rival estate agents over who dominates the local patch.


Any niggles? Sure there are. Long-term fans will notice that the build your own skater options have taken a downturn since last time, and that it’s getting hard to create an avatar that doesn’t conform to the slightly depressing nose-ring, tattoos, silly haircut skater stereotype that (you’ll note) even Tony and his crew don’t conform to. 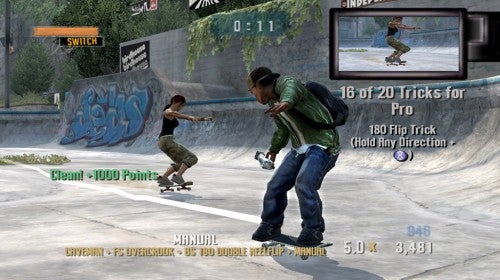 I’ve also heard talk of technical jitters and frame-rate problems, though I’d have to say I haven’t encountered any. In fact, the only serious negative point I might make is that in some areas – the humorous interludes and the deliberate bone-braking challenges – Project 8 scores worse than Amped 3, a game that has held and even grown in its appeal nearly one year on. Oh, that and the fact that My Name is Earl star and Kevin Smith regular Jason Lee, who cameo’s in his capacity as the co-founder of the Stereo skateboard brand, has been given one of the least flattering in-game personas in video-games history. Bloated and excessively hairy, he looks more like the grunge Grisly Adams than the sharp-witted co-star of Vanilla Sky and Chasing Amy.


Still, as criticisms go, we’re talking small beer. If you used to love the Hawks games in the Pro Skater glory years but gave up once things went Underground, then you’ll find this the ideal chance to get reacquainted. If, meanwhile, you’ve never played a skating game in your life, then this is a great place to start. Don’t be frightened – as Sega’s much missed Jet Set Radio made explicit, they’re really just smooth moving platform games with added tricks. All in all, like Bond and Batman before him, Tony Hawks has benefited from the franchise reboot thing. Let’s hope things go onwards and upwards from here.


The best Tony Hawks game in ages, and an entertaining ride whether you’re an old hand or new to the series. 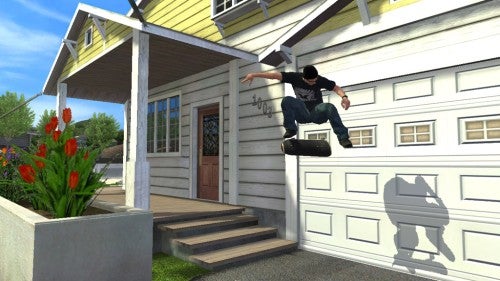