After a slow start, consumers have taken compressed digital music to their hearts over the past ten years or so. The convenience of carrying around your entire record collection in your pocket has sparked a revolution in personal music listening. But remarkably vinyl – now two generations of format old – is still going strong. For some, it’s sheer nostalgia that keeps them playing their LPs; others swear by the sound quality of a pristine record on a top-end turntable. But by far the main reason vinyl is still alive, is because of the DJ community. 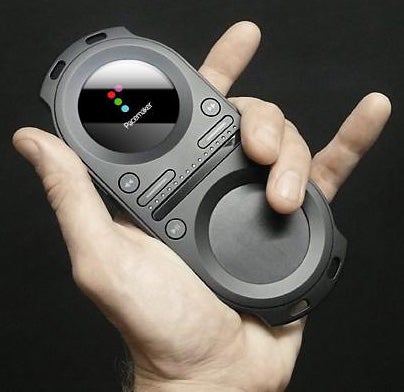 There’s something about the simplicity of manipulating the discs manually, with a stroke of the fingers and a flick of the wrist – a shove at the right moment to get two tracks in sync, a finessing of the pitch slider to get the decks/tracks in tempo – that DJing with an iPod, or even a pair of iPods can’t match.


Could the Tonium Pacemaker be the gadget that finally cracks those tough DJ nuts? This is an MP3 player with knobs on, designed to let you mix tracks, beat match and crossfade between them, just as you would with a pair of decks and a case-load of vinyl. Except you don’t need the cavernous boot of a clapped out old Volvo to transport this piece of kit around – it fits in your pocket. 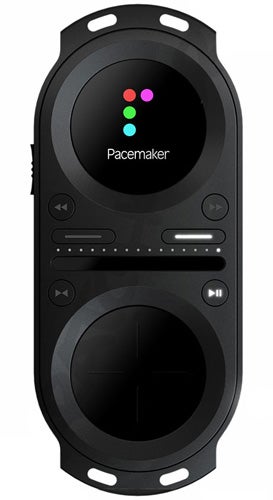 It’s a pretty slick-looking piece of kit, with its stealth-black soft-touch rubber coating and an unusual double-round ended profile. Switch it on and cool white lights illuminate the controls. But the Pacemaker is no inconsequential bauble: its controls and outputs reveal a system that’s aimed at being used, for real – a working tool rather than a gimmick.


At the centre of things is the device’s circular touchpad, which sits directly beneath a circular screen at the top. This is used to scroll quickly through track lists, adjust gain and volume levels, bass and treble. It’s also used to adjust the speed of a track and pitch bend – to slow or speed a track so it can be bumped back into sync with another, and with a track in DJ stutter pause mode it can be used to fine tune your cue point so you’ve got it exactly in time with the bass line.

In the middle, between the circular pad and the screen, is a touch-sensitive fader control, which is just as fantastically accurate and sensitive as the touchpad. Slide your finger along its track and a white LED follows your digit. This can be used to control the mix for both line-out and headphone outputs (there are two 3.5mm outputs on the bottom edge of the player), so you can fade in and out of tracks at will in private, leaving the final lineout fade to the end, once you’ve perfected the transition. Around the fader are several more controls: two buttons for switching between channels, fast forward and rewind controls, plus a play/pause and cue control.

Another key control is the thumb switch on the left edge that acts a bit like the Shift key on a keyboard, essentially tripling the number of things you can do with the controls on the face of the player. Push it towards the top when mixing and the touchpad can be used to adjust the speed of the active tune; pull it towards you and spinning your finger around its circumference adjusts the volume of the headphone output. Play with this long enough and you’ll discover other stuff, such as loop tools and effects such as roll, echo and reverb. 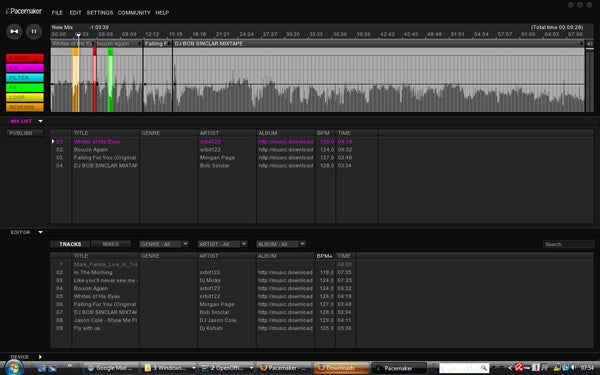 The really clever thing here, however, is that the Pacemaker displays the beats per minute of each live track at the top of its screen (to an accuracy of 0.1 bpm), This can then be used to quickly match the speed of the upcoming track to the one playing, making beat matching a lot easier. Tonium’s Pacemaker editor software – which also allows you to prepare mixes on your PC before uploading them – analyses tracks before they’re uploaded to the device and incorporates this bpm data. One really fantastic feature this enables is that you can choose to browse tracks by speed range, making selecting an appropriate track from your potentially huge library an absolute doddle.


With a bit of practice, I was happily beat matching and mixing away. The results I achieved probably wouldn’t pass muster at a hot London night spot, but the fact that I was able to achieve something close to passable within a few days is testament to the success of the user interface. The sound quality is excellent both from lineout and through the headphones, and it even manages to include a decent range of music format support: in addition to the usual MP3, there’s support for AAC files (unprotected of course), plus AIFF, FLAC, WAV, Ogg Vorbis, and even the Unix SND format. Bizarrely, though, WMA is not on the list, which could be a problem.

It’s certainly an impressive piece of kit, then – not to mention completely addictive – but it isn’t perfect. Hand it to someone used to spinning vinyl and immediately flaws become apparent. The main problem is that although it is very effective, the control system isn’t intuitive – you can’t simply hand this over to a DJ mate while you take a rest – he wouldn’t have a clue.


Tonium also appears to have missed a trick by not finding a way to involve the touchpad more. In addition to being able to fine tune the cue point, it would be lovely to be able to fast forward and rewind with a sweep of the finger; instead, you have to click and hold the buttons to navigate through a track, which is awkward and fast becomes tedious. 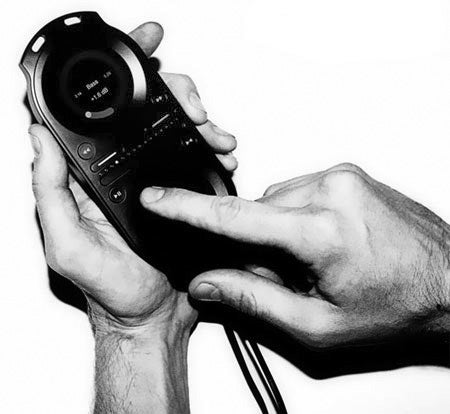 The other shortcoming is that you can’t scratch as you can with other, more substantial iPod mixing solutions – the Numark iDJ2, for instance – which is, to my mind, another missed opportunity. Once again, the touchpad system would seem to be the perfect means of controlling a scratch (it’s certainly sensitive enough), so why hasn’t Tonium included it here?


It’s clear then that the Pacemaker won’t be replacing many DJ’s decks lock, stock. Although you can use it to play an entire set on – its 120GB hard drive should be able to accommodate as many tracks as you could possibly need for that. And, let’s face it, twiddling around with a glorified iPod on stage isn’t exactly the height of stagecraft. It just doesn’t look as cool as hunching over a pair of spinning discs with headphones half-on.


So vinyl lives on for now, but I can see the Pacemaker being used as a tool that professional and semi-professional DJs could use for experimenting with ideas when lying around on the sofa, or when they’re on the move away from their precious (and bulky) collection of discs. It’s good enough for that, and the occasional impromptu house party set. The fact that, in conjunction with the software, you can mix and save sets in advance is a real boon too and could see it being used as a sidekick tool, filling in for a few minutes while you take a rest from the wheels of steel.


At £479 Tonium’s Pacemaker isn’t particularly cheap, but for a music player and DJ mixing device of this size it packs a remarkable feature set, the hard drive is big and the sound quality isn’t half bad either. What’s more, it’s addictive fun for amateurs to play around with too.