The TomTom ONE has finally been phased out, now that the Start2 has taken over the entry-level position in TomTom’s range. But the 3.5in non-widescreen used by both devices is a little small. If you fancy a larger view of the roads around you, but don’t want to spend a fortune, TomTom’s XL is still going strong, and now enters its second incarnation.

The XL2 looks similar to TomTom’s premium GO 950 when viewed from the front, with a similar 4.3in widescreen and bezel. But the device itself is slightly slimmer. As with TomTom’s other entry-level sat-navs, the screen mount is integrated into the body, so you can carry the two together more easily from car to car. However, the XL2 doesn’t adopt the new attachment system of the Start2, instead using the more ungainly wire ring found on the previous TomTom XL and ONE. Unlike the Start2, there’s no carry pouch included in the box, either – a strange omission considering the XL2 is intended to be the slightly more premium offering. A single mini-USB socket is used for PC data connection and car power, and it’s heavily recessed into the unit so isn’t that easy to attach.


Where the XL2 does differ from its predecessor is in its interface. This is now the same as the Start2, so much simplified compared to before. Instead of the busy array of icons found on most TomTom menus, the main screen has been reduced to just two large ones plus a strip of smaller ones along the bottom. The two main icons let you Plan a route or Browse the map of the local area. The latter also includes the option to display various categories of Points of Interest onscreen, so you can get a spatial idea of where the nearest petrol stations or cash machines are located. You can then select one and navigate towards it, if desired. However, we found that even with just a couple of POI categories shown onscreen, the map updates were quite slow when scrolling or zooming. 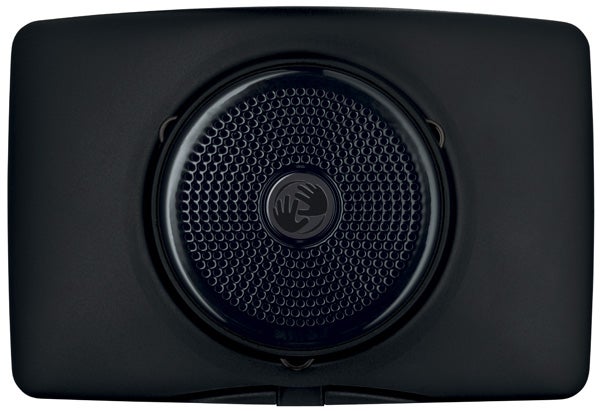 Choosing the Plan route option calls up a more familiar TomTom submenu, however. You can navigate to an address or Point of Interest. It’s possible to save a Home location and a list of favourites, plus there’s a handy record of the last few destinations you navigated towards. Otherwise, you can enter a full UK postcode or drill down from city to street and then house number. However, unlike some sat-navs, there’s no option to search for an address by keyword, so you will need to have a clear idea of your location’s full address, at least as far as the postcode or city where it’s situated.


It is possible to search more generally for a Point of Interest, however. You can’t find a keyword across an entire country, but you can search near your current or Home location, within a city, near your destination, or along your current route. The traditional category-based system is also available, if you’re just looking for a restaurant or hotel, for example, with no particular need for a specific one.

The XL2 uses TomTom’s IQ Routes to calculate which roads to use. So it calculates journey duration based on real historic average traffic speeds for a given time of day or day of week. It may even suggest different routes entirely, avoiding choices where roads are regularly jammed. 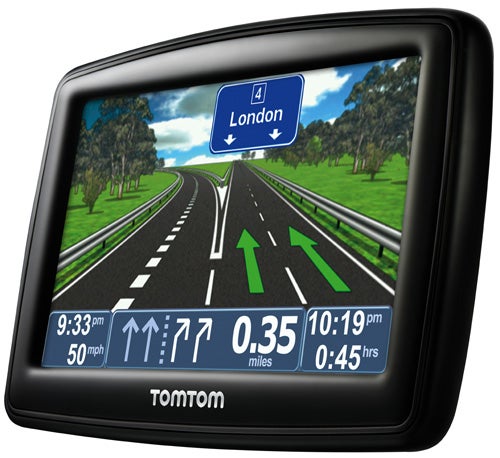 The secondary row of icons includes a few prosaic necessities such as turning sound on and off and toggling night mode. Like the Start and Start2, the XL2 doesn’t switch to night mode automatically, neither based on time of day nor ambient light conditions, so you have to do it yourself. Apart from providing access to the XL2’s Options, the most significant of these secondary icons is Help. This provides a host of functions that might be useful if you find yourself in a spot of bother.


The first screen simply tells you where you are, including the full map coordinates – something the cast of ”Lost” could really have done with. From here, you can gain rapid access to a subset of the most useful Points of Interest during an emergency, including garages, hospitals, doctors, police stations, chemists and dentists. So if you have toothache so bad you can hardly drive, you’re in luck. Alternatively, you can simply call up phone numbers for these POIs, plus nearby public transport, vets, and the AA. 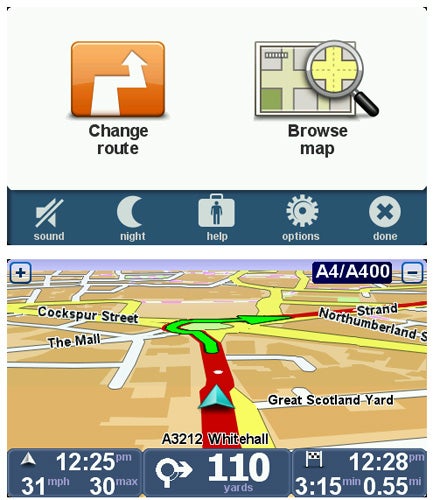 Overall, TomTom’s simplified interface will be easier to get to grips with if you’re new to personal navigation devices. Its paring down of options makes the necessities more readily available, and we have criticised TomTom’s menus in the past for giving you too much to choose from.


When you’ve found your destination, however, the XL2 behaves like most other TomTom devices, with the familiar functional 3D-aspect navigational map. The comprehensive strip of information can be found along the bottom, as always, providing all the data you’re likely to need on your trip. Aside from an icon displaying the next turning, you’re told current speed and limit, time and distance to destination, ETA, and current time. There’s very little else you might need.

The XL2 also offers Advanced Lane Guidance, where a full-screen graphic pops up at complex motorway interchanges, telling you which lane to be in and providing a realistic depiction of the signposting to look out for. It’s a near-universal feature in premium sat-navs, and useful enough to be a welcome addition at this price level. Speed camera locations are also included, although if you want these to remain up-to-date you will need to pay the subscription of £19.95 a year. 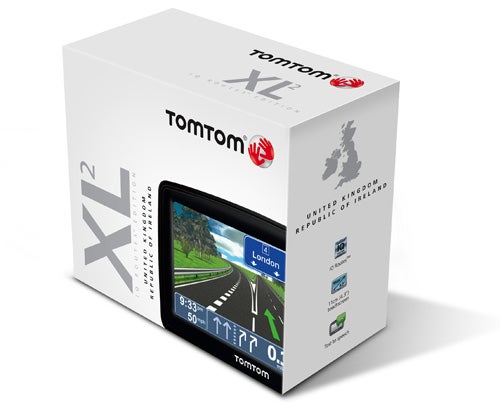 The XL2 also supports TomTom’s Map Corrections system, so you can take note of any areas where your sat-nav’s maps are wrong, particularly speed camera locations. These corrections are then uploaded to TomTom next time you hook the device up to a desktop computer. The release of the XL2 also happens to coincide with the release of some new voices for the spoken commands, including Darth Vader, C3PO, Yoda, and Han Solo, which cost £7.95 each.


Despite the Start2 reducing the cost of TomTom sat-navs that little bit further, the company still hasn’t quite cracked the most value-oriented section of the market. The XL2 is only slightly more expensive, and the extra screen space makes it more comfortable to use. At under £140 for the UK and Ireland version and under £160 for European maps, the XL2 is comparably better value, if you want a bigger screen without paying out for a premium personal navigation device.