What is the TomTom Golfer 2?

The TomTom Golfer 2 is TomTom’s follow up to its original golf watch. Instead of a revamp, it’s more of an evolution, with TomTom adding in automatic shot detection and post-round analysis. If you’re looking for a virtual caddy, this could be the golf gadget for you.

When I first looked at the TomTom Golfer 2, my gaze was immediately drawn to the big button poking through the strap, below the watch face. This makes the device look more like a piece of jewellery instead of a watch. It isn’t a bad thing and definitely helps to differentiate it from competitors.

The button has two important characteristics. It’s used as a directional pad for navigation, and it houses the GPS module to help keep the case’s thickness down to 13.7mm. It also means there are no buttons protruding from the side of the case, so there’s no irritation when wearing the watch and especially when swinging a club. 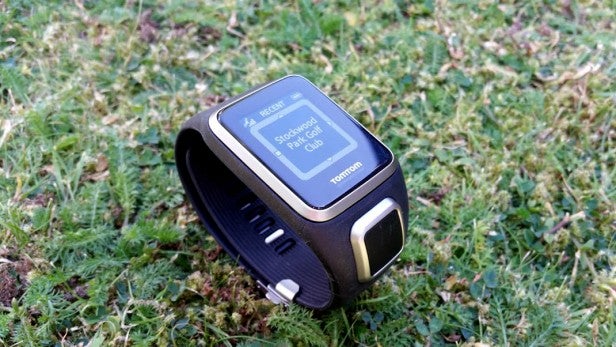 The rectangular monochrome display is reasonably large, measuring 22 x 25mm. It’s not got the sharpest resolution (144 x 168), but it’s decent enough to display numbers clearly. The watch comes in two strap sizes – small and large. I was provided with the large version and, even though I have small wrists, it fit comfortably on my wrist. The folding clasp is solid and I was never concerned that it’d come loose during a swing. 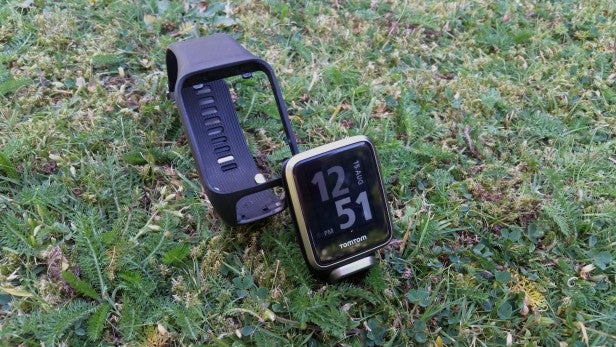 I didn’t realise at first that the watch case actually pops out of the strap enclosure when it comes time to charge it – it’s actually a feature shared with TomTom’s running watches. So if you ever have a problem with the strap, it can be replaced without any fuss. It’s great to see this versatility and it’s executed to perfection here.

Using the TomTom Golfer 2 is easy. It’s advisable to connect the watch to your PC or Mac before you start playing a round to make sure you’re using the latest software. You also have to setup a TomTom MySports account, which takes minutes. 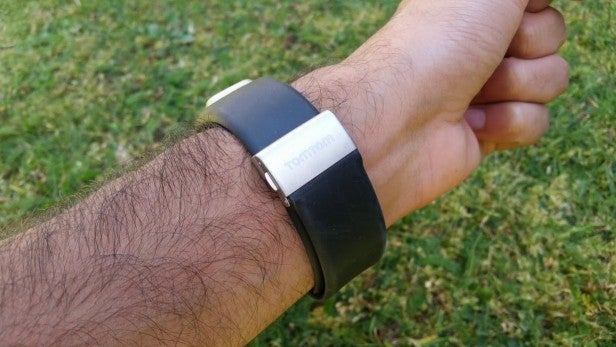 When you’re ready to start a round of golf, all you have to do is press right on the watch’s D-pad. This will activate the GPS and search for the nearest courses. You then select the course you want to play and the device will give you the distances for the first hole.

When testing out the watch for the first time I decided to play with a couple of my friends. I felt like I couldn’t fully concentrate on the watch and I was even paranoid that some of the beeping and buzzing was putting off my playing partners. In hindsight, it would’ve been better to test it out on a practice round alone, which I did the next day.

However, even my first experience was still a positive one. By default the watch showed the hole I was playing and the par on the left in small letters. It also had an arrow at the top showing any bends in the fairway. The rest of the screen was taken up with three large, easy-to-read numbers: the distance to the front, middle and back of the green. For me these were the most useful. 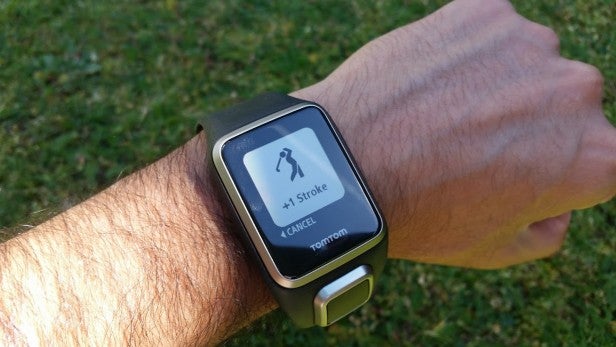 One of the main features touted by TomTom is automatic shot detection. Because the TomTom Golfer 2 is capable of recognising movement in the X- ,Y- and Z-axis via its built-in gyroscope and accelerometer, it can differentiate between regular hand movements such as a wave and a golf shot. For the most part it was accurate. I’d say it correctly recognised nine out of ten shots played, but there was a down side to having this feature activated: it always registered at least one of my two practice swings as a real hit, and the beeping and buzzing was a bit of a distraction.

It’s possible to turn off the buzz at least, which I did during my first round. This still resulted in automatically detected shots when I swung the club, but at least only gave a visual cue when a stroke was added. In the rare case when a shot wasn’t detected, I was able to add this manually by covering the face of the watch with my palm.

One of my favourite on-course features was the shot tracking. After I hit a shot and started walking, the watch started counting the yardage in real time. This gave me a great idea of how far I was hitting my shots during the round, and enabled me to make any necessary adjustments to club selections depending on how far I was hitting the ball in specific weather conditions.

The watch is packed with plenty of other features. Scrolling right when on a hole gives a rudimentary view of the course layout. Covering the screen with your palm from this view provides distances to hazards. This will be most useful for advanced players when trying out new courses. The watch also gives lay-up distances, such as the distance you have to hit before you’re 200, 150 or 100 yards away from the pin. These metrics came in handy for me on the longer par-5 holes by breaking them down into more manageable chunks. 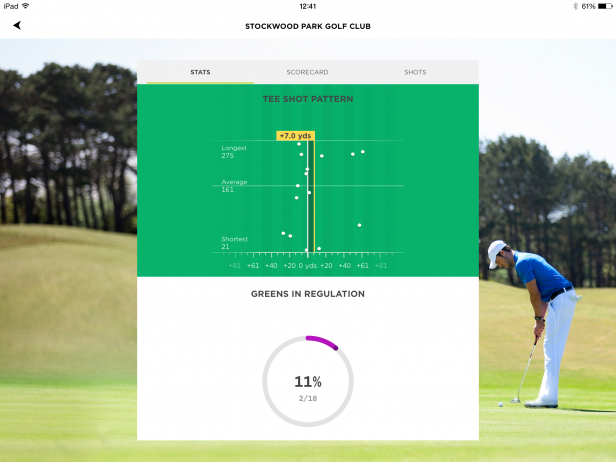 There are a few areas that need improvement. The biggest weakness of the TomTom Golfer 2 lies in the software. The key feature of the watch is that it’ll analyse all the shots in your round and help you see how far you’re hitting the ball, as well as your shot dispersion. While the TomTom MySports app has a clean design, it’s not always able to give you detailed analysis because of poor syncing issues. On Android devices the watch needed to be re-paired every time I wanted to connect. It’s not a major problem, but I had to input a code every time and this is something I shouldn’t have to do. I faired much better when pairing the watch with an iPad, which remembered the connection and became my go-to device instead.

Another issue was the actual syncing of information. I had to be careful that I didn’t pause a round during play. When I did, this messed up the in-app syncing and meant only the holes that were recorded before pausing were synced. Hence I have huge parts of rounds that were stuck in limbo on the watch and wouldn’t sync with the app. 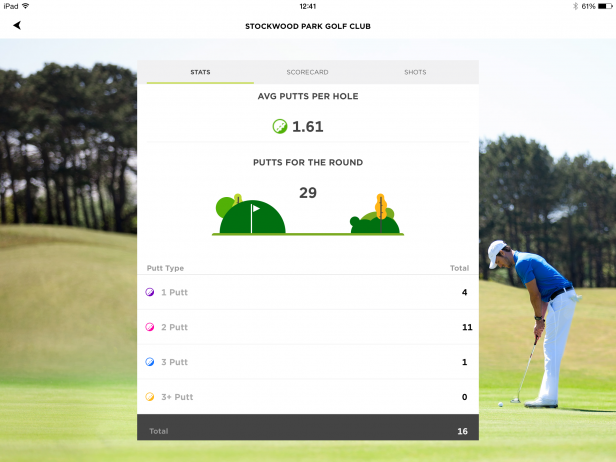 With one of the selling points of the watch being the post-round analysis of shots, this was a big let-down. TomTom is aware of the issue and has informed me that it’s working on software fixes. There’s no specific time-frame, but they should be out before the end of the year.

My final issue is that, when you’re not playing golf, the watch doesn’t really do much apart from tell the time. I was surprised the step counter only worked when I activated a round of golf and it would’ve greatly enhanced the day-to-day usefulness of the watch to have it always on. 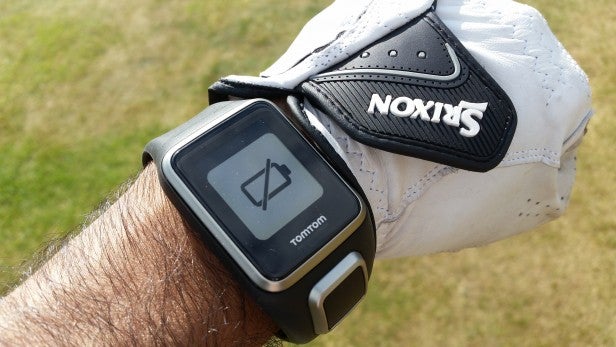 Day-to-day activity doesn’t take up much battery life, no doubt helped by the lack of general activity tracking. TomTom says the device will provide two consecutive rounds on a single charge. This is possible, but you have to take into account that games can be of varying lengths, especially at busy times. When playing one-on-one rounds I found it possible to get two rounds out of the device without any problems.

However, the watch had just over a quarter of its battery left after playing a five-hour round on Saturday. When I took it out on Sunday with another group of three people, it died on the 16th hole. It’s wise to always have at least have 50% battery to be on the safe side. 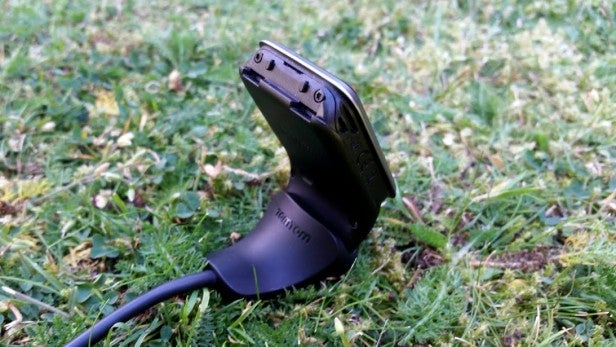 Charging is quick, as the device has its own proprietary connector and you’ll be back up and running in after a couple of hours’ charge.

Should I buy the TomTom Golfer 2?

After playing multiple rounds, I feel the watch is improving my game. I used the TomTom Golfer 2 in a singles matchplay final and I believe the watch played an important role in my win. The distance stats were particularly useful when it came to playing in and around the green. I’ve always found it hard to judge distances of less than 100 yards and this is where it made the biggest difference for me.

The TomTom Golfer 2 is an on-course asset and only software bugs prevent it from receiving a wholehearted recommendation.