TomTom’s LIVE was a revelation when it first arrived a year ago in the shape of the GO x40 series. In fact, it was so groundbreaking that its successor feels like a far more muted affair in comparison. The new GO x50 LIVE range, represented here by the top 950 model, offers much less radical improvements than its predecessor did. But it still has some important new additions to its arsenal.


The device itself is physically the same as before, and uses an identical screen mount and PC docking system as the x40 series. So once you have the car mount attached and wired up, you can slip the device into it without plugging in any other cables. But there are a few changes to the initial map screen. The interface is just that little more pleasing to the eye, thanks to rounded corners to the various onscreen boxes. The traffic strip on the right is slightly easier to read, too, and transitions between interface views are now animated. 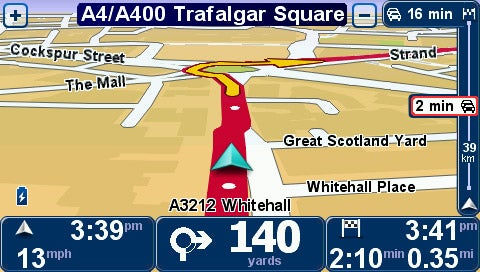 The most major addition here is an icon onscreen offering direct access to the facility to report new speed camera locations. Clicking on this lets you indicate additional mobile and static cameras at your current position, or you can call up a more detailed menu to report recently added average speed sections, traffic light cameras, and toll road surveillance. These reports are then uploaded from the device for checking by Road Angel, which supplies TomTom’s safety camera database. Regular dynamic updates are also one of the services LIVE provides over its mobile data link, so the safety camera database should be as up to date as any currently available. 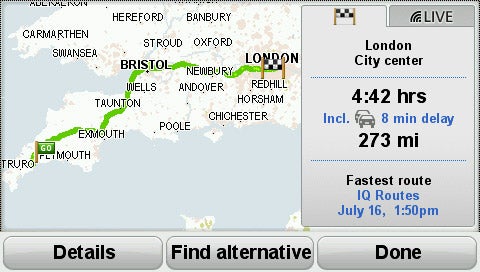 The other major addition can be found when calculating a new route. After the sat-nav has figured out which roads to use, the resulting screen offers a panel on the right with two tabs. The second of these is called LIVE Snapshot, and hosts a trio of LIVE-related information abstracts. These include a traffic summary, the cheapest petrol on your route, and the number of safety cameras you will come across. 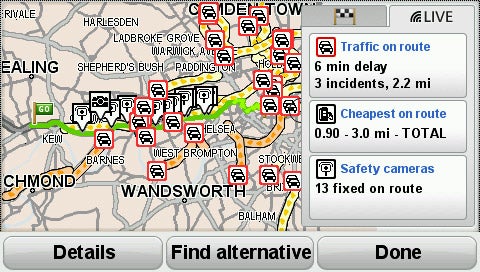 You can click on any of these three to call up more details. The traffic panel shows a breakdown of the delays calculated by HD Traffic and IQ Routes. Alongside this is a summary map of current jams in the vicinity of your route, although a less detailed version is already shown in the main summary display. You can also flip through the various incidents on your route, and choose to avoid them if desired. 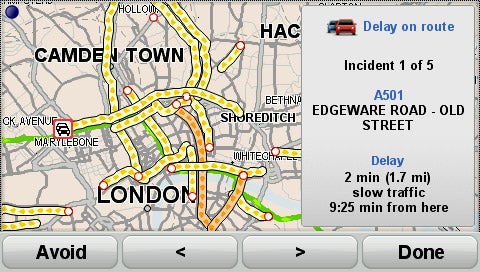 The cheapest petrol section clicks through to the LIVE Fuel Prices menu, where you can locate the lowest-cost filling stations on your route, nearby, in a given area, or you can search by distance or price. Pressing the final LIVE Snapshot section calls up the menu for Safety Camera preferences, which also includes another menu option for reporting safety cameras.

However, apart from these new convenient ways of accessing them, the LIVE Services have not been altered. The main component is HD Traffic, which remains the most significant gridlock information resource currently available. This provides more detailed and more frequent updates than RDS-TMC, and whilst it is less effective in cities, remains the best technology currently available for avoiding jams. 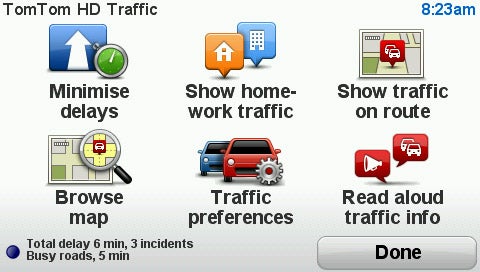 The LIVE-enabled TomTom sat-navs rely on an integrated mobile data link. This provides access to Google Local Search via the device itself, so you can find locations that aren’t listed in the built-in Points of Interest database. We have found it generally very effective. We have already mentioned how LIVE provides more frequent updates to the Safety Camera database, making it more likely that mobile detectors are included. We also touched upon the Fuel Prices system, which lists the petrol costs for filling stations so you can find the cheapest rather than just the most convenient. There’s also a LIVE Weather service, giving you forecasts for your current location or an area of your choosing. The final LIVE function is QuickGPSfix, which regularly downloads a database of GPS satellite locations so the TomTom can lock onto them more speedily. 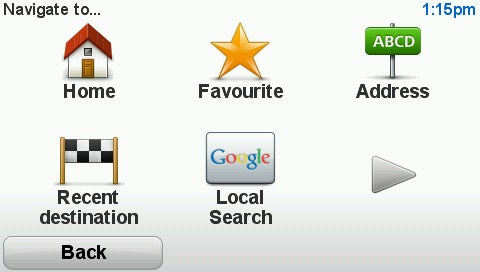 However, just as the LIVE Services themselves haven’t changed, neither has the main reason why you might think twice about getting them: they cost £7.99 a month. LIVE is unquestionably effective, and HD Traffic in particular will pay for the subscription alone in saved time if you have a regular daily commute of any length, or travel a lot for business. But more occasional users won’t find the subscription price so easy to justify. 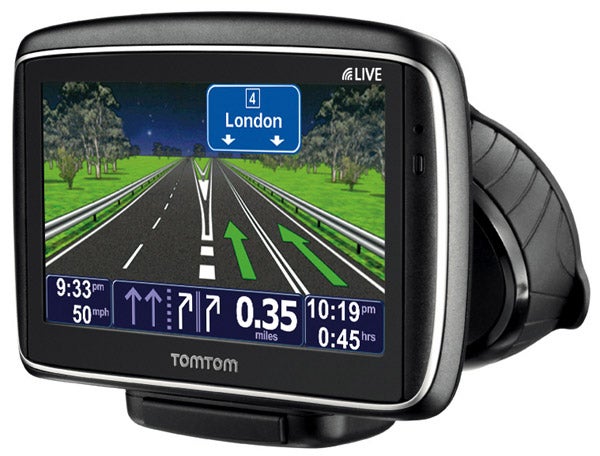 The only major difference here is that TomTom has been promising wider coverage for its LIVE Services for a while, and the 750 and 950 now offer LIVE when in certain European countries. Aside from the UK, support now extends to France, Germany, the Netherlands, Switzerland and Portugal. Not all of these countries offer all of the services, however. HD Traffic and Google Local Search are available in all of them, but Switzerland doesn’t allow notification of safety camera locations, nor are fuel prices included. Portugal is missing the latter as well. Naturally, with UK-only maps, the 550 doesn’t offer LIVE beyond Great Britain.

All of TomTom’s most recent new technologies are in evidence, too. The IQ Routes system is used when calculating journeys, so historic road speeds and traffic black spots are taken into account. This provides a much more accurate estimate of travel times. 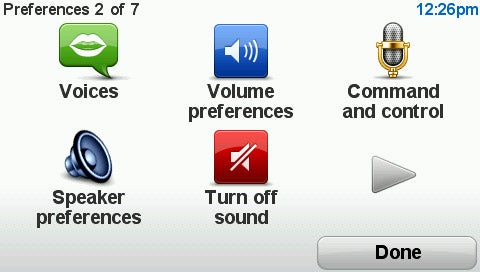 The voice command and control introduced with the x40 series is built in, so you can operate the sat-nav verbally, although this is still not as comprehensive a system as that offered by Garmin’s nuvi 860. The 950 also includes Enhanced Positioning Technology, which keeps your position updated more accurately in tunnels. 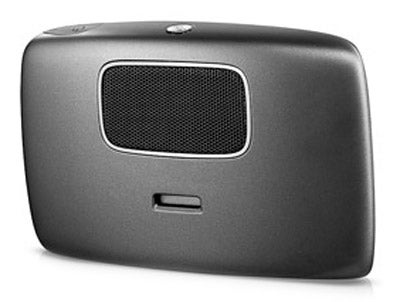 We haven’t yet talked about the map and navigational performance of the 950. But almost nothing has changed here since the previous generation. The maps are clear and functional, with comprehensive journey information along the bottom. Full-screen lane guidance graphics pop up at complex motorway intersections. The only significant enhancement here is to the built-in speaker, which provides clearer audio than previous GOs. 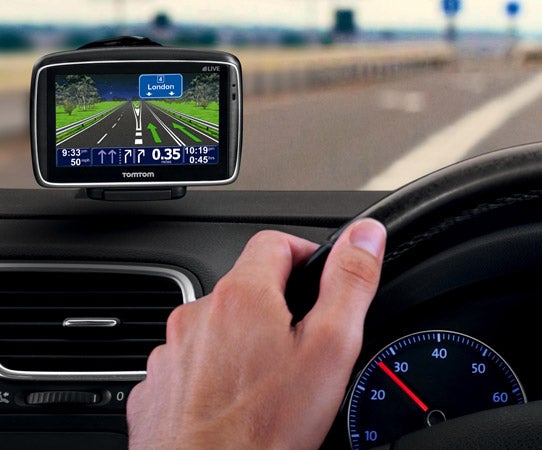 
As we predicted at the beginning of this review, the GO x50 LIVE series isn’t going to change the world of sat-navs in the same way as its predecessor. So if you’ve already invested in a GO x40 LIVE, the new features shouldn’t have you green with envy. If you’re an infrequent traveller, the monthly subscription for LIVE means it remains an expensive option. However, TomTom has significantly reduced the unit price of the device itself, with the GO 950 LIVE being introduced for the same £299.99 as the GO 540 LIVE was a year ago. So if you do regularly drive long distances and are looking for a premium sat-nav to smooth your journeys, the TomTom GO x50 LIVE series should be top of your list.