Any games publisher can give you more of what they think they know you love, but Nintendo does something better: it gives you something you’d never even thought of and makes you love it twice as much.

With Tomodachi Life, it’s done it again. This is a Nintendo 3DS game that makes almost no sense whatsoever on paper. In fact, it barely qualifies as a game. It’s limited in terms of features, and what features there are don’t work in the way you might expect.

Yet Tomodachi Life has my whole family completely hooked. It’s becoming an obsession; the focus of more than one minor squabble and pre-bedtime bans. It’s a hideously absorbing waste of time, and we can’t stop coming back for more. Rationally speaking, it shouldn’t work, but in practice, it definitely does. 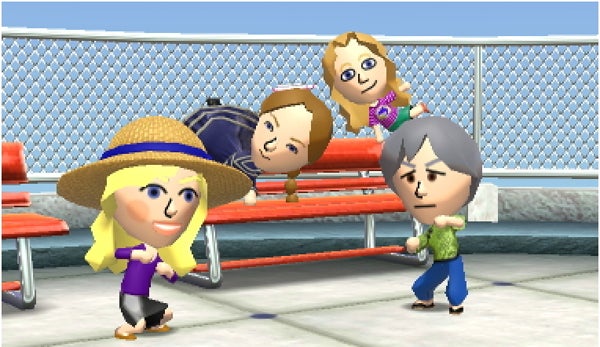 Here’s the set-up. There’s a small island dominated by an apartment block. Your Mii and any other Miis you have registered on your 3DS can move in. In fact, you can make new Miis and move them in as well, either using the 3DS’s camera-equipped Mii Maker (which works from within the game) or the old-fashioned way, from scratch (ditto).

Once your Miis are imported you assign them personalities, through a simple slider-based system that groups them into one of sixteen basic types. Give them a voice, a nickname, a favourite colour and a birthday and you’re done. You can also tell Tomodachi Life of any existing relationships to you as the player, and whether the new Mii is an adult or a child. 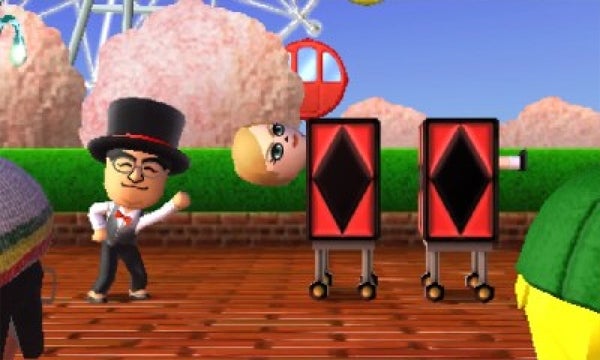 Once they’ve moved in, your job is to keep the Miis happy. They need feeding, though Tomodachi Life doesn’t go in for Sims-style micromanagement, and they all have their own likes and dislikes. They need clothes to wear and a pre-packed interior with furniture and décor. They like hats, and they also like gifts, which range from guitars, books and laptops to a skateboard or a voucher for a pet. You get the chance to give them gifts as they level-up, which happens when you’ve really made their day.

It’s all incredibly simple. You visit the apartment block, check on your existing Miis and see if any have any needs or worries, as indicated by a thought bubble full of crazy lines. You go to the supermarket, the clothes shop, the interiors store and the hat shop, and come back with whatever it is they need.

You then give it to them and solve their problems, and that in turn makes them happier. Weirdly enough, they repay your kindness with cash, which you’ll receive through a daily donation box. You’ll need plenty of it to keep buying more stuff for your Miis. 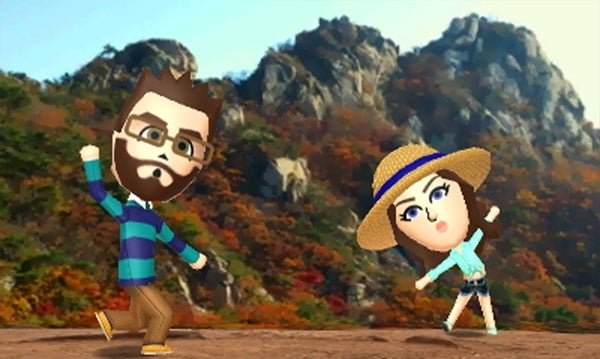 The more you play and the happier your Mii gets, the more resources open up. There’s a beach, an observation tower and an amusement park, where your Miis might gather and chill out. There’s a concert hall where they’ll meet to perform the songs you give them; you can even choose the style and change the lyrics. The town hall allows you to create new Miis, while a port allows you to swap Miis in and out through StreetPass. There’s a ranking board where you can find out which Mii has the most vitality, or which one has the most ‘girl appeal’.

Stop to take notice though, and you’ll soon spot that there’s not an awful lot you actually control.

You can give your Miis the food or clothes or interiors you think they’ll like, and give them advice at key moments. Explore the strange puzzle mini-games, answer bizarre quizzes and enjoy scheduled activities. There’s even a bonkers 8-bit RPG built-in.

Yet what makes Tomodachi Life so oddly compelling isn’t what stuff you can control, but all the stuff you can’t. 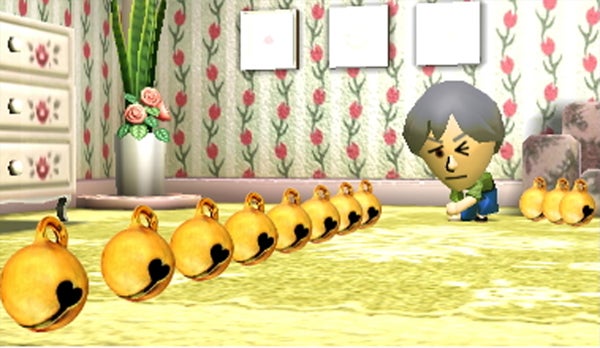 Before you know it, your Miis are forming friendships. They’re meeting up in the game’s various locations. And They’re even falling in love. The game clearly uses what info you give it about existing relationships, but it also goes off in weird tangents, so that you’ll find yourself the centre of a heartbreaking love triangle, while your mother-in-law and Benedict Cumberbatch have become BFFs.

We’ve found it best to play with a mixture of friends, family members and random celebrities, as there aren’t many other games where you’ll find yourself relaxing at the beach with your daughter and Meryl Streep, then engaged in a fraught rap battle with Henry VIII. Interestingly, Nintendo will be adding pre-built celebrity Miis to its Tomodachi website for the game,  accessible using QR codes. 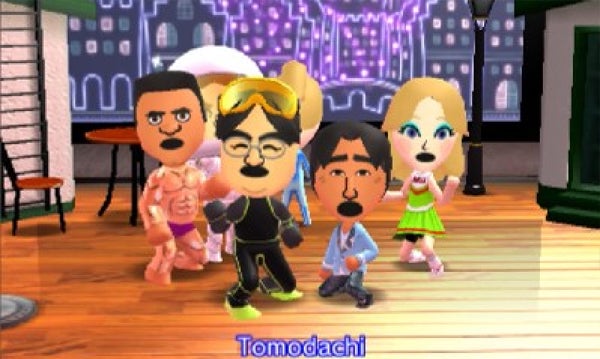 It’s a game that tells its own stories, and those stories might not be what you expect. Your Miis will sing, dance, chat, and play. They’ll mess around with the stuff you give them, and make friendships you’ll never see coming. They’ll have their hearts broken from time to time, though we’ve yet to have anyone seriously fall out.

Tomodachi Life is also occasionally incredibly bizarre, as Miis dream about sentient plates of vegetables or become obsessed with the most unlikely kit and clobber. Who wrote this stuff? The line between madness and genius grows faint from time to time.

Depth? There really isn’t any to be found, and the action is undeniably repetitive. Some aspects are frustrating. Mixing and matching outfits doesn’t seem possible, and this family-friendly game seems understandably reticent to let you chase two romantic partners at once.  Most of all, you’ll often find yourself hankering for a way to directly influence the action, or wondering why one spurned Mii just won’t give up and find there’s more fish in the sea. 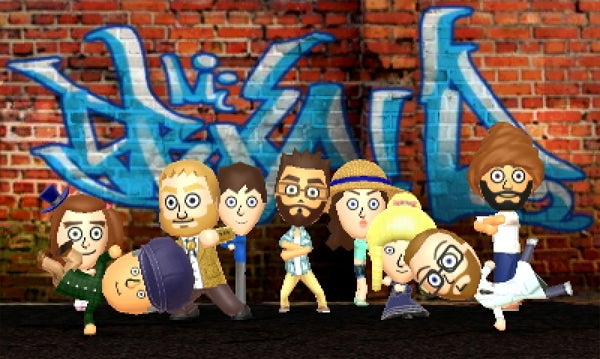 Yet for all these things it’s oddly irresistible. It’s not a game you’ll necessarily play for hours at a time (though it happens) but it is one that you’ll check in with for ten minutes here, twenty minutes there – and often, embarrassingly, much much longer.

It also works as a strange kind of multiplayer game, where you’ll want to grab someone and show them what’s going on, or have them take your island for a spin. It gets everyone staring at the screen. It’s just a shame that social networking doesn’t come built in. You can capture screenshots and share them through the 3DS’s image-sharing tools, but this one begs for a Facebook or Twitter posting option.

Tomodachi Life is more a weird interactive soap than a game, but that doesn’t make it any less compulsive. You might not be entranced by the simple, repetitive gameplay, but you’ll become embroiled in your Mii’s virtual lives, and you’ll be surprised, baffled, boggled and bemused by the whole shebang. If you found The Sims or Animal Crossing dull then it’s not for you – there’s less to achieve and this is even less a game – but for everyone that hates Tomodachi Life there will be others who keep coming back for more.