You already know the story behind this one. Buoyed up by a wave of hype and big-budget movie exposure – and having practically wrung the Tomb Raider franchise dry of its potential – Core Design decided a radical reinvention was due for Lara Croft. The result, Angel of Darkness, was one of the great disasters of gaming history; a game so badly received that Paramount, who owned the movie license, actually blamed it for the poor box-office performance of the second Tomb Raider movie, Cradle of Life. Wary of losing its biggest cash cow, Eidos moved production of the next game from Core to the US-based developer Crystal Dynamics. As this was the team behind the Legacy of Kain: Soul Reaver games – amongst the finest third-person action adventures around – this seemed like a smart move. Then came another. In turn, Crystal Dynamics hired Toby Gard, one of Lara’s original creators, to work with the team on the new game. 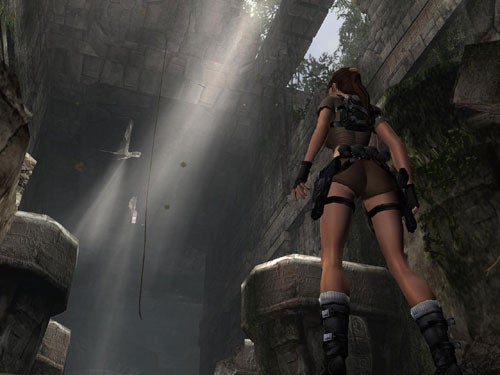 So does this story have a happy ending? Mostly, yes. Without doubt, this is the finest Tomb Raider since Tomb Raider II, and the equivalent of a great Hollywood summer blockbuster – low on real innovation, but slick, enjoyable and packed with pulse-pounding action. Crystal Dynamics has slipped up in a few areas, but – by golly – they’ve got an awful lot right first time.


It all starts with Lara. There is a real sense that Gard and the team at Crystal Dynamics have rediscovered what works about the character, giving her a more modern look, a dry witted vocal from Keeley Hawes, and some stunning new costumes that will keep teenage boys (lets hope not literally) glued to the screen. There are signs of last-gen console origins in the model’s rather angular appearance – a characteristic shared by other characters throughout the game – but this has disguised quite effectively by a healthy lashing of new-generation effects. The luminous skin and the dripping water on the clothes and cleavage stick in my mind for some unapparent reason. Lara’s beautifully animated too. From her gymnastic swings to the sultry way she walks into a party, you can see that the girl has something that pretenders like Bloodrayne or Joanna Dark have never grasped: real personality and class. 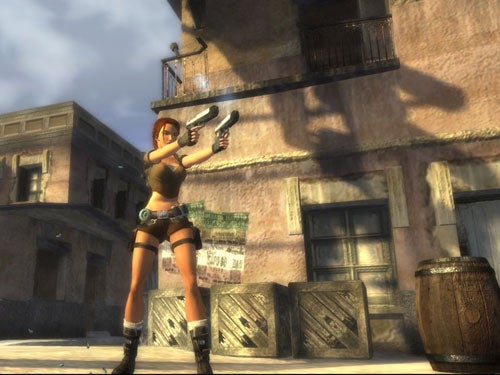 Having made Lara lovable once more, the team then went to work on the movement. Where the old Lara moved in clearly defined blocks, with an awkward turn and then run dynamic, the action always felt stilted. It sometimes felt like you were programming moves one step in advance, rather than dealing with a truly responsive lead character. Cleverly, the new Lara has taken inspiration from the recent Prince of Persia trilogy, running, leaping, clambering, swinging and scrambling with a genuine fluidity, and with some nice touches that can save you from a long and painful fall just when death seemed certain. In fact, much of the ledge grabbing, pole swinging action in TR: Legend is going to seem pretty familiar to those who played The Sands of Time, while her new rope and grapple works in much the same way as the chain-blade in The Two Thrones. 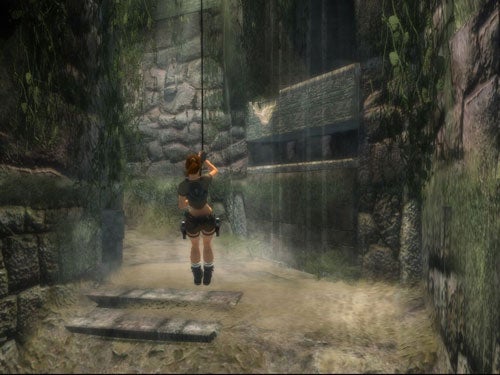 Next – and this seems pretty obvious – Crystal Dynamics realised that Lara is at her best when she’s doing exactly what it says on the tin: raiding tombs. In other words, we get Lara hopping around in South American and African temples, hidden realms beneath the tourist traps of Cornwall, and icy complexes high in the Himalayas. These are familiar environments, full of the gushing waterfalls and monumental bas-reliefs we expect from the series, but they’ve been refreshed by the latest visual technology, with some gorgeous textures and HDR lighting in the Xbox 360 and PC versions for that authentic tropical/African/freezing cold feel. And when the setting takes a more modern turn – in a Tokyo skyscraper or a Russian research complex – the action still stays heavy on the acrobatics.


Maybe the levels are fairly linear, but you can’t argue that they’re short on big moments or grand locations, and each has a look and feel that’s all its own. Admittedly, there were moments when the words “unoptimised code” reached my brain, as the frame rate judders while the view rotates over a large cavern or grand temple vista, but these were few and far between. 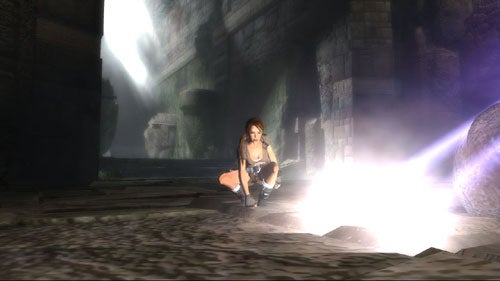 The levels are also cunningly engineered to keep you thinking. As with Prince of Persia: The Sand of Time, you spend a certain amount of energy just pondering the question “how do I get there from here?” but there are also great moments where you’re stringing together moves in a stunning display of grace under pressure. And you’ll also find yourself up to your knees in puzzles. Now, normally I can’t use the words “block puzzles” without a shudder of disgust, but here I’m going to make an exception, for the simple reason that these real-world physics based conundrums are actually fun. OK, so you’re still shifting blocks from one pad to another or rolling balls into divots to activate a door, but the new emphasis on weight, momentum, timing and balance actually makes you stop and think what you’re doing. You’re operating complex mechanisms, not just re-arranging the stone furniture. 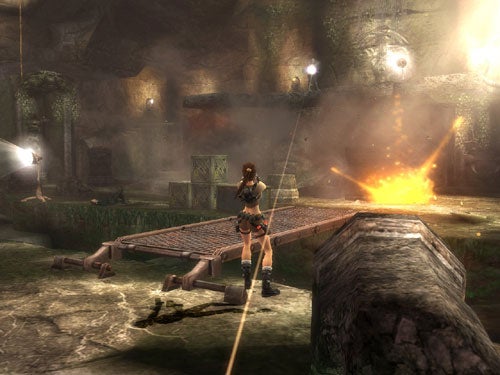 What’s more, you rarely feel bogged down with any one element for long, just because the game is generally so superbly paced. The platform-jumping and puzzling segments are expertly balanced with quickfire gunfights and a handful of other action sequences. The battles show off an effective targeting system and some reasonable enemy AI, and the way you can integrate acrobatic rolls or target explosive barrels keeps them feeling fresh and dynamic – think Mission Impossible II, not Rambo.


The fights aren’t as exhausting, repetitive or annoyingly difficult as they can be in the Prince of Persia games – you might not have the range of Matrix moves the Prince has seemingly on tap, but at least you don’t groan every time you see a pack of goons. There’s a feeling that Crystal Dynamics has taken the John Woo-style gunplay which was one of the few good things about the movies and run with it for the game. 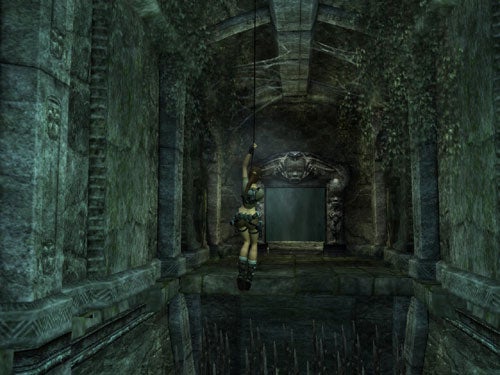 That goes double for the motorcycle chase sequences. Again, they’re the sort of thing I usually dread, but Crystal Dynamics has filled them with just enough action and crazy stunts to keep them feeling lively, without making them an obtrusive barrier to progress. The bike controls well, the jumps are spectacular, and there are some really nice action hero moments. Compare them to the lumpen, thrill-free car chases in EA’s James Bond adaptations and you can see clearly how these things should and shouldn’t be done.


I’d even guess that someone has been playing Resident Evil 4, because we get the same ‘quicktime event’ sequences where Lara only evades a cruel fate if you can press the highlighted button PDQ. Once again, these should be annoying, but they’re not – primarily because Crystal Dynamics has always had the sense to put a checkpoint right before them. In fact, the checkpointing is one of the key strengths of the game. While placing them further apart might have added dramatically to the challenge and the play time, I’d argue that the way they obviate the need to replay large and difficult chunks of game over and over again is just brilliant. Hardcore gamers might think differently, but this is very much a game designed for the widest possible crowd. The good news is that the vast majority of people who pick up Legend should be willing and able to finish it. I can’t say the same for, say, Prince of Persia: The Two Thrones. 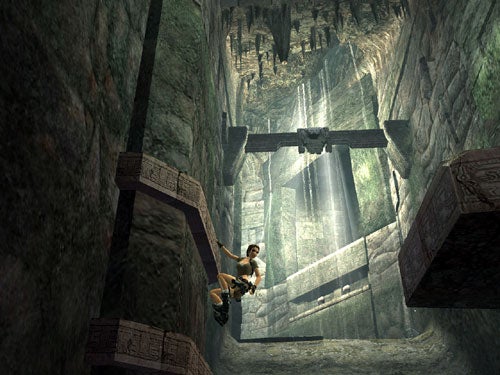 Of course, the bad news is that they will finish it too quickly – I clocked Legend in about nine hours, and plenty of other folks have finished it in less. It’s a shame, because with two major exceptions I thoroughly enjoyed those nine hours and would have been delighted to have another nine without the wait for a sequel. Why, when the game works so well, and when the storyline proves surprisingly engaging, does it all have to end so soon?


Those two exceptions? Well, let’s just say that Legend has been hit hard by the curse of the modern action game: the overly intricate boss battle. I won’t give away details – trust me, you’ll know when you get there – but these encounters not only annoy with their crazy “how on Earth would you think of that?” mechanics, but expose otherwise concealed weaknesses in the controls and auto-targeting. If I’ve only got seconds to pull a lever, it would be nice to guarantee that I could target it first time. Right, Crystal Dynamics? Right?

So Tomb Raider: Legend just falls short of must-have status. Certainly, the casual audience that first made Lara such a breakout character won’t be disappointed, but neither the appearance of collectible bonuses nor the provision of a Croft Manor sub-game where you can hunt down artifacts and parade Lara around in unlocked costumes really make up for the short running time. Having said that, I loved nearly every single minute. It seems doubtful that Lara will ever match her first game for ground-breaking brilliance or impact – nor reach the dizzy heights of Prince of Persia: The Sands of Time – but this game reminds you why she was so special in the first place. If Crystal Dynamics can hold the quality and up the quantity next time around, there’s no reason why this franchise shouldn’t go from strength to strength.


The gaming equivalent of U2’s All That You Can’t Leave Behind or Star Wars: Episode III – a work that’s not quite good enough for classic status but still a fine return to form.