Before last year, who would have thought that Lara’s ten year anniversary would have been worth celebrating? After the uninspired sequels, the movies and the whole Angel of Darkness debacle, it was getting hard to remember what an important game that first Tomb Raider was. Along with Quake and Super Mario 64, it virtually laid down the foundations for true 3D gaming. While its ridiculously well-endowed heroine got all the headlines, Tomb Raider’s biggest assets were actually its groundbreaking graphics and its understanding of the potential of 3D space. Like iD and Nintendo, Core Design realised that 3D could produce awe-inspiring environments, rich in opportunity for daring deeds. More than any other company, Core also understood the cinematic potential of the technology. Who can forget Tomb Raider’s legendary set-pieces? That first swan-dive down the waterfall? That moment when the mighty T-Rex bursts onto the scene? 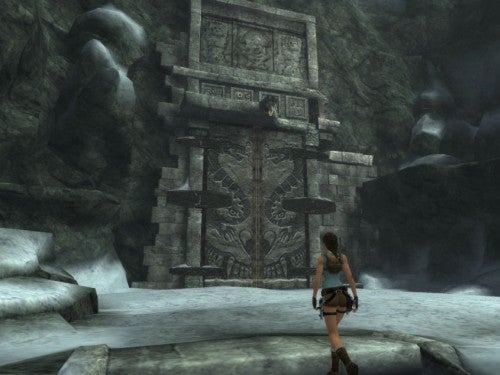 The fact that this tenth – well, nearly eleventh – anniversary remake is getting any kind of welcome at all comes down to last year’s Tomb Raider: Legend. With this ‘franchise reboot’ the team at Crystal Dynamics managed something special – they updated the stale aspects of the series and give it a new cinematic gloss without totally losing its core appeal. The fact that the same basic team – including Lara’s co-creator, Toby Gard – is behind this one-off, celebratory remake offers some hope that Anniversary might continue Ms Croft’s rehabilitation. 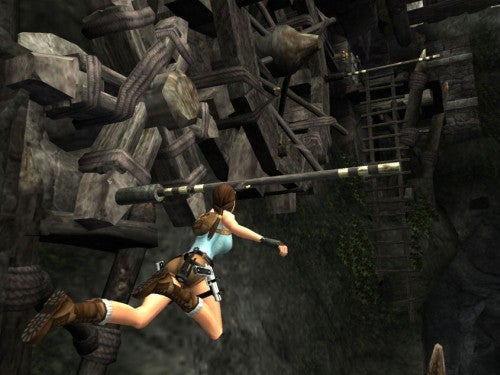 In fact, Anniversary goes better than that: it’s the purest Tomb Raider game in years. Gone are the John Woo gun-battles and motorcycle chase sequences of Legend, Out too are the endless cinematics and constant chatter from Lara’s team. For the vast majority of Anniversary, it’s just Lara, alone against the elements, back to basics: one woman, one tomb, a small selection of critters, and a lot of perilous platforms, traps and puzzles. Some of you might not like the approach, but for those of us who got tired of Lara as the games grew more action oriented – or who feel the first of the recent Prince of Persia trilogy is still the best – it’s music to our ears. 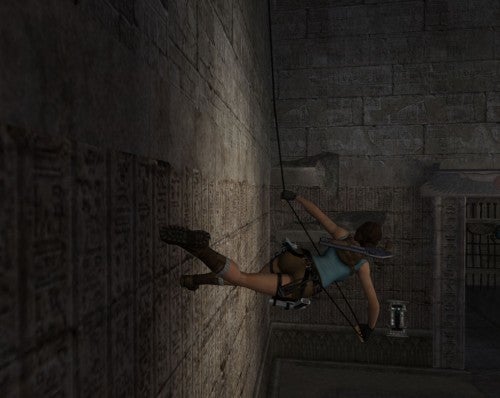 Of course, some things have changed since the good old days. Visually, the difference between this game and classic Tomb Raider is like the difference between Stone Age statues and Renaissance sculpture: Lara is smoother and rounder, the environments are larger and more lushly decorated, and everything looks that bit more natural. Happily, the classic, totally impractical vest and hotpants costume is back, and the Legend breast-reduction surgery appears to have been reversed, but Lara is just as beautifully animated as she was last year. The PS2 version of Anniversary isn’t quite up there with the glories of God of War 2, but it’s certainly not a bad advert for the platform’s continuing existence. The rich textures and lighting effects from Legend make a reappearance, and the water effects have, if anything, been improved. I suspect, however, that Sony’s best-selling console was the game’s target platform; the PC version looks fine, but the bump-mapped texture detail and rich lighting that made Legend’s PC and 360 incarnations so beguiling seems to have gone missing, and some creature models definitely have that tell-tale PS2 look about them. On the PC, anniversary is still a pretty game, but only occasionally is it a stunning one.

Still, what makes the game isn’t the graphics, but the combination of controls and game design. While the classic Tomb Raider rotate, walk and jump control system was a decent solution in the days before analogue pads, it was also extremely restrictive. Often you felt like you were simply programming in commands – run three squares then jump – rather than controlling your character in real time, and many was the time that a poorly timed button press meant a sudden drop to certain doom. One of the pleasures of Legend was that its controls – many clearly ‘inspired’ by Prince of Persia: Sands of Time – made for a more fluid, responsive game, where leaping and swinging your way around the level was one of the big pleasures of playing. Anniversary takes this approach back to re-imagined variants of the classic Tomb Raider levels, reworked so that they give Lara room to use her acrobatic capabilities to the full. 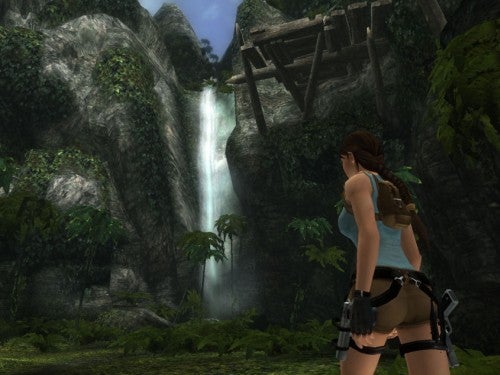 These capabilities include all the jumps and pole twirls introduced by Legend, but also some new moves with the grappling hook. Where there’s a grapple point in a wall, Lara can now throw the hook and run along it with the aid of the rope, racing backwards and forwards if need be to get enough velocity to make the next connection. Lara also still automatically grabs ledges and surfaces on touch (though Tomb Raider purists can switch this off if they prefer). Frankly, the thought of revisiting Lara’s old haunts with new graphics and the new control system would be reason enough for enthusiasts to give Anniversary a punt, but actually its pleasures go way beyond that. 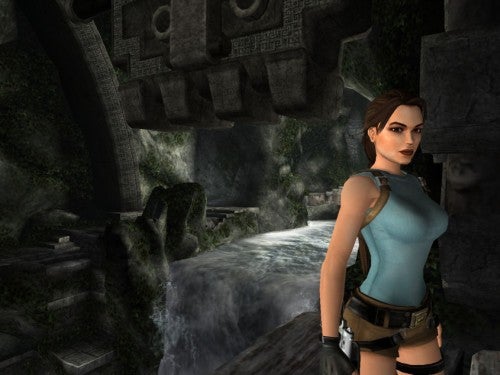 You see, in marrying the basic plot and level structure of the first Tomb Raider to the capabilities of modern games hardware and the new, more flexible control scheme, Crystal Dynamics has produced arguably the finest collection of levels in any Tomb Raider game. You’ll recognise the bare-bones of old favourites – the dripping caves and hidden jungles of Peru, the vertiginous drops of the temples beneath St. Francis Folly – but the nature of the Lara’s trials and tribulations, not to mention the quality of spectacle on offer, has changed dramatically. It’s a perfect mix of nostalgia and new thinking. Think of it like a fantastic cover version: the iconic lyrics and the central melody haven’t changed, but the sound and the harmonies are different, exciting and intriguing. 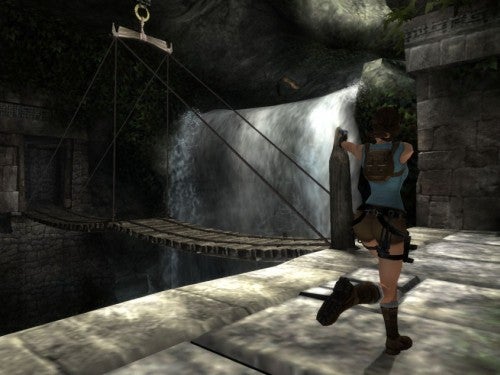 Everything you would expect from a Tomb Raider game is here. There are creature encounters and some fiendish puzzles to get through, those these tend towards the old block and level school rather than the physics based efforts of Legend. However, the game is at its best when it’s stripped back to the bones of what makes a great platformer: impossible traverses where only guts and instinct reveal the next step; huge leaps made with heart in mouth, Lara left clinging by her fingertips to a ledge hundreds of feet above the ground. After God of War II it might all seem a little bloodless, but that’s missing the point: what game since Sands of Time has made getting from one place to another such a consistently thrilling lark?

Anniversary is also a noticeably bigger game than Legend. You could skip through Lara’s last effort in seven to eight hours if you worked at it, but Anniversary is likely to take you at least twice as long. That’s partly because the levels are larger and less linear in nature, and partly because the game is also significantly more challenging. We’re not talking Prince of Persia: The Two Thrones levels of frustration – checkpoints are sensibly placed before any moments where sudden death is a distinct possibility – but there are a few areas where the brutal, frequently fatal trial-and-error experience is back. Expect to spend twenty or even thirty minutes redoing the same section at times. Sadly, there are a few occasions where this is due to the one Achilles heel of the control system – the ‘will it stick, won’t it stick?’ unreliability of the grappling hook – or by a sudden and disastrous shift of camera angle, but this doesn’t happen very often. Most of the time you feel that you can crack each tough bit if only you can muster the skill and discipline required, and the game is always compelling enough to keep you glued. It’s harsh, but fair, if you get my drift. 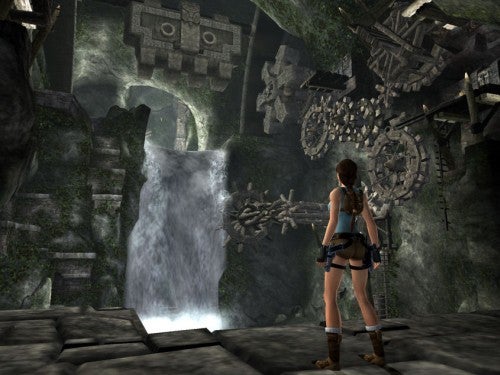 Only once or twice does Anniversary seriously put a foot wrong. The creature AI seems pitifully simplistic, as if nothing has improved in the AI in a decade, and do we really have to have quicktime event sequences in every vaguely cinematic third-person action game going? And why is one of the first game’s crowning glories – the T-Rex – so badly misused? What could have been a fantastic chase set-piece or a spectacular ongoing fight has been turned into a depressingly basic, by-the-numbers boss battle? Didn’t anyone see how well Ubisoft’s King Kong adaptation handled its dinosaur encounters? But most of the time this remake achieves exactly what most long-time Tomb Raider fans would want it to. Even if you don’t count yourself in that number, it might reminds you why the classic platform game – now often described as simplistic, dull or dated – can still be so compelling if it’s just handled right. 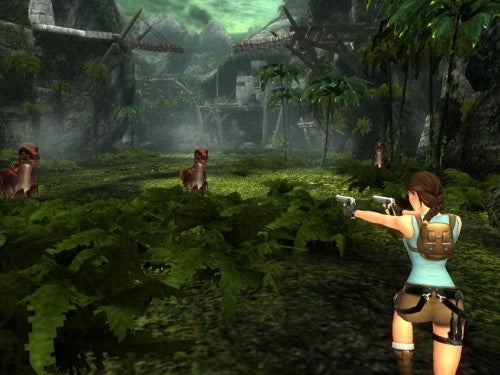 Having played this and Legend, it now seems that Lara has turned a corner. She might have jumped the shark, but Crystal Dynamics seem determined to put things right. If the next Tomb Raider can take the best from Legend – its cinematic qualities, integrated real-world physics and fabulous visuals – and make it work with the rediscovered gameplay values here, we could be on our way to the greatest Tomb Raider of all time. We’ve got our fingers crossed for you now, Lara. Just don’t you dare let us down.


The visuals and controls are modern, but the gameplay is classic, old-school Tomb Raider. The results are determinedly retro, yet curiously invigorating. After this and Legend, another ten years of Lara might not be such a bad idea…