I guess Ghost Recon Advanced Warfighter 2 (GRAW2) had some of the faint praise it’s been damned with coming. First you make a dazzling game that arguably defines what we expect from next-gen gaming, then you follow it up a scant twelve months later with a sequel that – at a glance – looks virtually indistinguishable from its predecessor. Setting the game back in Mexico only makes things worse. Is this really a sequel, an update, a 1.5 revision or just a glorified expansion pack? Can Ubisoft really expect us to cough up around £40 to find out? 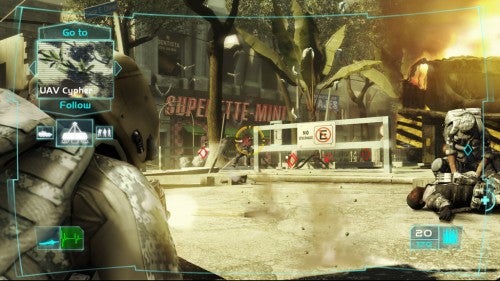 Well, on some of these points I can’t argue. There’s no doubt that GRAW2 looks eerily similar to GRAW1. I’m told that the engine has seen some enhancements, but the simple fact is that GRAW looked stunning a year ago and still looks stunning now, while GRAW2 looks the same with maybe a little, barely perceptible, extra gloss and detail. OK, so it tries to look different. After a brief training session the game proper kicks off in the Central American sierras, giving you ample opportunity to appreciate gentle pastoral scenes of slow-turning windmills, grass and rock – albeit inhabited by tanks, helicopter gunships and bloodthirsty insurgents. Before long, however, you’re back to the city streets, and back to the same effects that hit us last time; heat-haze, blinding HDR lighting, glorious smoke and incendiary explosions, and more textural detail in the average level than most previous generation games delivered in their entirety. Still, old GRAW hands may appreciate one graphical improvement: at least there’s very little sign of tearing. 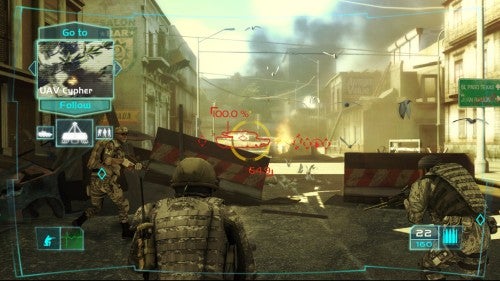 You won’t notice much development in many other areas, either. The interface is broadly similar, and so is the general game style. You control your Special Forces protagonist, Captain Mitchell, from a third-person, over the shoulder viewpoint, and command a squad of three through D-pad commands on the main 3D view or a schematic tactical map. Surveillance drones can also be used to provide live intelligence on the battlefield, and in most cases getting through each mission is a simple case of a) moving towards the objective detailed on your HUD b) using the squad or drones to identify hostile forces between you and that objective c) moving the troops into a position where they can tackle said forces without being blasted into tiny bloody chunks and d) ordering them to open fire while providing what firepower you can yourself. Complete the steps, then repeat for the next objective. Easy stuff. 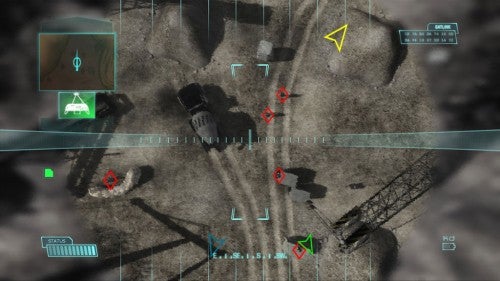 But the key differences between this game and the first GRAW don’t really come down to new gameplay features or visual enhancements. The simple fact is that GRAW2 is the better designed game, all round. In a sense, GRAW1 was all about the technology – what you could do with next-generation hardware – and the fact that the pacing was all over the shop and that it contained difficulty spikes that could make grown men weep hardly came into it. With the technology already in place, the team working on GRAW2 has been able to concentrate on smoothing out these issues and building a more enjoyable experience. 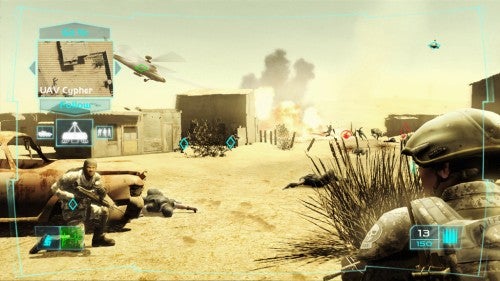 The mission design, better orchestrated in terms of moments of tension and patches of relief, takes much of the credit here, but we should also applaud the introduction of the medic and the mule. The first is a troop who can heal you and your other squad members on the field, and the second an armoured, land-based drone vehicle that, acting under your commend, can resupply and refortify you during missions. This makes the whole thing slightly less demanding (you can almost hear the hardcore whispering ‘dumbed-down’) but also much less of a slog. Gone are the days of dying repeatedly, or of finding yourself at a checkpoint two thirds of the way through a mission with precious little health, meaning you have to restart the mission from the beginning in order to proceed. The AI remains tough and intelligent, but at least it’s super-human. Your squad, meanwhile, seems more inclined to take cover and watch for outflanking targets, and less inclined to get stuck out of cover concentrating on one target while his chums take handy sniping positions around the sides. 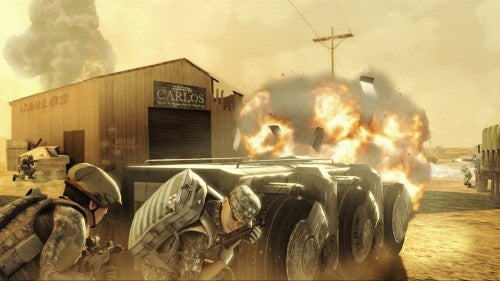 This is a looser, less anal game. It’s more action packed, and even the usual ‘how the hell do I get out of this’ set pieces are more enjoyable. The game actually feels free to take chances, at several points cutting you off from your men, and even from your high-tech toys, to give you a more scary, close-to-the-bone combat experience. Even the on-rails shooting gallery sections are storming. Having been deprived of your best weapons and shot at by hordes of cowardly rebels, nothing says payback better than blasting them and their jeeps from the safety of an armoured helicopter. Let the soundtrack swell up, and enjoy that Apocalypse Now feeling…. 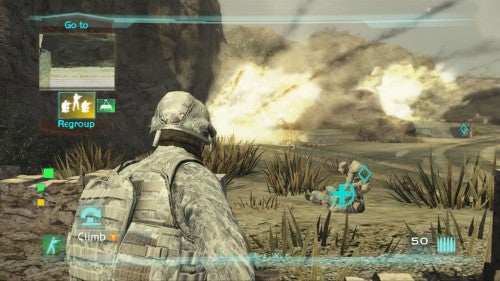 In other words, the single player portion of GRAW2 is totally thrilling, and rarely frustrating. While you can complain that it’s a little short, I’d rather have eight hours of game I love than twelve hours of grudging admiration if half that time is spent grinding away at the same sections over and over again. In fact, if you’re sensible in your choice of difficulty level – not picking the easy option if you’re already an accomplished GRAW veteran – it should last you longer than that. Admittedly, the plot, the voicework and the in-game cut-scenes are ridiculously gung-ho stuff, but there are times when it’s so over the top that I’m beginning to suspect that Ubisoft Paris has tongues firmly planted in cheeks. Team America: World Police has nothing on this bunch. 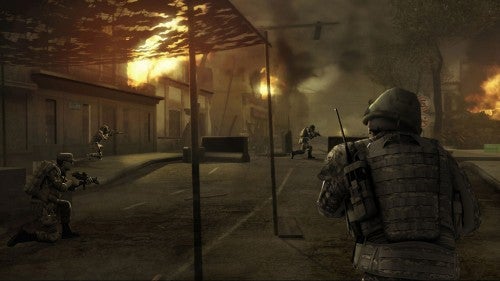 Meanwhile, the multiplayer portion – the bit that actually kept the majority of people playing GRAW1 – is much better tied in this time around. For a start, it actually looks like the same game, not an only marginally related product, and the feel is closer to the single-player experience. While the solo and team deathmatch and battle modes are formidable, and boast some lovingly designed and distinctive maps (love the aircrash site and tumbledown village of Aftermath), the real treat is the co-op mode. Here players join forces to complete one of six, connected campaign missions – distinct from the single-player campaign – and the feel is midway between single-player GRAW and Battlefield 2. The threat of imminent and permanent demise acts as a deterrent against stupid heroics, while the lure of glory is a counter-balancing spur to stick with the team and do your job as a soldier. It can be tough – particularly if you’re left spectating for ten minutes while your team proceeds without your bullet-ridden behind – but it’s also one of the most entertaining offerings I’ve come across on Xbox Live. 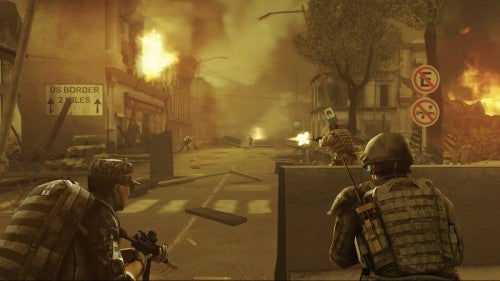 All in all, then, that £40 price is worth paying. Would it have been nice to see a GRAW sequel with even more advanced visuals and a dramatic change of setting? Sure, but that doesn’t change the fact that this is a hugely enjoyable tactical shooter that rivals last year’s Rainbow Six: Vegas for thrills. Call it a glorified mission pack if you must, but it’s the best damn glorified mission pack that this armchair soldier’s ever seen.


In terms of look and feel we’re playing spot the difference, but GRAW2 makes big improvements where it counts. Imagine GRAW with added fun.