It's a delight to see one of the JRPG genre's hidden gems find a second home on Nintendo Switch – and, hopefully, a much larger audience with it. While it doesn't make perfect use of the Fire Emblem and Shin Megami Tensei franchises it blends together, Tokyo Mirage Sessions #FE Encore remains a solid adventure with plenty going for it.

The Wii U was an under-appreciated console. It was certainly flawed in a number of ways, but remained home to some truly fantastic, oftentimes experimental exclusives that you couldn’t find elsewhere. Tokyo Mirage Sessions #FE was one such experience.

Silly name aside, it was a fabulously ambitious crossover between Atlus’ Shin Megami Tensei and Nintendo’s Fire Emblem franchises.

It offered the best of both worlds, with a helpful sprinkling of anime-infused absurdity that embraced Japan’s idol culture in a way we’ve seldom seen in the West. There was a lot to love, so it’s a crying shame so few played Tokyo Mirage Sessions when it first launched. This could change with the release of Encore on Nintendo Switch, an enhanced version of the JRPG that includes previously released downloadable content with a handful of new goodies.

While it doesn’t utilise either of its respective influences to the fullest when it comes to mechanical complexity, Tokyo Mirage Sessions #FE Encore is undeniably unique and surprisingly old-school outing that’s well worth checking out, even if at times its archaic approach can at times outstay its welcome. 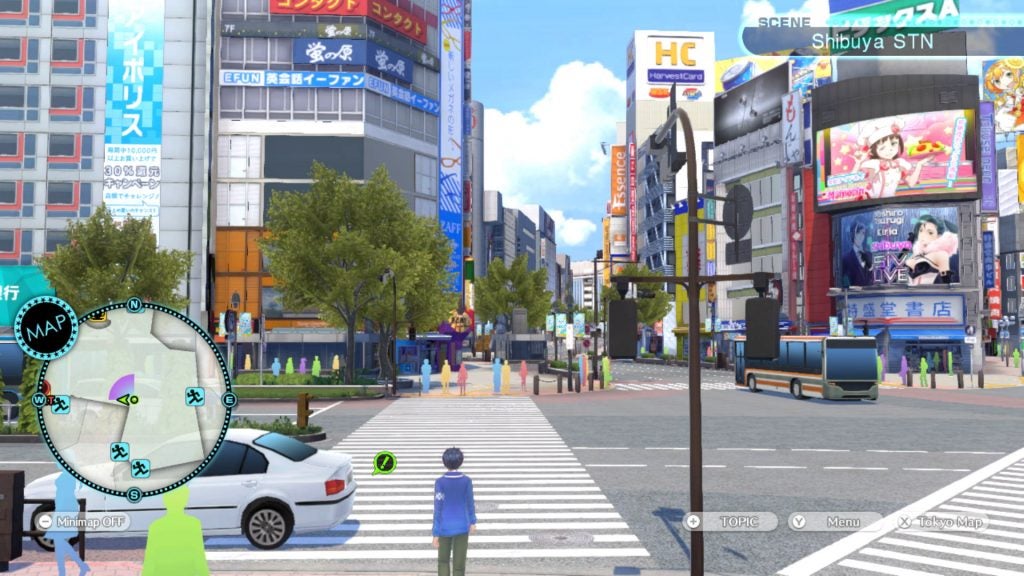 You play as Itsuki Aoi, a high-schooler who finds himself wound up in a talent agency known as Fortuna Entertainment alongside his childhood friends Tsubasa Oribe and Touma Akagi. Starting off as simple entertainers, they soon stumble upon mysterious dimensions known as Idolaspheres. Here, dangerous creatures roam, intent on harvesting the world’s inhabitants of a strange life force known as Perfoma. Obviously, this is bad news – and it’s your job to stop them.

Unfortunately, hormonal teenagers aren’t much use on their own, and this is where Mirages come into play. These ethereal beings take the form of beloved Fire Emblem and Persona characters, assisting you in battle with powerful weapons and abilities. They’re also fully fledged characters themselves, contributing to the narrative in some charming ways as you roam the bustling Tokyo districts of Shibuya and Harajuku.

If you’ve never been to Japan, Mirage Sessions feels like a miniature tour through the capital’s biggest and brightest locations. You’ll walk across the Shibuya Crossing spellbound by its fluorescent lights and never-ending storefronts, occasionally stopping in a few to purchase essential items. It’s a shame the explorable areas outside of dungeons often feel restrictive, gating you with invisible walls that make the world feel like a collection of spaces as opposed to one cohesive whole. 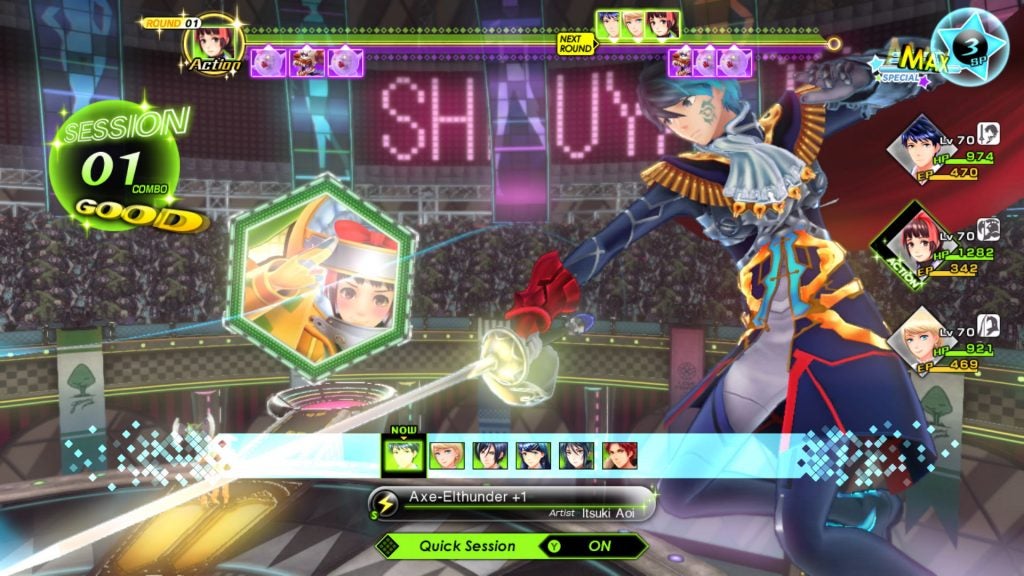 This isn’t the detriment it could have been, largely thanks to how much personality is packed into each and every frame. Occasionally, rough textures are remedied by beautiful character designs and dungeon layouts that surprise at every turn, nailing a wonderful blend of innovation and originality. The Tokyo overworld is used for taking on quests and conversing with characters, whether you’re hitting up a coffee shop in Shibuya or chatting with fellow party members at Fortuna Entertainment.

There’s always something to be doing, although the majority of your time will be spent in the game’s dungeons. Accessed across Tokyo through gargantuan portals, these are multi-layered labyrinths filled with intriguing puzzles you’ll need to navigate. Sometimes you’ll be adjusting the limbs of giant mannequins to reach hidden areas, while others might involve unrolling carpets to navigate precarious gaps in the floor.

All of them challenge and surprise in equal measure, with the aesthetic themed around whatever task you are performing at the time. I won’t spoil any later examples, but one mission has you hunting down a corrupted photographer, the dungeon’s walls awash with lewd images of kidnapped models in desperate need of rescue. However, these are censored in the Western version, as are a number of other things. 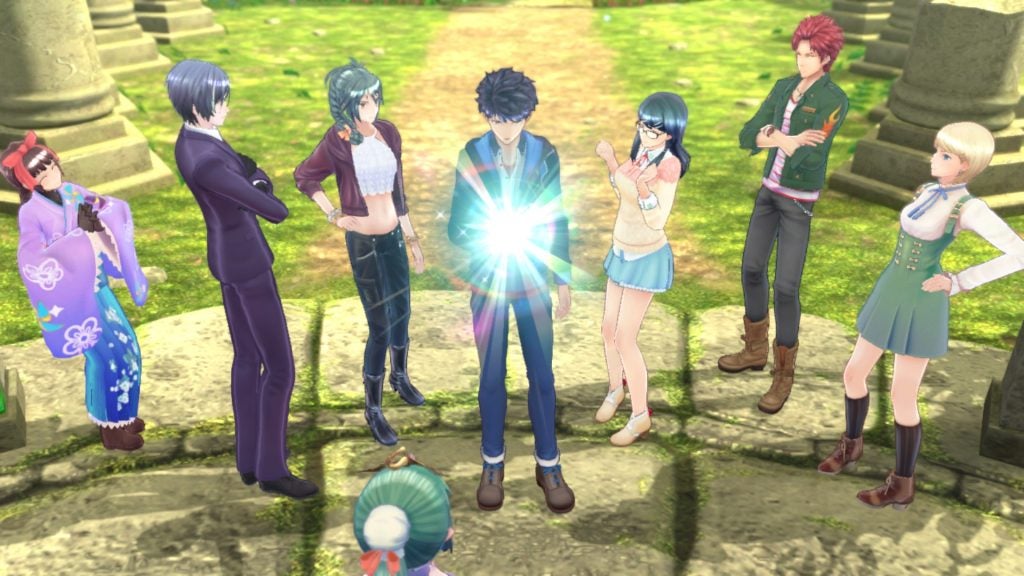 If you’ve played Persona, the turn-based battle system in Tokyo Mirage Sessions will immediately feel familiar; you’ll even recognise the names of certain spells and skills. It’s a crossover after all, so this bleeding effect of mechanics is a welcome sight. As Mirage Masters, you and your party member are capable of unleashing deadly attacks to combat enemies, and finding a weakness will result in Sessions – a sequence of attacks performed by you and your party members.

The majority of encounters turn into a rhythmic exercise of exploiting an opponent’s weakness, and watching as your team puts the smackdown on Mirages. It’s satisfying, yet can sometimes give way to repetition as you’re grinding through dungeons in search of side quests and other objectives. Combat encounters aren’t random, with enemies spawning on the map at a moment’s notice. You can pre-emptively engage with them yourself, or run away hoping Itsuki isn’t caught with his sword unsheathed.

Outside of engaging with spooky enemies, exploring dungeons rides on the laurels of renowned genre conventions, taking the greatest parts of Fire Emblem and Persona before combining them into something new. The narrative conceit of each labyrinth is normally defined by a lesson the characters need to learn, whether that’s learning to love yourself or realising a sacrifice sometimes must be made to care for the ones you love. They’re all beautifully presented, albeit tinged with an expectant amount of anime melodrama. 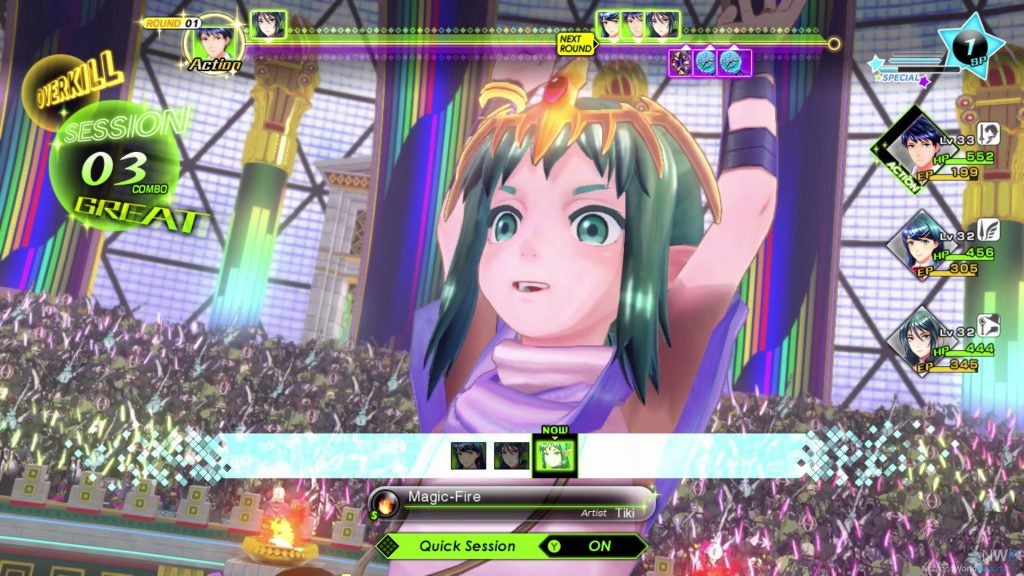 Persona’s mechanic of fusing together different creatures is replaced by the Unity System. Here, you can craft different weapons, which when levelled up, will grant you with new skills and abilities until mastered. It’s both satisfying and easy to understand, although will arguably be too simplistic for genre fans who want something robust to dig into. It’s often a case of revisting Tiki – an adorable young girl with the power of bestowing powers – and purchasing every upgrade before diving back into dungeons every couple of hours.

Fire Emblem and Persona’s love of delving into the lives of characters through bespoke side stories is alive and well in Tokyo Mirage Sessions. In between chapters you’ll be free to take on missions that revolve around party members. While not essential, it’s a brilliant way to learn more about each personality, and I found myself caring about them as a result. Finding a seemingly uptight singer’s torn-up stuffed animal is an early example, a quest filled with quirky dialogue and rewards that genuinely made a difference in battle once unlocked. 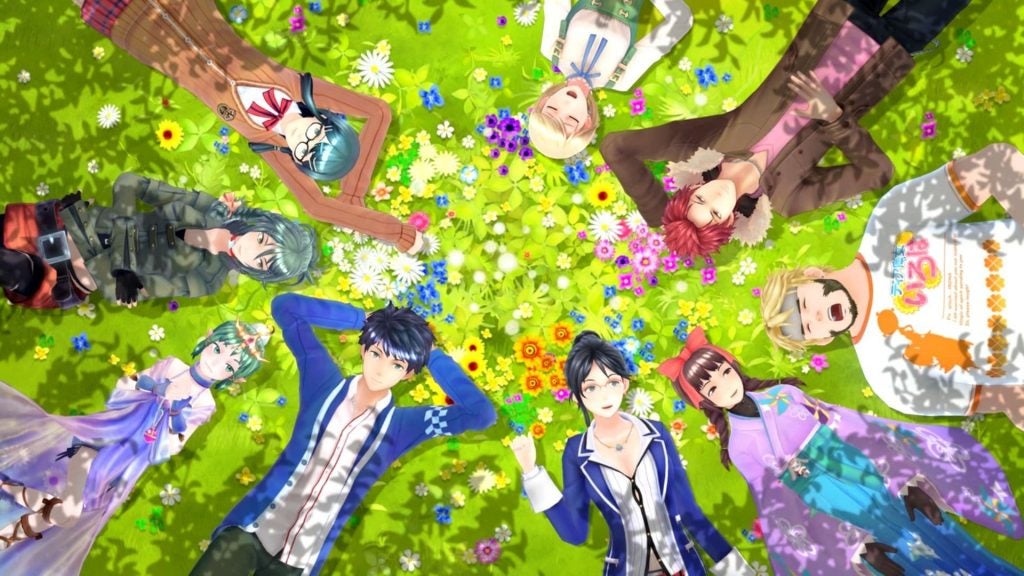 It’s a delight to see one of the JRPG genre’s hidden gems find a second home on Nintendo Switch – and, hopefully, a much larger audience with it. While it doesn’t make perfect use of the Fire Emblem and Shin Megami Tensei franchises it blends together, Tokyo Mirage Sessions #FE Encore remains a solid adventure with plenty going for it.

Players after an engaging battle system alongside cute and meaningful characters will find a lot to love here, especially if a sucker for exploring contemporary Japanese settings. Just prepare yourself for a healthy dose of eclectic imagery and an endless stream of J-Pop.