There’s been a lot of buzz around Tizen since Intel and Samsung took the open source platform based on Linux (and owned by the Linux Foundation) under their wing.

Of course, having big names behind you does by no means guarantee success – just look at the now-defunct Meego platform, backed by both Nokia and Intel. But many major manufacturers view the might of Google and Android as a threat and would like to have their fate in their own hands. Samsung’s support makes sense.

We took a look at the latest Samsung skinned version of Tizen to see how it stacks up not just against Android, but also iOS and Windows Phone.

At first glance Tizen looks like TouchWiz, Samsung’s take on Android. Many of the actions are also the same. Swipe down from the top and you get the notification pulldown, and the back, home and menu buttons are present. However, dig a little deeper and it provides some interesting, and immediately apparent, usability improvements over Android TouchWiz. 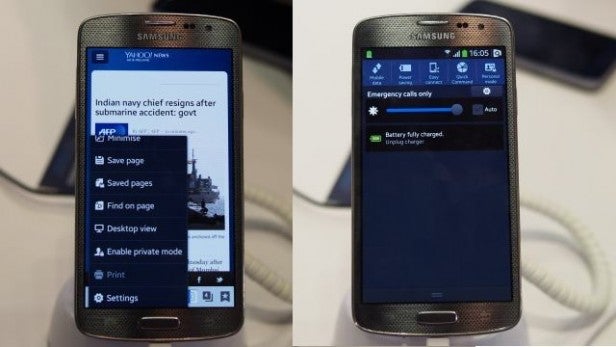 The device I tested Tizen on was a Samsung prototype phone, which did not seem anywhere near as high-end as the Samsung Galaxy S5, or even the Galaxy S4 for that matter. Regardless, zipping through menus and opening apps is quick and slick. The total lack of lag when trying to do simple things like open contacts or make a call is even more impressive.

While I appreciate some of the additional functionality and apps TouchWiz offers, I am regularly frustrated by the fraction-of-a-second delay that comes with using a Samsung Android phone. Try to open contacts or make a call and for a tiny moment you’re not sure your touch has registered. It may seem a small issue but the responsiveness of an iOS or stock(ish) Android device really hammers the delay home. Happily, Tizen seems free of this issue,

Without knowing the full specification of the demo phone, it’s hard to assess the performance of the games we played. The Samsung prototypes could have been packing Intel chips – bearing in mind the Samsung/Intel/Tizen collaboration, but regardless a 3D demo of a Formula One title looked good and ran smoothly. There was also no apparent problems with a HTML 5 Wipeout clone.

Tizen – or at least Samsung’s version of it – seems to offer the best of both worlds. The performance of stock Android is there, but then you also have a slew of features and usability enhancements that put it, at first glance, streets ahead of Android, Windows Phone or iOS.

First is the tile-like interface that lets you add widgets to your homescreens, which automatically update. So far, so Android and Windows 8. However, swipe down on some widgets and they expand, offering more details about a news story, for example, or the ability to move to the next item. Want to scroll through the latest Tweets without opening the Twitter app? No problem, Tizen lets you do just that. Tizen calls these “Dynamic Box” apps and they can also be shrunk to the size of an app icon or expanded to a size that suits you. 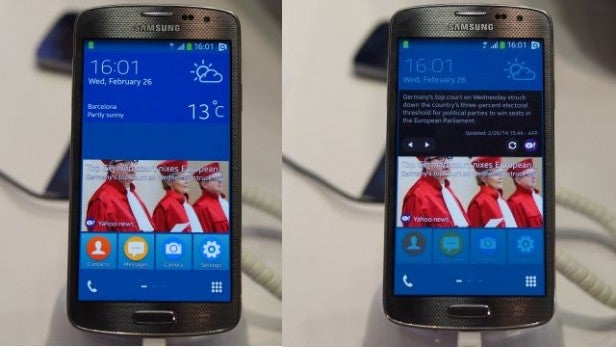 Swiping down on some Tizen apps offers more info and controls

Remember Pen Window in the Galaxy Note 3 and Galaxy Note 10.1? Very similar functionality exists in Samsung’s version of Tizen. You can open “Mini Apps” in a small window on a home screen, or while using another “normal” app such as a web browser.

I tested the video player mini app and it worked well, offering a small video that I could move around or make bigger by dragging a corner. Quite how useful this would be on a phone with a screen that is smaller than six or so inches is debatable, but I can see how it would be handy on a 7-inch tablet. 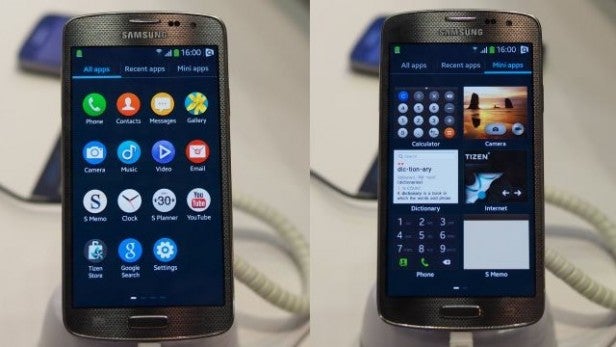 Mini Apps are a Samsung addition to Tizen, and it suggests the Korean giant is serious about the OS.

Potentially of less use is the ability to create personal profiles for your phone. This doesn’t mean creating profiles for multiple users, but having different set-ups for different situations. So for example you might set-up a profile for use at work, which may have your calendar of daily meetings and emails front and centre. Once you’ve left the office you could switch to a more media-friendly or social profile. The profiles are easy to set up and switch between, but I’m not sure quite how much use they will be of to the majority of people.

There is a Tizen app store, but this isn’t yet available to the public. Instead Tizen is currently accepting app submissions from developers. It claims the platform “draws strong interest from the app developer community” but until we know how many apps will be available at launch, as well as their quality it’s hard to gauge how far behind the competition it will start. 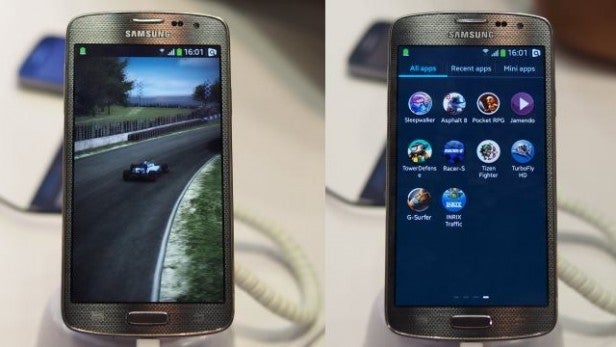 One very promising sign is that the app developers we spoke to think porting from Android or iOS to Tizen is a doddle. Przemyslaw Marszal from Polish company 11 Bit Studios, best known for the popular Anomaly games, said “it only takes us about a day to port from Android to Tizen – it’s very simple”. We saw Anomaly 2 running on an older prototype Samsung Tizen dev phone and it ran as smoothly as it does on my iPhone 5S or Galaxy S4.

So far so good. Tizen has matured as a mobile OS but we’re yet to see how it performs scaled-up to a tablet experience. We expect it will be very similar to Android – works well on smaller form factor 7-inch devices, but creaties a somewhat compromised 10-inch experience when compared to iOS and apps specifically designed for tablet use.

On a smartphone, though, Tizen is slick, easy to use and offers more homescreen functionality than iOS, Windows Phone or Android. But it’s the Android user who is most likely to be targeted by Tizen devices, simply because the software feels and works in such a similar way.

With Samsung adopting Tizent as the OS for its new Gear Fit it only seems a matter of time before we see the first Tizen smartphone hit the shelves. Don’t expect a flagship device, though. The likelihood is we’ll see a low to mid-range low cost offering to test consumer appetite and reaction.

Next, read what we thought of the Jolla Sailfish OS phone