What is the Tivoli Andiamo?

With its usual fare of tabletop music systems and Wi-Fi radios, Tivoli isn’t a name you’d normally associate with portable audio. But with Bluetooth speakers seemingly flying off the shelves, the company has created the Tivoli Andiamo in an effort to get in on the action.

It’s the first in a range of portable Bluetooth products, and if everything battery-powered Tivoli makes turns out to be as good as the Andiamo, then there could be even better to come. It’s pricey, though, and it’s lacking some features you might expect from a Bluetooth speakerg. So is it really worth the not-insignificant cost? 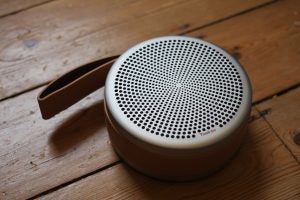 Andiamo means “let’s go” or “come on” in Italian, so it probably won’t come as a huge surprise that this is a speaker designed to be carted around.

That said, it’s pretty chunky. It’s about the size and shape of one of those old-school alarm clocks minus the bells on top, and weighs in at 720g, making for a hefty old bang if you drop it. Fortunately, it comes with a handy strap, allowing you to easily carry it from A to B. There’s a real high-end B&O vibe to the unit, although it also comes in black for any goths out there.

The tan leather band on my review sample wraps around the entire circumference of the Andiamo and includes all the buttons, an aux-in port and the hole for the charger – so there’s no waterproofing here. Annoyingly, the Andiamo also uses an old-fashioned 12V mains charger, so you’ll have to remember to take that with you if you go away, rather than relying on a generic USB charger kicking around.

The Andiamo is simple to operate, mainly because there isn’t much to control. Once it’s powered on and the blue light stops flashing, it will let out a slightly unfriendly beep to let you know your Bluetooth source is connected. Now with the buttons you’ll be able to change the volume, turn off the speaker, or put it into pairing mode to connect a different device.

The volume controls are independent of the volume setting on whatever you’re playing music from, which can be a little irritating. But this is very much a first-world problem, as is the fact that you’ll need your phone to skip tracks. 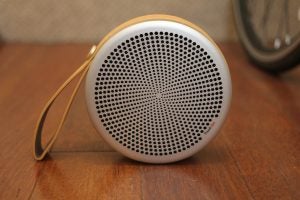 The Andiamo’s relative girth comes from having one 2.5in, 20W full-range driver and a 3in passive driver inside. Its larger size isn’t only beneficial when it comes to playing music, but also means you get a battery big enough to offer a pretty hefty 20 hours of playback.

If left alone without anything playing, the Andiamo will go into a standby mode – not turn off completely. I accidentally left it on for a few hours one day and it had a fairly significant impact on the total battery life, so it’s wise to remember to turn it off fully when not using it. There’s no sign that the battery is low, other than the power light turning red, so you do need to be quite vigilant to avoid getting caught out.

Compared to other Bluetooth speakers at this price, the Andiamo is perhaps a little lacking when it comes to extra features. There’s no built-in support for your phone’s voice assistant, for example, and no accompanying app that allows you to pair a second speaker or adjust the EQ. But for most people, all of that’s secondary to sound quality, and the Andiamo certainly isn’t second best when it comes to pumping out a tune. 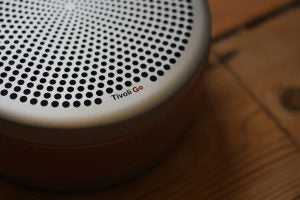 Play some music through the Andiamo and the first thing you’ll notice is the size of the sound. It’s big and authoritative for its size, although lacks the outright power that something larger would provide.

The next thing you’ll probably hear is what you might initially mistake for distortion, but on closer inspection you’ll discover it isn’t actually coming from the Andiamo at all.

With the speaker placed in the middle of a coffee table, using Spotify to play Flying Lotus’s ‘Auntie’s Lock/Infinitum’ at just over 50% volume, my coins and keys werer rattling, TV remotes dancing across the surface, and a gentle rumble passed through the floor beneath. The same happened with Kaytranada’s ‘Glowed Up’ and Earl Sweatshirt’s ‘Huey’. 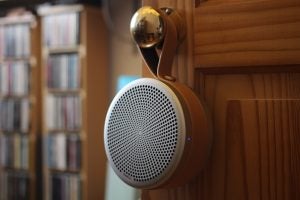 Those are songs with fairly incessant basslines and it isn’t the sturdiest table in the world, so I tried ‘Smoke Signals’ by Phoebe Bridgers instead and the 3in passive radiator still – quite literally – made its presence felt. There was much less rattling, but the vibrations were still there. Basically, you need a solid piece of furniture on which to put the Andiamo if you don’t want regular glass-of-water-in-Jurassic-Park moments.

When you do that, though, the Andiamo really shows what it can do. The bass is punchy and rich without being boomy, although it can sometimes overwhelm the mid-rang. Pick it up and it will lose some weight, but people only hang speakers on vintage bike handlebars in the lifestyle photos that manufacturers shoot for the website, right?

Detail and clarity is a cut above other speakers of this size. Vocals sound particularly natural, and the rustling noises in C418’s Minecraft soundtrack are so lifelike you’ll be checking any nearby bushes for eavesdroppers.

Bluetooth range isn’t amazing – I had it start to splutter and cut out if I took my phone more than about 10 metres away. However, in real-world use that isn’t a massive issue. If you stray much further away than that you won’t be able to hear it properly anyway. 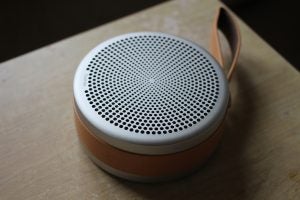 Why buy the Tivoli Andiamo?

It’s hard to find something this portable that sounds this good, but the Andiamo isn’t as hardy as other Bluetooth speakers out there. It feels sturdy enough to survive some rough and tumble, but without even a hint of waterproofing, you’ll need to be careful if you’re using it outside.

It looks great, though, so perhaps you’ll be buying it more for those luxurious Italian city breaks rather than five days in a field during the British summer. In which case, its excellent performance will no doubt impress your fellow hotel guests – although the rumbles it gives off might irritate your immediate neighbours.

The Andiamo looks good and sounds even better – just don’t spill your drink on it.