Titan Quest is, I’m increasingly convinced, something of a gaming inevitability. Everyone owns or will own a copy, whether they realise it or not – I’ve even got a copy on Steam I don’t remember ever buying. Originally released on PC back in 2006, it’s since been re-released in anniversary edition form, ported to PS4 and Xbox One, and now arrives on Nintendo Switch, making it borderline unavoidable.

The problem is, avoiding it may be the best option. This is a sloppy port riddled with questionable design choices – if not outright bugs – and ultimately proves less than suited to Nintendo’s hardware.

Starting in Ancient Greece and taking players through Egypt and China, this action RPG charges you with preventing the Titans of myth from being released from their imprisonment, which would lead to the end of humanity. It’s a fairly undemanding storyline, dripping in Grecian myths and figures, though the main quest is expanded upon with numerous side quests dispensed by incidental characters.

You’ll create your own character from scratch, selecting gender, name, and base garment colour, then set out from the starting village of Helos, currently under attack by satyrs. After levelling up the first time, you’ll choose a mastery – a specific skill set ranging from the militaristic Warrior, to the ethereal, dream-walking Seer – that allows you to purchase new abilities as you continue to level up.

At level eight, you’ll be able to add a second mastery, letting you combine skills. You can also equip two weapon load-outs, swapping between them on the fly with a tap of the B button. The character progression system is one of Titan Quest’s best elements, allowing you to build and develop a truly unique character. 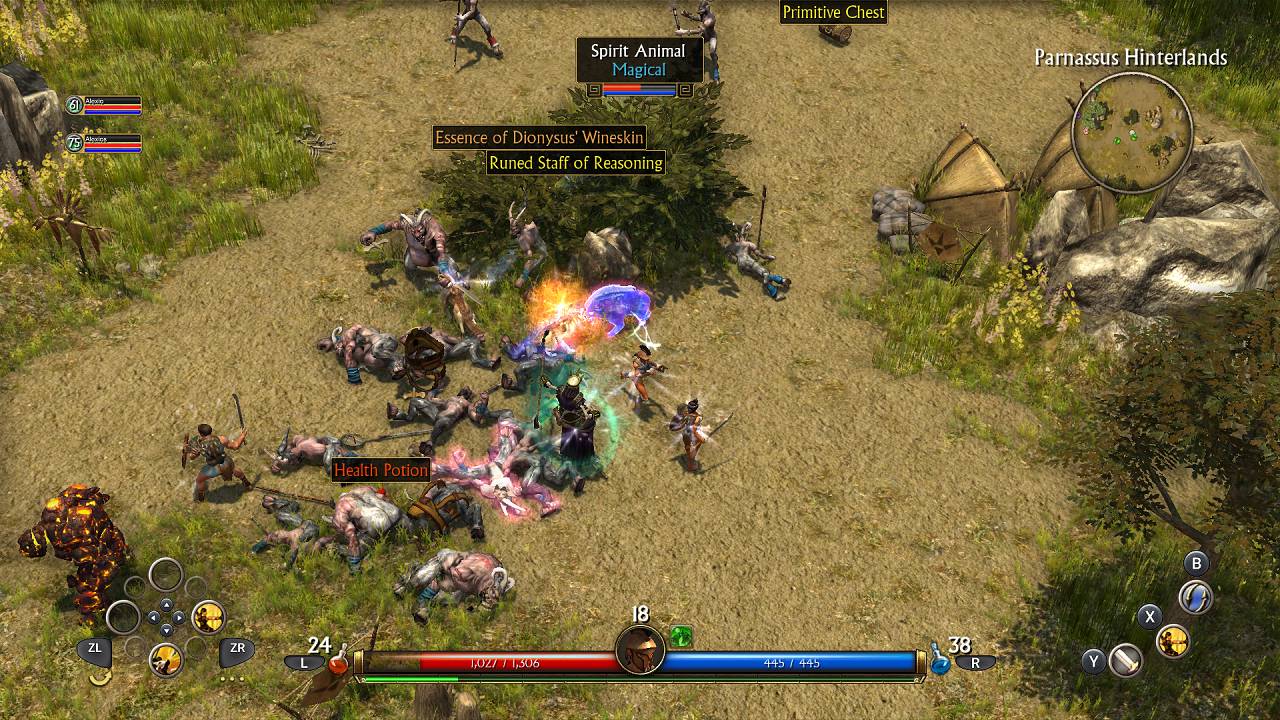 Personally, I leaned into elemental domination and built a pyromancer packing stormcasting abilities. Unfortunately, that’s when I encountered the first of Titan Quest’s many balancing issues. Magical abilities, meant to drain a bar meter of energy on use, instead appeared to stay permanently active.

This made me wildly over-powered – I could lob a fireball at an enemy from afar and just wait for it to burn the HP right out of the monster, or imbue a cleaver with flame and hack away at minions while having an active fire aura burning them when they even got close. And yes, that’s fun, but it’s also broken, and robbed the game of any real challenge.

This bothered me so much I reached out to publisher THQ Nordic to see if it was, in fact, a bug. They responded, saying “it’s actually a feature! The flame buff actually has mana/second cost, but the mana regeneration should be quicker than that, that’s why it looks like it has no cost.” Not a bug, then, but a severely imbalanced bit of design.

That’s not to say Titan Quest is devoid of bonafide bugs though. Some I encountered include: enemies getting wedged in the environment, making them impossible to hit; artifacts popping in after you’ve interacted with them, or armour and weapons remain floating in the air once you’ve defeated an enemy.

Then there are the issues with the game where I honestly can’t tell if they’re bugs or bewilderingly ill-thought out features. The mildest offender here is the speed at which dialogue text from NPCs appears in their chat bubbles being significantly slower than their actual rate of speech – you’ll have heard their entire spiel before the text has gotten halfway through. More frustratingly, in combat there appears to be no way of selecting which enemy you want to attack.

The game auto-selects targets, but there’s no logic to it – rather than attacking the grunt immediately next to the one you’ve just felled, you may find your character running to the other side of an enemy encampment because that’s where the game has decided your next opponent is. It’s immensely annoying, and the semi-automated nature feels like the game is playing itself.

Even ignoring the targeting issues, combat itself is repetitive, bordering on dull. Simply approach enemies, hold down or tap Y, and you’re done. There’s practically no skill or tactics involved, and if your two weapon loadouts consist of one set for long range and one for melee, you’ll be good to tackle anything the game throws at you. Between the ‘infinite magic’ bug and the basic combat, the only times I died playing Titan Quest was when I got bored enough to look at my phone while fights happened on screen. 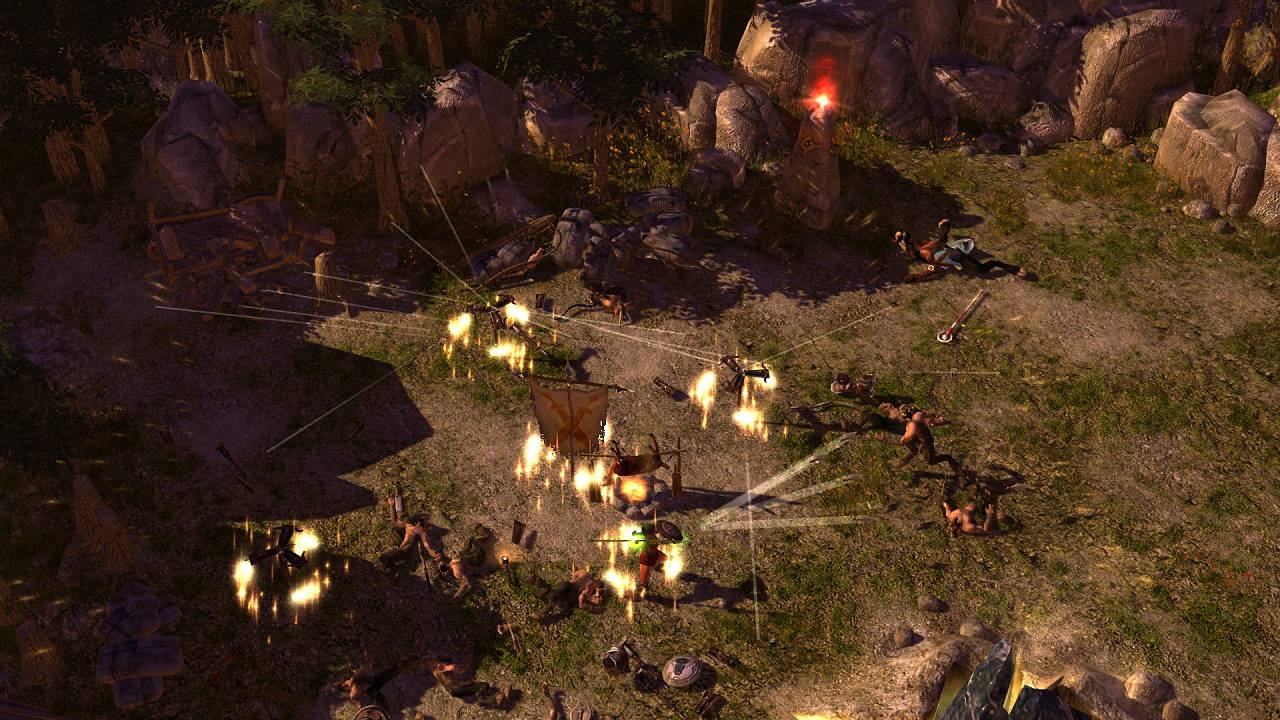 There’s depressingly little variation in monster types, too – several hours in, you’ll still be hacking your way through hordes of satyrs (or sometimes, to mix it up, dark satyrs). This problem is compounded further by the game being ill-suited to the Switch’s screen. Given the top-down style of the game world, you’ll mostly want to have the widest possible zoomed-out view, but the figures, buildings, and items that populate Titan Quest are so small as to be indistinct at that distance. This isn’t too bad if you’re playing with the Switch docked and pushing out to a TV, but in handheld mode, everything is eye-strainingly tiny.

That in itself is a shame as, zoomed in, Titan Quest looks rather nice. The remastering process means it benefits from richer textures and deeper colour, bringing the ancient world to life, while detail on your character’s armour and accoutrements makes them feel more rooted in the setting. The inability to enjoy all this when actually playing feels like a metaphor for the game at large though – at a glance, it looks great, but take a wider view and its problems are all too apparent.

Ultimately, this is a 12-year-old game, and no amount of spit and polish can overcome the dated mechanics and repetitive combat that lies at its core. Any returning players may appreciate the ability to revisit this ancient fantasy world while on the go, but the buggy presentation of this port and the indistinct detail when zoomed out robs it of even that small pleasure. An exceedingly lacklustre presentation of a once-great game.