If there’s one thing the rise of the smartphone has done for the world of games, it’s give everyone a go. Now anyone from a one person band to a 200 strong studio can put together something for iPhone or Android, opening up the world of games development to masses it simply never reached before. From Tiny Rogue’s loading screen through to the action itself, Ravenous Games’ latest feels like a product of this generation.

This works both for and against it. In one respect, Tiny Rogue takes the essence of a roguelike and boils it down into tiny nuggets of play perfectly moulded for mobile – something that likely wouldn’t have even been considered before smartphones and their associated app stores took charge. On the other hand, Tiny Rogue’s short and sharp randomly generated levels feel a bit like a kit game – a product of a do-it-yourself development pack that, with the addition of a decent artist, almost anyone could put together.

If that sounds harsh, then it’s probably worth mentioning that the game’s rather homebrew feel could well be what the people behind Tiny Rogue intended. It’s also an utterly unavoidable fact – this is a bitesize bit of rogueing that, however it was made, has one goal and one goal only: to give newcomers a taste of what a roguelike has to offer. In the case of Tiny Rogue, that’s death, and a lot of it. 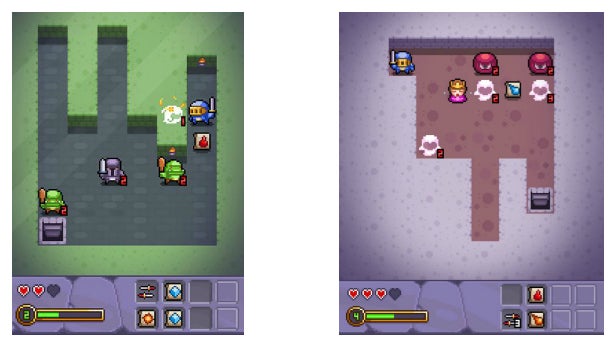 Controlling a little mini knight working his way through a series of small, 2D grid-based dungeons, Tiny Rogue uses a turn-based format, meaning every move you make is quickly countered by those out for your blood. When they’re in an adjoining square they’ll quickly take a pop at you, with two punches enough to bring your adventure to an end. All of the enemies on offer act in a slightly different way, too, with perhaps the most pesky on offer being a skeleton who bursts back into life just a couple of turns after you’ve floored him.

There are plenty of trinkets on offer, of course, to keep you going, such as power ups that restore your health, freeze all your rivals, fire arrows and a whole host of other goodies. Even with all these equipped, however, the big danger when playing any Tiny Rogue stage is that, with real estate severely limited, the chances of you trapping yourself in a corner with multiple enemies headed in your direction is especially high. This is Tiny Rogue’s signature – a roguelike where every element of play, from the size of the level you can explore to the enemies chasing you down, is deliberately kept limited so that the game is one that can be taken on in a spare five minutes. What’s more, it’s actually a fair bit of fun…at least at first. 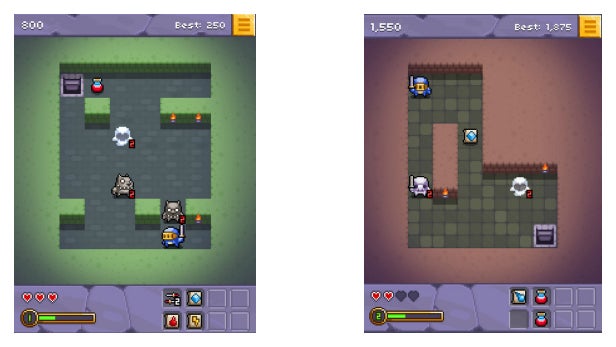 That’s because the whole thing feels a little disposable. By rolling things back so that Tiny Rogue has a pick up and play feel, it becomes just as tempting to put it back down again once you’ve got to grips with what it has to offer. With only your own high score to chase, there’s not all that much motivation to carry on playing, and as cute and cuddly as Tiny Rogue appears for those opening few minutes, it’s hard not to feel that more could have been done to put a bit more meat on the bone in order to keep players engaged.

Undoubtedly, scores of casual gamers find roguelikes incredibly intimidating and Tiny Rogue is a valiant attempt to bring more people into the fold. Likewise, there’s nothing wrong with keeping things simple in order to make the challenge more palatable, but if it’s to be a success, it has to follow that up with something that captivates those players so they don’t simply give up when they inevitably lose their way two or three times.

As it is, Tiny Rogue is an interesting, almost admirable attempt to take a genre with a loyal fanbase out to new pastures by keeping things simple, but by not building upon that foundation, the whole thing feels more than a little throwaway.

Verdict
Deliberately scaled back to keep things simple, Tiny Rogue is the perfect first port of call for anyone wanting to try out a roguelike who has been put off some of the more complex releases on the market, but a failure to offer a bit more meat later on ultimately makes this a forgettable experience.