The Tineco Pure One S12 is an impressive vacuum cleaner that ships with a tonne of accessories that make easy to clean practically any surface. Dual batteries are a useful way to extend runtime, while the iLoop system cleverly adjusts power on the fly. Dust pick-up is generally good, although we sometimes needed a few extra sweeps to pick up the dust when compared to the competition. Still, for the money, you're getting a lot of vacuum cleaner.

You’ve probably not heard of Tineco before, but the relatively new vacuum cleaner company is owned by Ecovacs, makers of some fine robot vacuum cleaners, including the Deebot Ozmo 930. For its first vacuum, the Tineco Pure One S12, the company has decided to go all-out. There are two versions, standard and Plus, which ship with different accessories but have the same main features including an AI system that adjusts the vacuum power automatically, dual batteries, a host of accessories, an LCD screen on the vacuum itself, and app control.

It’s mostly a successful vacuum, with some of the neatest controls that I’ve seen, and decent dust collection. A slightly cheaper feel than the rival Dyson V11 Absolute and a few issues with the AI system hold this vacuum back a little, but the Pure One S12 is still one of the smartest vacuums that I’ve tested.

Tineco Pure One S12 – What you need to know

The first thing that you notice when opening the box is just how many accessories you get. Aside from the main unit, you get an extension pole, a direct-drive multi-tasker power brush with LED lights, a mini motorised floor head, a crevice tool, soft brush, extendable crevice tool and a dusting brush. 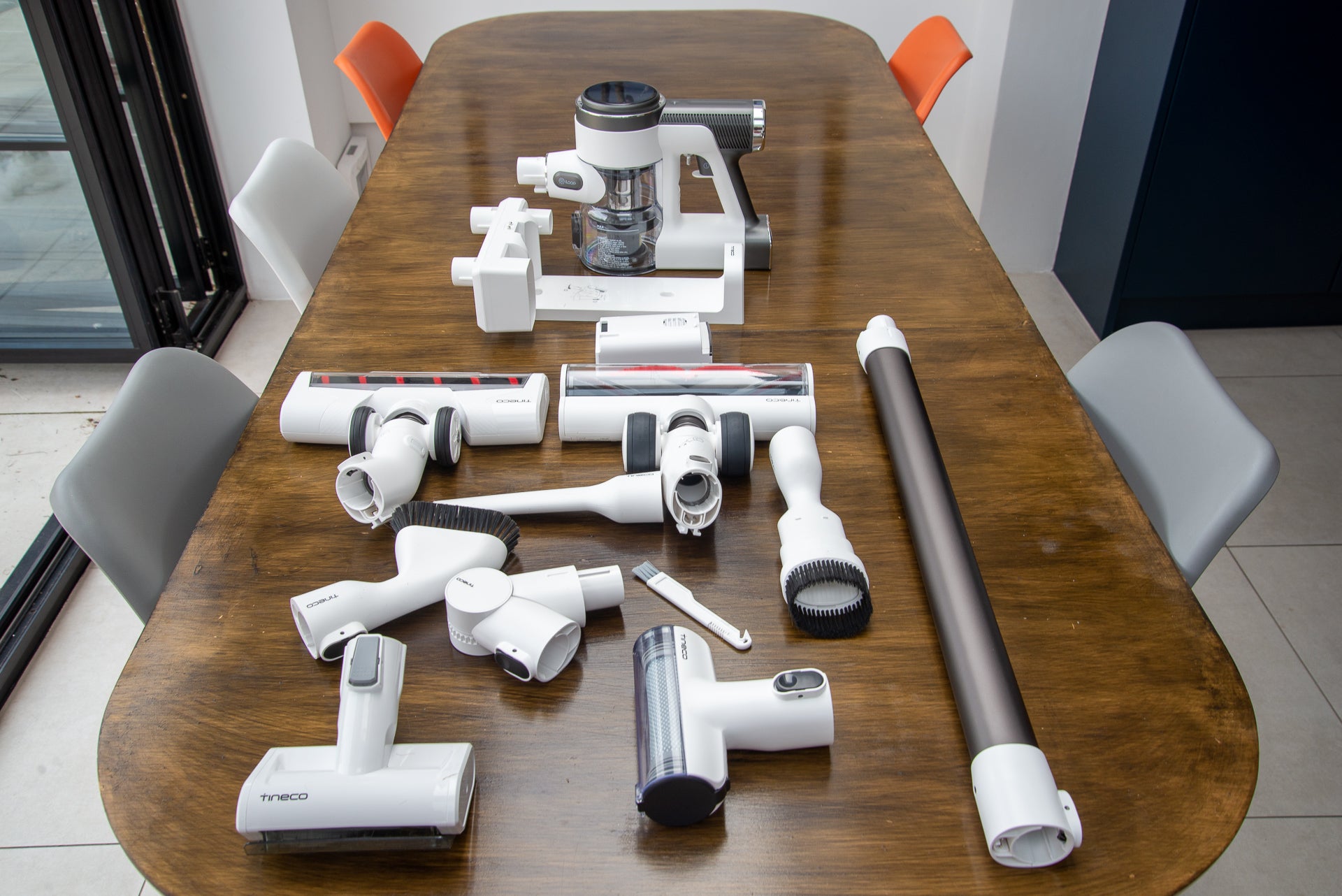 There are so many accessories

If you go for the more expensive Plus model, you also get a motorised hard floor roller, an angled attachment that makes reaching the tops of cupboards and wardrobes easier, and a flexible extension hose. I’m not convinced that these options are worth the extra outlay. 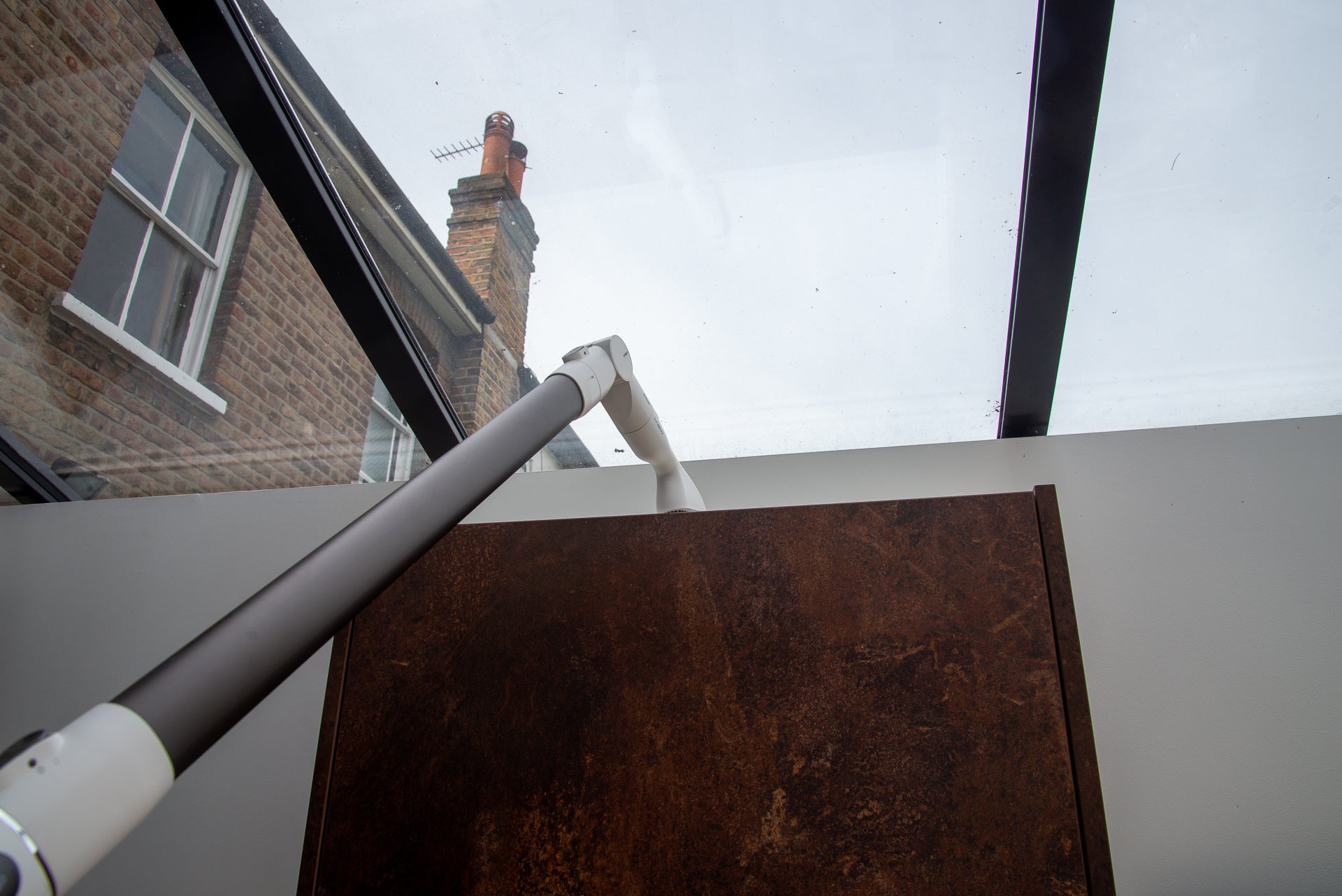 With the Plus model, you get an angle tool that helps you clean the top of cupboards

The combination of tools, even with the standard Pure One S12, is powerful and means that you can clean pretty much anywhere that you want. With the long pole and crevice nozzle it’s easy to clean up high to clear out cobwebs and the like. 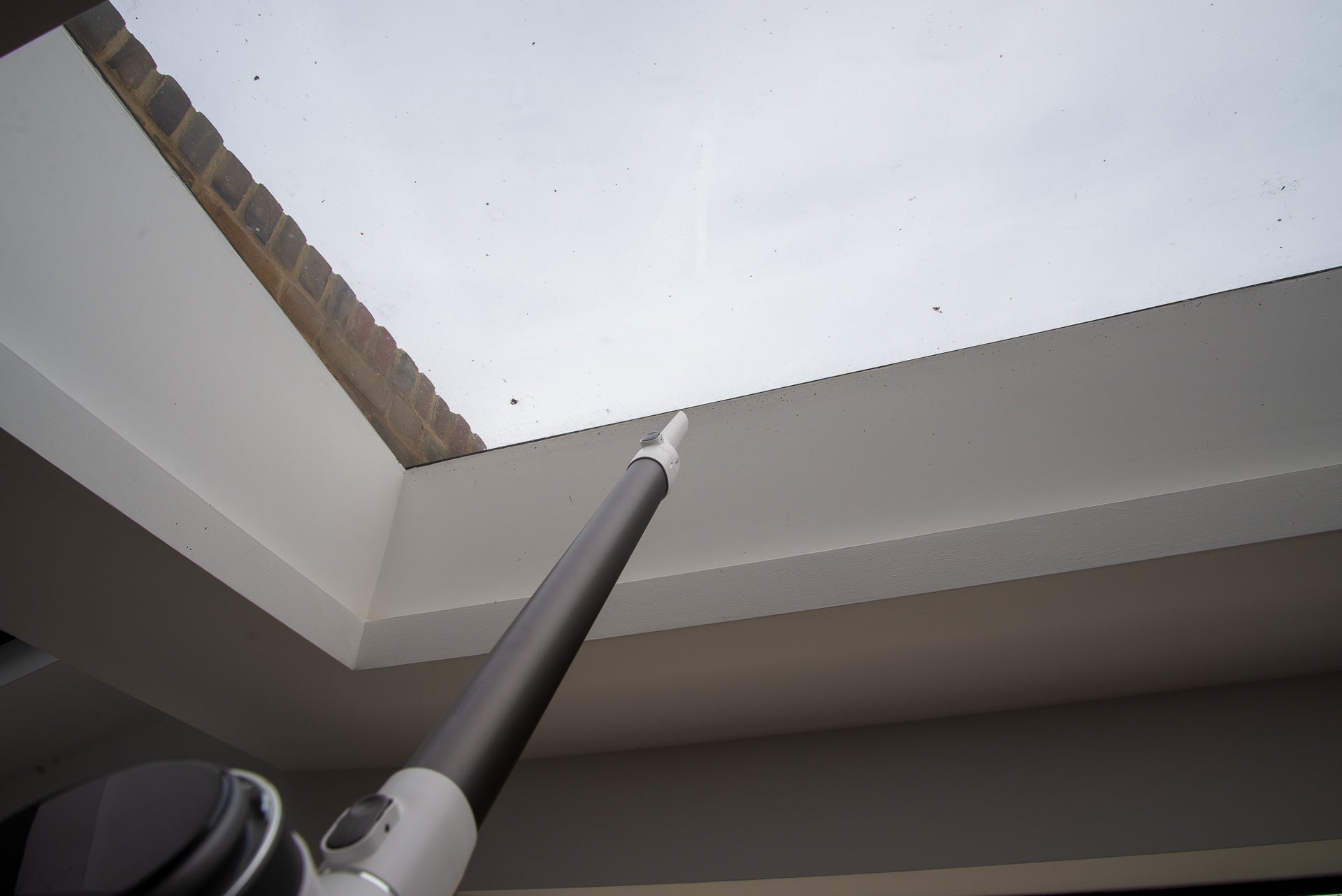 You can easily clean up high with this vacuum

On the floor, the motorised brush is manoeuvrable and it’s easy to get around furniture legs. This is partly down to the angle-joint on the brush head, but the wheels on the back help. 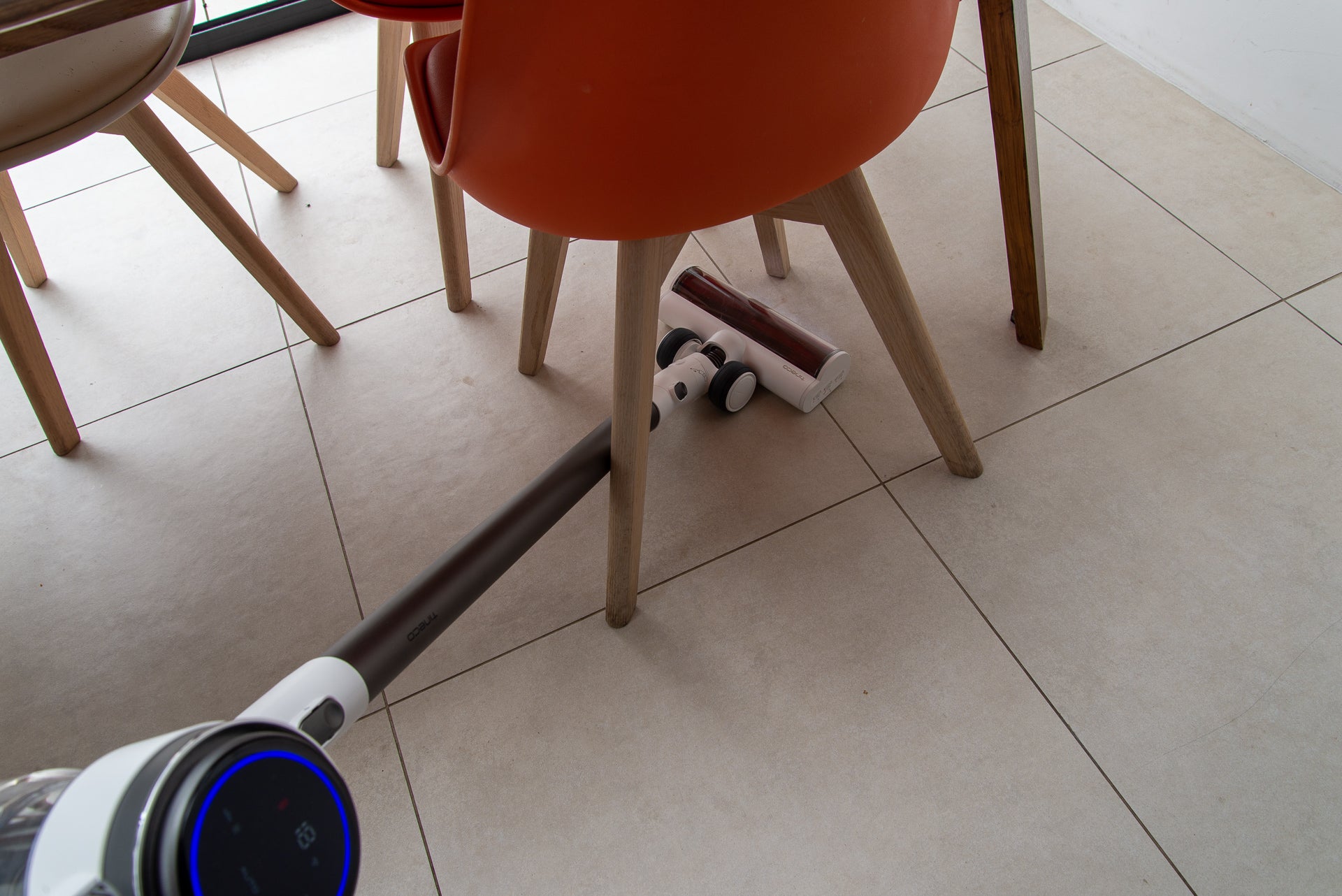 The only real issue that the system gives you is one of storage, as there are a lot of extras to keep. Tineco provides a wall-mountable charging dock, which can house the vacuum cleaner with its extension pole and a floor head attached, plus three of the smaller accessories. That still leaves a lot of other add-ons to put somewhere. 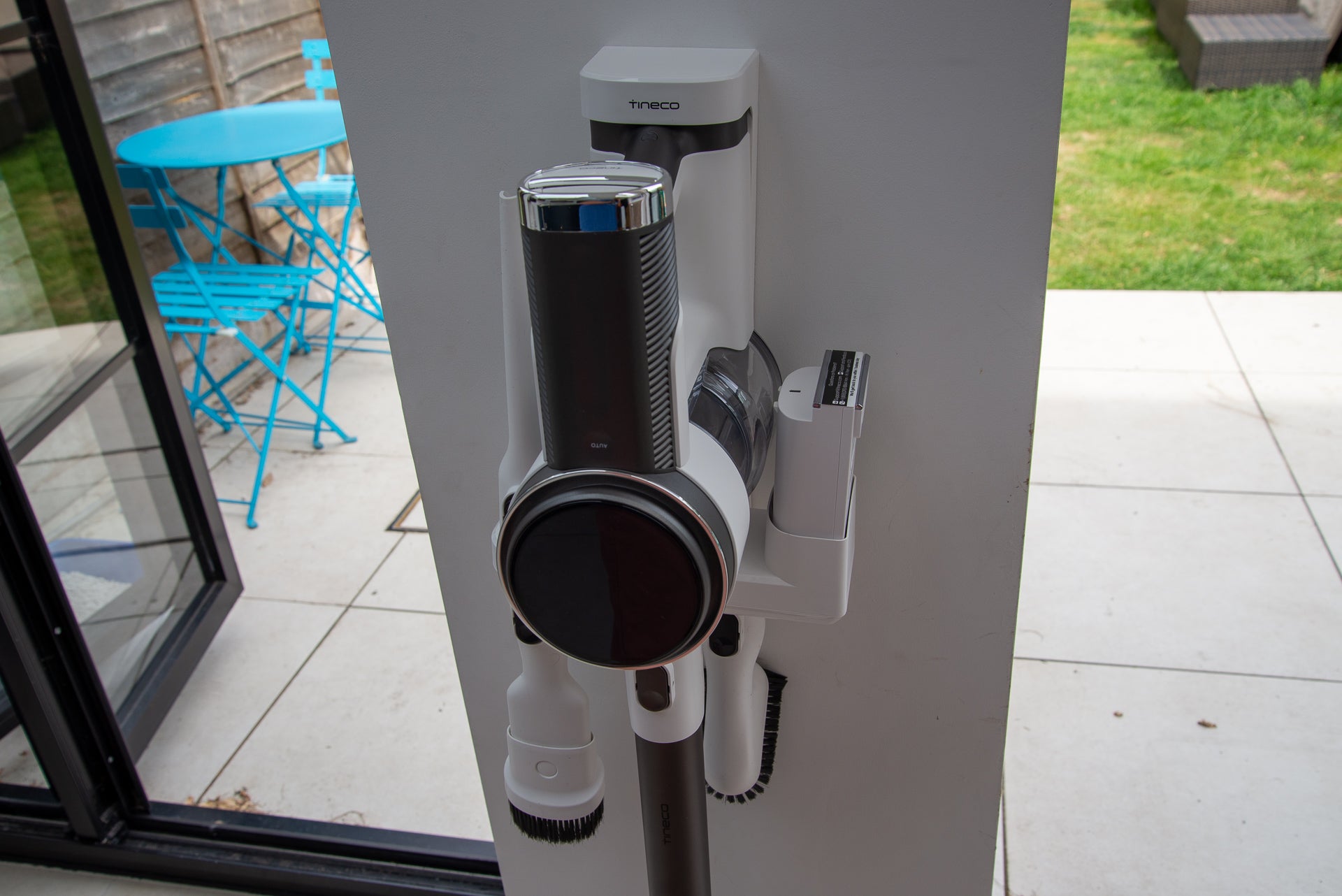 The charging dock has quite a bit of storage space, but you still need more

Outside of the standard cleaning accessories, Tineco provides a couple of useful extras. First, there’s the pre-filter cleaning tool, which clips into what looks like another floor head. This attaches to the vacuum cleaner, so you can just vacuum it clean. Of course, you need a pre-filter in place to use the vacuum, so you get a spare one of these in the box. Tineco recommends cleaning the filter after each use. There’s also a HEPA filter at the back, which can be cleaned under a running tap. 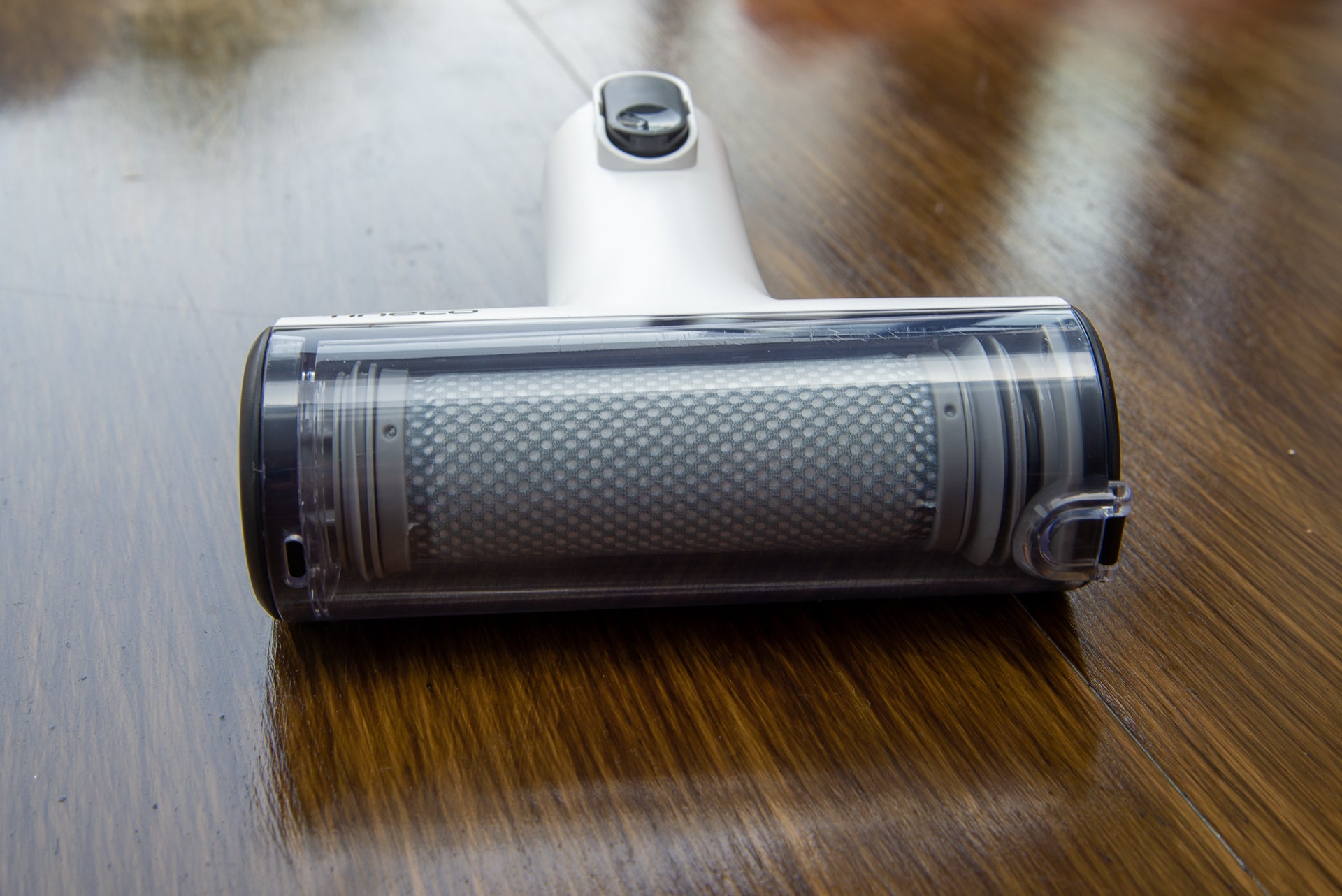 The pre-filter cleaning tool is a really neat idea

There’s also a spare battery in the box, which plugs into the wall-mount charger, so you can keep your spare topped up while you’re vacuuming and swap out when you run out of power. Finally, there’s a detangling brush for fishing out blockages and cutting away hair wrapped around any of the floor brushes.

The Tineco Pure One S12 has excellent controls and its LCD screen is useful, but the app feels a bit niche

While Dyson packed in a small LCD screen at the rear of the V11, the Tineco Pure One S12 goes one step further with a large circular display that dominates the top. When the vacuum cleaner is turned on, the screen shows the battery life in percent (unfortunately, not in remaining minutes as the Dyson V11 does), and can highlight if there’s a blockage. There’s also a ring that runs around the outside: it’s red while the vacuum is sucking up dirt, turning blue as your house gets cleaner. 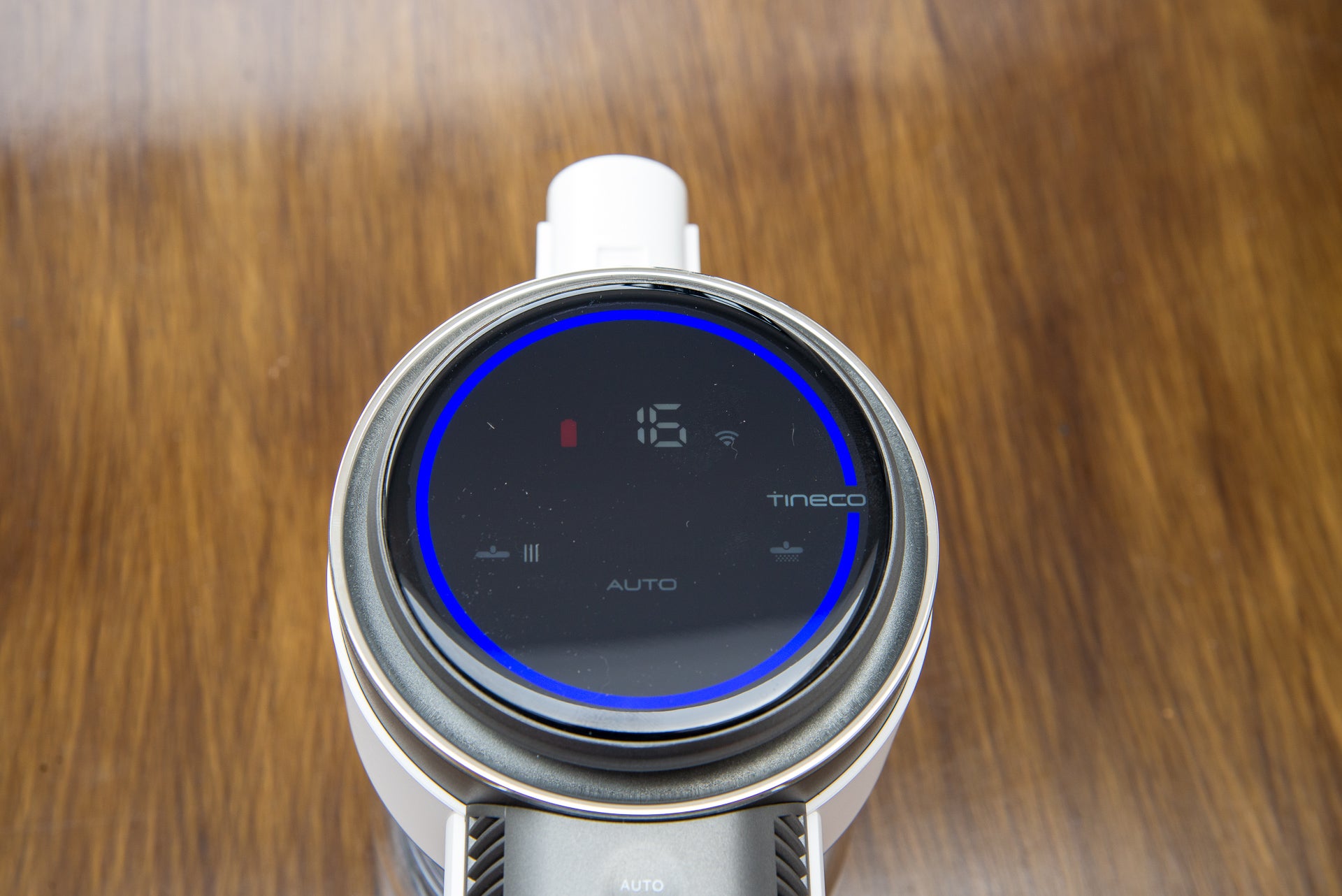 You can also see the current power setting on the screen, with the controls on the handle letting you adjust this. The auto button lets you turn on the vacuum’s iLoop AI system, which adjusts power based on the amount of dust it detects. If you want to ramp the power up or down manually, you just use the slider on the vacuum cleaner’s handle. These controls are intuitive, making the cleaner simple to use. It’s a quiet vacuum, too, going between 65.3dB on minimum power to 71.9dB on maximum. 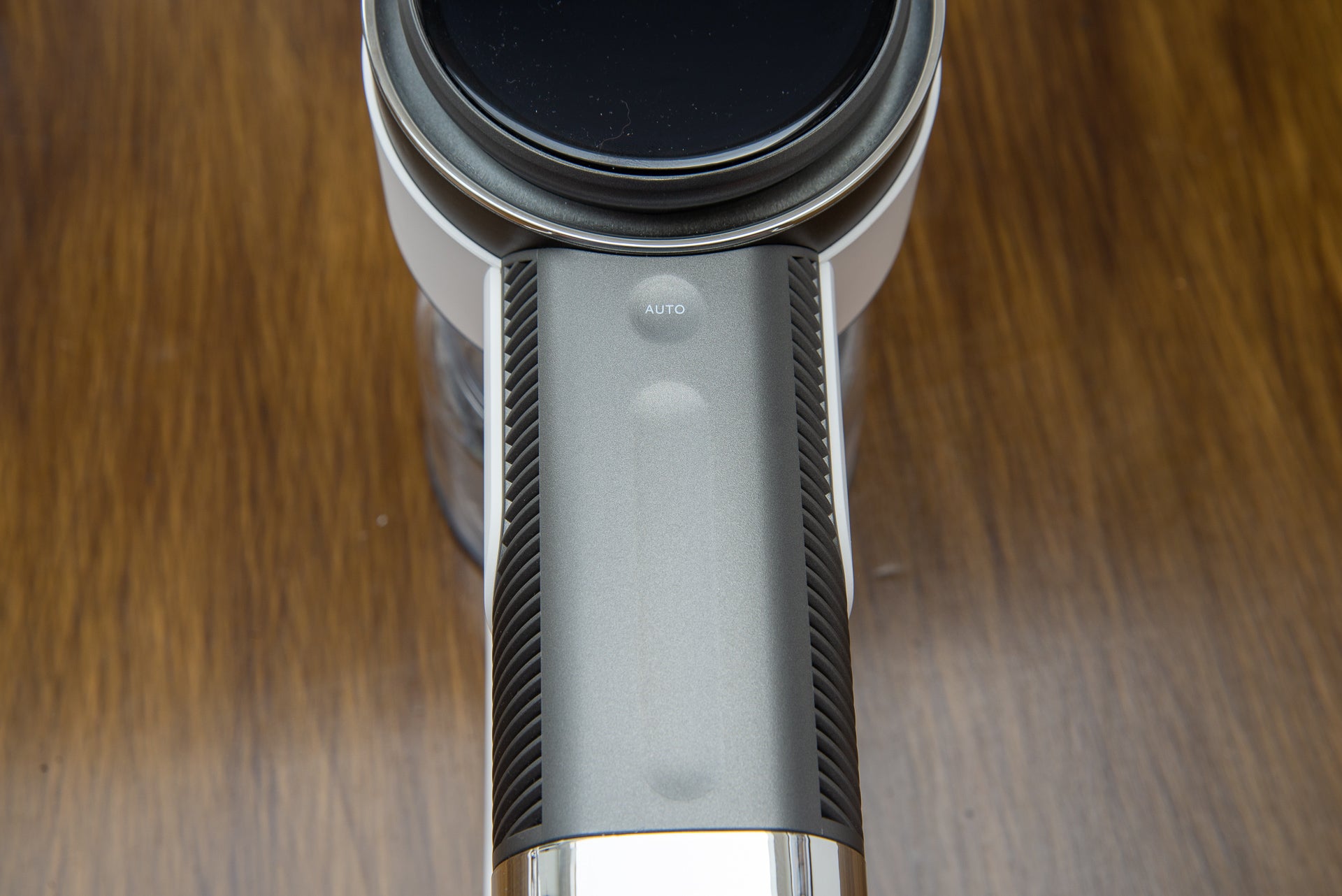 The slider power control is really easy to use

As with most cordless vacuum cleaners, the Tineco Pure One S12 has a trigger switch, with the vacuum in operation only while the trigger is pressed. However, there’s also a switch that locks the power on, which is handy for cleaning larger areas, or for people that don’t have much dexterity in their hands. 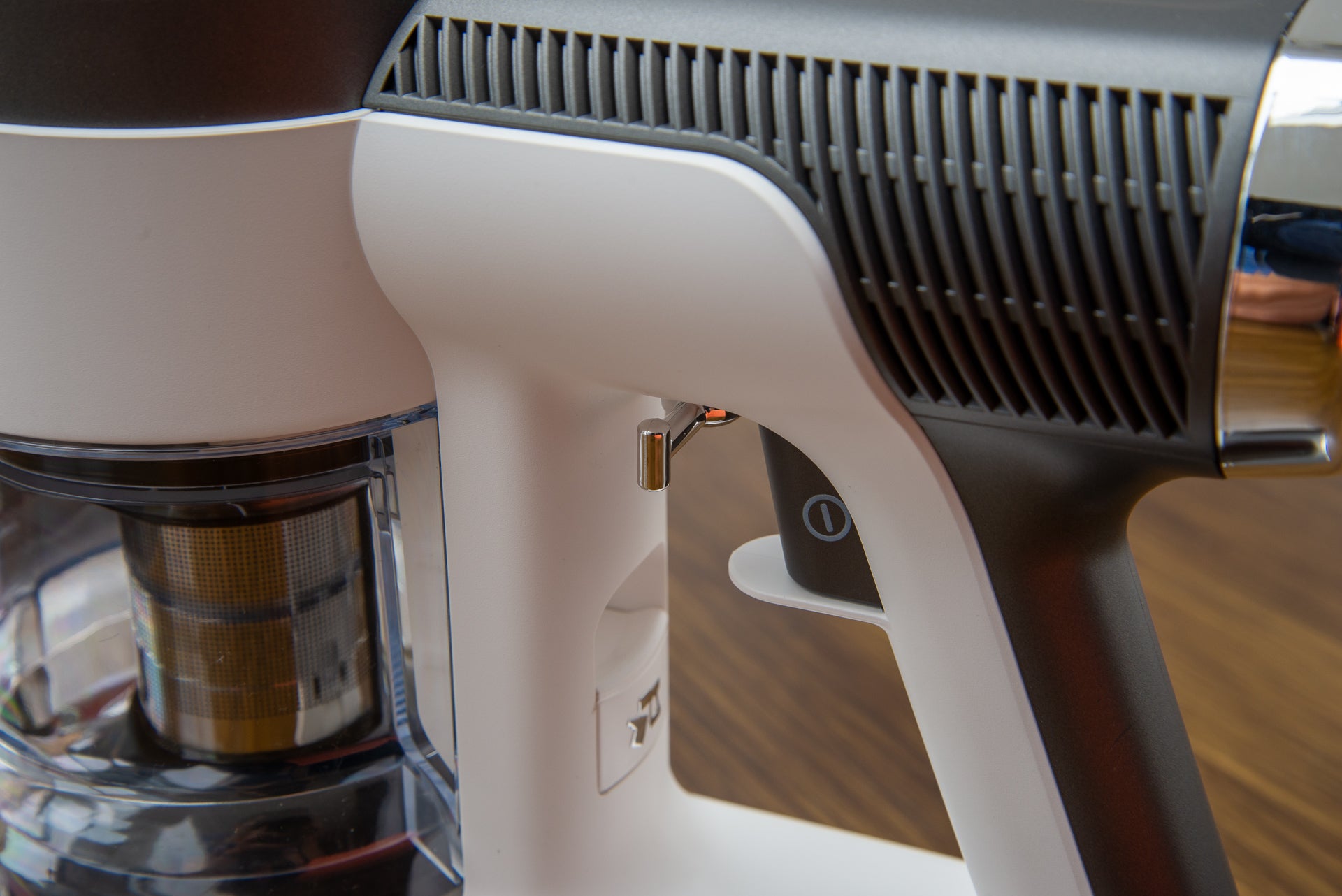 As well as a trigger, the vacuum can be switched on permanently

As well as controlling the vacuum directly, there’s an app that you can connect your vacuum cleaner, too. You can see the current charge status and you can adjust the vacuum cleaner’s power, too, although this is far harder than using the onboard controls.

More usefully, you can see the filter life listed as a percentage, so you know when it’s time to swap and clean the pre-filter. And, if there’s a blockage, the app can tell you – and show you – how to fix it. You can also see the cleaning performance, although the figures don’t mean that much, showing measurements like 83 dust/1 min.

As neat as it is to have a connected vacuum cleaner, the truth is that once I’d looked at the app once, I never felt the need to get it out again. The app sounds cool but I didn’t use it often

Shipping with two 2500mAh batteries, the Tineco Pure One S12 has enough power to clean large houses. The exact battery life is hard to define, particularly in automatic mode, as the vacuum will increase and decrease power as required. In auto mode, what I can say is that battery life is pushed as far as it can be based on the cleaning required. 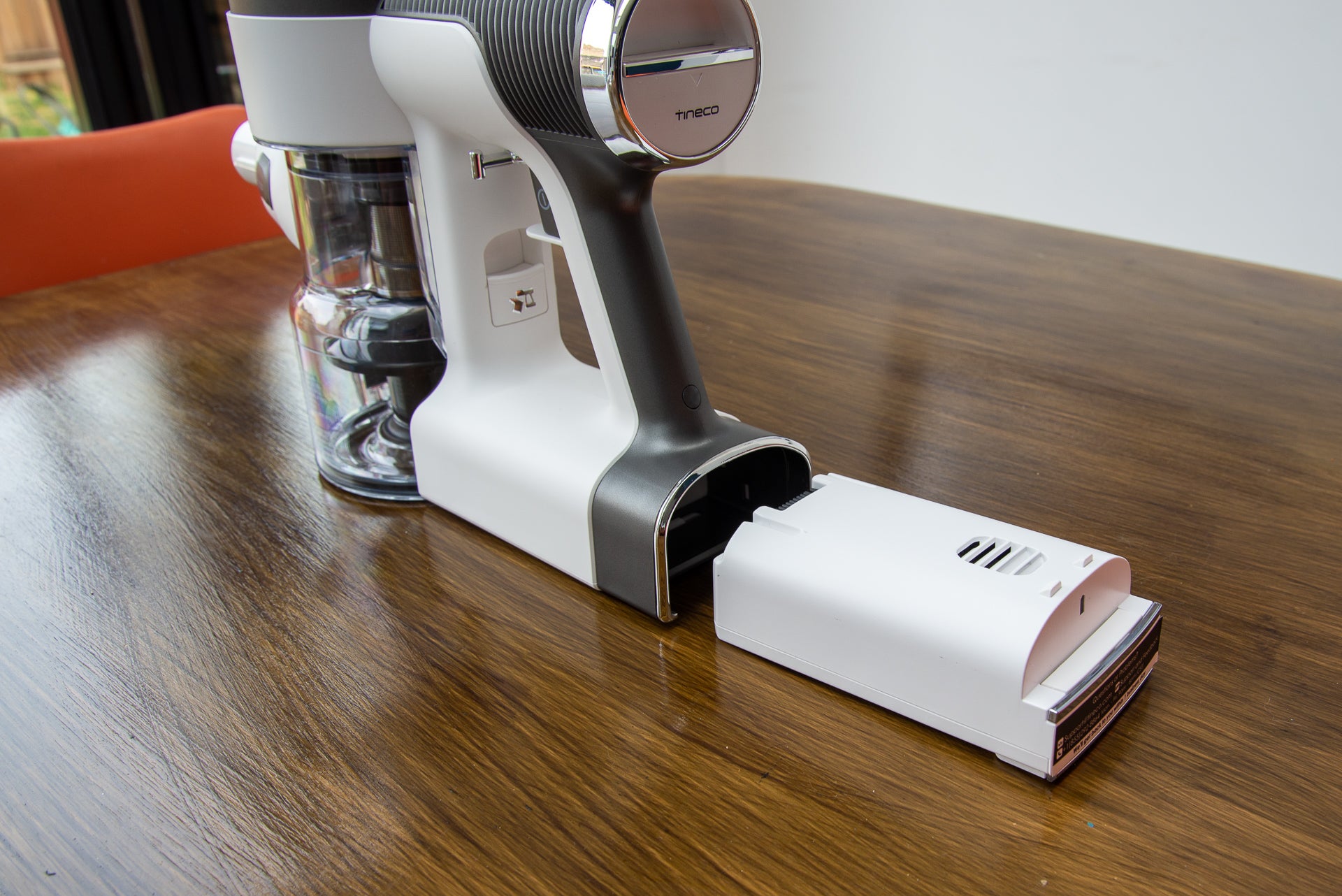 Replaceable batteries helps extend the runtime of the vacuum

From the specs, each battery can last for 50 minutes when running on low power, for a total of 100 minutes, which is pretty epic. On maximum power, you get 10½ minutes per battery, or 21 minutes from the two. Expect to get somewhere in the middle. Remember, this battery life is actual run time (or trigger time, as it’s often known), and a lot of time spent vacuuming is moving furniture and walking around. As such, the Tineco Pure One S12 should be able to cope with large houses with the two batteries.

Batteries take three to four hours to charge from flat, so you’ll need a break to allow both to recharge before you can go back to cleaning.

Core to the Tineco Pure One S12 is the iLoop system, which monitors for dust as small as 15 microns in size, and adjust power on the fly. As you vacuum in auto mode, you can see the power level shoot up and down, which is quite neat. And, unlike the Dyson V11 Absolute, which can only adjust power when using the motorised floor head, Tineco’s system works with all of the attachments.

For the most part it does a good job, although with our rice-on-a-hard-floor test, the vacuum cleaner left behind some bits of rice when using the Plus model’s soft floor brush, and I had to up the power to suck up everything. On carpet, the cleaner did a good job of sucking up dirt, although it couldn’t quite get into the edges as well as the rival Dyson V11. 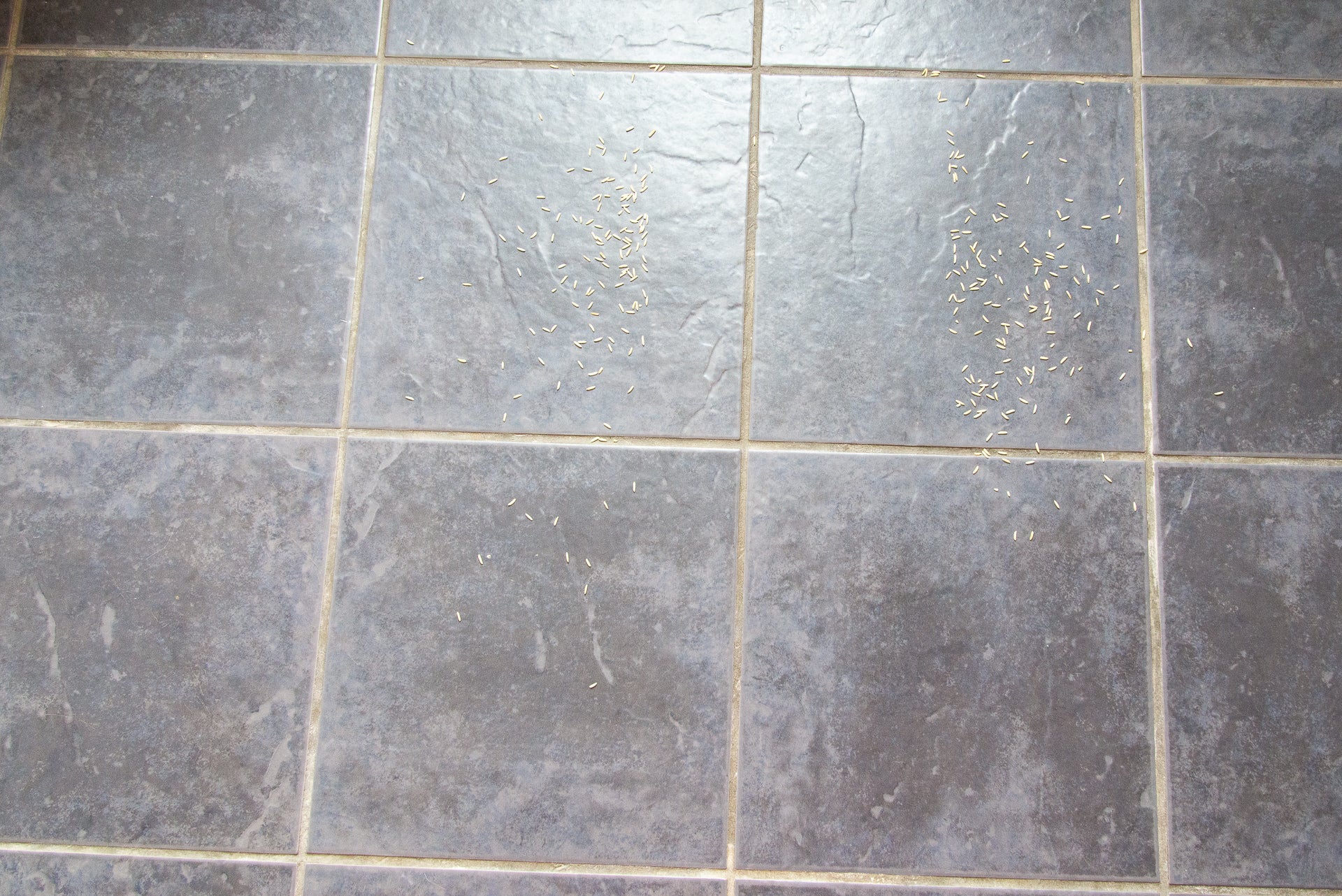 After a single sweep, there were still some grains of rice left

Where the auto mode isn’t so good is with dealing with things like spider webs. As you lift the cleaner up, the AI system goes to low power as it detects little dirt, and doesn’t give enough power to suck up a spider’s web. However, the simple controls meant that I could dial up the power when needed, switching back to auto mode afterwards.

Once the 0.6-litre bin is full, which will be more regularly than on with the Dyson V11’s 0.9-litre bin, you can empty it by pressing the button underneath to open the flap. For ease, the entire bin can be removed, but even so, I had to shake it hard to empty it and ended up with a bit of dust on the floor.

Should I buy the Tineco Pure One S12?

Given that this is the first vacuum cleaner that I’ve seen from Tineco, the results are impressive. The sheer number of accessories has to be applauded, making the Pure One S12 a powerful cleaner for all jobs. Then there’s the thoughtfullness of its design: the controls are easy to use, the iLoop system adjusts power on the fly, and there are two batteries for extended run time. The app is neat when you first use it, although it serves little purpose for day-to-day use.

Cleaning performance is generally very good, although the iLoop system doesn’t always get things right and we had to spend a bit of time picking up all of the rice that we had spilt for our hard floor test. Edge performance also isn’t as good as on the Dyson V11, forcing us to use a crevice tool to pick up the remnants of our flour spill.

Overall, the Dyson V11 Absolute remains the king of cordless vacuum cleaners, with the power to tackle most jobs in a single swipe, while the Tineco Pure One S12 often takes a bit longer to get there. That said, the Pure One S12 is cheaper than its rival, which is all the more impressive considering what you get in the box. Given the cleaning performance (see the next page for more), I’d go for the cheaper standard model, as the Plus model’s soft floor brush didn’t make a noticeable difference.