Every year the ludicrous pre-Christmas rush leaves the average game reviewer with a pile of games they want to play but simply don’t have the time to even get a look at. This year was especially bad: when week after week brings us games like Assassin’s Creed, The Orange Box or Crysis, who has time to look at a BlackSite or a TimeShift? It’s only now, as things get quiet in the period between Christmas and New Year, that we get a chance to take stock, look through those piles, and see if there’s something good we might have missed. As someone with a soft spot for the underdog, it’s one of my treats of the holiday season. 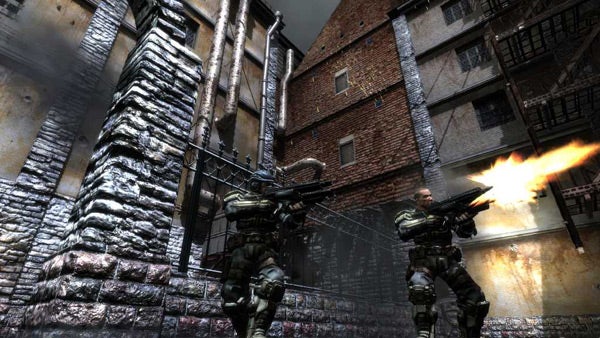 Of course, TimeShift hardly made it easier for itself. Saber’s game was originally set for a 2005 Xbox release. Then its original publisher, Atari, moved production to the Xbox 360 before deciding to drop the game into development hell. Along came Vivendi Universal and offered Saber the chance to take a little more time and turn a failing project into a great one. Unfortunately, one huge change of technology, setting and visual direction later, the game ended up appearing in November; just around the time The Orange Box, Call of Duty 4 and Crysis hit the streets. Ironically for a game where the control of time is a central theme, TimeShift’s timing could not have been worse. 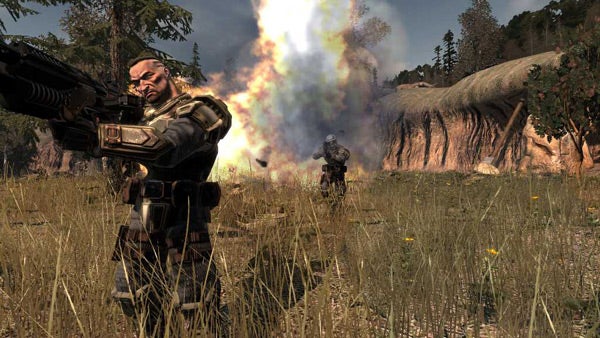 Worse still, because a game that would have already felt derivative of other FPS games now seems even less original. Its use of a slow-motion control would always have reminded you of F.E.A.R., and certain elements – the dystopian futuristic setting, sinister government troops, poorly armed resistance and officious civil announcements – practically beg for comparisons with Half-Life 2. In fact, if TimeShift had needed a subtitle, ‘F.E.A.R. and loathing in City 17′ would have done the job. However, its biggest new idea – its time-controlling Beta Suit – now feels ripped from the Nanosuit in Crysis, while other parts of the game feel close to Halo 3. As a result, TimeShift could easily be condemned as a B-movie version of other, better games.


But then maybe that’s not such a bad thing. There’s always something entertaining about a really good B-movie, and Crysis is actually a thoroughly enjoyable B-game. 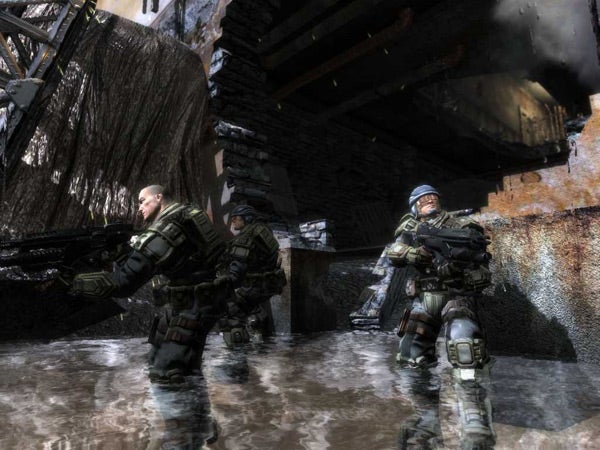 It helps that, technically-speaking, it’s not anywhere near as dated as you might expect. Saber’s engine doesn’t look at all old hat in the age of Gears of War, Halo 3 and Call of Duty 4 – which is good as they’re the games that it most frequently brings to mind. When it’s good, the game’s ravaged urban scenery, rich detail, strong dynamic lighting and excellent water and weather effects remind you of Epic’s work in Gears. Period details in some inside spaces bring to mind Bioshock, while a mid-game section in some lovely snowy alpine scenery wouldn’t have embarrassed Bungie’s latest blockbuster.


When it’s bad – when it’s just dishing out another boxy, featureless industrial interior – it merely looks like the more generic sections of F.E.A.R. or Half-Life 2. The character models look a bit like someone has tried to splice F.E.A.R’s high-tech armour with Gears of War’s steroid-popping freaks, but as you can now imagine you’re popping bullets into Marcus, Dom and mates, that isn’t as bad as it might sound.

The world feels solid too. Many walls, barricades and objects can be splintered by heavy firepower, and the ragdoll body dynamics are very convincing. Use your suit’s slow-motion facility, fire a grenade at the nearest group of bull-necked Combine wannabes, and the effects are pretty spectacular, helped by some very nice blur and distortion effects to show that the flow of time is being disrupted. In short, TimeShift might not be as gobsmacking as Crysis or as gorgeous as Call of Duty 4, but it certainly doesn’t look and feel like their poor country cousin. 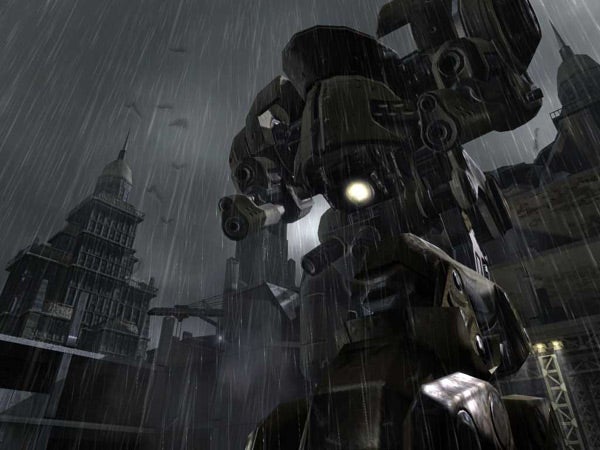 The question is, does it play like one? Well, the plot definitely has that ‘straight to video’ feel. As far as I can work out from the (I think deliberately) confusing intro movie and the snippets of text jammed in while the game loads levels, you’re a scientist working on a revolutionary time-control suit at a top-secret military research facility. Another Scientist, Dr Krone, steals the Alpha prototype model and uses it to travel through time and become an evil dictator in an alternative, totalitarian future Earth. Only by rescuing the damaged Beta version of the suit can you jump to his alternative timeline, aid the ‘Occupant’ resistance, unravel Krone’s evil work and set the world to rights.


To do so, the suit gives you several abilities. First, it acts a bit like armour and tracks your physical condition, repairing damage when you take a breather much like Halo’s shield or Call of Duty 4’s health recharge feature. More significantly, it allows you to control the flow of time. Press and hold the left bumper (in the Xbox 360 version) and you can choose to pause time for a few seconds, slow it down, or even reverse it. Tap the bumper, and the suit’s in-built AI chooses an appropriate power for you. This means you can do some pretty cool things. Obviously the old F.E.A.R. blast several baddies in slow-mo then watch them collapse as time speeds up again routine is a no-brainer, but you can also grab weapons, evade heavily armoured robotic sentries and solve your share of simple puzzles. 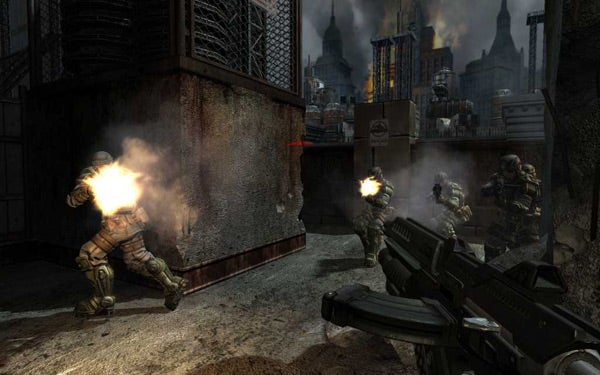 And making use of these abilities is vital because the combat – at least on anything beyond Casual level – packs a punch. TimeShift goes big on high-powered weaponry and puts it in the hands of large numbers of enemy troops fully capable of using them. As you’re often surrounded and outnumbered, and there’s no Gears of War-style cover system, making careful use of the slow-motion and pause facilities is the only way to tip the balance in your favour.


I couldn’t say that the AI is up there with F.E.A.R. or S.T.A.L.K.E.R., but your foes show some signs of group intelligence, and it’s hard to win a firefight against them fair and square. As a result, much like F.E.A.R, the action develops its own rhythm. You make contact with the enemy, hunker around a corner, engage your powers, then deal as much damage as humanly possible before the guage runs out, before scrambling for a safe spot in which you can recuperate and recharge. There’s a whole lot of tension, then a very satisfying, bloodthirsty release. 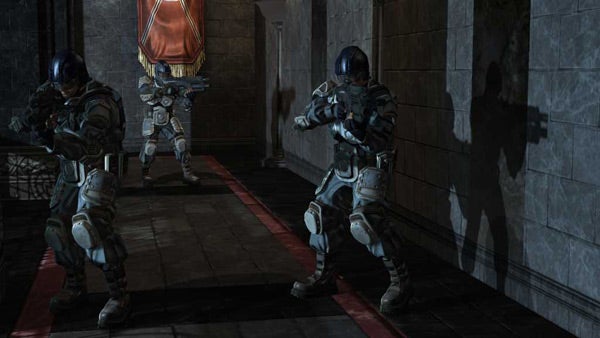 That said, it’s hard to avoid the thought that much of the suit’s potential has been squandered. Watching a crowd of enemies blasted back in slow-mo never gets old; nor does reversing time when a grenade comes flying towards you. However, anyone expecting puzzles in the order of Prince of Persia: Sands of Time is going to go away disappointed. It’s all along the lines of pausing time to escape the falling lift or cross the collapsing bridge, and points at which you can reverse time are blatantly controlled and obviously signposted. There’s none of the experimentation or flexibility you get in a Crysis or Bioshock, and the fact that the suit suggests which power to use means you can click the left bumper and switch off 90 per cent of your brain entirely.

What’s more, the game is hugely linear, to the extent that it makes Call of Duty 4 feel like S.T.A.L.K.E.R. There’s obviously a narrative hidden away somewhere, but the pieces all feel dislocated from each other, and while you go from level to level following a list of constantly updated objectives, it’s hard to work out where you’re going, what you’re doing and why. Without the atmosphere of a Bioshock or Half-Life 2, all TimeShift can rely on is its action. 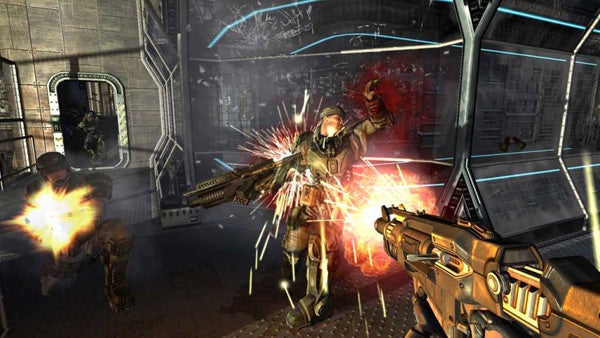 Yet despite this, it’s an oddly gripping game. It helps that the pacing is excellent, with most of the levels having a nice ebb and flow of gunplay. The challenge level at medium difficulty is just about right, checkpoints are sensitively placed and you can also save when and where you like. There are a couple of useless on-rails shooting sections, but the game makes up for these with a nice stretch of racing through the mountains on a quad-bike. And the enemies, the settings and the weaponry get more interesting and more varied as time goes on – and we all know bigger, better games where that’s not true. TimeShift isn’t a very clever shooter, but as dumb shooters go it’s meaty and solidly constructed.


And, as long as you like dumb shooters, that’s probably what you should take away from this. In many respects, TimeShift is the FPS equivalent of the sort of low-budget action movie that used to star Jean-Claude Van Damme but now stars Jason Statham. You wouldn’t buy it at full price over Call of Duty 4 or The Orange Box any more than you would choose to see Crank over The Bourne Ultimatum at the cinema, but if you saw it sitting at a bargain price in the local video store, you wouldn’t be disappointed if you picked it up and took it home. 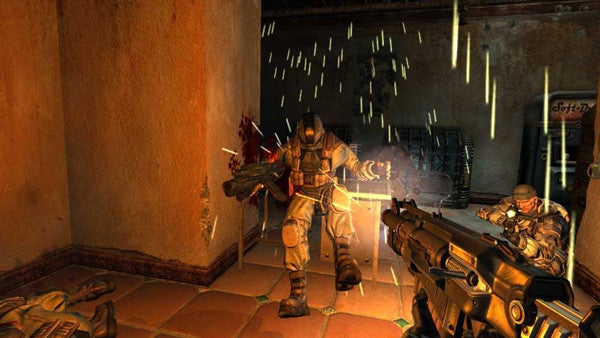 TimeShift isn’t the game it could have been – but given its troubled history we can say that in both a bad way and a good way. It’s not worth more than a seven for all the reasons stated above, but there are times when I got carried away playing it that I would have sworn it played more like an eight. If you’ve already worked your way through TimeShift’s more accomplished peers, that’s something worth bearing in mind.


It’s unoriginal and does too little with its handful of good ideas to reach anyone’s idea of excellence, but as a dumbed-down shooter TimeShift is actually an awful lot of fun. Buy it at a bargain basement price, then enjoy.