Much time has passed since the lightgun game last enjoyed the spotlight. About a decade ago Sega’s Virtua Cop and House of the Dead titles and Namco’s Point Black and Time Crisis games were hugely popular in the arcades, not to mention the Saturn, PlayStation and Dreamcast consoles. However, as the next wave of systems arrived and the FPS became the dominant action genre, the simplistic, on-rails shooting of the lightgun favourite looked increasingly past its sell-by date. In a way, the Wii has changed all this, and games like Ghost Squad and Resident Evil: Umbrella Chronicles have given the lightgun game another chance. The question Time Crisis 4 poses is whether this renewed interest is limited to the Wii, or can Namco-Bandai revitalise the genre on PlayStation 3 as well? 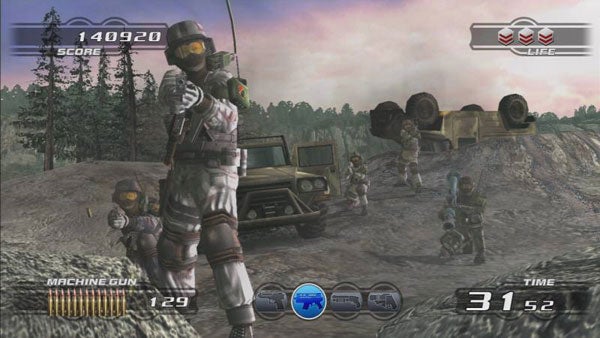 Of course, part of the genre’s problem has been technical. The G-Con technology behind Namco’s old-school console lightgun games was based on CRT displays, and the current console systems are designed to work with Plasma and LCD HD screens instead. To get around this, Namco-Bandai has designed a new G-Con 3 controller which works along similar principles to the pointer functionality in the Wii’s remote, with a sensor built into the gun that works with signals emitted by infrared modules mounted on the screen. Unfortunately, Namco’s implementation isn’t quite as brilliant as Nintendo’s. Instead of a sensor bar we have two separate emitters which dangle from weighted rubber straps attached to the top-left and top-right corners of your screen, connecting to the PS3 via USB. More shockingly, the G-Con 3 itself has a USB connection, which instantly makes it feel old-fashioned after more than a year of using the lovely wireless Wii remote. 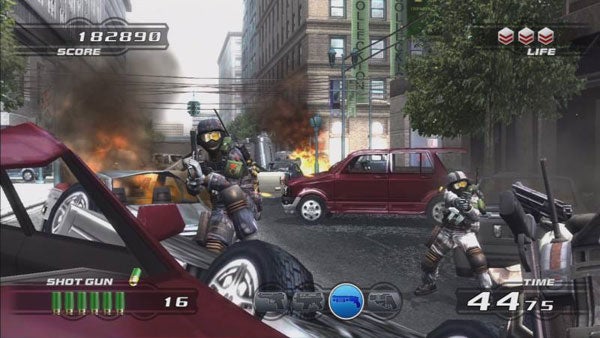 The real problem, however, is that this setup isn’t just messy, it’s also functionally flawed. The G-Con seems to need a minimum of about four feet between gun and emitters to operate effectively, and even once you take that into consideration, calibrating the system using the game’s five-point, four corners and a centre target routine can take several goes before you get a decent result. If you use a 32in or above screen when playing on your PS3 you’re fine, but if you tend to play games on a second set or PC monitor, then you might want to think twice before investing in Time Crisis 4. 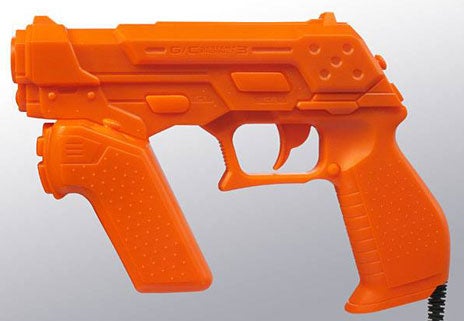 Once you’re up and running, the first thing that will hit you is the sheer complexity of the G-Con 3. Packing two analogue sticks, a trigger, two side buttons, two shoulder buttons and two buttons above the butt, it’s clearly not designed for the kind of simple point-and-shoot lightgun experience we all know and love. This turns out to be the case. Even in its Arcade mode, Time Crisis 4 seems obsessed with taking the genre somewhere new.

Of course, it’s not a total reinvention. Your movement and your point-of-view are as much on-rails as they ever were, and – as in previous Time Crisis titles – it’s all about aiming and firing while ducking in and out of cover using the action button. The game moves on from enemy wave to enemy wave and situation to situation, throwing various foes with various attacks at you, with a juicy boss battle at the end of each of the game’s three chapters. Along the way you can expect action in airport terminals, caves, forests and military bases plus a nice stretch firing from a helicopter at aircraft and armoured vehicles among the streets of San Francisco. Essentially we’re talking same old, same old, right? 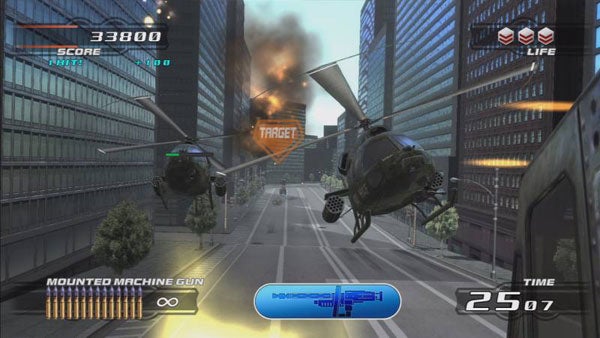 Wrong. For one thing, the game now allows you to select between different weapons, with certain weapons – say, the shotgun or the SMG – more effective against some enemies than others. For another, the game’s slightly hackneyed plot (rogue military forces messing with biological weapons) allows for plenty of action with a number of different creepy-crawly mutants, all of whom need treatment from a particular weapon if you want to get rid of them damage free. In fact, the game has some other new ideas. A stretch where you use a torch to light your target area in darkened caves is fun, as is the odd sniping sequence or a frantic escape where you tap one button to pull yourself out of a sand hole while blasting another bunch of GM bugs.


However, the game’s most interesting new mechanic is also its most flawed. In certain situations you’re thrown into a two or three screen battle, with different waves of attackers coming at you at different angles, while you switch between the different screens using a quick flick of the G-Con left or right. It’s a nice idea, but does it work? Not really. In my experience you spend a lot of time flapping with the G-Con as you desperately try to get it to switch your view, and not enough time shooting the bad guys before they get to you. 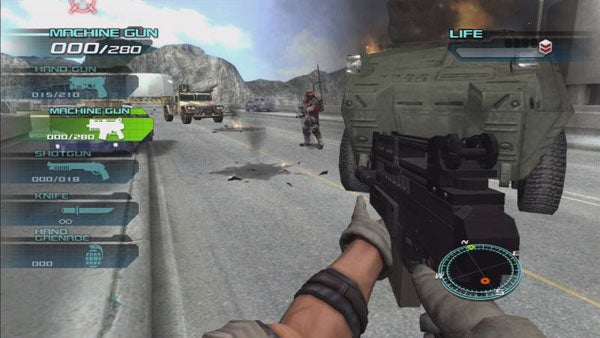 Now, the arcade mode is fun, but all these new twists don’t make it feel any more relevant or any less dated than, say, Ghost Squad. That’s not necessarily a criticism when the gameplay works, but there are plenty of occasions when the tweaks actively get in the way of the fun – particularly when you’ve already used all your shotgun or SMG ammo at a time when the game demands you use that weapon, or when you keep failing parts of a mission because you can’t get the screen-switching move down pat. What’s less forgivable is that the game looks so dated. Remember how, in the early days of the Xbox 360, a lot of games looked like PS2 games with a few HD textures added and an HDR lighting engine layered on top? Well, Time Crisis 4 is a return to those good times. It all looks very crisp. You could even say that the clean, old-school look suits the style of the game. But in an age where gritty detail and lavish surface effects are taken for granted, Time Crisis 4 doesn’t really make the most of the PS3 hardware.

If this shortcoming is obvious enough in Arcade mode, it’s painfully so in the new Complete mode. Here Namco-Bandai surrounds the sharp shooting sequences you’ll already have seen in Arcade mode with a selection of additional chapters that turn Time Crisis 4 into a lightgun/FPS hybrid. Suddenly, those two analogue sticks in the G-Con come into play, one handling your viewpoint, the other handling movement, while the rest of the buttons deal with weapon selection, ducking, jumping and reloading. Meanwhile, you’re aiming and shooting at the bad guys just as you would in a regular Time Crisis game. 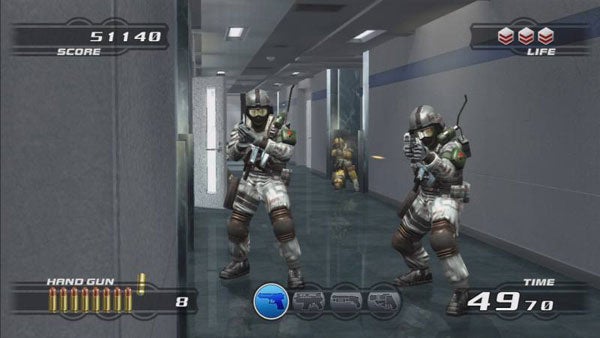 It’s an interesting idea, but not particularly successful. For a start, using two sticks plus aiming and shooting at the same time gives you a lot to get used to – if you can pat your head and rub your stomach at the same time you’re laughing, but if not it will take you a while to settle in. What’s more, this isn’t a great FPS by any means. The level design is dull, the visuals are even less enthralling than they were in the single player game, the checkpoints are poorly spaced and the find-key-to-open-door objectives are the kind of thing most real FPS games dispensed with years ago. Basically, the FPS sections are a chore to get through, and their only saving grace is that they’re relatively easy. If only the same could be said about the chunks taken from the regular Arcade mode. While the Complete mode cuts these down into smaller sections, you’re effectively being asked to tackle each one without using a single continue. Unless you memorise each wave of enemies and learn to anticipate every attack, this is practically impossible.


To round out the package – or not – there are no online options – not even leaderboards. Even the addition of some simple, multiplayer-friendly bonus games can’t make up for that omission. Long-time fans of Time Crisis or Lightgun games may get enough out of Time Crisis 4 to make this pricey purchase worthwhile; the Arcade mode is reasonably challenging and there’s enough bang and blast action to just about pass muster. Everyone else, however, would do better saving their £60 for something with more long and short-term appeal. 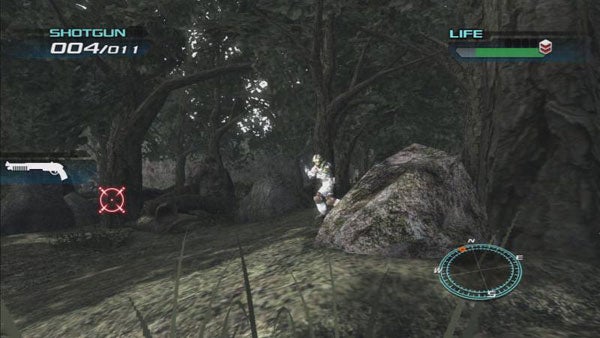 Much as I respect Namco-Bandai’s attempts to take this classic genre in a new direction, adding complexity doesn’t seem the best way to go, and the clutter-friendly, finicky approach taken by the G-Con 3 hardware only seems worse after the simple setup and easy play offered by similar games on Wii. If Namco-Bandai had wanted to integrate FPS and lightgun gameplay, it would have done better to look at the excellent example offered by Metroid Prime: Corruption, and – for all its many faults – Ghost Squad is a more immediately entertaining game. Expensive, badly executed and anachronistic, Time Crisis 4 is only half as much fun as it could and should have been.


Spoilt by clumsy hardware, a ropey FPS mode and a range of poorly thought out innovations, this isn’t the grand return of the lightgun game we might have hoped for. One for hardcore gun-nuts only.