Golf. It’s a game for stuffy old men or a venerable, relaxing pastime – depending largely on whether you play it or not.

Tiger Woods PGA Tour 14 is the latest in a long, venerable series of golf games. But like golf itself, some may find it a bit dull as not all that much has changed since 2012’s edition.

A selling point of last year’s Tiger Woods PGA Tour 13 was that it tracked the progress of Woods’s life, letting you play episodes from his golfing past as challenges. This year’s game takes a step back.

Aside from a career mode that lets you play through real-life tournaments as a home-made pro golfer, there’s a challenge mode that looks back through the history of golf. 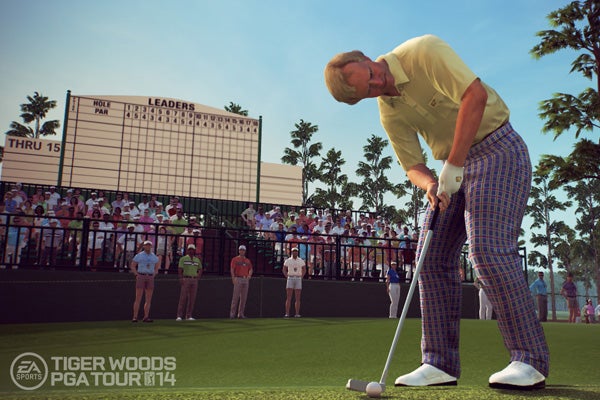 Starting in the mid 1800s and working up to the present day, Tiger Woods PGA Tour 2014 offers around 60 challenges. These encompass some of the most memorable moments from the careers of the world’s most famous golfers. And, naturally, that includes a handful of Tiger Woods scenarios. They might involve a few crucial shots, or nine full holes.

As a bit of cheesy visual garnish, the scenarios’ visuals are intended to evoke the era they occur in. So the first 1837 challenge is seen through a scratchy sepia filter, and the crowds that surround the holes in the 50s are dressed accordingly. Only roughly one challenge per decade is available from the start, with others unlocked by completing those already unlocked. It’s a lengthy road to walk down. 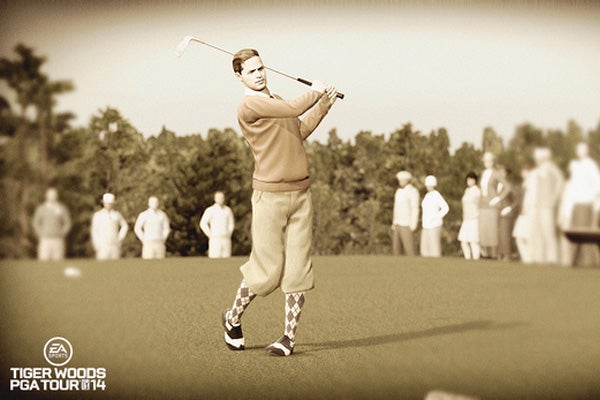 When shacked-up with the career mode, Tiger Woods PGA Tour 14 offers masses of content. As with so many EA Sports games, this is a title EA wants you to play until next year’s edition comes around.

Unlocks aren’t limited to courses, either. At the start of the game, your career golfers only have access to one set of clubs and one outfit. Others are unlocked as you play – and don’t expect to get your hands on the best gear within the first week. To unlock everything, you’ll need to put serious hours in to level up your career golfers.

In the career mode, your golfer earns experience points with every right move made. Birdies, shots that land on the fairway – any positive shot will be rewarded with a few points. A few hundred, then a few thousand, will earn you a level up. Get those thumbs prepped.

While some minor changes have been made to the game’s structure with the addition of Tiger Woods PGA Tour 14’s historic mode, the way you play the game is more-or-less unchanged.

All your swings are determined by a pull back and then forward on the left analogue stick, mimicking the back and forward stroke of the on-screen golfer. Although it’s disappointing to see so little progress since last year’s game, this is a system that works extremely well. 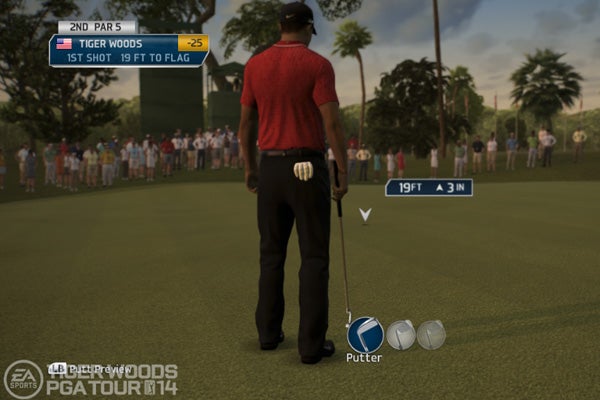 Rather than relying on QTE-style timed button presses, the left stick system is all about rhythm, and getting the muscle memory mojo that is – in a very small way – comparable to what real-life golfers need.

As with virtually any golf game, this mechanic is the final coda that follows picking where you want the ball to land, and having made any compensation for wind (and land contours when putting). And preceding these, you pick what sort of golfer you want to play as – perhaps the most important factor being whether you want to focus on power or accuracy.

Regardless of which character you pick, Tiger Woods PGA Tour 14 is a game that swings between deep satisfaction and controller-bashing frustration for all but those who have gained the muscle memory already mentioned to ace each and every swing. It doesn’t come all that quickly, especially when many shots stray from the “straight forward, straight back” swing.

Those with Kinect can also control their swing using the sensor, mimicking the moves of a real golfer.

There’s no altering the course of the ball mid-flight in Tiger Woods PGA Tour 14, as if your golfer was pumping away at some massive bellows from the green. This is a relatively realistic golf title. And, true to life, it can be punishingly unforgiving at times. It’s all too easy to muck up a lead in an 18-hole course with a poor performance on a single hole.

And much as it may have raised our blood pressure over the last week, it’s probably exactly how Tiger Woods PGA Tour 14 should be.

Although innovation is a wonderful thing, we found it easy to forgive Tiger Woods PGA Tour 14’s lack of change in the control dynamics department. The lack of significant graphical improvement is not, though. 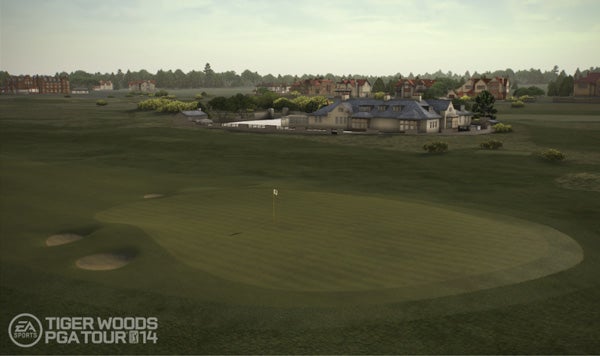 In part, the tired textures and mid-grade character models seen in the game highlight that- contrary to what some may see – console games are gagging for the next generation of hardware to arrive. Real creativity is needed to make Xbox 360 and PS3 games look good this year.

There’s no such thing here. Tiger Woods PGA Tour 14 offers a day and night cycle, touted as one of the game’s top features, but there’s little inspiration to the visuals and environmental dynamics here.

When you’re not peering into a sunset on a cliff-bound course that looks out onto the sea, this is a drab-looking game. And it features plenty of flat, green holes. There are twenty Championship courses in the game in total.

The Country Clubs of Tiger Woods PGA Tour 13 return in this “2014” edition, upping the number of online members per club from 25 to 100 and enriching them with chat and spectator modes. Their primary function is to let you play against real players, rather than AI ones, of course.

Tiger Woods PGA Tour is a more-of-the-same effort from EA Sports that keeps the great swing mechanics of its predecessor and adds an interesting historical challenge mode. If you tried last year’s version and didn’t get on with it, this year’s version won’t suddenly pull you in. And its graphical engine is starting to look seriously tired at points. However, at its heart is a rock-solid, rewarding golf game that will keep you busy for weeks, if not months.