With PGA Tour 09 the Tiger Woods series has hit its fourth iteration on the current generation of consoles, and you can feel that EA is really struggling for those big new features that can justify this year’s upgrade. Performance coach? Club tuner? Simultaneous online play? As we’ll see, these aren’t exactly poor inclusions, but are they really the kind of killer features that make you think “Blimey, I’ve got to get me some of that!” Probably not. What should is that, through a wide range of tweaks and a slight shift of focus, EA has finally made Tiger Woods the current generation golf game that it should have been two or three years ago. I know “It’s just better, trust us” or “We’ve erased the mistakes we made last time around” don’t make for such appealing back-of-the-box blurb, but this really is the major selling point. 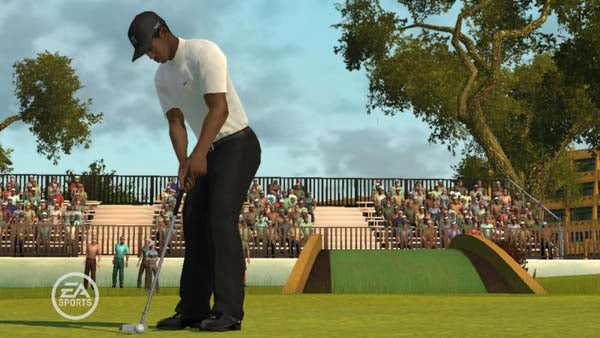 You see, while Tiger Woods 08 was good it left us with a large shopping list of potential improvements. The biggest issue was the way the game handled player skills in the central My Career mode, saddling you with an utterly useless golfer to begin with then practically forcing you through the rather gimmicky Tiger Challenge mode if you wanted any chance to improve. What’s more, the game was visually unimpressive. Sure, some small children were frightened by the Uncanny Valley Tiger of Tiger Woods 06, but at least it looked like the series was moving forwards into the HD future. With Tiger Woods 08, it seemed firmly stuck, as if EA had botched together assets from HD and non-HD versions of Tiger then tried to patch it all up with some ropey lighting. All those disparate onscreen elements never seemed to belong together. 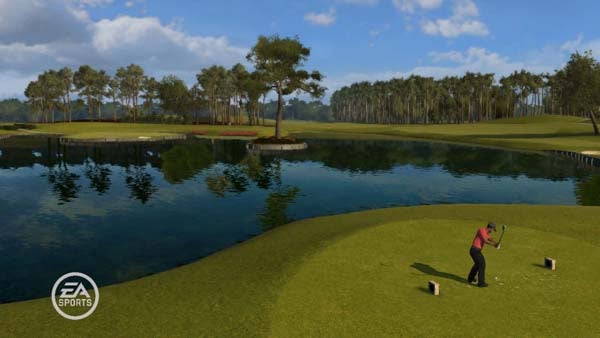 Tiger Woods 09 looks much better. EA seems to have fixed the models, the textures and the lighting so that it all meshes together as it should, and the improved water effects and touches like the breaking waves on the shoreline links courses make the game easily more impressive from a graphical standpoint. Sadly, it’s still not in the same league for character or environmental detail as Sony’s Everybody’s Golf: World Tour on the PS3, but at least it only looks slightly dated – and that’s mostly thanks to the ropey crowd animations and some dubious tree textures. 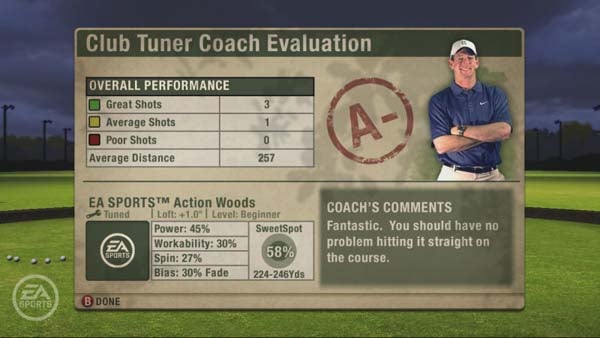 As with Tiger Woods 08, you can still import your own face into the game via uploaded photo or USB camera (the Xbox Live Vision camera for 360 owners). That means that if you’ve always wanted to see what you’d look like punching the air or shouting ‘get in your home’ in an irritating American accent, your dreams have just come true. In case you’re wondering, that’s my way of suggesting that a greater range of voices and animations might be nice. 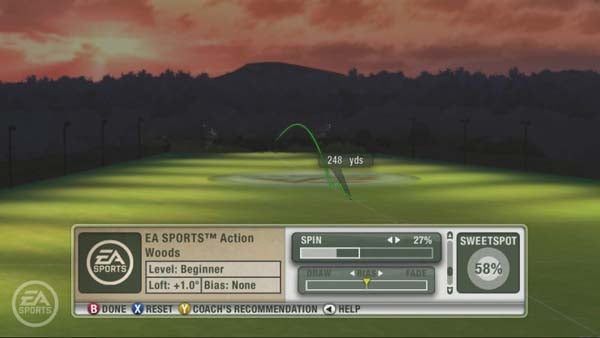 Now for the really good news. When you start a career your golfer is no longer painfully rubbish. Instead, the game arranges a quick test of your Tiger Woods skills then presents you with a set of attributes for driving, pitching and putting that go up and down as you play. You can now, if you want, take your new golfer straight out onto the PGA Tour and have a decent shot at making it into the top ten in your first tournament, and there’s no need to put your golfer through the alternative Tiger Challenge mode first. This works brilliantly. 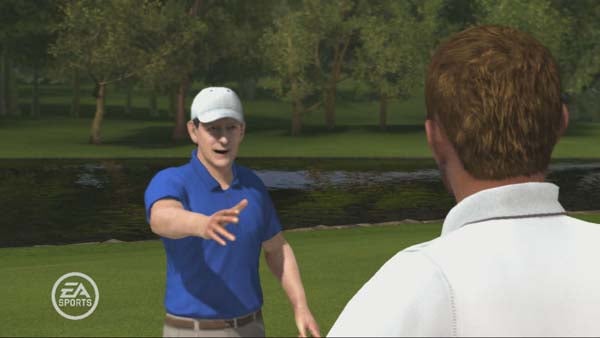 The Tiger Challenge itself now provides you with a brilliant set of challenges that test you on all areas of your game, including some excellent three to five hole one-on-one matches. The gimmicks and the mini-games have gone, and what you’re left with is some great ‘light bite’ golfing for those times when you haven’t got the stomach for the main course of a PGA Tour tournament. Your skills still go up and down according to your performance in either mode, but generally Tiger Woods 09 seems to have a more positive feedback loop, where the more you play the better you get. 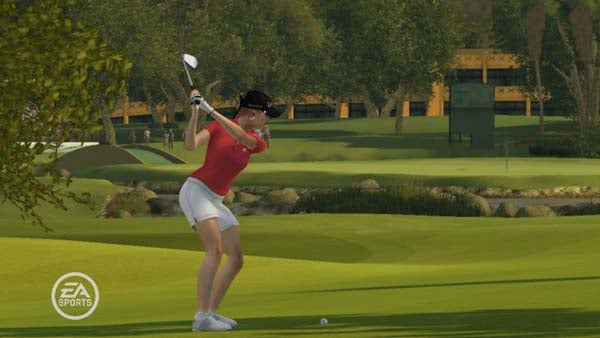 It helps that the controls are an awful lot better this time around. The analogue swing system is no longer absurdly sensitive, and the addition of a real-time shot meter makes it much, much easier to see where your swing is going wrong. The classic three shot system is still there for traditionalists, and while most of us would rather play with the putt preview and power boost systems switched on, you can opt out of these if you’d rather have a more realistic golf sim.

Those new headline features mentioned earlier also help a little. The performance coach – Tiger’s real life coach, Hank Haney – is supposed to watch your play and provide you with useful, custom exercises after each event to work out the wrinkles in the various aspects of your game. In actuality, the exercises are repetitive and don’t seem that well personalised, but for a while at least you’ll find them a useful way to experiment and work out what went wrong on particular shots (and you’ll also get boosts to your stats while you work out). The club tuner, meanwhile, allows you to adjust each club in the bag. Altering one aspect, like the length of the initial pre-bounce arc, will affect others, making it hard to build ridiculous super clubs, but if you have a persistent problem with hooking or slicing it’s possible to adjust your clubs to compensate. You can check out the results on the driving range, and even get advice from good old Hank on how effective your tinkering seems to be. 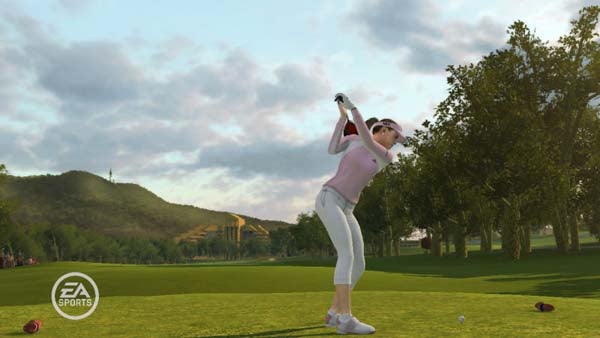 The icing on the cake for the lone-wolf Tiger Woods fan is the course selection, which is the strongest this generation to date (with 24 to Tiger 08’s 22). Sheshan Golf Club near Shanghai is a superb new addition, with lush, tree-lined holes that almost blind you to the menacing bunkers and fearsome, if beautiful, water hazards. Wolf Creek in Nevada is a stunning blend of green holes and desert scenery, while Wentworth Country Club will be a popular inclusion for UK golfers (just down the road from the TR office in fact).


Things get even better when you go online. First, EA has better integrated the EA Sports GamerNet features introduced last year, with more instant challenges that pop up while you’re just playing a round, and the chance to upload your own in minutes without spoiling the current game. Second, like Everybody’s Golf, it’s now possible to play three other players online simultaneously, each of you taking shots at the same time and watching as the other balls leave swooping coloured trails over the landscape. It makes the game much faster moving and more exciting, and once you’ve tried it it’s unlikely that you’ll want to go back to the old way of doing things. 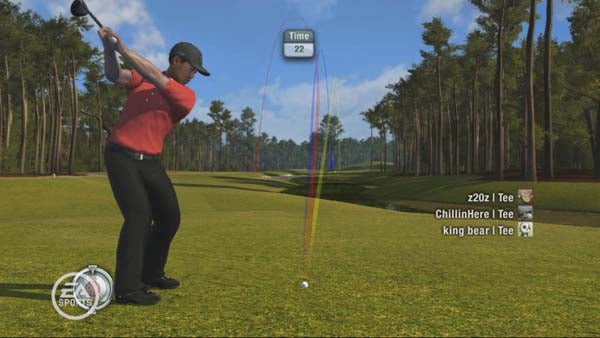 Overall, it’s hard to ignore the feeling that this is the game Tiger 08 could and should have been – something that will certainly annoy anyone who plumped up cold cash for last year’s iteration. However, while the differences aren’t huge by themselves, put them all together and this is a major improvement. If you didn’t buy Tiger 08, then you can happily buy Tiger 09 in the knowledge that you’re buying the best ‘serious’ golf game out there, even if PS3 owners with a copy of Everbody’s Golf: World Tour might disagree. The problem for EA is that, after this, it will be hard to make a case for a Tiger Woods 2010. I don’t imagine that will put EA off for a second, but after scratching for new features this time around, I can’t imagine what else there is to add.


A marked improvement on Tiger Woods 08. Despite some graphical disappointments this is the HD-era golf game we’ve been waiting for (if you don’t count Everybody’s Golf: World Tour).