What is the Thrustmaster TX Racing Wheel Ferrari 458 Italia Edition?

The Thrustmaster TX Racing Wheel Ferrari 458 Italia Edition is a high-end racing wheel – as fancy as you’ll find on the high street. There are more advanced models available from specialist companies such as Fanatec, but for many the upgrade and expense will be overkill.

This is a great wheel, with advancements that rival Logitech doesn’t offer with its current models. However, at £259 it’s a hefty investment, and if you really get into sim racing then you may want to replace the pedals as well. 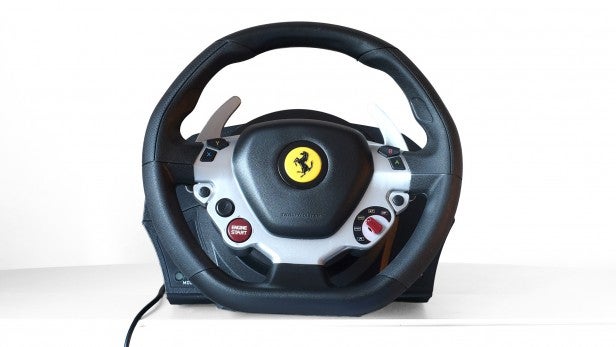 Thrustmaster makes several racing wheels at this price point. I reviewed the Thrustmaster T300 RS and T300 GTE last year, and this version is similar but has a different wheel and buttons.

It’s designed to look just like the steering wheel of the real-life Ferrari 458, complete with an engine start button. Of course, since racing games don’t generally make you actually start up the car, it will be mapped to some other function. 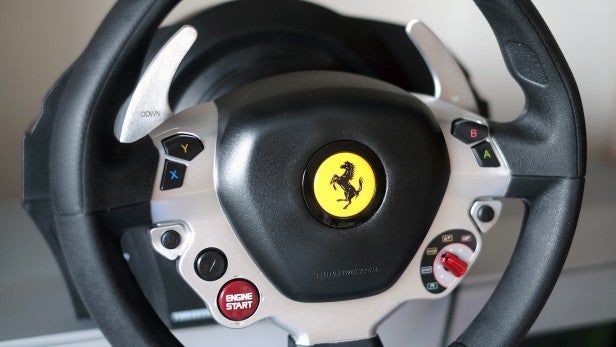 Like other Thrustmaster sets around this price, the outer part of the wheel is made largely of plastic and rubber. The TX Racing Wheel Ferrari 458 Italia Edition is grippy, solid, and has a metal skeleton inside – but it’s missing the luxurious touch of the Logitech G29’s leather-clad rim, despite this one having a more striking look.

Thrustmaster’s system allows upgrades, though. The wheel detaches from the base, and you can pick up Alcantara and leather wheels if you’re after a more expensive feel. They cost around £140.

Normally the Thrustmaster TX Racing Wheel Ferrari 458 Italia Edition works with Xbox One and PC only, but the firm sent us a version that works with PS3/PS4 and PC instead. I’m not entirely sure why this setup isn’t readily available at the Thrustmaster store, but it simply involves using the T300 wheel base instead of the TX one. 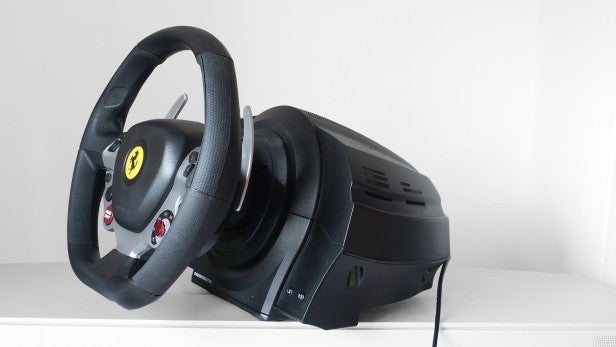 The difference? The T300 version we’re using has a switch to flick between PS3 and PS4 modes, and wheel rotation is 1,080 degrees, rather than 900. They use the same brushless force feedback motors, though, which is the main factor of a wheel’s performance.

The Thrustmaster TX Racing Wheel Ferrari 458 Italia Edition wheel has buttons that map to the Xbox One controller’s main buttons, although without a D-pad you’ll still want a gamepad to hand to flick through the console’s menus. Both the T300 and T300 GTE have a D-pad, which makes this version seem like the most PC-focused wheel of the trio. 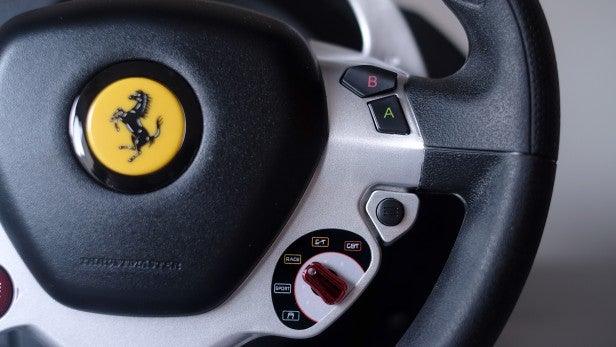 Removed from the base the wheel feels surprisingly light given how solid it seems during play, but Thrustmaster has at least made some of the more important parts out of metal. The aluminium paddle gear-shifters have a satisfying click to them, as good as those of any wheel around £300.

Those after a proper gearstick will have to buy one separately. The TH8A geabox costs £130. 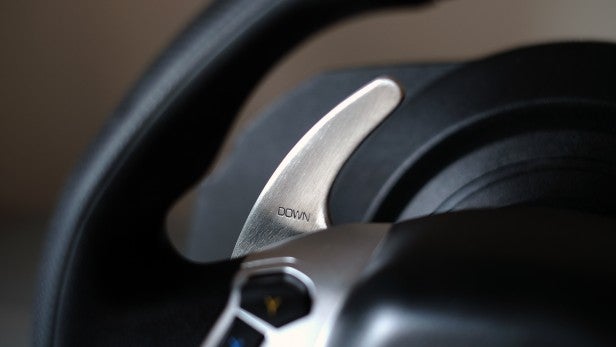 The Thrustmaster TX Racing Wheel Ferrari 458 Italia Edition’s force feedback matches the best in this class. It’s very powerful, enough to give you arm ache after a while if you max out the feedback’s strength.

If you haven’t used a force feedback wheel before, it can both reduce your lap times and hugely increase immersion. The wheel will go slack if your car ends up in the air after taking a bump in the road at 90mph, and you’ll feel the resistance of the wheel drop as the tyres lose grip after taking a corner too quickly. Wrestling with a racing wheel is like a conversation with your car or, more often than not, a blazing row.

Even if you drive in a 20mph zone, you’ll feel the extra resistance of the road’s friction against your wheel turns. Force feedback is what stops a racing wheel from feeling like a plastic toy.

Of course, if you’ve used a wheel such as this before, you know the drill. 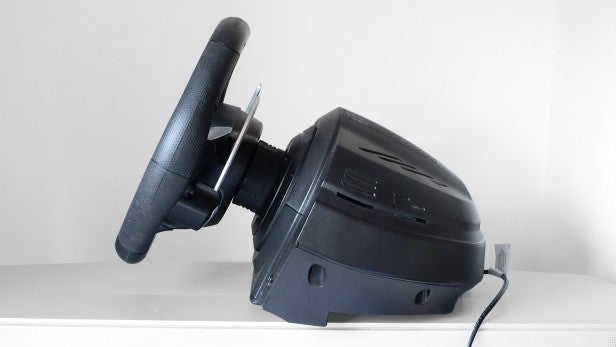 What makes the Thrustmaster TX Racing Wheel Ferrari 458 Italia Edition better than the T150 or the Logitech G29 is how its force feedback operates inside. This wheel has a brushless, all-belt-driven system, where the G29 uses sets of gears.

It gives this wheel a much smoother feel, where all the cheaper force feedback wheels (I’m counting the T300 wheels as the same price here) have a “notchy” character. You can still feel the gnawing of the motor, particularly when you’re holding the wheel still and the resistance increases during one of those Fast & Furious-worthy turns, but to get rid of this you’ll have to pay a lot more than £250. 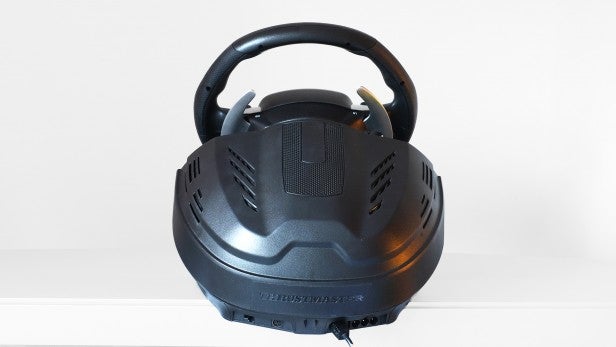 The force feedback is excellent with well-suited titles such as Project Cars and Dirt Rally, and this is the main reason to buy a Thrustmaster TX Racing Wheel Ferrari 458 Italia Edition over a Logitech G29.

There are other benefits, too, though. The belt system is much quieter than Logitech’s geared feedback, which causes some almost violent-sounding clangs attached to the wheel stand I use. 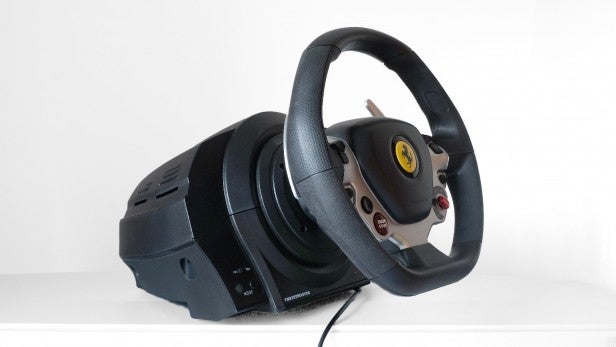 Since the belt feedback causes more heat than a geared system, the Thrustmaster TX Racing Wheel Ferrari 458 Italia Edition has a fan that kicks in after 10-20 minutes’ use, and you’ll notice it if you have the sound down low. Put your hands against the vents on the base and you can feel the air pouring out. However, I find it far less distracting than the G29’s motor noise. 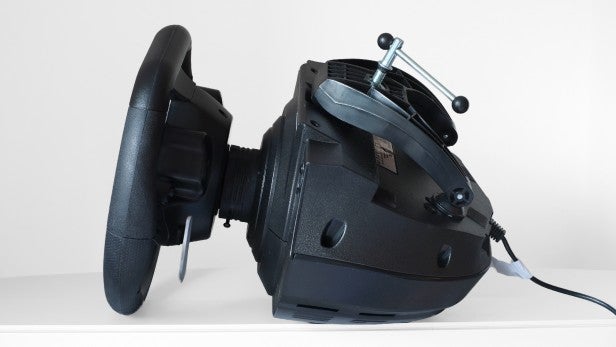 The wheel has a simple plastic mount

If the budget is a real concern, there are still reasons to consider the Logitech G29 instead. As well as a nicer-feeling wheel, the Logitech has better pedals than the Thrustmaster TX Racing Wheel Ferrari 458 Italia Edition.

The board used here has just two pedals and is mostly plastic, simply adding a couple of metal plates on the parts you actually touch. Aside from these metal parts, and perhaps a little more resistance, the pedals seem very similar to those of the cheaper Thrustmaster T150. 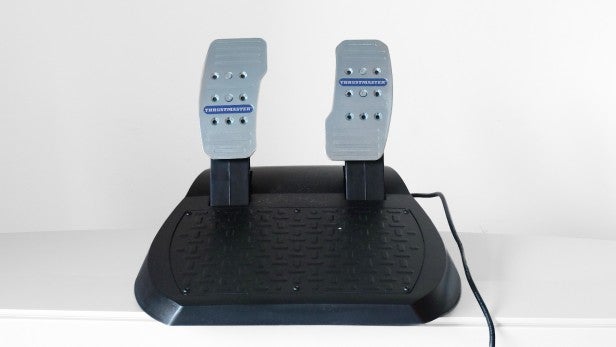 Once again, Thrustmaster works the upsell angle. You can buy a much better three-pedal board, the T3PA, or the even more impressive T3PA-PRO (direct from Thrustmaster) if you have a generous budget.

As someone who only tends to bring out a racing wheel a few times a year because of the sheer faff of setting it up, I’d be perfectly happy with the Thrustmaster TX Racing Wheel Ferrari 458 Italia Edition’s standard pedals. There’s a decent amount of resistance and the brake is slightly progressive (it gets harder to press through its travel). However, the Logitech G29’s pedals are simply better. 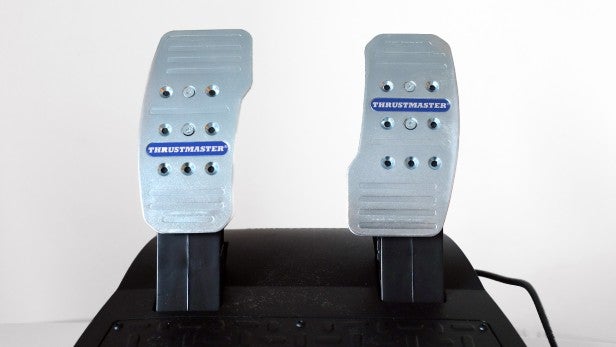 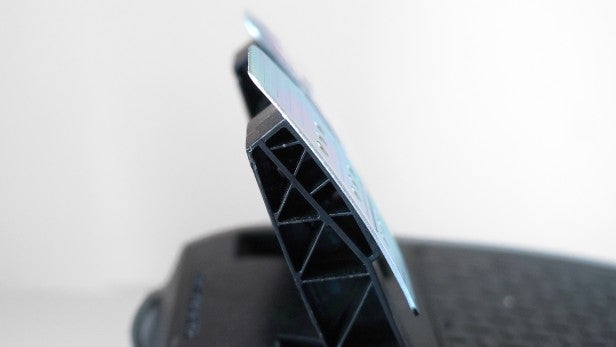 Thrustmaster allows you to significantly upgrade parts of the TX Racing Wheel Ferrari 458 Italia Edition that seem a little low-end in comparison to those in the cheaper Logitech G29. However, Thrustmaster still offers the best wheel bases you can get at the price; the quality of the force feedback really benefiting from its brushless, belt-driven system.

For those with this budget, the question becomes whether to buy the TX 458, the T300 RS or the T300 GTE. The main differences revolve around the wheel included.

The Ferrari replica is a good choice for PC gamers, but both other models are perhaps better for the console crowd; the T300 RS for PS4 owners and the T300 GTE for the Xbox One bunch. They have D-pads to let you control your console completely from the wheel; there isn’t one included D-pad here.

Those other models also have a bit more metal on show, where the Ferrari moulding here is plastic. But it does look neat if you’re a Ferrari fan.

A great force feedback wheel, particularly if you’re willing to consider some upgrades down the line.