A great throttle, together with a decent joystick. For the price the T.16000m is an easy purchase for those looking to eke even more enjoyment out of their favourite flight simulator.

What is the Thrustmaster T.16000m FSC HOTAS?

The T.16000M is a HOTAS (Hands On Throttle And Stick) setup made up of a joystick and a separate throttle controller. Both are absolutely covered in buttons.

It’s the latest iteration of the Thrustmaster’s high-end gaming joystick. The design was originally conceived to be a solo controller, which is the reason there’s a throttle slider on the joystick and a few other legacy quirks, too. In case you’re wondering, the hat switch can be seen protruding from the top of the joystick

The stick is home to four buttons (three and a trigger), as well as a single hat switch on the top. The base of the joystick has 12 buttons and a slider. The buttons on the base sit in groups, with some braille-like marking on them to help you tell them apart. The joystick allows twist movement as well as the usual roll and pitch, so you don’t need separate pedals. Nevertheless, this setup is compatible with T.Flight Rudder pedals, T.A.R.G.E.T. software and MDF Cougar systems.

In theory you can use this joystick left- or right-handed, but since the throttle is entirely modelled to fit the left hand, this isn’t very helpful – unless you actually have two left hands.

The design of the T.16000M hasn’t changed for years and there’s a reason for that – it’s so good, it just works. But when you put it next to the throttle it does feel a little dated. I’d have loved to have had another hat switch on the joystick and maybe another button on the main stick, too. 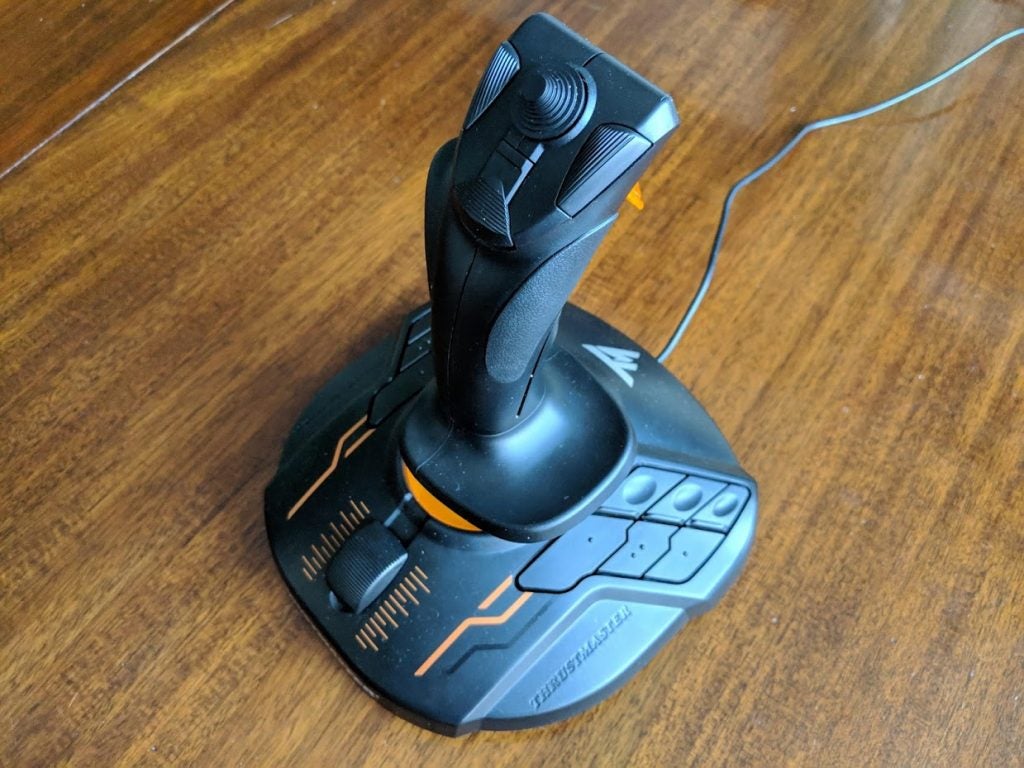 Need buttons? The Thrustmaster T.16000M FSC HOTAS has them in spades.

The throttle, however, is brilliant. The action is linear rather than about a point. As such, you slide it forward rather than push it around points. All the buttons are on the throttle handle; there are none on the body. Neatly sitting under your fingers are three hat switches, two rocker switches, three buttons and a special analogue hat switch that behaves more akin to a gamepad thumb stick. Each hat has a different shape, thus you can instantly determine which one you’re using.

The throttle fits your left hand like a glove, putting a multitude of controls at your fingertips.

All three normal hat switches and one of the buttons are laid out to sit under your thumb, with your remaining fingers dealing with the rest. The analogue hat switch rests under your index finger, which allows you to move it with exacting precision. 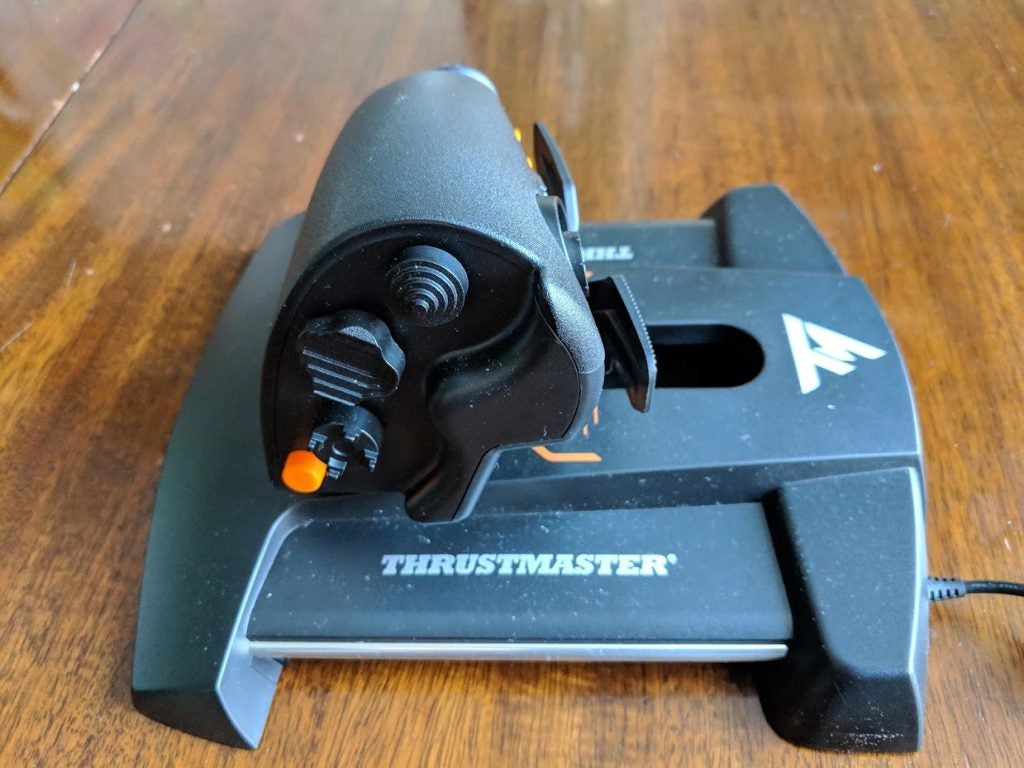 A side look at the Thrustmaster T.16000M throttle’s thumb controls.

It’s a lot of buttons for a single hand to control, but with each one within easy finger reach and no reason to take your hands off the throttle, it soon becomes second nature. The analogue hat is especially good for lateral thrusting in Elite, allowing you to be far more precise than you could be with a simple digital switch.

On the bottom of both base units are holes, allowing you to attache the units to something – and, in gerneral, the quality of construction is good. The trigger on the joystick feels a little fragile but I didn’t experience any issues, even during extreme testing. Fighter pilots will at first feel the need to go easy here, since the trigger button feels less robust than it is.

Each part runs off a separate USB, so you could use them individually. Some people like to use dual T.16000m joysticks for some flight-sims. The throttle is so good that you’d be silly to not use it.

That’s my main criticism of this HOTAS. The throttle is better than the joystick, and the joystick is perfectly fine in its own right, but when your left hand is dealing with more than three times the buttons, hats and switches than your right hand, it feels unbalanced. The decision to abstain from adding a few more buttons to the stick seems like a missed opportunity. On the plus side, if you’re a southpaw like me, this HOTAS controller configuration is actually better-suited than most, but right-handers might struggle.

The X52 Pro from Saitek is about the same price, it has a more complex joystick than the T.16000m, but the throttle is nowhere near as innovative. Apart from that, there aren’t a lot of HOTAS flight sticks to pick from at this price point. If you don’t want to invest as much, the T.Flight One is cheaper, or if you want up to 55 buttons then the Thrustmaster Warthog is amazing.

While the T.16000m’s joystick is great, the throttle is the real star of the show here. Combined, you have a great setup at a price that’s hard to beat.