What is the Thrustmaster T150 Pro?

The standard Thrustmaster T150 is one of the most popular racing wheels for the PS4 and PC. Sitting above that, but below the Thrustmaster T300 RS, is the Thrustmaster T150 Pro. You get the same belt-driven force-feedback wheel as the T150, but paired with the more advanced T3PA pedal set – adding a clutch pedal and an optional brake mod for a more realistic feel.

With a greater number of retailers offering the Logitech G29 for almost the same price as the T150 Pro, it puts the two in direct competition. But which of these racers comes out ahead? 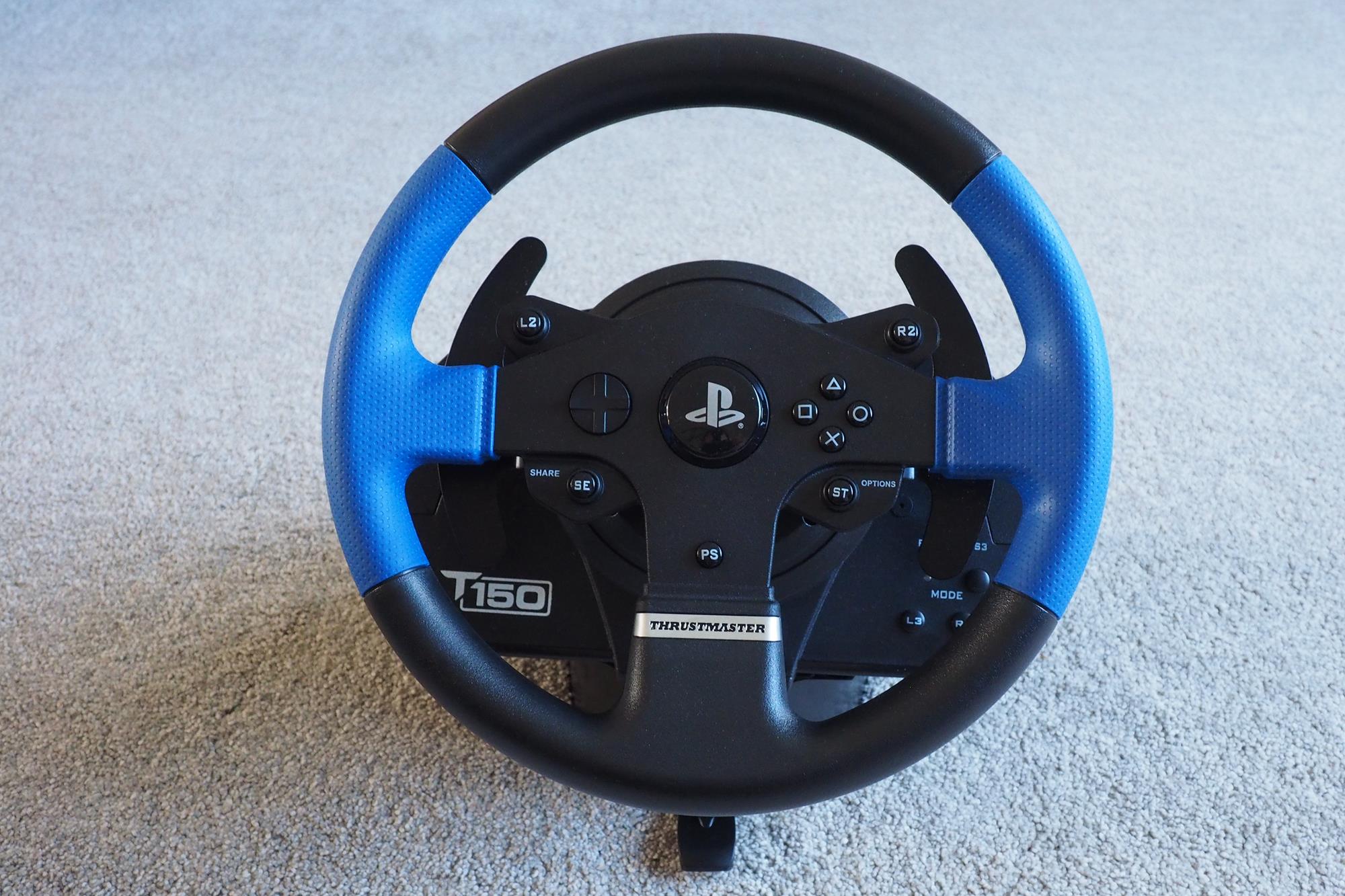 The T150 Pro’s wheel feels okay in the hand. It’s rubbery, rather than having the leather wrap of the Logitech G29 or its 300RS sibling, but it isn’t unpleasant. It’s grippy and chunky. It doesn’t have a centering band at the top, but that isn’t a big deal.

Nearly everything else on the wheel is made from tough plastic, apart from the paddle-gear shifters. Those are metal, although they feel a little flimsier and less positive to switch than those on the G29.

As with the T300 and Thrustmaster’s flagship T-GT, you get 1080-degree rotation of the wheel. The Logitech only offers 900 degrees of turn from lock to lock.

The wheel also features just about all the buttons you’d find on a regular PS4 pad – bar the sticks and the touchpad – so there’s no need to keep a DualShock 4 beside you as you play.

The only mounting option is a simple but secure clamping system – there are no screw threads on the bottom for hard mounting. This presents a problem with certain cockpit seats, such as the popular Playseat Challenge. I’ve seen talk on some forums of a separate attachment kit for hard mounting the T150 Pro, but mine didn’t come with anything other than the clamp. 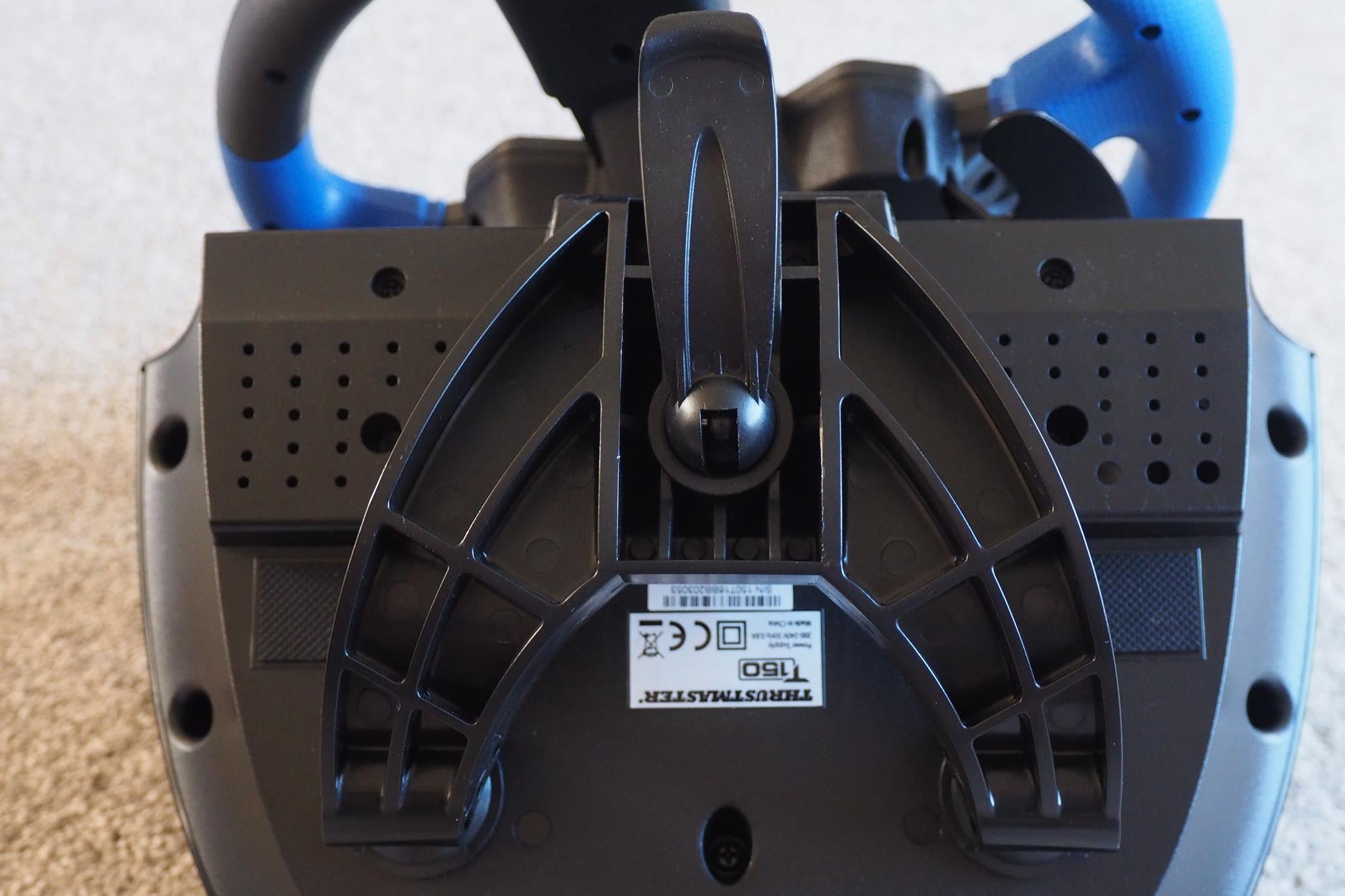 The T3PA pedal set is a real step up from the two-pedal board you get with the T150. Sadly, it’s still made mainly from plastic, but it feels sturdy enough. The big upgrade is the conical brake mod that’s supplied in the box for optional installation. Screwing this in gives a more realistic, progressive feel to the brake pedal. 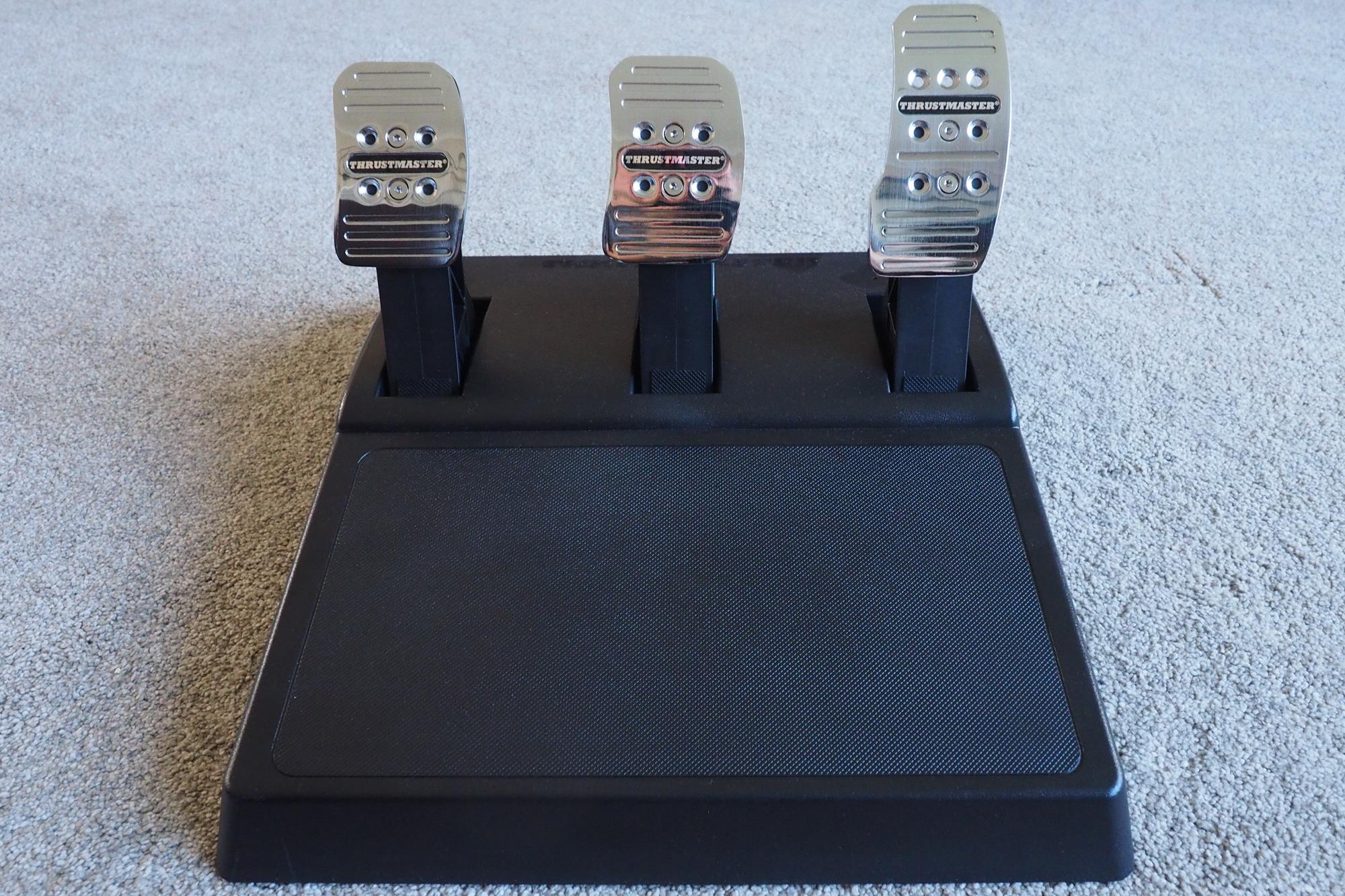 Despite the additional clutch pedal, there’s no separate gear stick included with the T150 Pro, so you’ll be using those paddle shifters – unless you buy the TH8A shifter separately. That costs a whopping extra £129.99, though – which compares badly with the £44.99 for Logitech’s stick. The TH8A can be converted to a sequential shifter, however.

Force-feedback wheels use motors controlled by signals from your chosen racing game to provide realistic physical feedback from the car’s steering. Get into a slide and you’ll be fighting the wheel. Put a tyre on the gravel and you’ll feel the rough ride through your hands. Force-feedback wheels give you a better connection to the car and the track. They even give you a better sense of speed.

And the belt-driven force feedback on the T150 Pro is excellent – as fast and powerful as the T300 or Logitech G29, really tugging against you if you turn under speed and fight to keep traction in games such as Project Cars 2 or Gran Turismo Sport. Turning the wheel feels a little rougher and notchier than the G29, but it isn’t necessarily less precise.

Like the T300, the Thrustmaster T150 Pro has a fan that kicks in after you’ve been using it for 20 minutes, which might be a little distracting if your game volume is dialled right down – but it’s essential to keep the belt-drive cool. 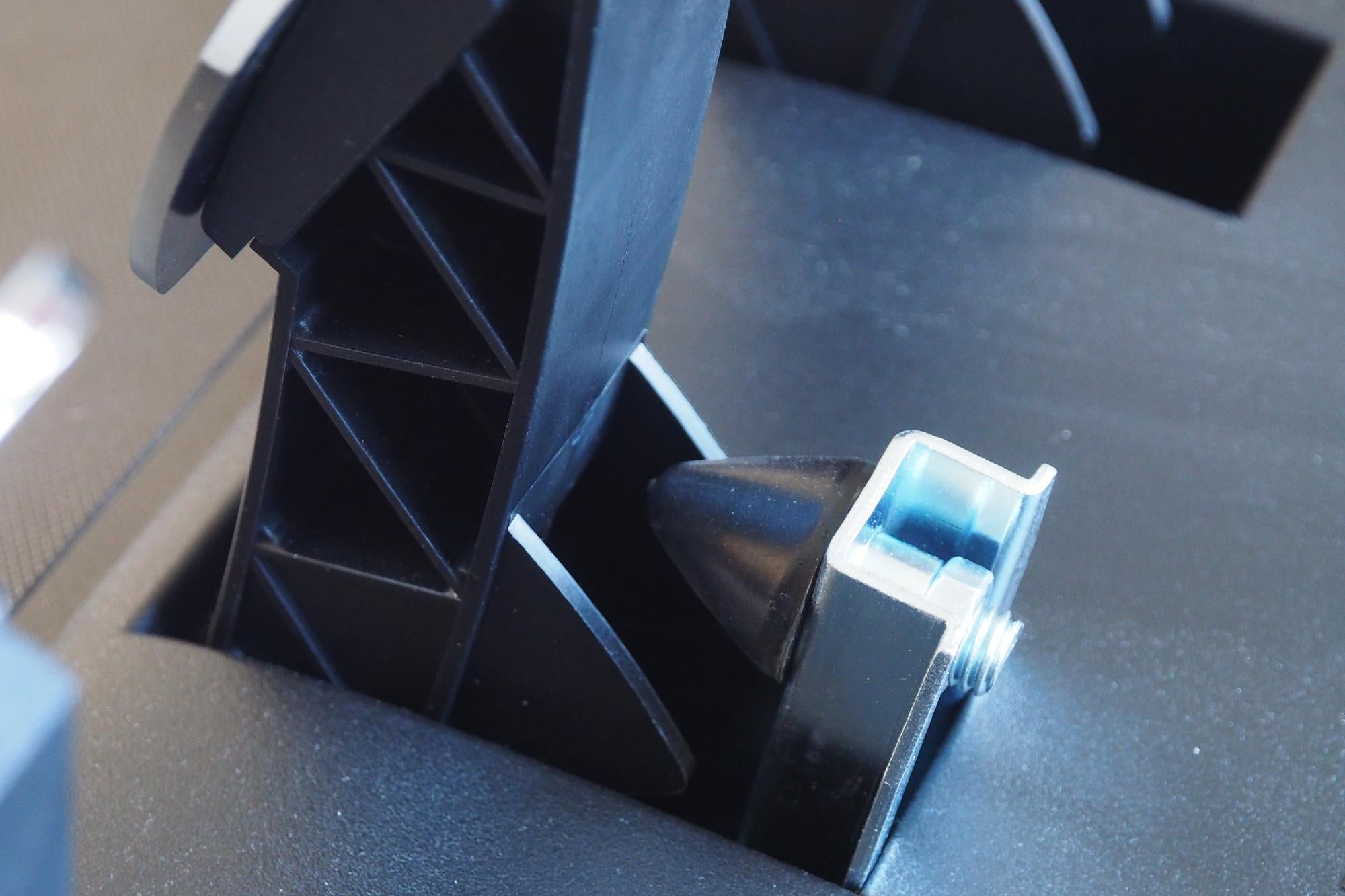 The T3PA pedals are generally very good, despite the plasticky construction. You’ll definitely want to bolt in the conical brake mod if you want that stamp-the-brakes resistance, though. Without it, the three pedals feel almost identical – which is fine for youngsters who can’t apply so much pressure. You can also adjust the plates for height and spacing, just by bolting them in different positions. 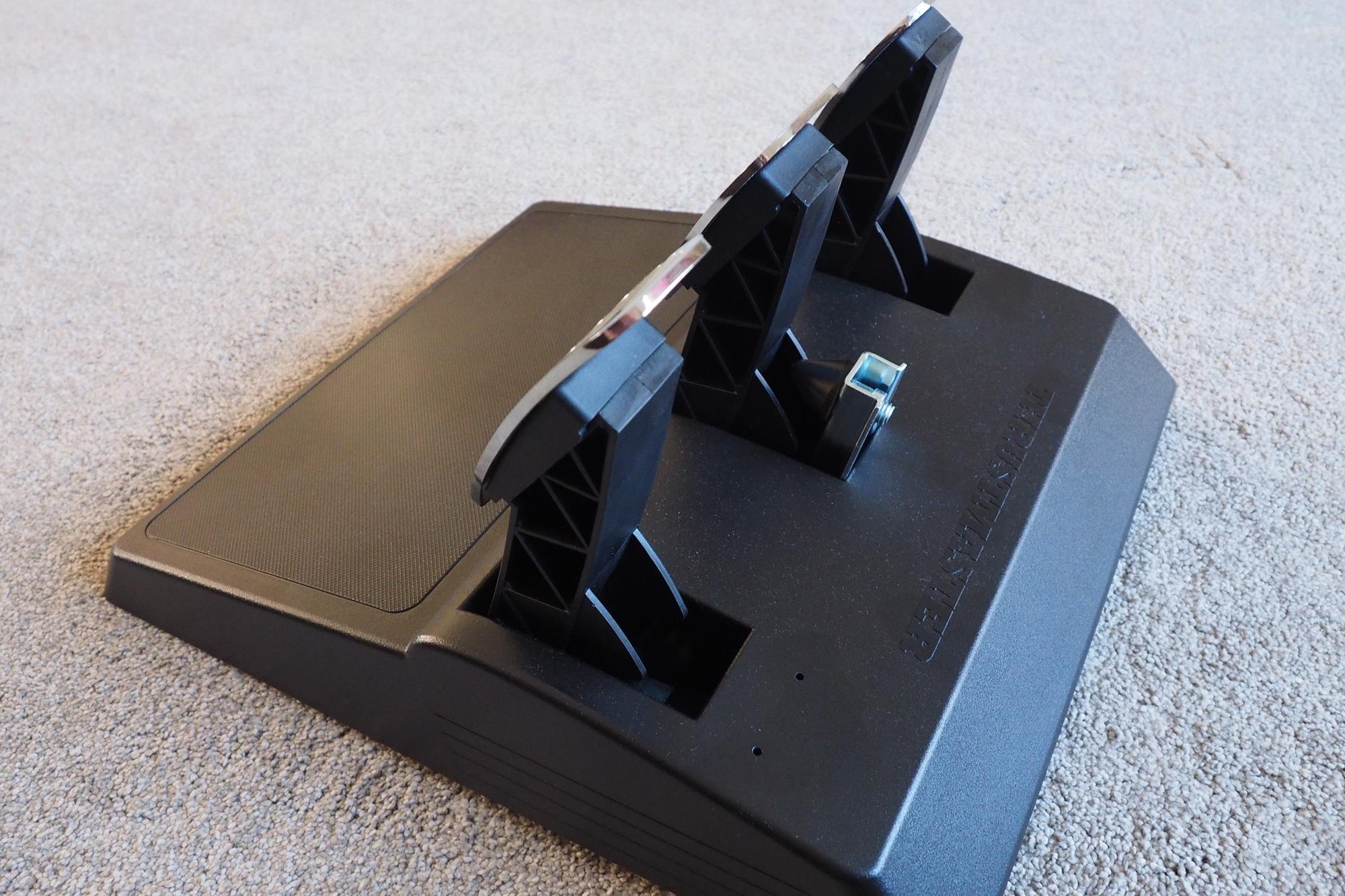 Why buy the Thrustmaster T150 Pro?

The T150 Pro is a bit of an odd one. The wheel itself has proven to be an excellent entry-level choice, with great force feedback at a decent price. It’s lacking the premium leather covering and hard-mounting options of pricier competitors, but that’s the reason it’s cheaper.

Coupled with the T3PA pedals in the Pro set, however, the price premium means it doesn’t offer quite the same value. And the only gearstick option is the expensive Thrustmaster TH8A, so that added clutch pedal might not even get a workout.

Right now the Logitech G29 plus shifter makes more sense as a three-pedal setup. Or step up to the superb Thrustmaster T300RS GT Edition, if you can afford to splash the extra cash.

A great force feedback wheel with a triple pedal set, but maybe not the best value.