What is the Thrustmaster T-GT?

Is Gran Turismo Sport your racing game of choice? Then this is the racing wheel and pedal set for you – if you can afford it. The T-GT is Thrustmaster’s force-feedback wheel, designed specifically for the PS4-exclusive GT Sport, with feedback optimised for that game.

This doesn’t mean the usual steering feedback won’t work in other racing games, but in order to justify the T-GT’s premium price, you’ll want Gran Turismo to be your primary driver. 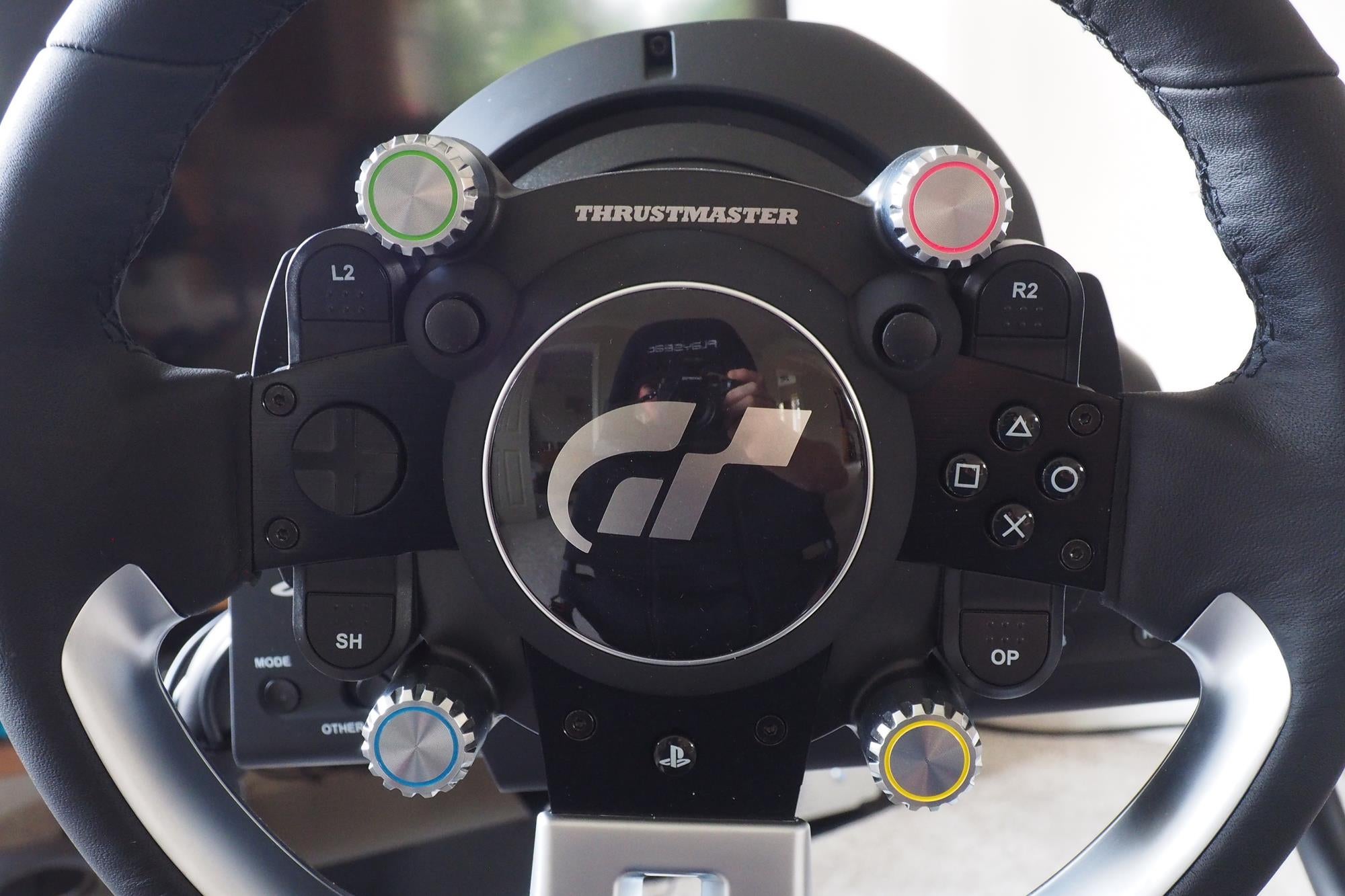 The steering wheel is a two-part affair, with a hefty base and detachable wheel. The base has the usual Thrustmaster table clamp, as well as a pair of screw lugs for hard-mounting it to a proper cockpit.

I fitted it to the Playseat Challenge, which folds away for easy storage, but requires some DIY work if you want to mount a gear stick.

The wheel is mostly a lovely thing, with a superbly smooth but grippy leather covering, a stitched blue centre indicator, and a pair of positive-feeling, compact metal paddle shifters.

The control mapping is superb; there are all the usual PS4 buttons, plus two analogue sticks and four large rotary selectors. Those rotary knobs are another GT-specific addition, with each one able to tweak your car settings on the fly.

The wheel isn’t quite full-sized, however, and there’s plenty of plastic involved – which is a shame at this price.

The reason for it being detachable is that you can replace it with other compatible wheels, such as the 1:1-scale Sparco R383 rally wheel. But this is only for PC gaming; add-on wheels don’t have the necessary PlayStation controls. 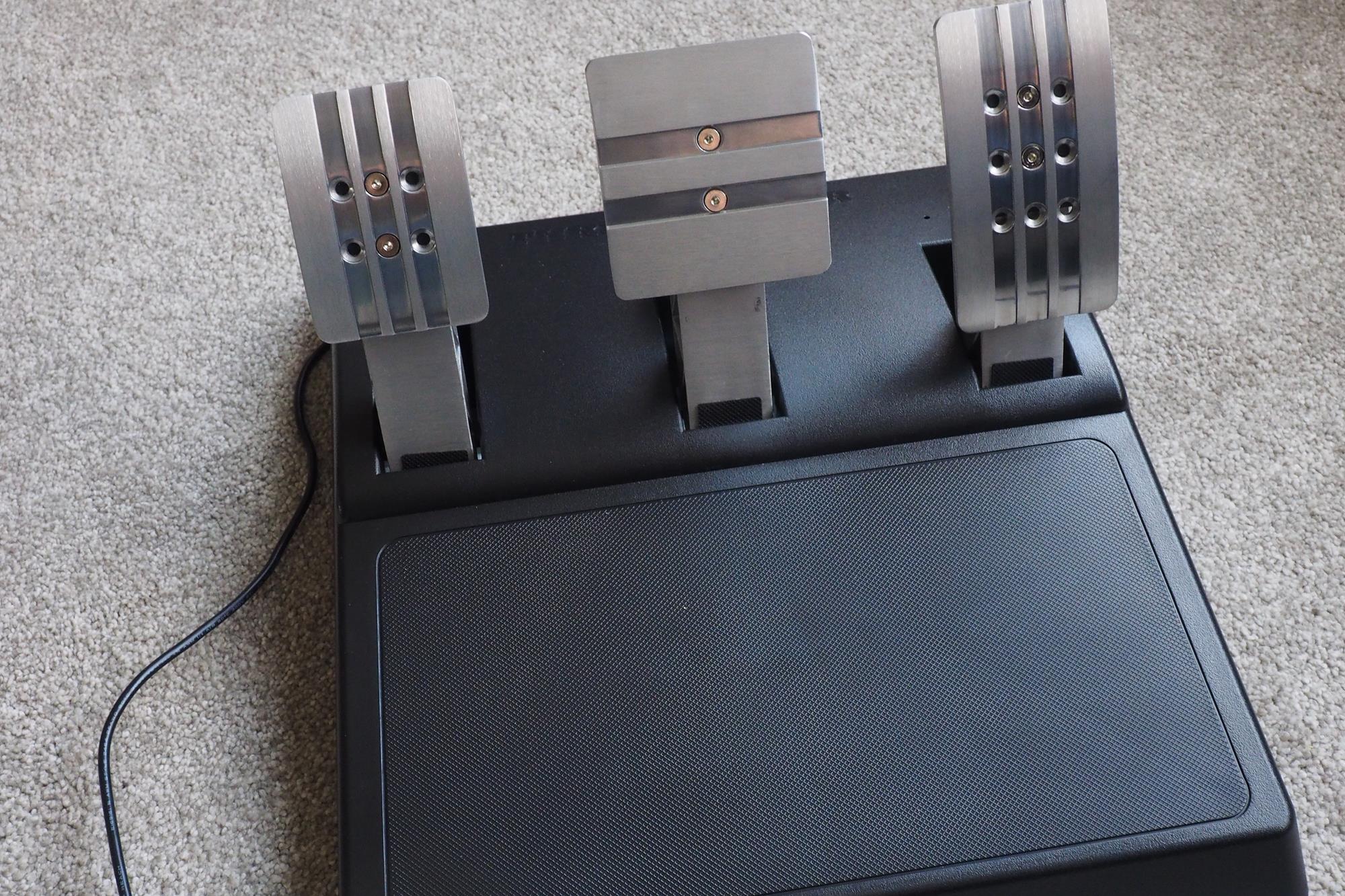 The supplied three-pedal set is the T3PGT, which looks and feels almost identical to the T3PA supplied with the T150 Pro and T300RS GT Edition. It even sports the same GT Edition brushed-pedal plates as the latter, which can be adjusted for height and spacing.

You also get the same conical brake mod in the box, which you should definitely fit for a more realistic progressive feel. Crucially, though, the pedal arms on this upgraded model are made from metal, so it should be more robust than the T3PA.

Despite the three-pedal board (and high price), there’s no gearstick included to go with that clutch. The TH8A shifter is an expensive £129.99 add-on, but it’s a quality item and can be converted from gate shift to sequential. 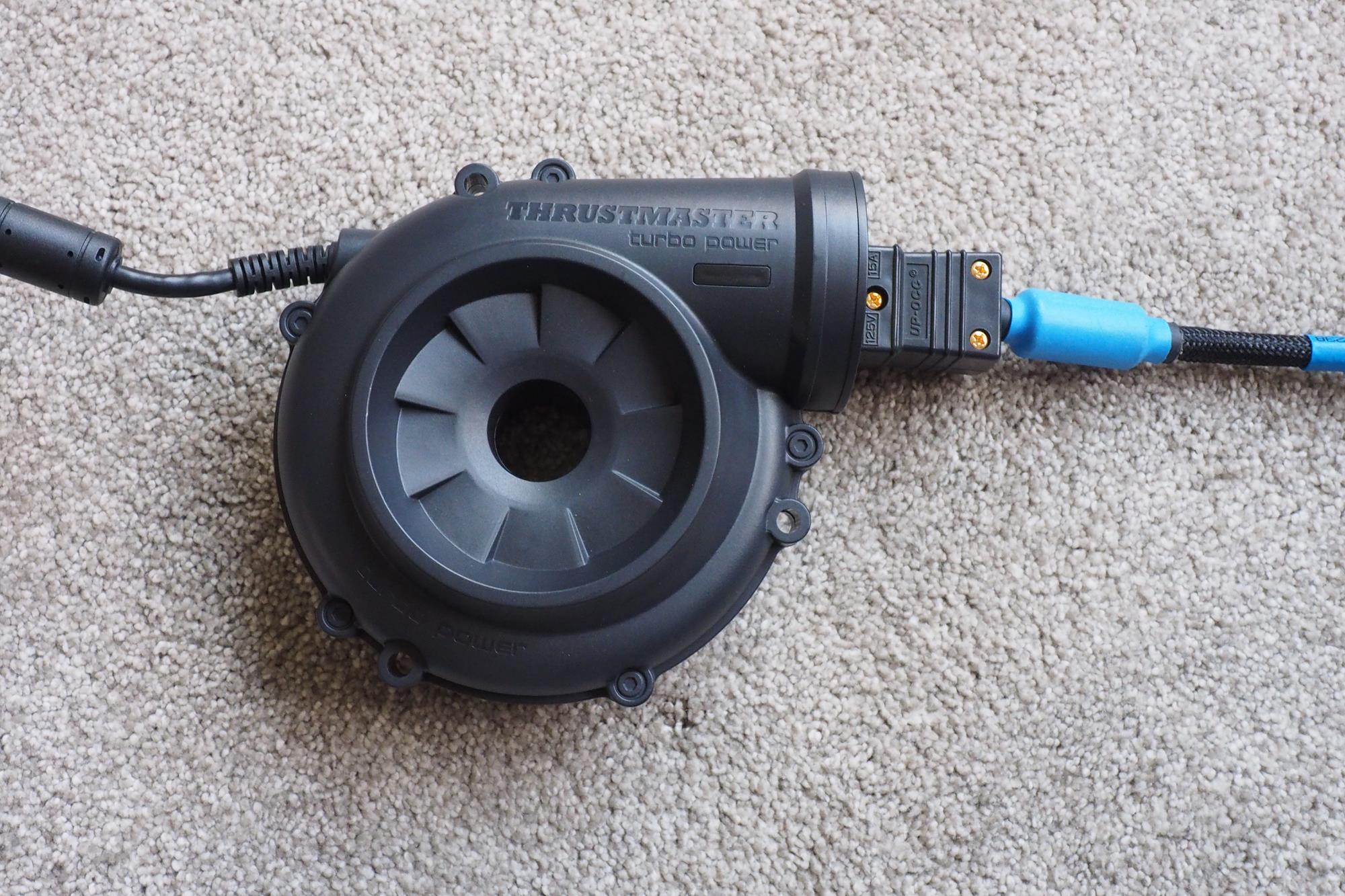 Let’s spare a moment to talk about the T-GT’s power supply. No, really. I can’t recall many products –except maybe in the world of high-end hi-fi – where the mains transformer has been given any design thought. Black plastic boxes abound. Thrustmaster has laid down the gauntlet here, though, styling it after a car’s turbocharger.

It’s a work of art. To match the aesthetic (and for extra geek points), I swapped out the supplied kettle lead for £150 of braided Merlin Black Widow mains cable. Sad, but true.

Although the T-GT has been designed to work best with Gran Turismo Sport, it will work with most racing games for the PS4 and PC. Just remember to flick the special selector switch from ‘GT’ to ‘Other’. 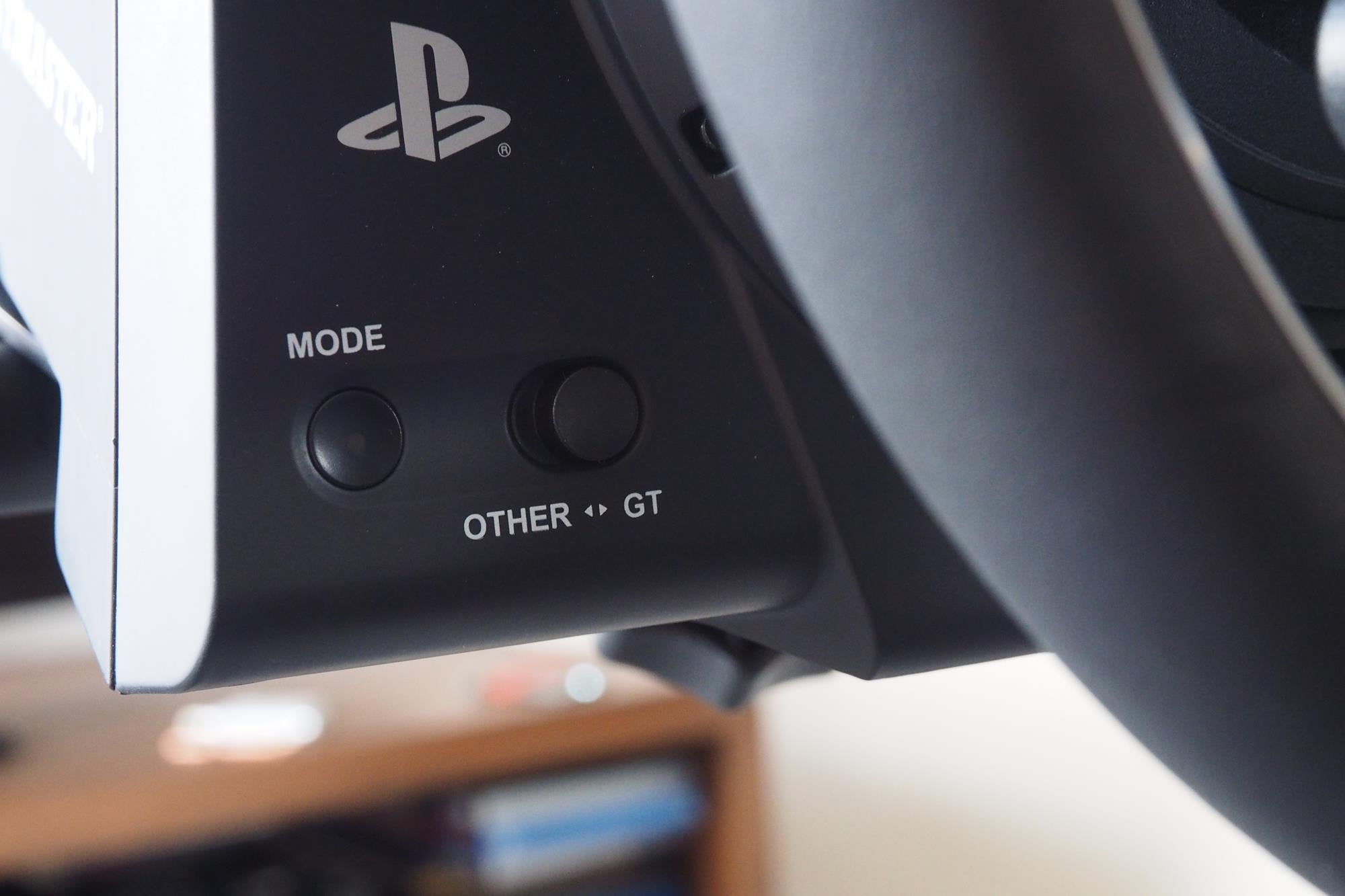 If you’ve never used a force-feedback wheel before, you don’t know what you’ve been missing. You can’t get close to the sensation of driving, through a console or PC, without one. Winning races using a gamepad? Come back to me when you’re on the podium after wrestling a steering wheel and giving your clutch leg a workout.

The T-GT wheel uses dual belts for smooth, strong feedback. It really pulls hard and fast – with minimal notchiness – albeit with a slight roughness. Try to take a corner too fast and you’ll be fighting to keep the tail whipping round; put a boot on the curb and you’ll get shook up through your arms and shoulders.

I found the default feedback level in GT Sport to be a little on the light side, so it’s worth ramping up a little. The extra ‘depth’ feedback is also subtler than you might expect, mostly emitting a low rumble, but it definitely adds a new dimension. On the other hand, with Project Cars 2 – where the T-GT is recognised as a Thrustmaster T300 RS (if you remember to push the mode switch to ‘Other’) – I had to whack the feedback gain right down to avoid seriously aching hands. 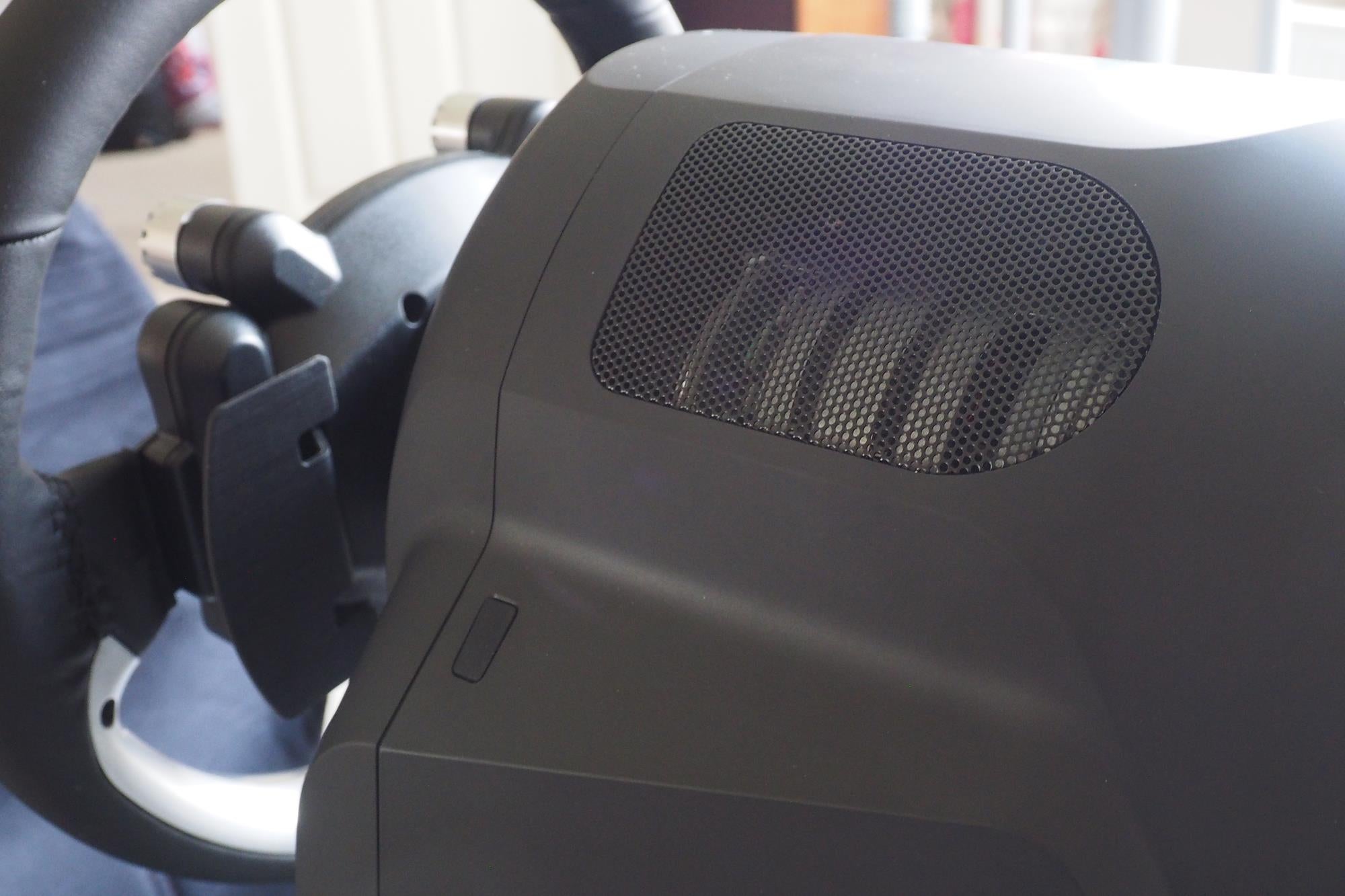 As with all belt-driven wheels, be prepared for the whirring of fans cooling the belts. Keep your game volume up and you won’t notice, though. 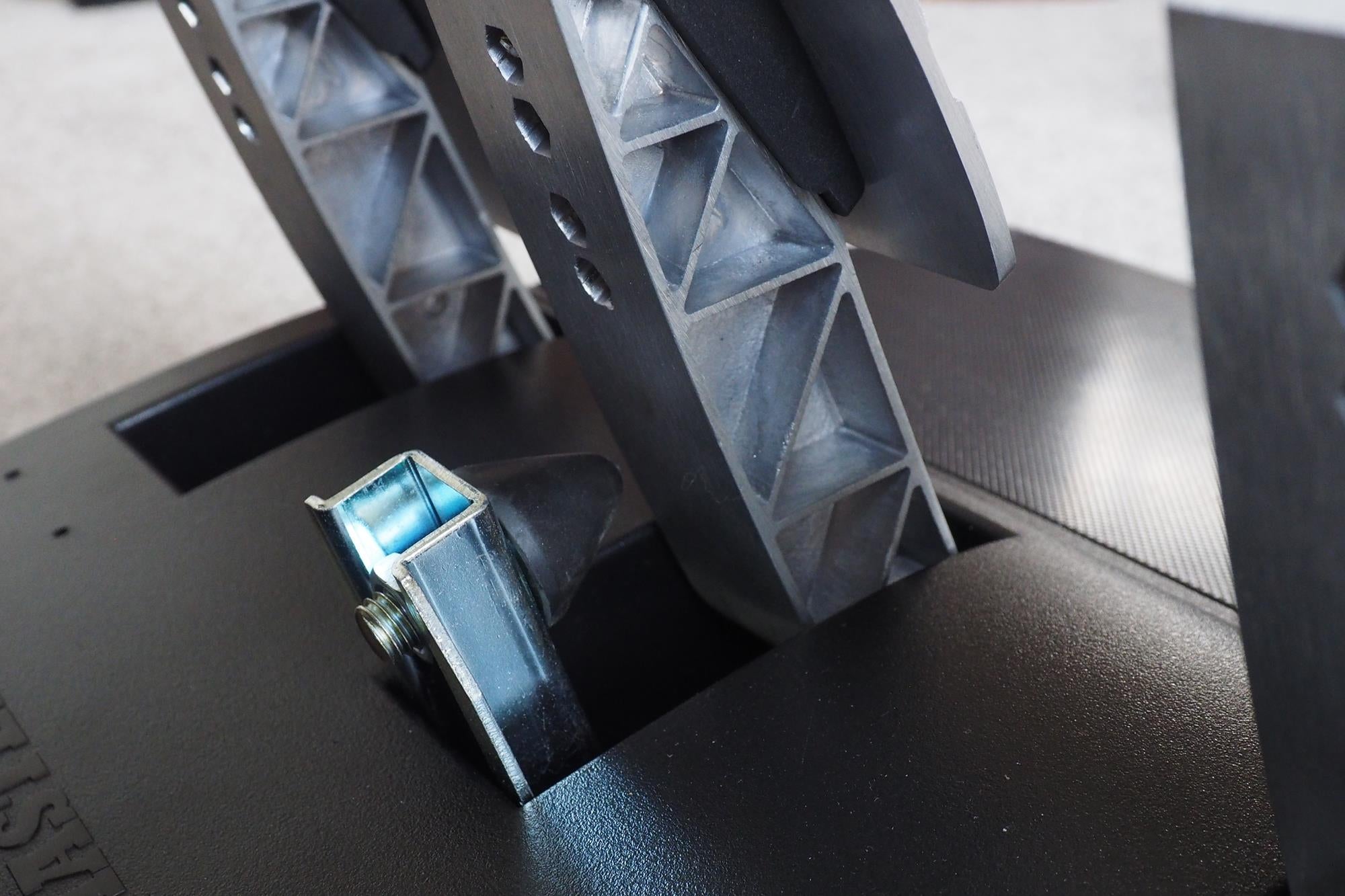 Dropping down to the pedals and the T3PGT set has a long, smooth travel through the accelerator. The clutch feels almost identical – I’d like it to be a little heavier, to be honest, although I didn’t have a TH8A shifter on hand to get a good feel for it. I’ll update this review if I can get Thrustmaster to send one over.

Thanks to the conical mod, which screws in with a single Allen bolt, the brake pedal does give some decent resistance – you need a good stamp to put the pressure on when late-braking. 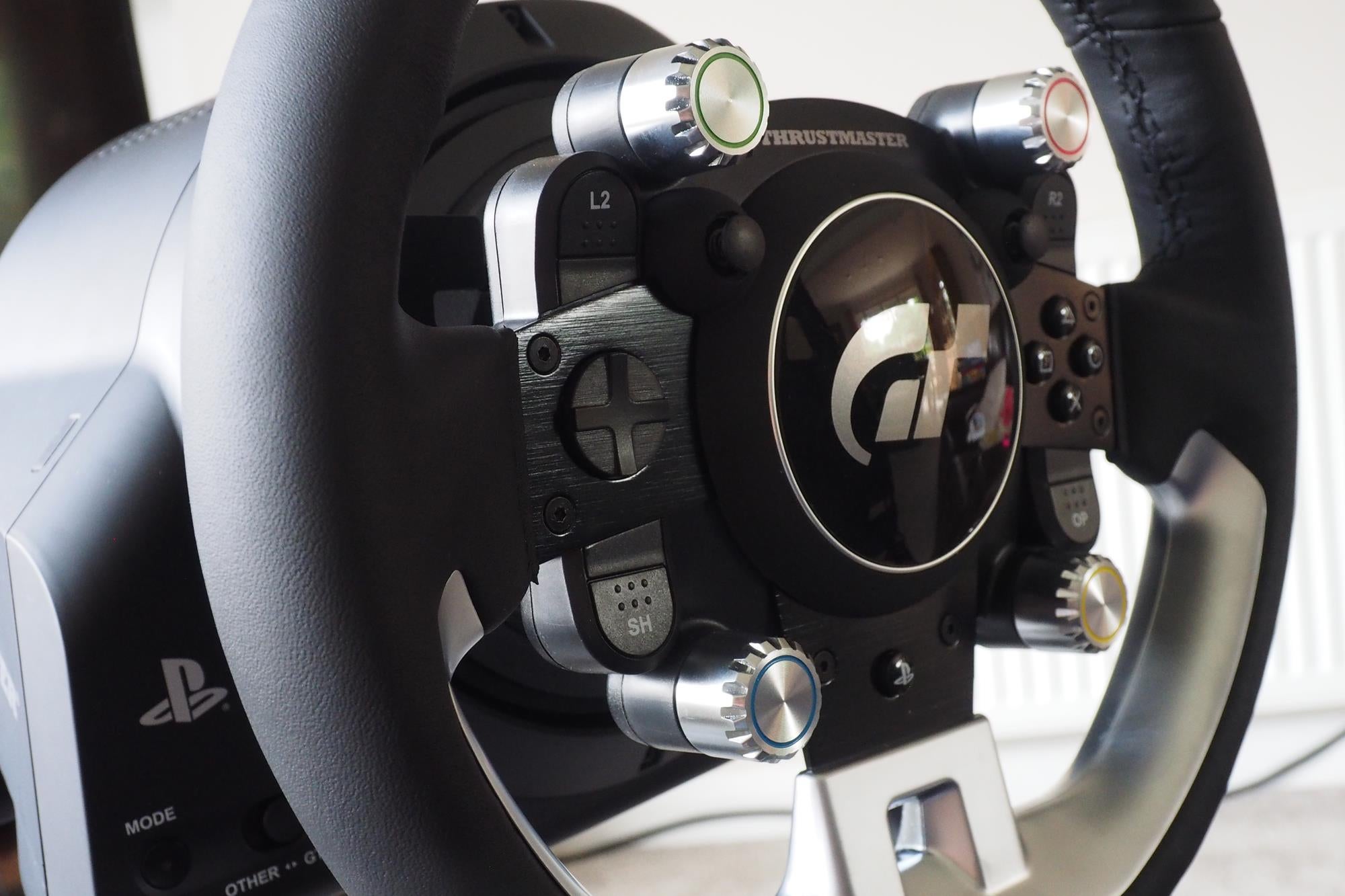 Why buy the Thrustmaster T-GT?

This really is the best racing wheel for Gran Turismo Sport. The extra force feedback adds depth to the game, and the wheel and pedals are also top-notch both in terms of build and performance.

However, if you’re likely to play other racing games as often as, or more than, GT Sport then you’ll get better value from the Thrustmaster T300 RS GT Edition or the Logitech G29. And if you don’t need a gear stick and clutch at all, the standard Thrustmaster T300 RS is still a great buy.