The last word in flight-sim joysticks, if you can deal with the price.

What is the Thrustmaster Warthog Joystick?

The Warthog is a HOTAS (Hands on Throttle and Stick) controller for PC. This means you get a joystick and a separate throttle to play with. They feature an astonishing amount of buttons and no expense has been spared on the build. If you are serious about flight simulators this could be the set up for you. 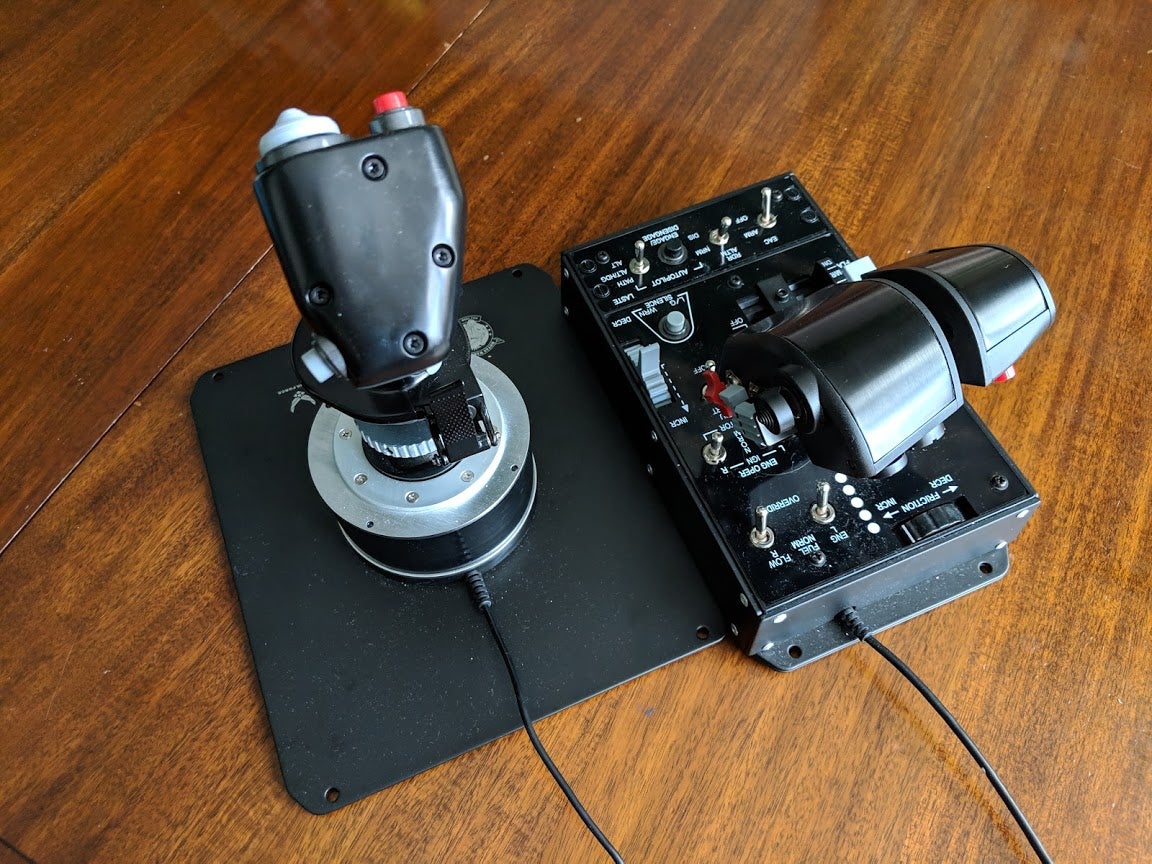 The Warthog joystick is mounted on a metal plate, which can be removed if you want. The plate has holes to allow it to be screwed onto things. 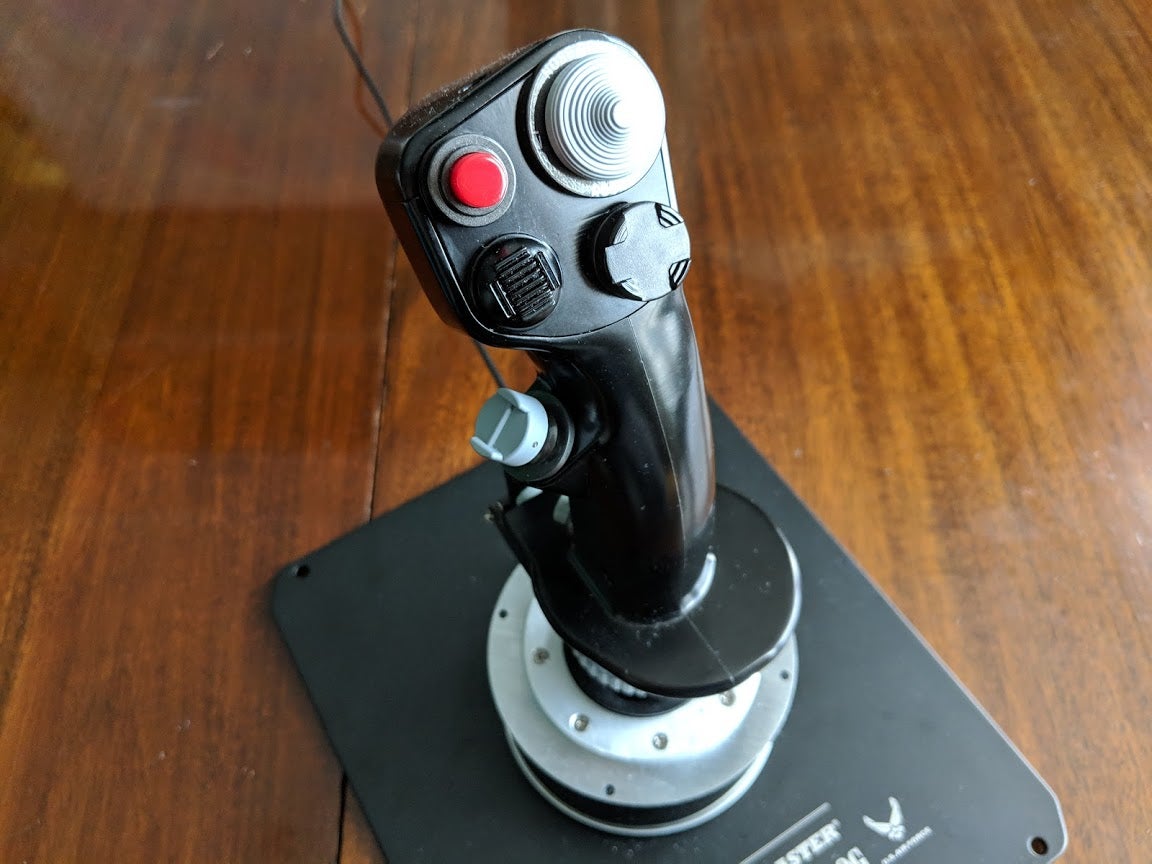 All the buttons feel extremely sturdy and each hat switch has a different texture on the top to help you select the right one without looking at your hand. Extremely useful when in VR or concentrating on something else. 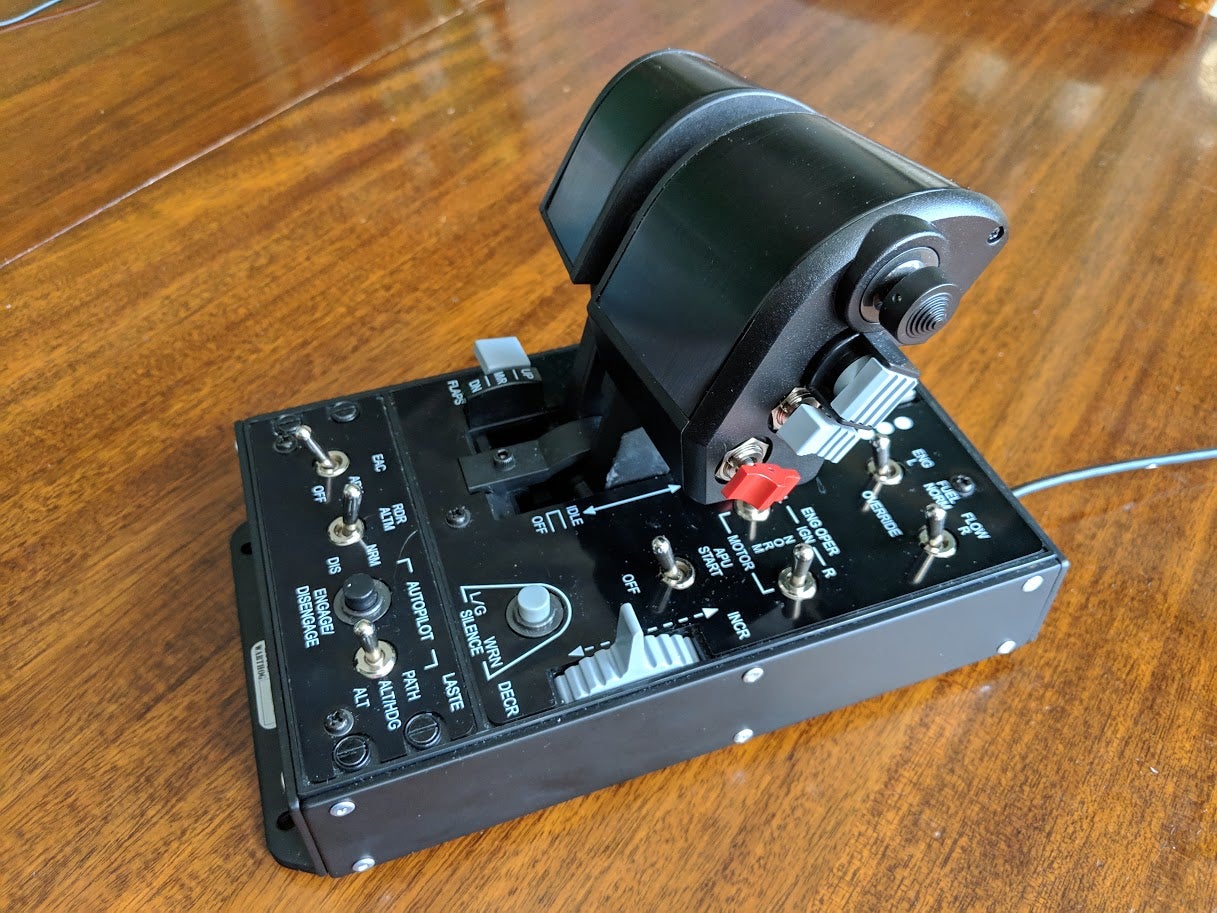 The throttle unit is mounted on a sturdy base, which also has holes for attaching it to things. The throttle itself is divided up into two parts. Which can be used for controlling things like thrust in left or right engines or locked together if you aren’t doing anything that complex.

The throttle only has one button on it, but has two eight-way hat switches, a clickable track ball masquerading as a hat switch (useful for doing mouse style stuff without moving your hands) and three additional switches.

One of the switches clicks forward and backwards. The other has three positions and the third is mechanically lockable in one of three positions. As a little bonus there is even a flip switch on the far left of the throttle with three possible positions. Each switch feels significantly different, which again aids bashing the right one in the heat of the moment. 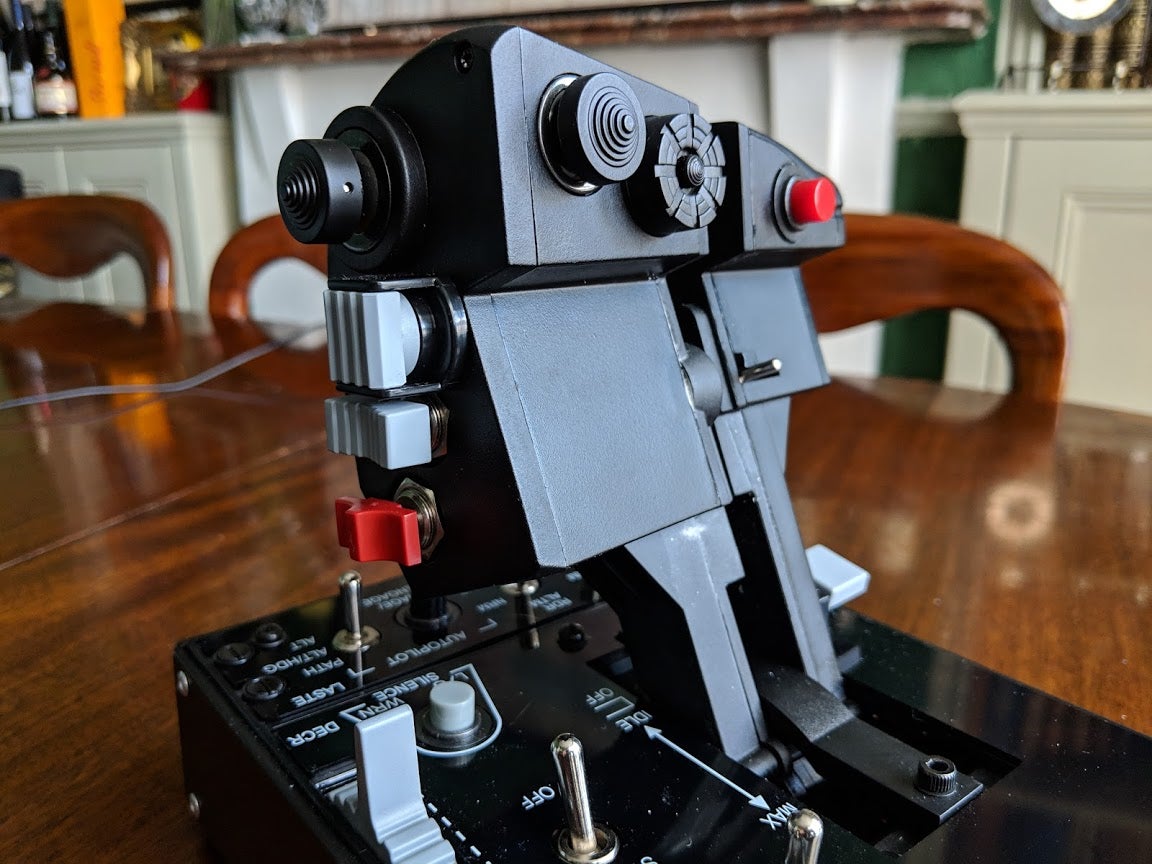 The fun doesn’t stop there. On the base of the throttle are eight flip switches. Five of them only have two positions, the remaining three have three possible positions, and to make things even more complicated, two of those are able to click briefly forward or hold in position if you push them back. So you can briefly activate something or lock it on, or anything else if you want. Everything is entirely programmable.

Finally there are two push buttons, a three-way switch labelled for flaps and a rotatable dial. There is also a dial for adjusting the resistance on the throttle. The throttle body has LEDs on it, which of course can be programmed. Of course. 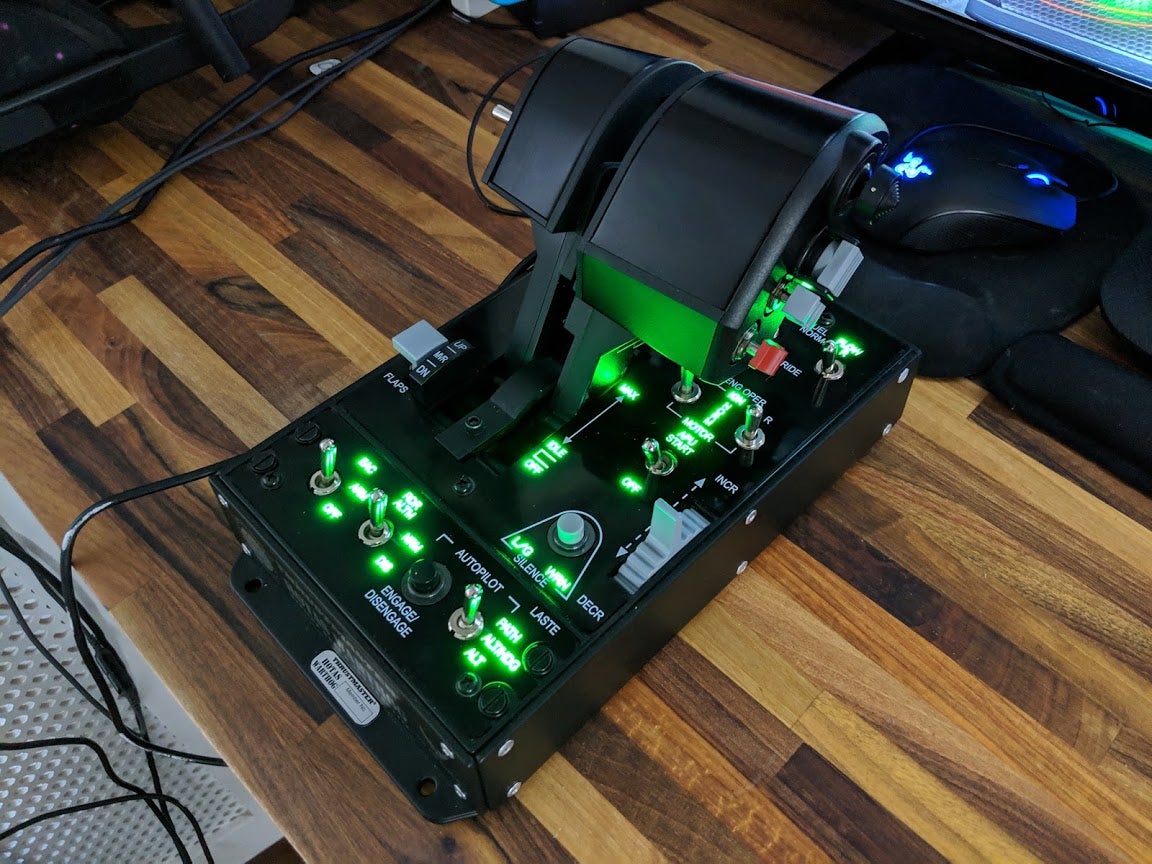 This all sounds incredibly complicated but you’ll learn where everything is remarkably quickly.

What this means is that for even the most complicated games you are probably able to have a dedicated switch for what you want. I tested it most with Elite Dangerous and I was able to do absolutely everything in the game without touching a keyboard.

Thanks to the programmable T.A.R.G.E.T. software, if a game is out there someone has already spent hours working out a good control method for it. Or you can make your own. I like to put the more vital functions on the buttons under fingers and leave the base unit for controls that I shouldn’t need in an emergency. 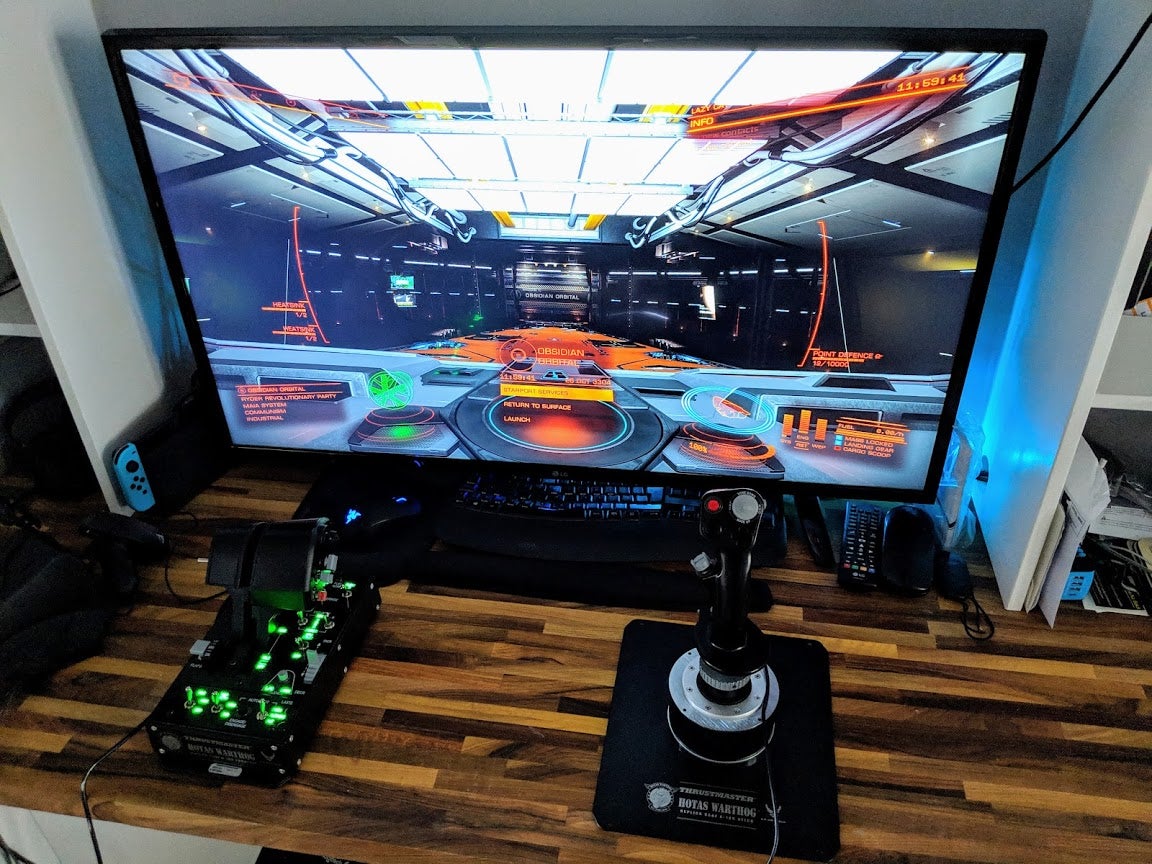 Elite with this joystick set-up is glorious; once you learn the controls you’ll be firing off weapons, adjusting sensor ranges and deploying landing gear like a pro, and it all feels a bit more ‘real’ because the joystick is made out of clunky metal and everything clicks as you use it. Just selecting targets and engaging the engines becomes a really enjoyable experience.

It also works really well in VR. You should be able to do everything without taking your hands off the controls or removing the headset. Occasionally it’s possible to flip the wrong switch in the middle of a fight, but that’s more user error that a design problem. A bit more practice will solve that.

The build quality is incredible. The unit is all metal, and the pedals are machined from single blocks of aluminium.

You have to do a little bit of set-up when they arrive, attaching the pedals and setting them up. The angle of the pedals can be set but the range of off settings isn’t vast. The level of resistance to push them can be adjusted – it’s controlled by a mixture of springs and pistons.

The pedals let you control Yaw, and also have a forward action. So you get three more axes of movement in total – twisting left and right, and then each pedal can tilt individually.

The unit is weighty so you’ll have no issues with it sliding about as you use it, and like everything else ,there are mounting points if you want to attach it to something.

In combination with the Warthog joystick and throttle it’s brilliant, and with a half-decent VR set up there are moments where you can convince yourself it’s almost the real thing.

The downside with the pedals is that they cost as much as the rest of the joystick and throttle. It’s a bit easier to justify the joystick with its scores of buttons but harder to do with the more mechanically simple pedals. It’s disappointing, but like the joystick if you can afford it, they are great pedals and are built to last for ages.

Should you buy the Thrustmaster Warthog Joystick and Throttle?

The cost is the only issue with this joystick and throttle set-up. Everything else about them is best-in-class by miles.

If the price is something you can manage, and you love flight simulators or any sort of game where you fly or drive something, you should buy these. They really are that good.

Apart from the cost the only thing I can say against them is they have got me thinking about building a proper chair to mount them on, with rumble packs and some sort of VR set-up. You have been warned. It might get expensive.

However, if your budget doesn’t stretch to dropping this much on a peripheral, the T16000m or X52 Pro are good options for around £100. The reduced cost means a drop in build-quality and far fewer buttons but still enough to keep you busy. If you just want try something less complex, the T-Flight is incredible value at £50.

If money isn’t an issue, this is the set-up to get. Or to put it another way, the moment the review joysticks go back to Thrustmaster I’ll be buying a set. I just won’t eat food for a few months.