Available on PS3, PS Vita, PC, Mac, iPad (reviewed)
If you haven’t heard of Thomas Was Alone yet and you call yourself a gamer, shame on you. It’s a great puzzle-platformer that features a cast of blocks in assorted shapes and sizes that you’ll need to get to know to reach the portals at the end of each level.

The original game was released in 2012 to critical acclaim for the PC and Mac and has since been given a PS3 and PS Vita port. Now the game arrives on iPad and it is a great excuse to get in on the Thomas Was Alone action if you’ve missed out thus far.

One of the game’s key features is its minimalistic appearance, and this iPad port lovingly reproduces it for touchscreen with great affect. It has taken two years for Creator Mike Bithell and co to get Thomas Was Alone on the iPad and they have obviously worked hard on the port. 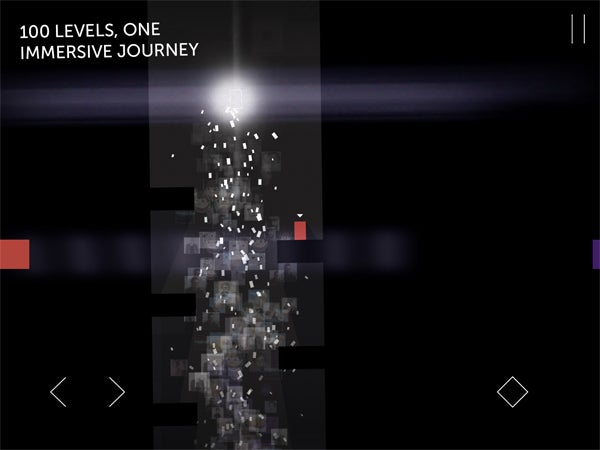 The game looks stunning on the iPad and that’s partly down to the original graphics, but also the attention to detail with the on-screen information.

The on-screen controls are as minimalistic as the game itself, with two directional arrows on the right and a diamond shaped jump button the left. This simple control layout is the only thing on screen as you play initially, aside from voiceover captions attached to the character you’re currently controlling.

These captions are dynamic, as with Thomas Was Alone for other platforms, changing length depending on where your character is on-screen, helping the game’s presentation feel slick and refined despite its blocky nature.

If you haven’t played Thomas Was Alone before, the game starts off with the eponymous Thomas, an enthusiastic small red rectangle that is one of many shapes in a computer mainframe, who has suddenly realised it is capable of intellectual thought. 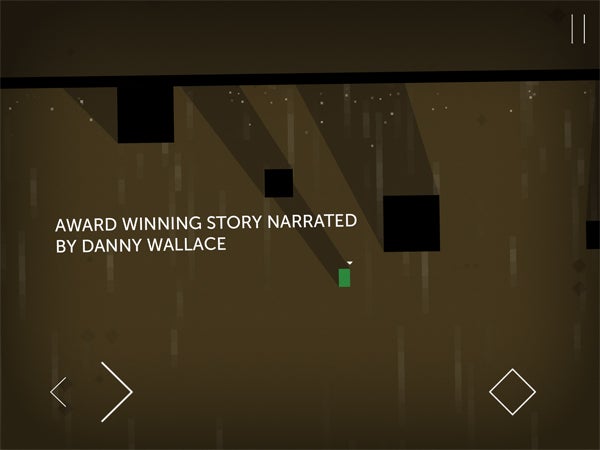 You’ll need to guide Thomas through each level, pushing him through white portals shaped and sized just like himself. As you progress you’ll meet other characters that you’ll need to direct to their own level goals, which aren’t necessarily in the same section, solving the navigational puzzles along the way.

For a small window to the kinds of characters you’ll meet, there’s Chris, a small cantankerous little orange square who is constantly moaning and not a great jumper. If he’s not to your liking, there’s also John, who is a long, tall yellow rectangle capable of reaching lofty heights with one jump, much to Chris’ annoyance.

Throughout the game you’ll be introduced to an assortment of little shapes all with their own name, personality and distinct skills.

As you gain more characters in each level, the iPad version presents correspondingly coloured swatches at either side of the screen. You’ll be able to switch between characters by tapping these coloured tabs. 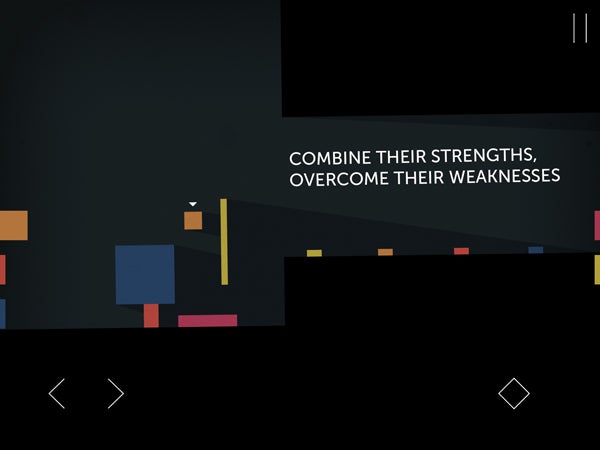 Now either we have oversized thumbs or the Thomas Was Alone team has made these coloured tabs a little on the small side. Often we’d have to tap them a couple of times to change character because the iPad registered that we were pressing multiple tabs simultaneously.

Once you’ve been playing for a while though, you get used to where to press them and controlling your shape army becomes far easier.

Having played Thomas Was Alone on the Mac and PS Vita, we were surprised how responsive the touchscreen controls were with the iPad version. There was a danger that the on-screen controls would make it impossible to navigate the characters through levels, which often requires some placement precision, especially on staircase sections.

The team at Bossa Studios, responsible for the iPad port, have done a great job with the touchscreen controls, so you won’t find yourself wanting to fling your iPad across the room after you repeatedly over jump and plunge your character into the deadly water. 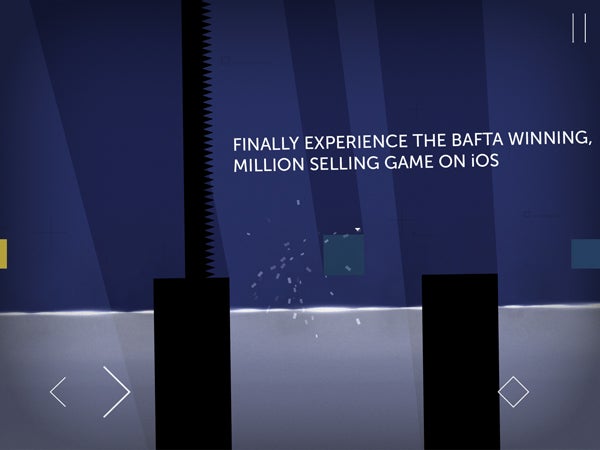 Part of the game’s charm comes from the narrator, Danny Wallace of XFM, Yes Man and Assassin’s Creed fame, who portrays the characters personalities in such a way you’ll constantly be smirking at your iPad screen.

Wallace’s voice as well as the awesome soundtrack from David Housden come across well even when played directly through your iPad’s speakers. However, we advise donning some headphones for this game, as advised by the game’s opening credits, because it’s the only way to get the full, immersive Thomas Was Alone experience.

What might put you off a little is the £5.99 App Store pricing, but this matches the cost of the game for all other platforms. Despite the new touchscreen platform, you’re still getting exactly the same game and if you’ve not played it before the £5.99 price tag shouldn’t put you off.

It’s taken over two years for Thomas Was Alone to make it to the iPad, but it was totally worth the wait. As with all other versions of the game, Thomas Was Alone on the iPad is quite brilliant and the love and attention that went into the original has been very well represented in the tablet version. The cast still brims with charm and the intriguing storyline combined with increasingly complex puzzles will keep you playing until the end without a doubt.

Next, read our Child of Light review