What is the Thinkware X350?

The X350 is a new mid-range dashcam from Thinkware. Of the two main design styles Thinkware tends to use, the X350 is the more traditional one with a built-in LCD like the X550 rather than the screenless version like the F800 Pro. So it looks a bit like a compact camera. It also only offers Full HD recording rather than the higher resolutions now on offer from some manufacturers. With a price well beyond the sub-£100 level some dashcams can now be purchased for, is the Thinkware X350 worth the extra money?

The Thinkware X350 only offers Full HD video resolution, but it does at least capture this with a premium 2.12Mpixel Sony Exmor CMOS, which has a good reputation for image quality and low light performance. Thinkware appears to be focusing more on component quality rather than raw resolution with this model. 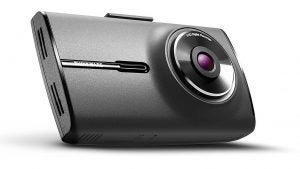 The Full HD video is recorded at 30 frames and 11Mbits per second, including audio, which is a slightly aggressive compression ratio for Full HD. There aren’t any other resolution, quality, or frame rate options. At this one setting, video can be recorded for around 97 minutes on an 8GB MicroSD card before looping occurs.

Thinkware has chosen to supply many of its dashcams with adhesive mounts rather than suction cups, and the X350 is included in that group. This will make transferring it between vehicles harder, although there is a second patch of 3M double-sided adhesive included in the box. On the plus side, the 3M tape mount is highly unlikely to detach from your windscreen at any point. 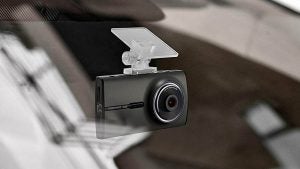 The usual lengthy power cable is included and, also as per normal with most dashcams, this ends in a captive car cigarette lighter adapter. This will mean you can’t plug anything into the socket at the same time, or use a car USB connection to provide power.

But Thinkware shows good attention to detail by including a pack of five clips with 3M adhesive in the box. Not many dashcam manufacturers include these, and they’re essential for routing your cabling neatly around your windscreen.

Since the X350 has a 2.7in screen on the rear, you can change settings on the device itself, unlike Thinkware’s F-series devices, which require a smartphone app. There are four buttons on the left of the screen that change function depending on context. Generally, the top one takes you back a level in the menu, the two middle ones navigate up and down, and the bottom one selects the current option. 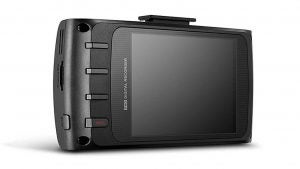 There aren’t that many options to choose from, however. You can vary the sensitivity of the G-sensor between five levels, and there are three brightness levels for the recording. There’s a parking mode that can be enabled, with parking and motion sensitivity options, and a timer to turn off the device after a fixed period. You can also set this to turn off when the voltage drops below a certain level, to avoid a flat battery.

Other than the aforementioned parking mode, there aren’t any further dashcam features. There’s no collision detection, lane departure warning, or notification when the car in front starts moving in stationary traffic, although I’ve never been bowled over by these when they are available. There’s no GPS built into the X350 either, but it does have an external accessory option to add this feature. 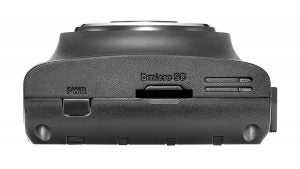 If you do add the GPS, you can then download a safety camera location database to the memory card. The X350 provides voice notification for various status messages. With the GPS and database, this would then also include safety camera warnings. I’ve tried this with other Thinkware dashcams and it’s a reasonably up-to-date system, including the recently added average speed zones around London. 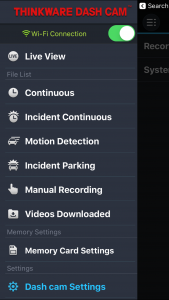 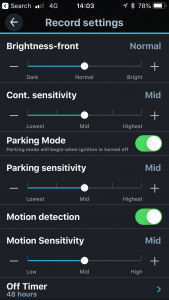 Like so many dashcams these days, the X350 has built-in Wi-Fi, which you connect to via your smartphone, after which you can load the Thinkware app. This is available for Android and iOS. It doesn’t offer any extra configuration options above what is already available on the device itself, but allows you to preview what the dashcam is seeing, as well as view recorded files and store them on your smartphone for upload to an online sharing service.

Thinkware also boasts about having a high-temperature protection system, which basically means the X350 has a thermal sensor and will turn itself off before overheating occurs. I’ve not had overheating issues with dashcams in the past, but it’s reassuring that the X350 won’t be susceptible to the hot UK weather we’ve been having in June and July, or future global warming.

The X350 has a wide 140-degree angle of view, although we’ve seen dashcams with wider. However, image quality is merely mediocre. The X350 reproduces colour faithfully and copes well with high contrast levels. However, the high compression is evident, reducing the detail. You’re going to have to move through footage on a frame-by-frame basis to find a clear shot of identifying text like a number plate in the case of an incident. 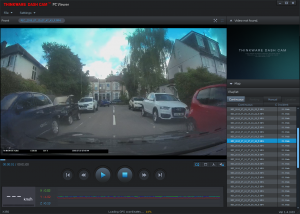 The Thinkware Dash Cam desktop software lets you view G-sensor information alongside your video. If you have the optional GPS, you can also view a map showing the location of your recordings that will update in real time as you play each clip. But as I didn’t have this, the area on the top right where this should have been remained empty.

Should I buy the Thinkware X350?

The Thinkware X350 has a solid physical design, but the image quality doesn’t quite achieve the same level. As a result, the £130 price is a little high when you can get similar quality for under £100, and for the same money a higher resolution is available, for example with the Garmin Dash Cam 55. In other words, there are better value and quality options elsewhere.

The Thinkware X350 is let down by mediocre image quality considering its mid-range price.