What is the Thinkware F800 Pro?

The F800 Pro is the latest flagship dash cam from Thinkware, replacing the slightly less well-endowed F770. Whilst manufacturers such as Nextbase with its 612GW are pushing the envelope for resolution, Thinkware is focusing on features instead. The F800 Pro is the first dash cam we’ve tested to promise cloud services.

The F800 Pro’s core specification is improved only subtly over the F770; it includes a more recent Sony Exmor R CMOS. This is slightly larger at 1/2.8 inches, but also with a marginally lower resolution at 2.13-megapixels. The latter is still more than enough for Full HD, however. The F800 Pro’s recording resolution is still limited to 1920 x 1080 at 30 frames per second, as was the case with the F770. 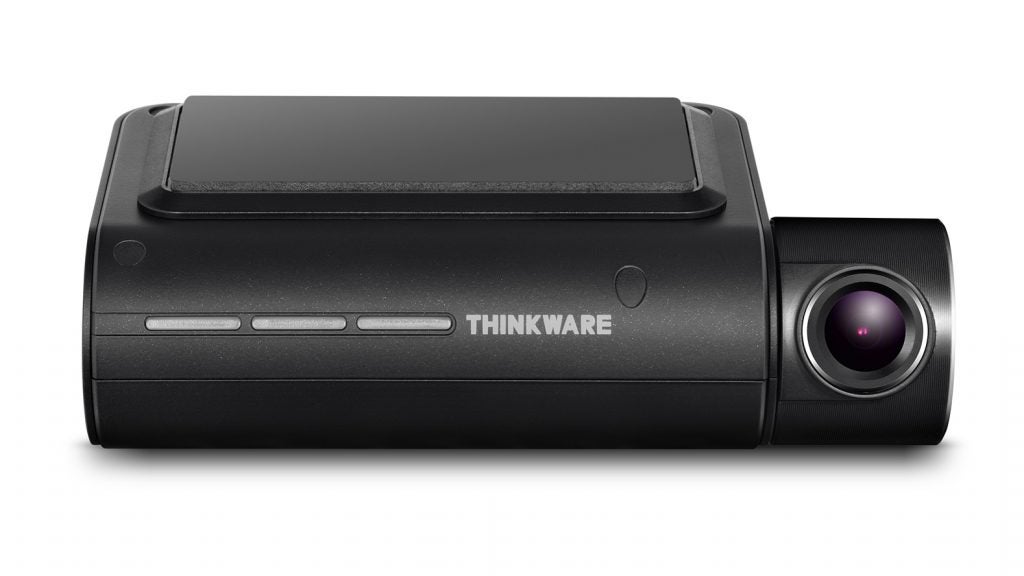 Video is captured at 10Mbits/sec, which is reasonable for Full HD, and there aren’t any other options. A 32GB microSD card is included for storage. This will be sufficient for over 400 minutes of footage before looping begins to erase older files. This is plenty for most journeys, even though you only get 200 minutes of recording time – the rear camera simultaneously uses the same data rate. There’s no facility to take photos, however.

The F800 Pro follows a similar format to the F770, although in this case the camera protrudes from the end of the device rather than being inside the main body. Unusually amongst dash cams, the F800 Pro (like the F770) doesn’t have a built-in screen, forcing you to use the built-in Wi-Fi and smartphone app for any configuration, of which more shortly.

This model isn’t designed to be taken in and out of your car regularly. An adhesive plate attaches to the top of your windscreen, into which the F800 Pro slides. A permanent connection kit is available, so you can route the power cabling to an internal connection, or there’s a version with a cigarette lighter adapter instead. The latter is permanently attached to its cable, however, so can’t be used at the same time as a device such as a satnav that also plugs into the cigarette lighter. 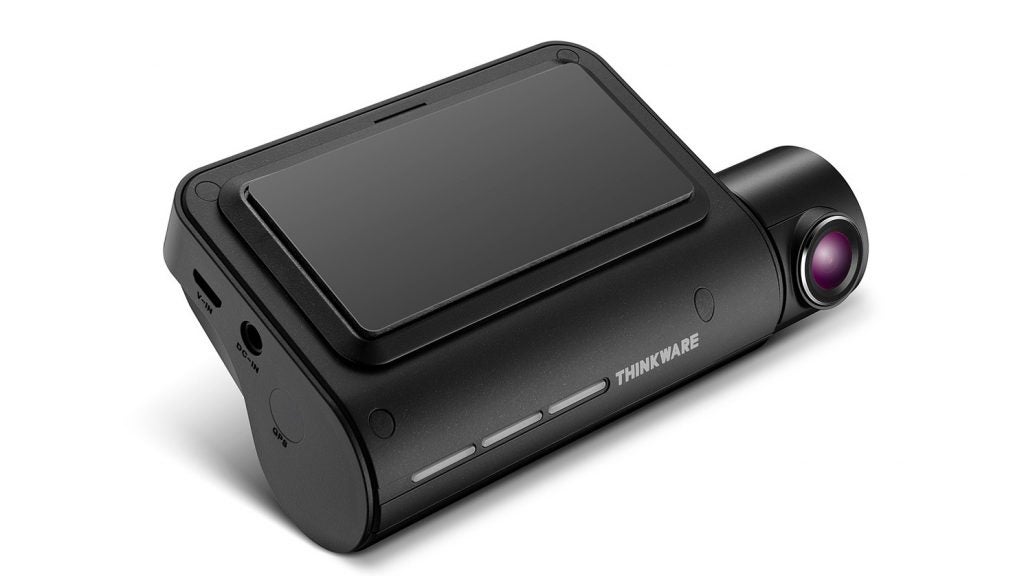 Once the F800 Pro is installed, you can tilt the camera up and down so that it points in the right direction. You can’t rotate left and right, however, making it essential to position the adhesive plate accurately first time.

Since the F800 Pro doesn’t have a screen, most functions require the use of the smartphone app. There are some buttons on what becomes the underside of the device facing the driver once it’s installed. One is for power, another toggles the microphone, a third button formats the memory card, and the fourth one turns the Wi-Fi off and on. These range round a fifth button that triggers manual video recording. 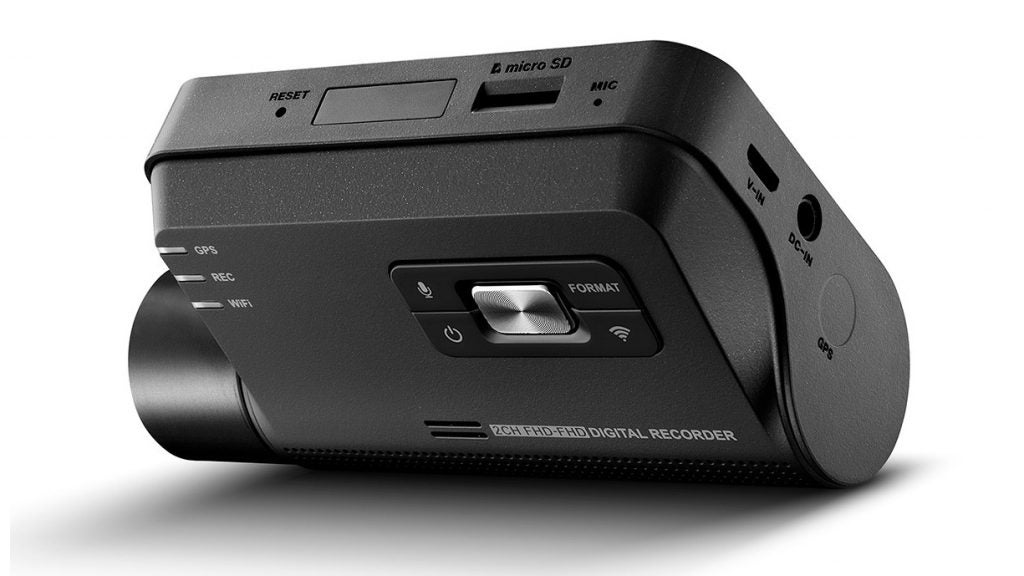 Once the F800 Pro is powered up, it verbally announces that it has a Wi-Fi connection ready and invites you to connect your smartphone, then fire up the Thinkware Cloud app. This provides configuration options, including choosing brightness from three different settings for both front and rear cameras, as well as rotating the orientation of the rear camera.

The Live view helps you orientate the cameras correctly. There’s also a host of advanced safety features available via the smartphone app. But before going into these, let’s take a closer look at the rear-view camera. 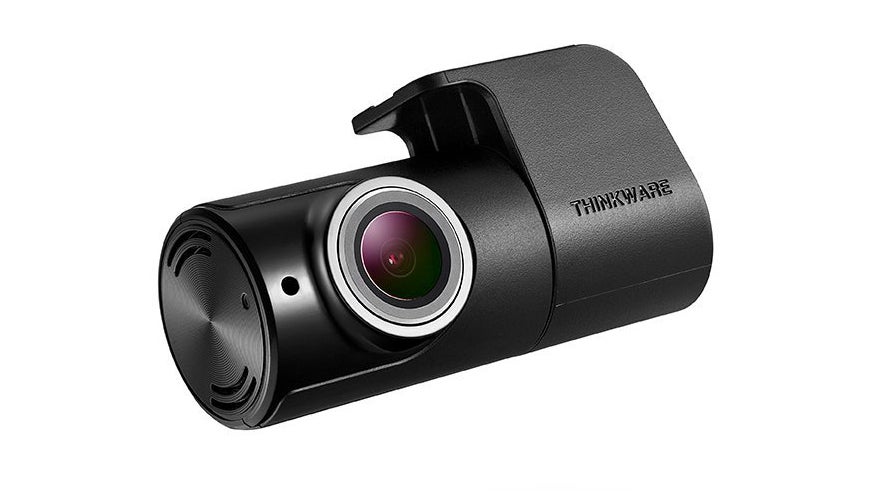 The rear-view camera comes with a super-long cable and also attaches with an adhesive pad, as does the F800 Pro. You install this up at the top of your car’s rear window. However, I’ve found that the angle and curvature of hatchback rear windows can cause considerable reflection with rear cameras, depending on the vehicle.

The F800 Pro includes a comprehensive set of advanced safety features, starting with GPS to track location alongside video recording and G sensor to protect recordings when an impact is detected. There’s a parking mode, which can detect both impact and motion. Since this effectively leaves the camera on continually, it also includes the option to enable battery protection, which will turn off the camera once the battery power drops below a certain level. The F800 Pro can warn you of safety camera locations, including mobile zones, and you use the smartphone app to install these. The remaining functions are grouped under the heading Advanced Driving Assistance System (ADAS). These include a Lane Departure Warning, for which you can set a minimum speed before it kicks in, to avoid false positives when driving locally.

There’s a Forward Collision Warning System, to let you know if you’re approaching the car in front too quickly; this has a low-speed option too. The Front Vehicle Departure Warning provides notification when the car in front starts moving in a traffic queue, in case you stopped paying attention. 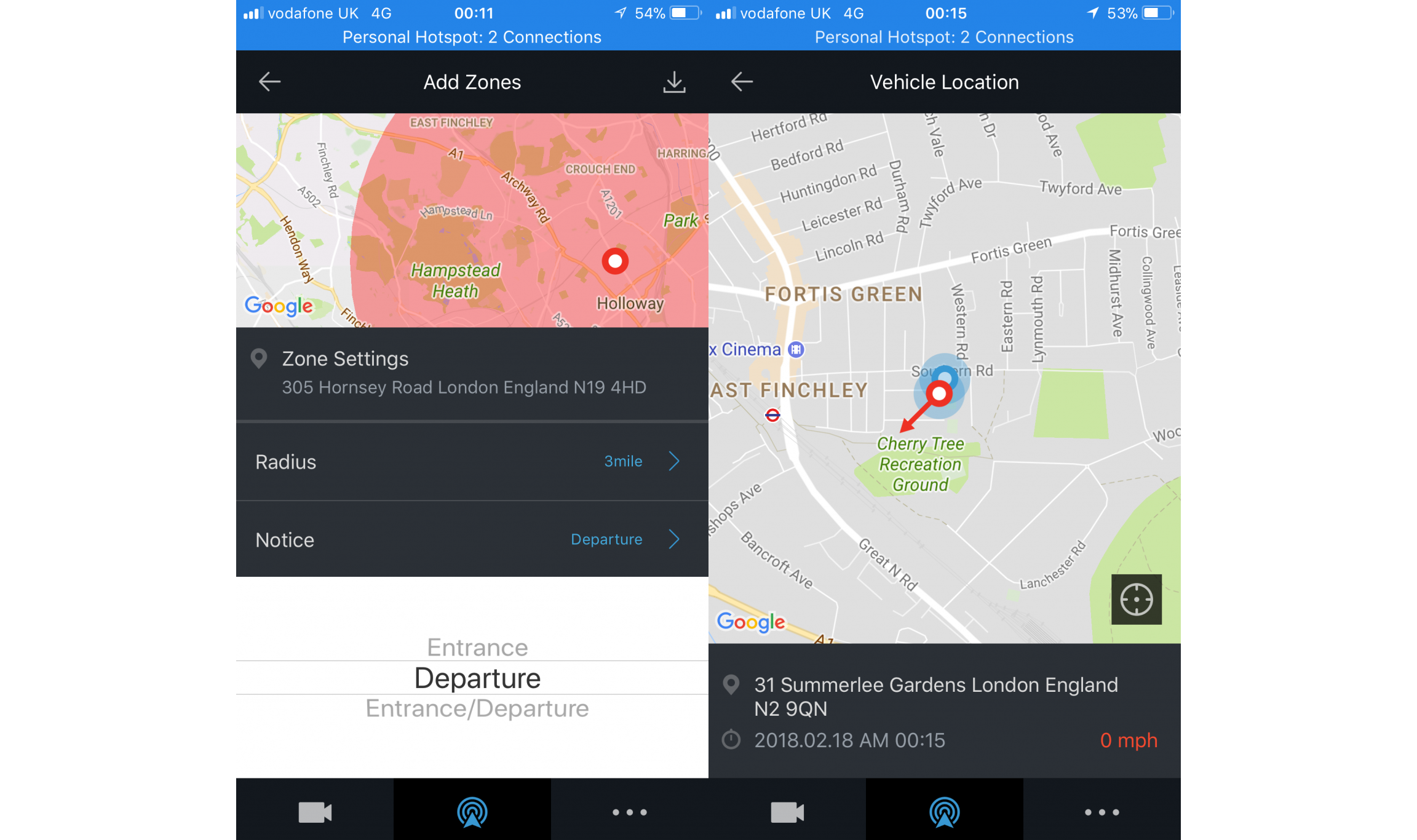 The most unique capabilities of the F800 Pro come from its cloud services, however. These include the ability to geofence an area, so you can be notified when your car containing the F800 Pro leaves this area. It can also provide notification when an impact occurs to your vehicle, as well as the ability to locate your vehicle when parked.

These are potentially very useful features. However, I’m not sure how they’ll work when your smartphone isn’t within Wi-Fi range. This is used as a hotspot to provide the necessary internet connectivity; the F800 Pro doesn’t have its own mobile data facility built in. Setup is also a little complicated, and I found I had to consult a couple of Thinkware’s tutorial videos online before I got the cloud services working.

The Thinkware F800 Pro can’t compete for sheer detail against the 4K-enabled Nextbase 612GW, but with compression that isn’t too aggressive, video quality is still very good. There’s enough detail to read identifying text such as number plates, and the F800 Pro copes well with high contrast, which is one of the features Thinkware claims in its marketing materials.

This may only be a Full HD dash cam, then, but its image performance is more than adequate for it intended purpose. In theory, the rear camera provides the same quality as the front one – but, as already mentioned, it really depends on how much reflection is caused by your rear glass. My test car’s curvy back window caused quite a bit of distortion.

You can watch a sample of footage shot with the Thinkware F800 PRO’s front camera below.

You can watch a sample of footage shot with the Thinkware F800 PRO’s rear camera below.

Why buy the Thinkware F800 Pro?

The Thinkware F800 Pro is an expensive dash cam, offering only Full HD resolution. However, it’s absolutely crammed full of advanced features, and the cloud services are unique. We’re not sure how useful the latter are in their current form, but they have potential. Even if you don’t use them, there’s plenty else here to make the F800 Pro worth considering, despite the high price.

The Thinkware F800 Pro is pricey but packed with dash cam features.