What is the Thinkware F100?

The F100 is an entry-level dash cam from Thinkware. My experience with Thinkware so far has been at the higher-end, with models such as the F800 Pro. The F100 costs £109, and £149 with the optional rear-view camera. Even so, it records Full HD, and you can add GPS as well to capture your location alongside video footage.

Thinkware reveals that the F100’s CMOS has 2.12-megapixels and is made by Sony. But this is enough for the Full HD resolution that is this dash cam’s top mode – and, indeed, its only mode. Footage is recorded in MP4 format at 30fps and 10Mbits/sec, which is a little low for Full HD.

On Amazon, the F100 bundle with rear-view camera also includes a 16GB microSD card. This capacity will be sufficient for 3hrs 33mins of footage from the main camera, although if you have the rear-view camera as well then this duration will be reduced.

Like the F800 Pro, the F100 doesn’t have a screen, so it will take a combination of guesswork and trial and error to ensure it’s pointing in the right direction.

Thinkware only provides a mount with a 3M adhesive patch in the box, although a second replacement patch is included. There’s no suction cup included, since this isn’t a dash cam that you’re meant to take in and out of your vehicle. 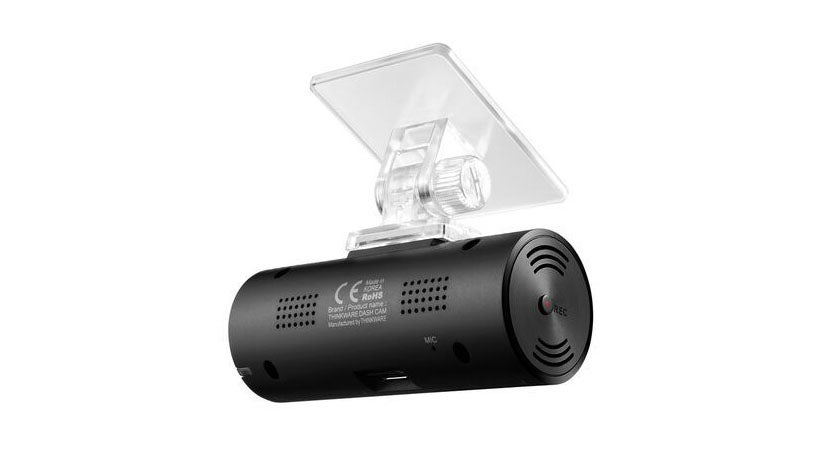 In fact, if you also have the rear-view camera and GPS options (see below), you’ll have three cables to unhook; it really isn’t practical. Note, however, that the F100 is rather small and discrete, making it less likely to be noticed when installed in your car.

There’s a welcome attention to detail with the bundled mounting kit, which also includes three 3M adhesive clips to help you route the cables neatly around your car windscreen.

With the usual lengthy car power adapter cable supplied, these clips are very handy and something most dash cam manufacturers don’t bother to include. But the adapter itself is permanently attached to its cable, which will be an issue if you want to use your car’s cigarette lighter power plug for a satnav or lighting a cigarette, for example.

This is going to be a rather short section of the review, because the F100 has only a single button and no menu. There’s no Wi-Fi either, so you don’t even have the option to use a smartphone to preview video while adjusting the direction of the camera during installation. 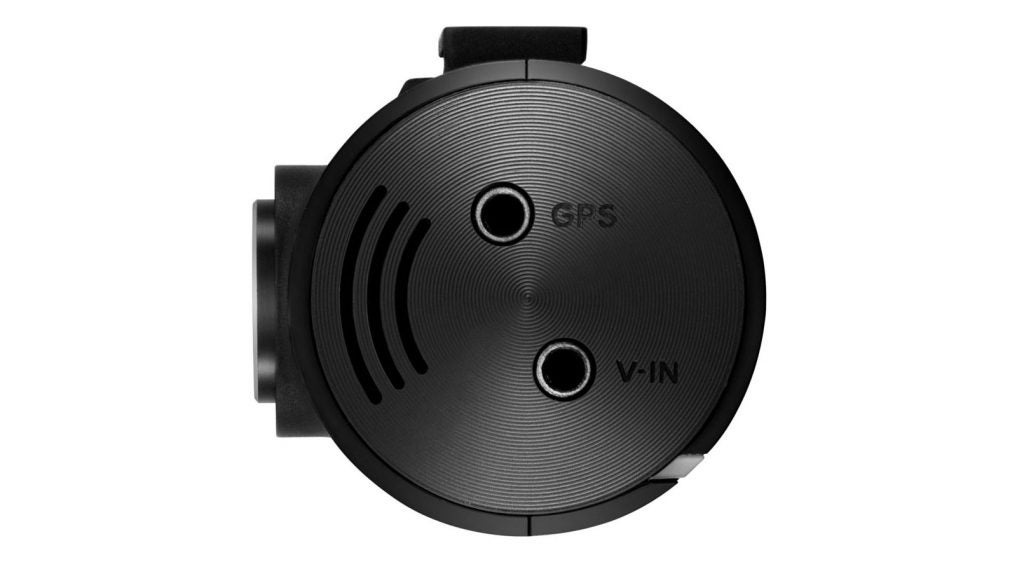 This also means that there are no settings or alternative shooting modes. You just plug in the F100; when the car is on and the cable is supplying power, it will record. When you turn off the car, the F100 will stop recording, although you can use the button on the end to start and stop recording manually if needed. And that’s it.

As we’ve hinted already, there are some upgrade options available for the F100. These include a rear-view camera and external GPS unit, which plug into separate mini-jacks on the end of the cylindrical main unit. 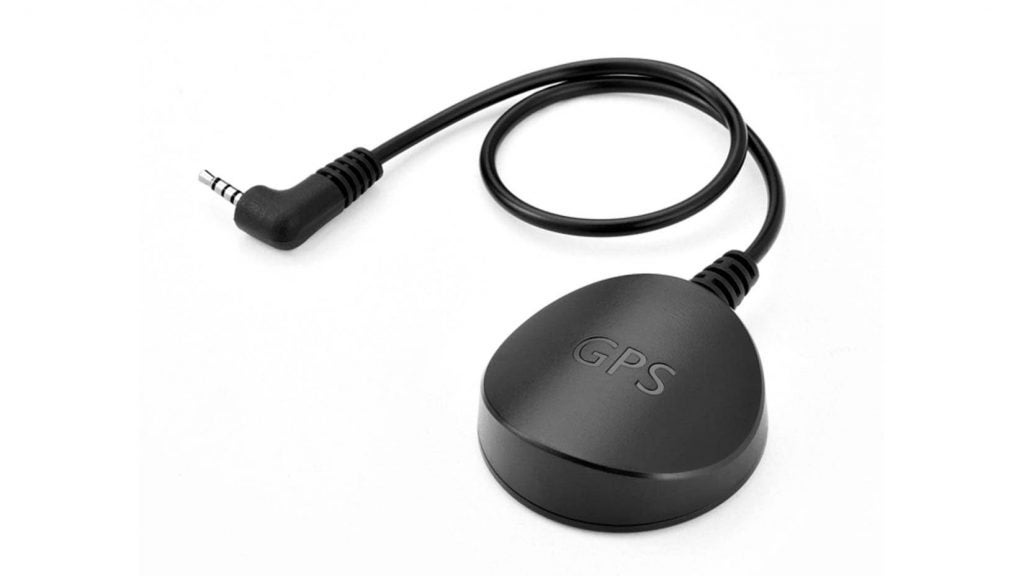 The GPS unit costs around £30 and comes with a small cable, so you’ll need to attach it on the windscreen close to the main F100 unit. This is supplied with 3M adhesive tape like the dash cam, so it can be stuck directly to the glass.

Once installed, the GPS works with a ready-installed database of safety camera locations to warn you when you’re approaching speed traps. I found this included the average speed zone on the North Circular, which was installed a year or so ago, showing the database is quite current. 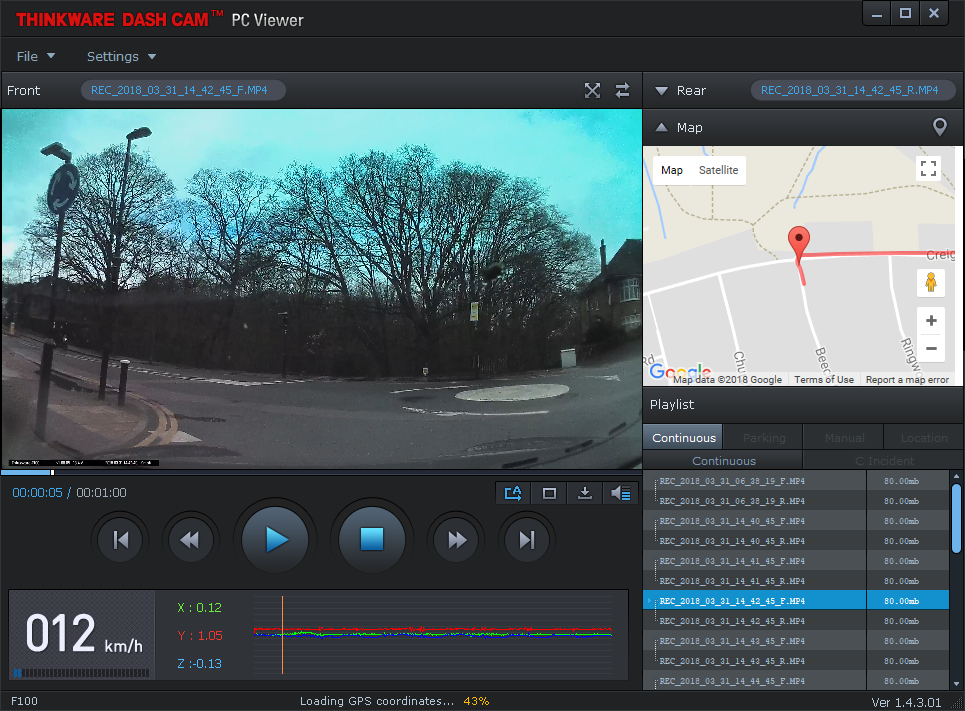 The GPS also records your location alongside video. There’s software for Windows and Mac included on the device itself, which auto-updates to the latest version once installed. When you view footage with this software, it shows the position on Google Maps as the video plays.

The rear-view camera looks identical to the one included with the F800 Pro and for the F770, but none of these are compatible. This version only records at 720p resolution rather than 1080p, so won’t deliver the same quality. It adds £40 to the bundle price, and costs £60 on its own. 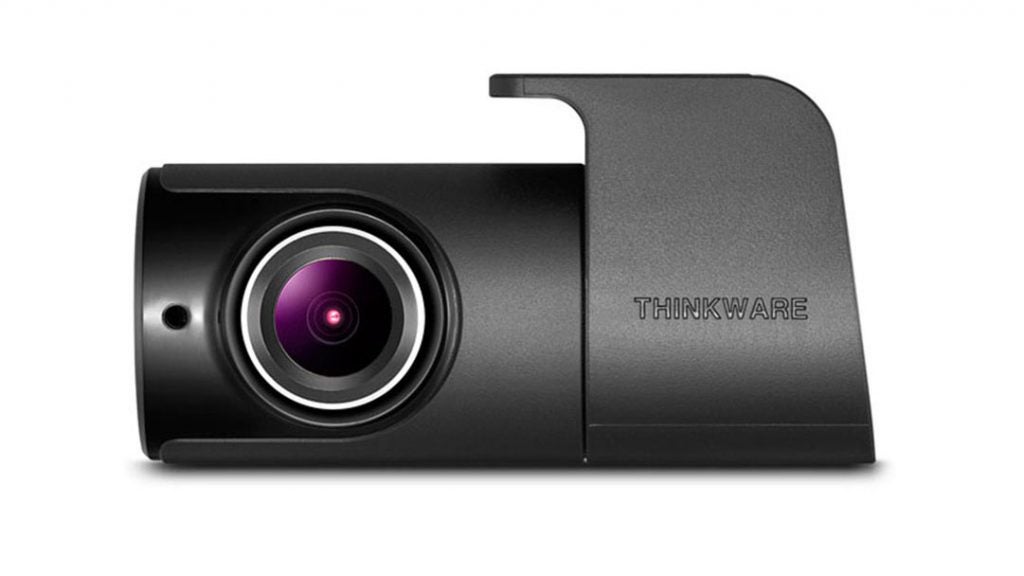 The rear-view camera captures video at 6.7Mbits/sec, so with this running alongside the front camera, the 16GB microSD card bundled will last 2hrs 7mins before looping occurs.

There’s also a version of the rear-view camera that has infrared LEDs for recording in complete darkness. This adds £50 to the bundle price, and there’s also a weatherproof external version for an extra £100. I wasn’t supplied with either, however.

The F100 doesn’t have the data rate of the higher-end F800 Pro, and this is evident in the quality of the footage. There are clear signs of compression artefacts, which makes the text on road signs and number plates hard to read unless viewed up-close and when relatively stationary. Colour and contrast are acceptable, however.

The 720p rear footage suffers even more greatly from compression softness – and, as usual with rear cameras, is also quite dependent on the configuration of the rear window on your car. My car’s rear window is quite bulbous, so the image is very distorted at the edges. But a saloon car with a flatter rear window would have fewer problems.

You can watch a sample of footage shot with the Thinkware F100’s front camera here.

You can watch a sample of footage shot with the Thinkware F100’s rear camera here.

Why buy the Thinkware F100?

If you add the GPS and rear-view camera, the Thinkware F100 is quite a comprehensive package, despite the lack of an LCD screen. However, the image quality isn’t great. There are cheaper options with equal or better performance, such as the Aukey DR-01. However, few alternatives have the ability to add a GPS or rear-view camera, so the F100 does have a few useful tricks up its sleeve.

The Thinkware F100 benefits from optional GPS and rear-view camera add-ons, but image quality is mediocre.