The idea of having a universal remote like the RedEye Mini on your iPad/iPhone/iPod touch seems to make perfect sense. After all, long – and frequently frustrating – experience suggests that the best universal remotes are those that feature some sort of screen display to help you keep track of what you’re trying to achieve on which device. And models with touchscreens take the vital sense of control immediacy to a whole new level.

Add to this the RedEye Mini’s support for gesture-based controls on its iPod/iPad/iPhone home, as well as the extra-large screen area available on an iPad, and you really could be talking about the universal remote to end all universal remotes.

This potential becomes all the more exciting when you consider that at £44.99, the RedEye Mini costs peanuts relative to typical touchscreen universal remote controls. (Assuming you already have a suitable iDevice, obviously!)

Android fans will doubtless be feeling pretty cheesed off around now by the RedEye’s current iOS exclusivity – if they’re even still reading the article at all. Hopefully they are, though, for ThinkFlood, the people behind the RedEye Mini, promises that an Android-capable system is ‘coming soon’. 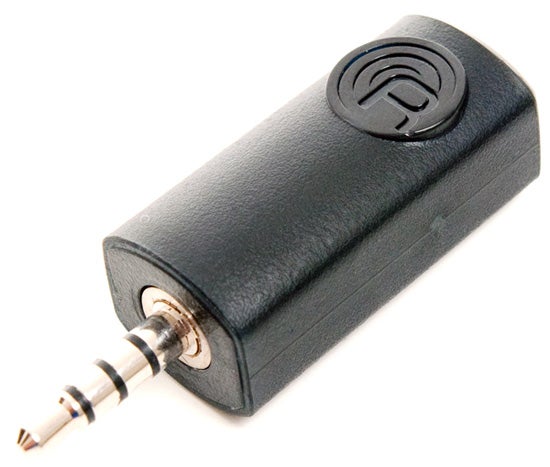 As its name suggests, the RedEye Mini doesn’t physically consist of very much. Its little box contains just a RedEye IR ‘dongle’, and a reasonably handy little holder for the dongle that’s attached to a key ring.

The dongle is around an inch long and a cm or so wide, with a 360-degree IR transmitter on one end and a plug for pushing into your iDevice’s headphone slot on the other. The necessary free app for driving the dongle has to be downloaded from iTunes.

With an infrared transmission range of between 20kHz and 60kHz, practically all home entertainment devices should be controllable via the RedEye Mini, a fact which seems backed up by the gargantuan list of manufacturers you get when you start adding a new device to the RedEye’s system.

The RedEye also supports infrared ‘learning’ – a key feature for any universal remote – and it appears that the amount of devices, control functions and ‘activity’ macro lists you can program is restricted only by the available memory in your iDevice.

The claimed active range for the RedEye Mini IR dongle is 30 feet, while the software provides the facility to program different rooms into your iDevice (for more streamlined and advanced control systems).

A further nice touch is that you can set your RedEye Mini application up to download TV guide information for any broadcaster you like, be it Freeview, Freesat or Sky. You can then call this guide up at the touch of a virtual button and access the usual programme information just as you would via a digital TV’s Electronic Programme Guide. Plus, of course, you can hit the Watch Now button once you’ve selected a program and the TV will switch over to it. In theory, at least… More on this later.

Although we said the RedEye Mini supports learning, you may well find you don’t need to use this feature since the system includes an extensive IR code database you can access for no extra cost.

So far, the RedEye Mini has ticked plenty of the right boxes. Shame, then, that it falls down pretty heavily when it comes to that age old universal remote problem of ease of use. For frankly, we found the process of getting a RedEye Mini up and running pretty darned horrendous. 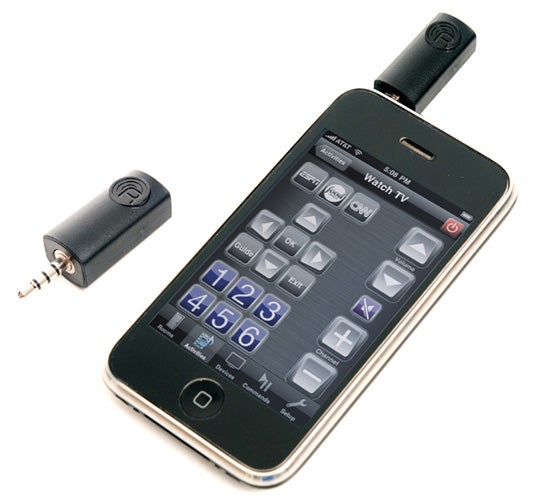 Physically inserting the IR dongle into your iDevice’s headphone jack isn’t a problem, and the software installs easily enough. Your first stop after that should be ensuring that your iDevice’s headphone volume is set to max, to deliver the maximum power possible to the IR transmitter. This could, of course, require you to turn the volume down again when listening to music via headphones. This could become a bit tedious if you have to keep adjusting the headphone volume a lot, but it’s not really a big deal.

Definitely a big deal, though, are the difficulties you come across when simply wanting to add devices to your RedEye database. Press the set up button, and you’re presented with a daunting looking series of options. Having located the ‘add new device’ option, things get more straightforward for a bit as you just tap in the brand and model name of the device you want to add. 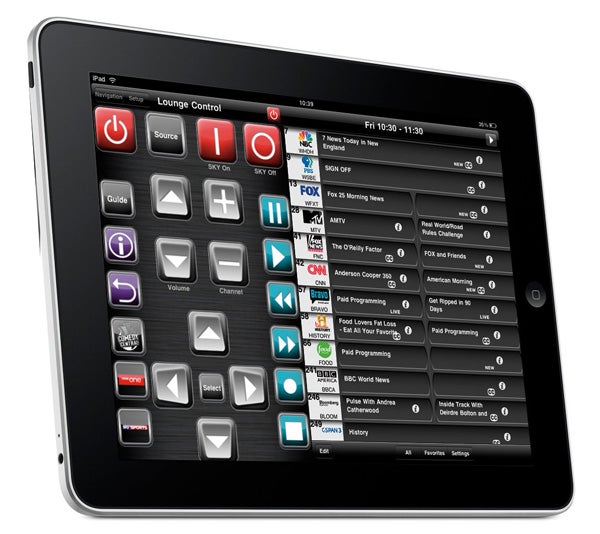 However, this doesn’t lead to the device immediately finding just one set of correct commands from the RedEye database. Instead you get a long list of command database options, all unhelpfully distinguished by a large ‘catalogue’ number, which have to be manually tested with your device one by one until you find one that works. This can be very time consuming and tedious, especially as the software doesn’t track which options on a database list you’ve already tried, meaning you have to remember yourself the long number of the last one you’ve just tried.

To be fair, with around two-thirds of the devices we tried to add to the RedEye Mini, the first or second options on the list of command sets turned out to be the right one. But in other cases we ended up getting way down the list before we stumbled on the right option. You can’t help but think that the RedEye Mini could have streamlined this process, especially as it lets you input the exact model number of the device you want to add to its control database.

The potential for confusion grows, moreover, once you’ve actually found the right command set for your device, as you’re faced with a rather bewildering and time consuming process of manually tweaking the long list of commands associated with your chosen command set into something that fits more precisely with your particular device.

The good news is that your efforts are fairly handsomely rewarded. For touching the Navigation button on your iDevice screen after going through all the stages just described presents you with a virtual button layout that approximates handsomely to a normal remote control.

Unfortunately, though, at this point you’ve just scratched the surface of what you really need to know about the RedEye Mini. For if you really want to use it to its fullest, you’re going to have do deal with the extra level of complication added by the RedEye’s Activity and Room ‘layers’.

While these do ultimately streamline using the RedEye with macro and device-switching shortcuts, we found the process of setting them up such a mammoth chore that were we not reviewing a RedEye Mini for our jobs, we would have just given up.

The provided instructions pamphlet has practically nothing to help you out, so the only way forward is to try and work through your issues in conjunction with ThinkFlood’s website. 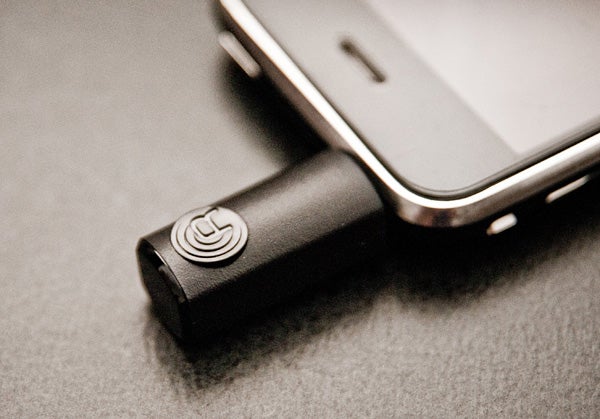 Maybe you’re thinking you can muddle through with the RedEye without bothering with the Activity and Room stuff. Well, at a push we guess you could. But if you do, you really wouldn’t be getting nearly the maximum use out of the RedEye system. And, in any case, if you’re wanting to use the RedEye with your TV, as most people probably would want to, there’s a major problem with not figuring out the Activity and Room mechanisms. Namely that when you select a programme from the RedEye’s TV listings, you will get an error message saying ‘No Activity Selected. In order to change channels, you need to choose a guide activity for this RedEye room. This setting is available from the Room Setup page’.

These might appear to be pretty innocuous words in themselves, but believe us when we say they open the door to a whole world of pain that it’s hard to imagine any normal person bothering with.

What’s particularly frustrating about this is that once you’ve (hopefully) finally got your RedEye Mini running to its fullest capability, it really is impressive. The finished control mechanisms work well, and the visualisations of your fully optimised control sets are both easy on the eye and elegantly organised. And yes, ultimately the Room and Activity sections make the RedEye Mini more usable.

In fact, the only post-set up issue we have with the RedEye concerns the coverage of the IR dongle, for we found that it only seemed to work comfortably over ranges of around 10 feet rather than the 30 feet claimed by Thinkflood, unless we pointed the dongle directly at the device we were trying to control.

In its ‘finished’ state – as in, with all of its control systems up and running and optimised for your AV system – the RedEye Mini is a remarkable achievement. It genuinely offers the sort of functionality you might get with a professionally installed AV control system for a tiny fraction of a professional system’s price.

However, our experience suggests that the chances of many folk figuring out how to get their RedEye Mini set up fully are extremely slim – unless they’ve got bags of time and the patience of the patron saint of patience.

Most users, we suspect, will fare better by downloading the separate free control apps now appearing from more and more AV brands and switching between those instead of trying to run everything through the single RedEye engine.