I briefly tried Windows Media Center Edition at home and found it to be much more hassle that it was worth. My main gripe was that I was using what was essentially a triple monitor set up – two 17in flat panels and then a TV. MCE assumes that if you have Media Center open, then that’s all you’re doing. So trying to watch a film while talking on MSN on your second display, and maybe checking a few web pages was nigh on impossible, as it would steal the mouse cursor, run off and refuse to give it back.


In the end, I found it was less hassle to just to open the film up in Windows Media Player and maximise it on the TV screen. This did mean losing out on some of the extra features, but I was trying to use MCE in a way it wasn’t designed for. 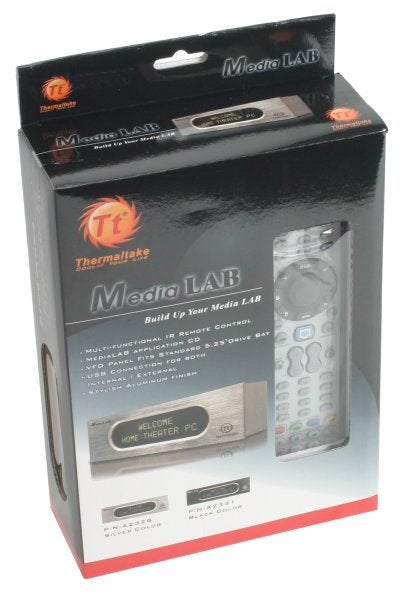 While reviewing the Thermaltake Mozart TX, I noticed that a Media LAB has been thrown in as well. After fiddling with it for half an hour, I soon realised that not only was it quite a nifty bit of kit, but it was worthy of a stand alone review. Just like the 7in panel that was part of the Mozart TX review, this is a rebadged product. Originally it is made by SoundGraph – QuietPC stocks a fair amount of this stuff. 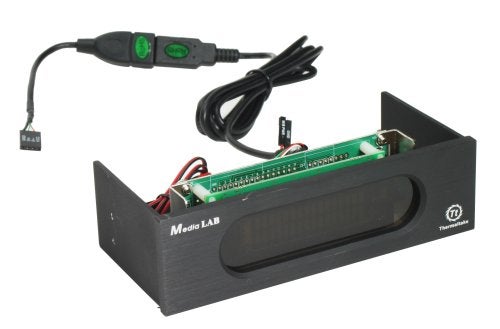 Made of aluminium and available in both silver and black, the Media LAB will fit into a standard 5.25in bay in any PC case. To power the device, a 24-pin ATX connector is included. You plug your ATX power supply in to this and then the connector into the motherboard. This way it maintains power even when the computer is switched off. This is necessary in order to turn the machine on and off via the remote control, and also to display the date and time (should you turn the option on in the software).


The display is a two line VFD display, with the traditional green colour. This is the sort of display you see on high end audio equipment and older VCRs.


What this displays is entirely dependent on the software, and up to you. I tried to get some photos of it in action, but it was particularly hard to capture. Thermaltake actually has a pretty good demonstration on its own web page. But for an example, it could be a graphical equalizer, RSS news feed, or just give you general information about your computer (should you wish to show off). It connects via USB, which can be done using a standard USB cable, or onto a motherboard header. 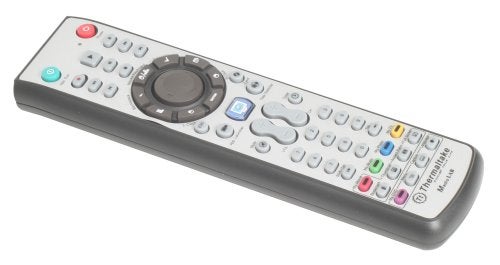 However, one of the key reasons for this panel’s existence is to give the machine IR capability for the supplied remote control.

The software that controls the whole kit is called iMedian and is actually freely available from SoundGraph. However, to get the most out of it, it is designed to work with a remote control. 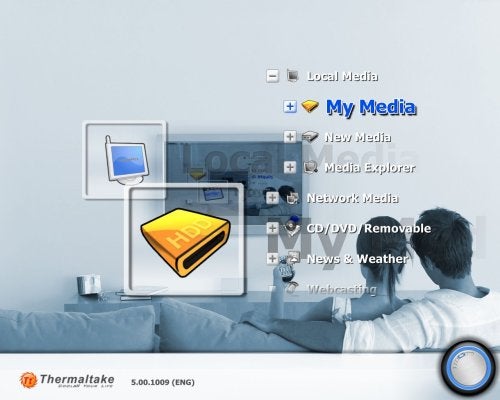 The remote control itself can work as a mouse, and a virtual keyboard is included, but I found the controller had a bit of a mind of its own and I couldn’t get much in the way of accuracy at all – but to be fair that’s not really what it’s designed for. It is also possible that my unit was faulty though, as it tended to want to float to the top of the screen. It worked best when inside the bundled software, where clicking up, down, left and right sufficed – just like in Media Center.


The software has a very intuitive interface and before long I had all of my videos and music added to the interface. 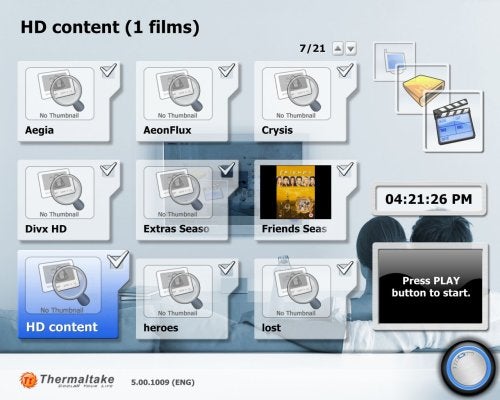 In this case, I’m just using some of the sample footage we use for testing TVs in the TrustedReviews office. 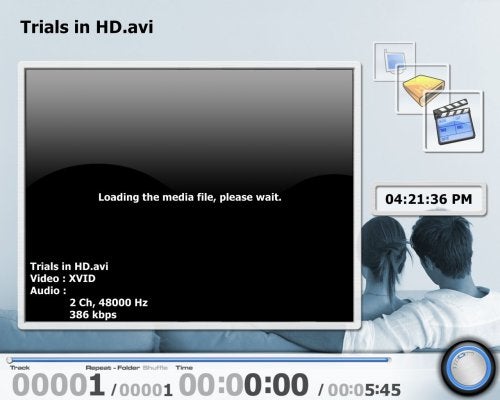 When playing media, you can do all the normal things, like play, pause, rewind and fast forward. But there is even an “aspect ratio” button. This is great if you’re running an S-Video cable to a widescreen television. This will generally be at 1,024 x 768 and videos won’t look quite right, but you can quickly and easily force content to look right on the display.


The final test, which was very important to me, was how it coped with dual displays. It passed with flying colours. It didn’t try to steal the mouses focus, and it even remembered the last display the application was loaded on. So pressing the media button on the remote control, made sure the software always loaded up on my TV and not on my desktop.


The software is full of little features, such as a timer for shutting down your machine when required, and it runs smoothly, while not chewing up too much in the way of resources.


The VFD panel looks great and can be put to good use. The remote control is well designed and has options for everything you’ll need to change. If it isn’t on there – you can program it yourself. The iMedian software is excellent and a clear alternative to MCE. However, it may not work with all TV Tuners. As the iMedian software is freely available, I recommend downloading it first and deciding if you like it (and testing for compatibility with your TV card).


At £49.99, this is an absolute bargain and a must have for anyone who doesn’t want to purchase a Media Center Edition license.