Just when you thought it wasn’t possible to cram any more features into a desktop NAS appliance along comes Thecus and its latest N5200 RouStor. This is the first of its kind to support up to five SATA hard disks and it also brings RAID-6 into the picture. Normally seen on higher end disk arrays, RAID-6 offers dual independent parity and can survive the loss of two hard disks. A great idea but it seems a tad excessive for a desktop storage box as it requires a minimum of four disks to function and it eats up an inordinate amount of raw storage capacity.


We equipped the N5200 with a quintet of 250GB Western Digital WD2500 SATA/3Gbps drives and configured them as a four drive RAID-6 array with hot-standby which resulted in less than 0.5TB of useable storage. You do have plenty of other array choices though as the N5200 also supports RAID-0, -1, -10 and -5 with the latter likely to be the best choice for most environments. 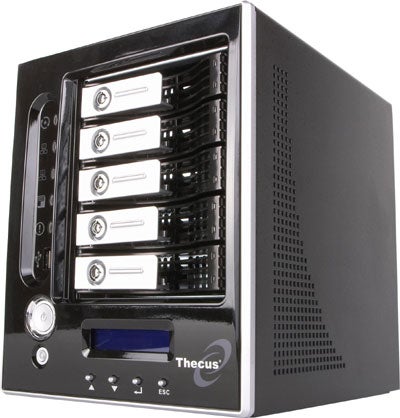 There’s much more as you also get five Gigabit Ethernet ports with four amalgamated into a switch for LAN duties and the fifth set aside as a WAN port. As the name suggest, the appliance performs routing between the LAN and WAN ports and you can also stop your local users from accessing the WAN port. The features list doesn’t end there either as the N5200 uses a low-voltage 600MHz Intel Celeron M processor, comes with 256MB of memory and offers three USB 2.0 ports and even an eSATA port as well.


The N5200 can be purchased diskless as the Linux OS is implemented on a separate 64MB IDE CompactFlash card. Build quality is impressive as the chassis has a solid steel shell and the smart, black front panel has plenty of status LEDs. The blue backlit LCD panel runs through displaying the state of the RAID arrays and the system fan plus the IP addresses for LAN and WAN ports. The buttons below can be used to manually configure the IP addresses if needed. With five drives in the storage equation cooling needs to be good and the appliance has a large fan in the back panel and another for the power supply. Suffice to say there is some operational noise but we didn’t find it intrusive.


Thecus hasn’t done much work on sprucing up the web management interface as it’s pretty much the same as that offered by its N4100 which we reviewed well over a year ago as the Evesham Technology SilverSTOR XS. The interface provides a row of tabbed folders and you start by creating your RAID arrays and settling down for a long wait. Our RAID-6 array took nearly five hours to build and the volume wasn’t made available until it had completed. Usefully, you can migrate mirrored and striped arrays to RAID-5 but this is just as lengthy a process. We migrated a dual-disk mirror to a four drive RAID-5 array which took over three hours and all shared folders went offline during this process.

Nevertheless, general performance over Gigabit Ethernet is good with Iometer reporting 53MB/sec raw read throughput with a share mapped to a Supermicro 3.2GHz Pentium D workstation. Copying a 691MB video file to the appliance delivered good real world write speeds of 25MB/sec while reading it from the array returned 26MB/sec.


Client support has been improved as the N5200 can handle Windows, Linux, Unix and Macintosh users and it also provides FTP services. Share security options start with the local user and group database but the appliance can use NT domain and AD authentication while ACLs (access control lists) using local username and password combinations and group memberships can be applied to each folder. 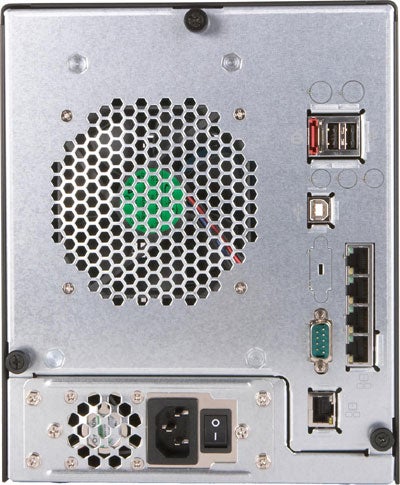 Once your array has initialised you get three default folders with one for copying attached USB devices. Just press and hold the down arrow button on the front panel and the device contents will be automatically copied to the default folder and shared ready for network access. The USB target folder ties in with one of the USB ports as the appliance can be connected directly to a PC. When a volume is created you decide how much space is to be made available and this will appear as a local drive on the PC.


The Nsync folder is used for appliance to appliance backup which can be scheduled to run at regular intervals. You can also use this feature to back up selected folders on the appliance to an FTP server and we tested this successfully by securing a test folder over to an Iomega NAS 200D. There are plenty of other backup options as snapshots can be run manually or scheduled and Thecus bundles its own client backup software which although limited in features does allow users to secure selected folders to the appliance and schedule full and incremental backups.


There may be plenty of choice at this level of the NAS appliance market but the N5200 RouStor is going to be very hard to beat for features although the RAID-6 function will cost in terms of available capacity.

Thecus’ Setup Wizard eases installation by searching the network for its NAS appliances.

The N5200 offers one of the most comprehensive ranges of RAID array support.

Array migration allows you to swap from a mirror or stripe to full RAID-5 – but not RAID-6.

The Nsync tool allows you to backup selected folders to another Thecus box or an FTP server.

The client backup utility is basic but does allow you to select multiple sources and copy them to the N5200 to a schedule.