This is Thecus’ pitch at the affordable two bay NAS sector. It combines consumer-friendly looks with an unusually large amount of grunt and a decent price. But is everything as it seems? 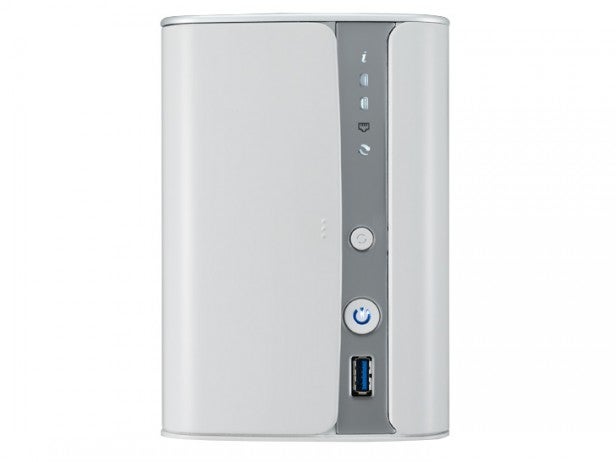 From the outside the N2560 looks a lot like the WD MyCloud EX2. It shares the same curved design, rounded corners and even the choice of blue LEDs. At 166 x 114 x 210 mm and 1.35Kg (unpopulated) it is also a similar size and weight.

Unfortunately what both also have in common is that on closer inspection, neither are particularly well built. The N2560 has a plastic chassis which feels somewhat flimsy and the front drive door uses a plastic hinge which raises questions about its longevity.

The good news is Thecus has used a tool-less drive installation system and from a distance few are likely to have complaints in a sector where aesthetics are low on the priority list. Its a decent looking NAS, but one that shows its budget roots on closer inspection. 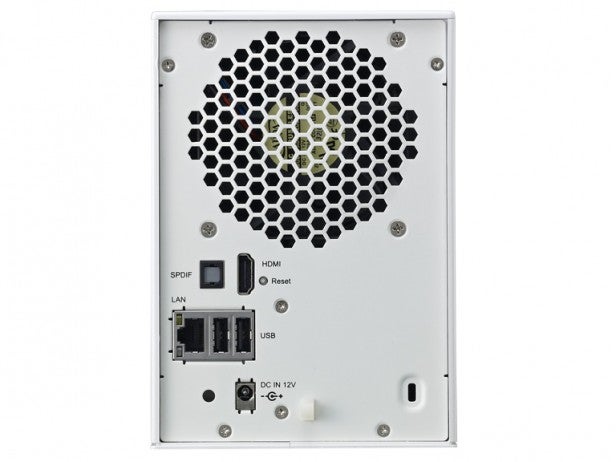 Where Thecus is looking to attract owners, however, is on performance and the company has done a good job in cramming the N2560 full of decent hardware.

This begins with an Intel Atom 1.6GHz dual core chip and 2GB RAM at its core. The latter in particular is notably double what we are used to from rivals in this sector and Thecus follows it up with an array of connectivity, including Gigabit Ethernet, 1x USB 3.0, 2x USB 2.0, HDMI and SPDIF.

HDMI and SPDIF will cause interest as Thecus is keen to push the N2560 as both a NAS and media centre. It backs this up with access to the popular XMBC open source media player and its T-OnTheGo and T-Dashboard apps provide remote access to media and the NAS’s status respectively.

Where Thecus has a major weak spot though is its RAID arrays. Unlike Synology (SHR), Drobo (Beyond RAID), Netgear (X-RAID) and others, Thecus doesn’t support a dynamically expandable RAID protocol. In fact just RAID 0, RAID 1 and JBOD are available.

Consequently inserted drives must have a matching capacity (or they are both limited to the size of the smaller one) and any attempt to expand your storage with larger disks results in having to remove the data and start again. With NAS increasingly finding a mainstream audience this is a significant omission, even if it is not alone. 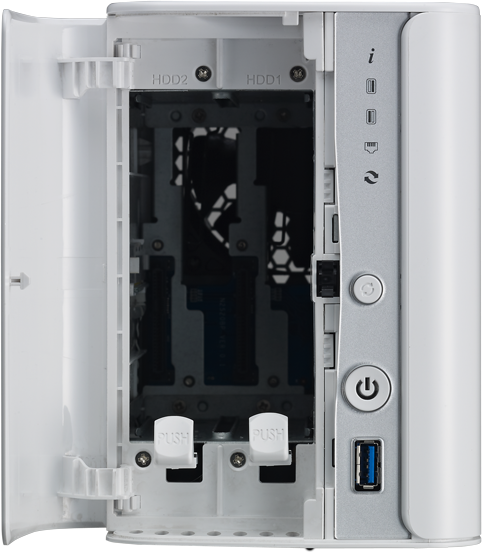 Where N2560 owners will also find reason to grimace is the setup process. The good news is the N2560 has a tool-less drive installation system. You simply fix plastic strips to the left and right sides of your HDDs (2.5-inch drives will require a separate adaptor) and they slide into place.

Again build quality was an issue here as our N2560 had a tendency to vibrate when they were installed, but an old fashioned tap was enough to stop it.

Once up and running users visit ‘install.thecus.com’ in their web browsers. Unfortunately rather than this being the queue to begin a setup wizard like Synology and Drobo, it is just a link to selecting your NAS, operating system and picking a software download link. The ‘Intelligent NAS’ software then detects your drive and asks you to choose your RAID type. 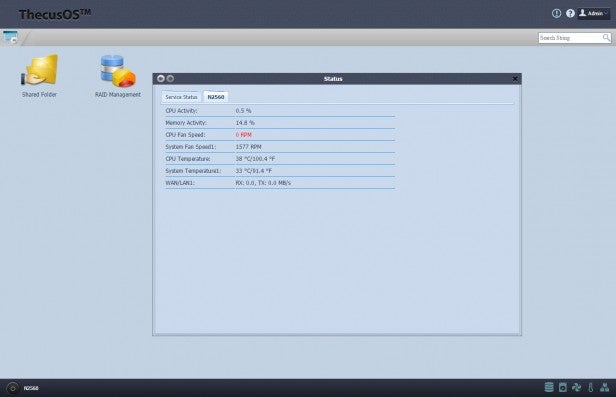 From here there is no wizard and you are on your own. For the record, you manually enter the signified IP address and type in your password (admin/admin) and are left to your own initiative to explore the windows-installed interface and maybe change those vulnerable login credentials.

The good news is the NAS automatically creates some pre-shared folders (six no less – including a bittorrent folder – and nine subfolders). The bad news is only one window in the UI can be opened at once and there are no live widgets. The N2560 may pitch mainstream, but unless you have a bit of tech savviness you will feel out of your depth quickly.