It might hail from the home of Final Fantasy, but The World Ends With You is a departure for Square-Enix, embracing a very different style and setting to the company’s traditional epic fantasy RPGs. That’s partly because, where previous DS efforts have been adapted from existing games or series for Nintendo’s handheld, The World Ends With You has been built from the ground up with the system in mind. And if the result isn’t quite as masterful as we might have hoped for, it’s still one of the most interesting DS games we’ve seen for a while. 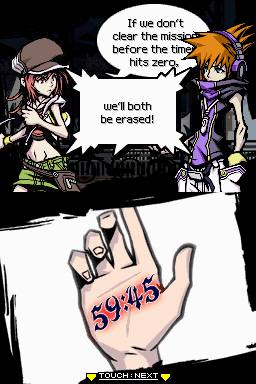 Here the setting is modern-day Tokyo, and the bustling, youthful Shibuya district to be precise. In a plot that seems part The Matrix, part Home and Away, a withdrawn and petulant teen – Neku – finds himself pulled out of conventional reality into the underground universe of the Reaper game, where teens like himself become Players, with strange messages appearing on their mobile phones, weird badges (or ‘pins’) arriving in their pockets, and a timer counting down towards their doom. Neku has seven days and seven missions. Each must be completed before the timer runs down to zero, or Neku will be erased. What more incentive does a young guy need to play along? 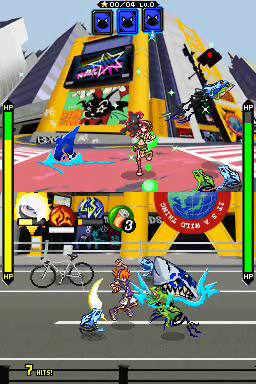 Well, when you’re as much of a hormone-addled chimp as Neku, quite a lot, which is why he’s lucky to fall in with a partner – cheerful wannabe girl fashionista, Shiki – who can drag him kicking and screaming through the game’s initial stages. Together, Neku and Shiki must escape the clutches of the murderous Reapers who hunt down players, survive the challenges set by their masters, and get to the bottom of the mysterious game itself.


It’s an intriguing setup, but not as intriguing as the style. The World Ends With You has a cartoon style reminiscent of Capcom’s Viewtiful Joe or Killer 7, with a spot of Jet Set Radio in the mix. It’s a sharp, exuberant look perfectly suited to the ultra-modern Japanese setting, and the character and creature design sits perfectly in harmony with it. Few games have used the quirky dual-screen format of the DS so effectively as a vehicle for comic-book cut-scenes, and the use of graphic novel framing devices and the game’s episodic feel gives the game a slick, cutting-edge feel. Where Square-Enix has sometimes struggled in the past to make a home console style work on the DS, here the look feels perfectly tuned to the platform.

The World Ends with You is basically an action RPG, but one with a difference. While there’s a certain amount of exploration and dialogue to get through, as in any decent RPG, a lot of gameplay will be spent combating the ‘Noise’: evil entities summoned by the Reapers to give the Players a hard time. This actually takes place across both DS screens simultaneously. On the bottom screen Neku uses psychic powers, assigned to the various collectible pins, to deal out damage to the Noise while healing himself and his partner. To manage this you can click and drag on the touchscreen to move Neku around, and then hit your foes with a number of different strokes. Assign the lightning pin to one of your available slots, for instance, and tapping on an enemy will bring on a blast of elemental fury straight at them, while slashing across them will cause Neku to hack away at his target or cause him to throw objects at them – again, depending on what pins you have currently assigned. 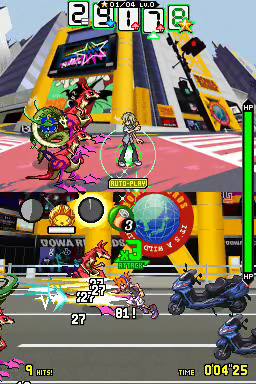 At the same time, Shiki battles the same enemies on the top screen using a simple beat-em-up combo system based on the D-pad (or the face buttons if you’re left-handed). Cleverly, the two work in synch. When Shiki lays out a particularly devastating combo she passes a glowing green globe down to Neku, who can maintain the chain of pain by unleashing equally vicious assaults of his own. A few hours in you’ll also get a new ability where, by chaining together particular combos, you can unleash a special synch attack where both heroes work together to knock the Noise for six. 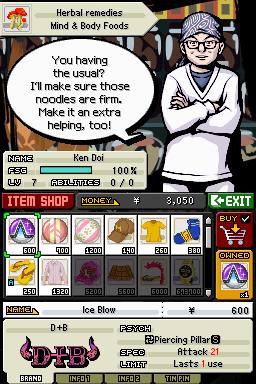 It sounds complex, but the game is smart enough to take over control of Shiki should you be too busy with Neku on the bottom screen, and it’s not long before you realise that there’s a rhythm to the combat and a number of ways in which you can use your two characters together. All the same, it should be noted that this is a very combat heavy game, and that the combat is a) repetitive and b) lacking in challenge or tactical variation. Don’t be dissuaded – just be warned.


I say this because it’s not the fatal flaw it first appears. For the first few hours of The World Ends With You you’ll find yourself fighting Noise after Noise after Noise while completing almost ridiculously simplistic objectives, wondering whether this is all there is, and if so, why bother? By Day Three, things pick up. The game opens up its drama from Neku and Shiki to take in a sizable cast of supporting characters, then throws in a range of additional systems that steadily build up in complexity. Not only are there all the pins to collect and try on for size, but there’s a whole fashion system to cope with, where different clothes can be purchased and equipped, each having different effects. These in turn tie in to a slightly bizarre trend system, whereby you’re rewarded for wearing the current in brands and penalized for sporting yesterday’s look. On top of that, you’ll be collecting and implanting thoughts in the heads of the local population, intervening in personal disputes, rigging the Japanese equivalent of the coin toss or Magic 8 ball, and getting friendly with the local shop keepers so that they will sell you their best and rarest gear. You’ll even have to work out the varying qualities of different foods. Basically, The World Ends With You is not as simple or as superficial as it first appears.

The game has other good ideas too. For one thing, random encounters are out. Each Shibuya street scene has its own selection of Noise battles, but you only go into battle once you scan the environment and click on a fight. For another, you can vary the difficulty of battles or even string a series of fights together, the benefit being that you’ll get more experience points for your pins and their powers and more loot when you win. 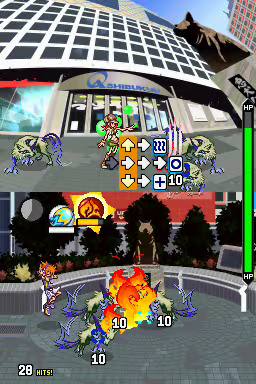 On the negative side, the combat will still wear you down from time to time, and The World Ends With You is not a game I can recommend to anyone and everyone. It’s easy to see that the game was developed with a youthful Japanese market in mind, and everything from the milieu to the characters to the storyline bears this out. While there are some great moments in the plot and a nice arc that takes Neku from self-absorbed cretin to a more caring, sharing kind of guy, the narrative will play better to those with an interest in modern Japanese culture or even a little knowledge of today’s Tokyo. What’s more, there are some other irritations. There’s a limited selection of music, meaning your ears will be assaulted time and time again with the same Japanese pop tracks. Worse, there are several points where you can’t save in between cut-scenes and boss battles or between several difficult fights. While the difficulty level isn’t painful, to find yourself sitting through the same two minutes of cut-scene followed by an initial, pre-boss battle again and again and again can and will leave a sour taste in your mouth. 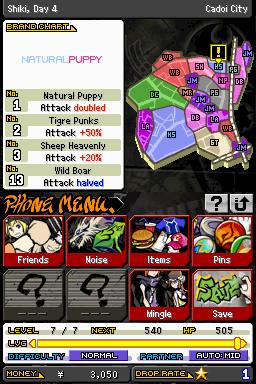 The World Ends With You is a fine game, but a bit of a niche taste. I’ve grown from not really getting it to liking it to getting mildly obsessed with it, and I suspect some others will feel the same. If you’re a Japanophile, or if you loved Jet Set Radio or the likes of Okami, Killer 7 and Viewtiful Joe, then it’s even more probable that you’ll enjoy it. If not, you may feel mystified or even hostile, and for that reason you should probably steer clear. That said, Square-Enix should be commended for venturing so far from the beaten track, and I’d still push The World Ends With You if you’re in the market for something more unusual. It might be too repetitive, too niche and too combat heavy to be the unique DS RPG we might have dreamed of, but it’s a compelling, stylish effort all the same.


The style, story and setting won’t please everyone, but anyone looking for a trip away from the RPG mainstream will be rewarded with a cool and surprisingly deep DS game.