Available on Android, iOS, PC and Mac
There’s long been an argument amongst developers that the shiny smartphones and tablets we carry around with us day in, day out, aren’t the ideal home for what some like to describe as ‘serious’ games.

Whether due to the control method or the type of gamers playing them – Candy Crush Saga fans akin to devil worshippers in some folk’s eyes – it’s deemed that core releases simply aren’t a good fit for mobile devices. It’s a debate that’s been raging for as long as mobile has been a known entity, and there’s no sign of one side winning out.

In terms of this dispute, The Witcher Adventure Game should be an ideal test subject. Here we have a rather intense board game based on an RPG series from the universe of Polish fantasy writer Andrzej Sapkowski. Safe to say, Flappy Bird this is not. This is a core game released for core gamers that’s also hit a core platform – PC – at the same time. So, what exactly is it doing on Android and iOS? 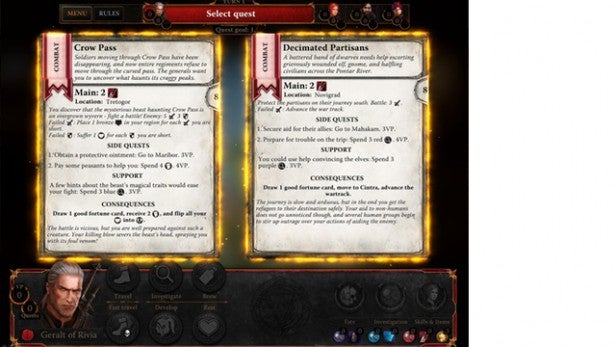 First things first: If you’ve never played a board game of this type before, The Witcher Adventure Game is arguably not the best place to start. This is not like a game of Monopoly – this is a deep, fantasy based adventure that’s especially text heavy and, owing to the fact the a large portion of its audience can play these kinds of board games in their sleep, comes with especially little explanation. In essence, that means there’s no easy way of judging what The Witcher Adventure Game has to offer – your opinion of play will differ wildly based on your experience (or lack of) with the genre.

If you strip things back to pure content, The Witcher Adventure Game does not disappoint. At the start of play, you can choose to take on one of three missions of varying length – the shortest on offer coming in at somewhere between ten and twenty minutes. The Witcher Adventure Game also offers an identical online mode, connecting you up with three other players to take on the board at once, though every time we tried it, it errored out.

Despite such issues, there’s enough to contend with in the offline mode to keep you engaged. At the start of each game, each character (on offer are Triss Merigold, dwarven leader Yarpen Zigrin, the bard Dandelion, or Witcher Geralt of Rivia) has to choose a quest that – aside from the various offshoots that pop up along the way – defines their journey. It’s then a case of moving around the board when it’s your turn, either investigating the locations on offer or developing your skill set. Both actions involve the playing of cards, with the former often setting side goals to hit along the way. 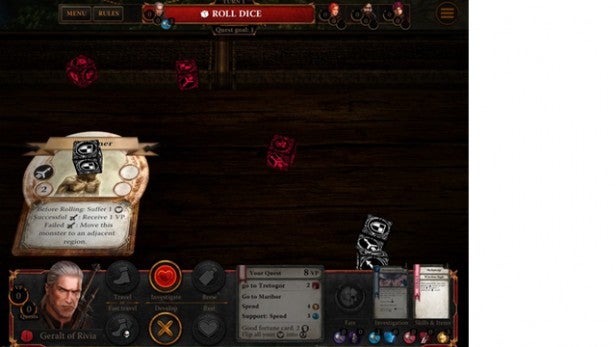 Also of interest are the battles that ensue when you encounter creatures blocking your path. These are governed by the roll of the dice. To win, you need to hope that the symbols thrown match those required for a successful attack or defence. Victory earns you extra points that are crucial come the end of play, though if you lose out, one of your moves – investigating, developing or travelling – is temporarily put out of action.

Long term victory, however, is a case of reaching your quest’s goal before your rivals, who each then get one more turn before end of play. Whoever has the most points at that point is declared the winner.

That, in a nutshell, is it. The nature of play ultimately depends on the difficulty of the quest you’ve taken on, the quality of the opposition and the length of game you opted for. The structure of The Witcher Adventure Game, however, doesn’t change. What makes this particularly interesting is, at the same time as this iOS, Android and PC release, a physical board game with the exact same gameplay has hit the physical stands as well. This is a literal digital copy of a physical game. 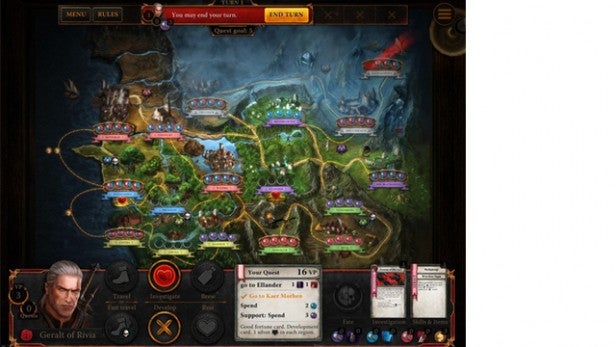 And that, perhaps, is where its weakness lies. For dedicated fans of the board game genre, The Witcher Adventure Game is arguably a little too simplistic and straightforward. Conversely, if you’re a total newcomer, the game makes absolutely no attempt to explain what it’s about, what it wants from you or even how you play. It sits in an awkward middle ground and seemingly ticks the boxes of neither the core nor casual player.

Nevertheless, there’s no doubting that, in terms of gameplay, The Witcher Adventure Game is a solid and entertaining take on the board game genre. With a little more thought as to how it would translate for a mobile audience, developer CD Projekt RED could have made major waves for the genre as a whole, introducing it to a new audience. Instead, it’s simply dumped a PC release on iOS and, while it works perfectly well for those in the know, it arguably only helps fuel the fire that claims games like this simply aren’t made for mobile.

Verdict
Too obtrusive for newcomers but arguably too light for board game aficionados, The Witcher Adventure Game makes good use of its license and has a solid take on the genre to offer, but is perhaps neither difficult enough nor welcoming enough to appeal to a set audience.