Have you any idea just how difficult the job of a editor is? I can assure you, you wouldn’t want to see these reviews before they’ve been sifted and shaped on the digital desks of the big bods at TrustedReviews. For example, before our trusty Games Editor got her hands on this particular piece of prose, this entire opening was a particularly throwaway anecdote about some peaches I bought at Tesco that turned out to be slightly off.

Knowing what to change, what to keep, what to embellish and what to strike out altogether is the daily challenge that faces any editor worth his or her salt – and that’s before you even consider whether a particular story is worth covering in the first place. The Westport Independent places the role of your average local newspaper editor front and centre, though this particular editor comes to power at a moment in history when the fate of the nation is in flux.

It’s 1949, and the country is under the thumb of a new Government – a Government keen to keep the populace placid and oblivious to its plans. This is a police state, where the media is to be censored, the message controlled, and any criticism of those in power met with an iron fist. Leading The Westport Independent through these difficult times, it’s your job to decide what goes in and what’s cut out of the paper in the 12 weeks leading up to the enactment of the Public Culture Bill – outwardly a new law designed to ensure the general public aren’t exposed to immorality, but in practice a way of ensuring the media toes the Government’s line. 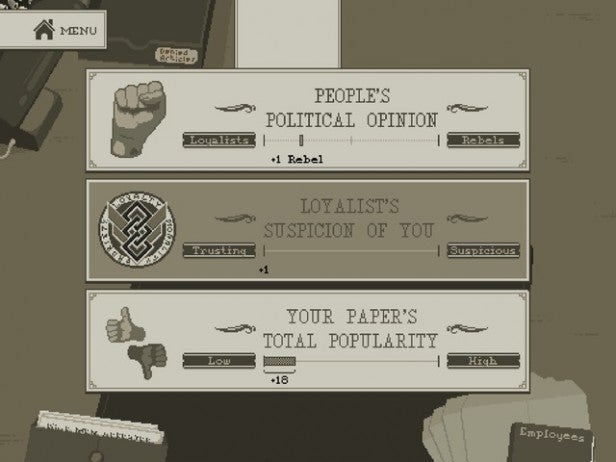 It’s up to you to decide whether to play along, posting positive stories to ingratiate yourself with a Government that has the power to crush you, or whether to use the paper’s last moments of freedom to whip up public opinion against the country’s new overlords. This means choosing which stories to publish, deciding on an angle, and picking out which juicy titbit is perfect for your front page splash.

You can only publish up to four stories per issue, which means wading through the assortment of different leads – from police crackdowns and job losses to lighter stories typically focused on celeb nonsense – is an undertaking in itself. Once you’ve opened up a story, you can choose to strike out certain bits of information and even change the tone of the headline. Police brutality, for instance, can easily be switched to a fair response to rebel anarchy that threatens law and order.

The next decision focuses on just who you get to pen each story. Half of your staff are loyal to the new regime, while the other half are suspicious of their intent. As a result, some may refuse to write whatever angle you offer them, and if one writer is seen to be pushing ‘anti-Government propaganda’, they risk arrest, or perhaps even worse. As such, The Westport Independent is a massive balancing exercise.

If you choose to support the Government – and, indeed, at no point does the game suggest you shouldn’t – you’ll find life flows by fairly easily. Staff room snippets between issues may signal discontent amongst your writers, but on the whole you’ll encounter very little difficulty; the Government will stay off your back, sales will rise in loyal regions of the city, and you’ll be treated to a closing block of copy that details your value to the powers that be and the public’s slip into political indifference. 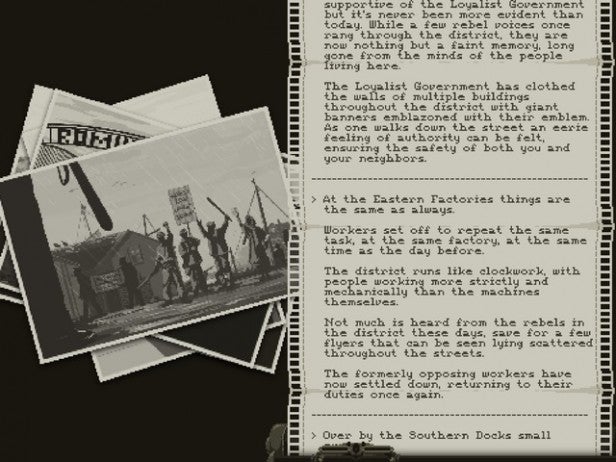 Slowly start to poke that same public with a big stick, however, pushing forward stories that undermine the Government’s line and highlight its apparent malevolent nature, and you’ll see the people – the workers, the grafters, and even the middle classes – rise up against the Government and fight back. The aforementioned balance, however, comes from managing to do this without seeing the paper closed down before the end of the 12 week run. With those in charge monitoring your every word, the trick is to drip feed your readers stories that highlight the oppressive nature of the Government without the paper being earmarked for closure – a balance that, by and large, takes a fair few playthroughs before you master.

Indeed, The Westport Independent seems designed to be played and played again. It’s an especially short experience, but the scope is surprisingly huge. With the game giving you free reign decide just which audiences you market the paper at, it’s perfectly possible to push out an Anti-Government rag that, in the end, sells bucket loads in the initially compliant suburbs. Deciding just who you want to think what is the meat at the heart of play. 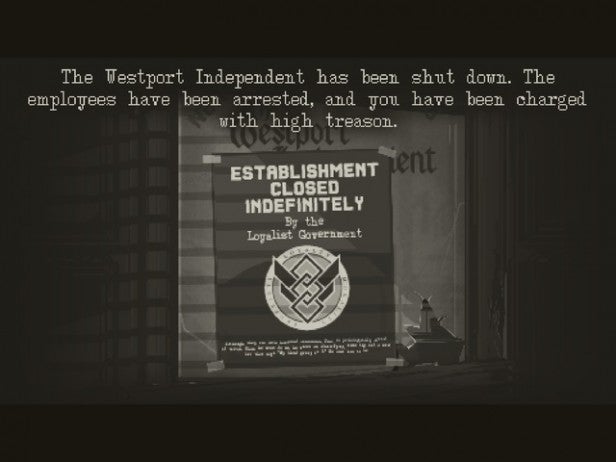 In fact, what makes The Westpoint Independent particularly perverse is the fact that, as editor, you’re equally vulnerable to taking the angle someone else wants you to take. You never see the atrocities described in the stories that land on your desk nor have first hand experience of just what the Government’s motives are – your view is entirely shaped by the words in front of you, which completely mirrors your role in play. As such, it’s not hard to imagine that future updates could flip things on their head completely and reveal that the line between good and evil isn’t quite as clear as the news reports make them out to be.

As things stand, though some may argue that The Westpoint Independent is too short and doesn’t make enough of its premise, never has a game on the App Store/Google Play/Steam made such a point of stressing just how powerful the written word can be. For that, developer Double Zero One Zero deserves to make a few headlines of its own.

Verdict
Though likely short for too many people’s liking, The Westport Independent’s focus on the power of propaganda – and the delicate balance editors face when operating in a police state – is designed to be played over and over, with few games offering players the power to suffocate an entire population’s spirit or be the spark that fires a revolution, all with nothing more than the written word. Double Zero One Zero has undoubtedly served up a unique experience, we’d just like a bit more of it.