Available on Xbox 360, PS3 (version tested), PC
Download from Xbox Live Arcade, PSN or Steam
While based on Robert Kirkman’s comic books rather than the Frank Darabont TV series they inspired, anyone coming to the first episode of Telltale Games’ The Walking Dead adaptation from either won’t be too put out by what they find. This isn’t Resident Evil, Left4Dead or any other fast-paced zombie-blaster, but a deliberate, tense adventure game with the focus as much on character and human-to-human interactions as on the constant threat posed by hungry and worryingly active corpses. It’s a dark, sometimes brutal and strangely melancholy piece of work which operates so well on a dramatic level that you can easily gloss over whatever faults it has as a game. 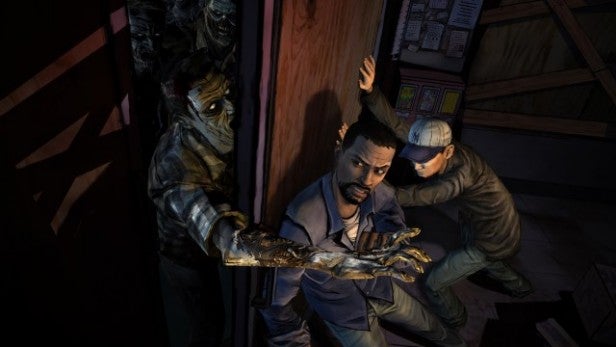 Different Dead
Fans might be mildly disappointed by the absence of officer Rick Grimes and other stalwarts of the comic book and TV series, but the story Telltale has chosen to tell instead provides a new perspective on the zombie apocalypse while staying true to the spirit of The Walking Dead. In A New Day your protagonist is Lee Everett, a man on his way to prison for murder. When the car he’s travelling in is involved in an accident, Lee awakens to find himself alone in a hostile, dead-infested world.

The less you know about what follows the more you’ll enjoy it, but it involves fellow survivors, some sympathetic and some less so, a few dangerous situations and hordes of decomposing shambling horrors. Some key characters from the series and the comics put in an appearance, but it says a lot about A New Day that – so far – this story can stand up on its own. 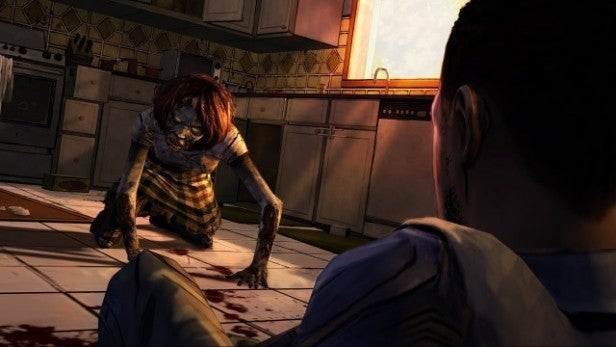 Controls and Gameplay
On the console formats the game uses an elegant control system. The left stick moves Lee around in a third-person viewpoint while the right moves a cursor which can focus on characters or objects. Doing so brings up a selection of up to four options, mapped to the action buttons on the face. Using these you can engage other characters in conversation, use objects you’ve picked up on other objects or other people, or just take a closer look what you’re focussing on.

If you want to be reductive about it, the actual gameplay comes down to three things: talking to your fellow survivors, solving simple puzzles or fending off and fighting your more cadaverous chums. The puzzles hark back to classic adventure games, with the emphasis on finding the right object for the right situation, while conversations follow the same kind of pattern as in, say, a Mass Effect; you pick an opening gambit or response and the dialogue branches off from there. The difference with The Walking Dead is that, in many cases your responses or your actions have a time limit. Normally we might find this annoying, but the time limits aren’t impossible and it all adds to that all-important sense of tension, panic and fear.

Anyone who sampled Telltale’s Jurassic Park games with their dubious quick-time event sequences might fear a return in The Walking Dead, but while there are some isolated ‘press this button right now’ moments, the game prefers to play its action using the same controls as its puzzles, which gives you a bit more of a sense of urgency as you try to focus on a zombie’s head as it crawls towards you or on a fellow survivor being dragged off by an undead mob. Sure, there’s the sense that you’re participating in a pre-scripted interactive movie, but only to the same extent as an LA Noir or Heavy Rain. 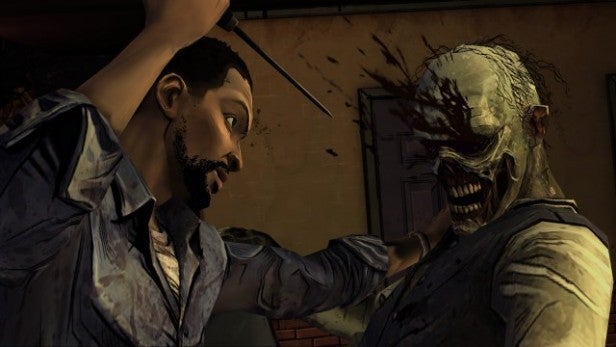 Telling the Tale
What makes The Walking Dead work so well is its atmosphere, its strong storytelling, its surprisingly rich characterisation and the sense that your choices make a difference. The comic-book visuals aren’t the most detailed we’ve ever seen – though they’re well-lit and animated – but they do a convincing job of creating a vision of a world gone to Hell and of human characters who have seen the worst that world can offer. And while those characters don’t shift too far away from classic zombie movie stereotypes, they’re more well-rounded than you might expect and sometimes very sympathetic. The music is gloomy and sombre when it needs to be, then frenetic and shocking when the occasion demands, and the general standard of dialogue and acting is top-notch. This isn’t merely a game about surviving, but about living with what it takes to survive. In its best moments its genuinely affecting stuff.

Particularly so, because A New Day isn’t afraid to hit you with tough choices and make the consequences of your decisions matter. You’ll decide who lives or dies, either save lives or inadvertently help end them, make friends or make enemies and inspire either trust or suspicion in your fellow man. At this stage it’s impossible to tell how all these choices will play out, but TellTale promises far-reaching ramifications as the series progresses, with each episode pulling data from the last save game and using this to decide how things play out. As it stands, you’ll end up feeling unsure that you’ve done the right thing and even guilty by the time you reach A New Day’s conclusion. It’s rare for a game to elicit that sort of response – and doubly so for a game involving zombies. 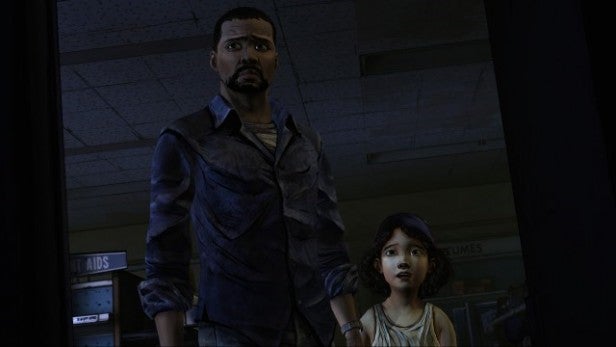 Puzzles and Dilemmas
Strip the game back to its mechanics and there are some issues. The puzzles are, for the most part, pitifully simple and unlikely to challenge any adventure game fan. In fact, if you’re an experienced gamer we’d advise you to pick the option to play with a minimal UI, as you’ll find the game much more satisfying that way. It also has to be said that, on a second playthrough, some choices aren’t as significant as you might have thought. While you can affect the direction the episode takes, there’s a limit to how far those consequences seem to go.

On balance, though, this isn’t as important as you might think. We’ll only begin to see how the branching pans out once we’re through the first half of this six episode season, and this first episode more than does its basic job of dragging you into the story, keeping you gripped and making you care. The test of any episodic game is how keen you are when you reach that cliffhanger conclusion to play the next part. By the time A New Day had run its three-hour course, we couldn’t wait. A second playthrough later, that still applies. 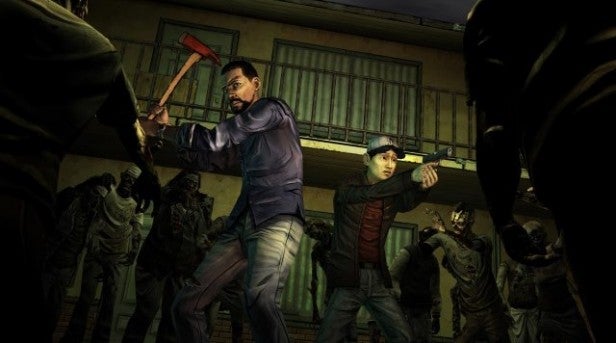 Verdict
This first episode of The Walking Dead gets the video game adaptation off to a cracking start. Despite simplistic puzzles it’s a gripping adventure, with characters you can care about and a storyline that’s not afraid to go to all the right dark places. If subsequent episodes can maintain the pace then this could build into an exceptional series.