Available on PC (version tested) and Xbox One

Imitation isn’t understanding; so goes the fatal criticism of Alan Turing’s famous thought experiment. Machines may one day be able to imitate conversational speech, possibly so well as to convince a person they are speaking to another human, but what would this really prove? A machine can parse, but parsing isn’t comprehension. The experiment is flawed, and it’s a great irony that Bulkhead Interactive’s 3D puzzler, The Turing Test, suffers similar issues of imitation. The structural pillars of a fantastic logic game are present, but it unnervingly feels like the game has been reading from a puzzle building manual without understanding what makes dimensional conundrums so fun.

Naturally, the elephant in the room is the comparison that you’re going to hear often throughout this review: Portal. Every puzzle game to follow Valve’s physics-based gaming oddity has born it’s leaden weight. If I were to create my own game with dimensional logic challenges, I would fear its looming shadow and attempt, as far as possible, to avoid shrinking beneath its legacy. 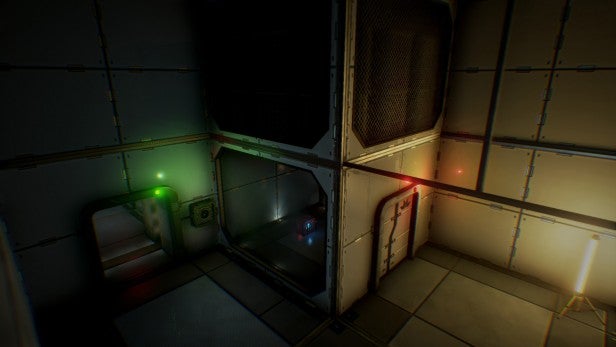 Against all better sense, The Turing Test does the exact opposite. Some of the similarities are so unavoidably direct they flash neon, begging you to make the comparison room by room, challenge by challenge. Players find themselves in a testing facility, watched over by an AI with ambiguous intentions, surrounded by white panelled walls and rooms which must be steadily reconfigured to progress. The Turing Test has arrived at the Oscars draped in the same dress as Angelina Jolie; there is simply no way to avoid the inevitable tabloid photo feature that asks ‘who wore it better?’

On that question, there can be no doubt as to the answer: it’s Portal. But The Turing Test still brings a wealth of well thought-out conundrums to the table, and in spite of its flaws, is worth the time of anyone seeking to challenge their logical prowess.

Players overcome The Turing Test’s challenges via the use of an Energy Ball Extractor Thingy – the technical term was only mentioned once. It looks like a gun but can suck up and spit out balls of energy from a distance which can be inserted into various power outlets. Most challenges within The Turing Test are variations on this mechanic. Rooms are filled with doors that must be opened, platforms that must be moved, and a whole other stack of interactable objects which must be manipulated to progress. 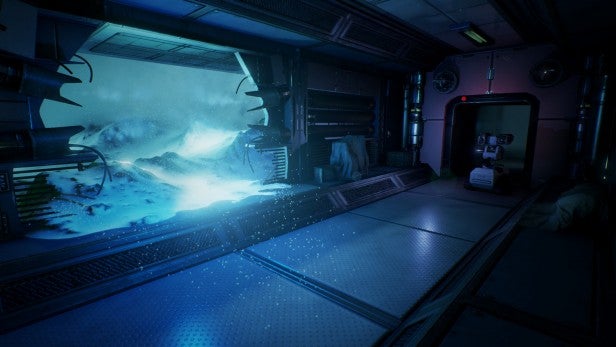 Each room, for the most part, requires a careful manipulation of these, whilst thinking about space and one’s own positioning, in order to be solved. Said orbs can only be picked up when in direct line of sight, which allows for challenges which span entire caverns.

My first hour or so was spent, rather gleefully, mastering the game’s systems and wrapping my mind around its logic. The difficulty quickly soars upwards, and for the most part, The Turing Test increments this carefully, slowly adding new variables to the mix and creating more complex puzzles. Some are devilishly hard, but there are those of us who always thought that Portal pulled its punches slightly, and this is welcome. The problem facing The Turing Test isn’t that its puzzles aren’t complex, or that they aren’t for the most part fun, it’s that something is missing.

The game lacks any sense of physicality. Where portal encourages throwing oneself, and myriad objects at high speed, The Turing Test is mostly concerned with opening doors and raising of platforms. There’s a great rush the first few times this happens, but once you’ve reached the sixtieth room and you’re still trying to bypass doors using blobs of energy, the novelty wears off.

Portal 2 had to work exceedingly hard to keep players interested in each challenge, even going so far as to introduce insane liquid mechanics which sent you soaring into the air. The Turing Test also attempts to mix things up around half way through, but the result is nowhere near as exhilarating.

The game also experiences an issue with the visual abstraction of its logical problems. Interactable items are connected by cables which indicate ‘this powers that’ or ‘this will make that move’, and working out how each piece of equipment in a room is connected requires following wires from place to place. Many of the game’s rooms are divided into separate segments, and sometimes the cables are exceedingly long which makes it hard, in the more complex rooms, to initially identify what’s going on. It’s like trying to identify the specific configuration of a circuit board if you were stood on top of it and were only 1cm tall. 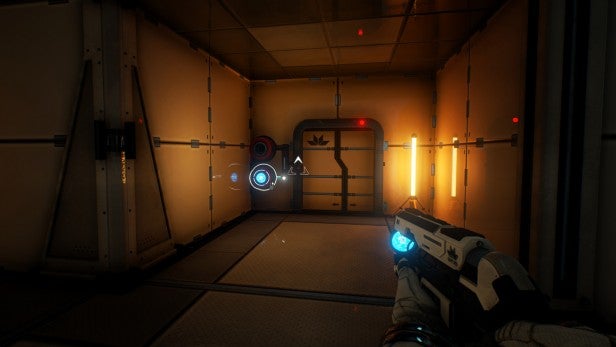 These sins, however, are forgivable for the moments where The Turing Test gets it right, and it often does. However, some sins are unforgivable. The most serious is that every so often rooms can be ‘broken’. Without wanting to give too many details away, there are certain objects which can be moved into non accessible areas and lost to players forever, forcing them to restart that particular room. It’s not a dealbreaker, but it does sightly discourage experimentation in a game which is predicated on fiddling about with stuff.

This problem isn’t eased by the massive loading times intermittent issues with missing items. Twice during my playthrough I arrived in rooms where all the objects necessary for a challenge hadn’t spawned, leading me to helplessly scratch my head for half an hour until I realised that the room couldn’t possibly be solved. This is one of several other small niggles with the game’s dynamics, such as items which appear useful but serve no purpose in solving the puzzle, that all slightly eroded my enjoyment.

It’s a crying shame because The Turing Test is an extremely capable puzzler, and I find it hard not to be impressed by the game’s sheer size, and the complexity of its logic games. Titles in the vein of The Talos Principle and Portal are thin on the ground, and I’m sure that this particular outing will scratch the itch of anyone seeking similar tests of their logical acumen. Unfortunately The Turing Test often feels like sweetener as a replacement for real sugar; you’re always aware that you’re not getting exactly what you wanted in the first place.

If you’re willing to accept a game which is slightly rough around the edges, and will remind you of Portal at every turn without actually being Portal, then The Turing Test could be for you. There’s a lot here to like: a philosophical dialogue about ethics, transhumanism and the singularity, in conjunction with occasionally brilliant design. There’s enough on offer here that I sincerely hope that Bulkhead Interactive make another game, and next time, think slightly further outside the white-panelled box than they did in this endeavour.