Note: This review is based on the Founders Pack release of The Tomorrow Children, effectively a paid-for early-access version of a free-to-play game.

I love The Tomorrow Children as a piece of interactive art. It combines cutting-edge rendering techniques with a distinctive visual style, it’s beautifully designed, and it makes fantastic use of sound and ambient music. Even its gameplay ties into its weird Soviet sci-fi themes, subsuming individual achievement into a tale of collaborative struggle and hard-won improvements for the group. In a way, The Tomorrow Children is everything I want it to be.

As a game, though – as something you play and enjoy playing – I’m not always quite so sure that it holds up. 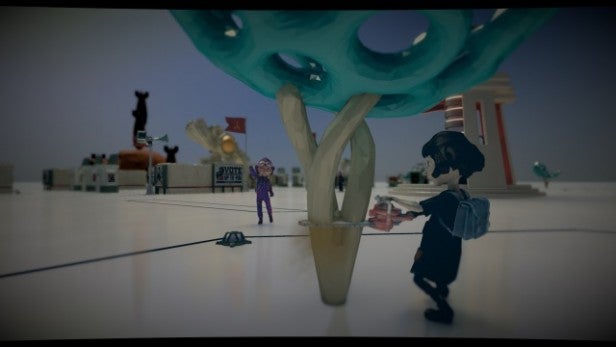 Q-Games’ latest is easily its most ambitious, abandoning the developer’s previous schtick – retro-flavoured 2D games with brilliant hipster twists – for a 3D adventure that owes almost as much to Marxism as to Minecraft, or at least a combination of Soviet propaganda, surrealism, Eastern-European animation and Jungian theory.

Basically, some deranged experiment has all but wiped out humanity and turned the Earth into an empty, white landscape, called The Void. At intervals strangely shaped islands emerge from its surface, each one containing mineable or choppable substances and odd little Matryoshka dolls. These, it turns out, are not dolls at all, but the crystallised essences of human beings, ready to be awakened, unlocked and released back into this brave new world.

Mining and gathering these resources and dolls is just one job for our protagonist, a childlike artificial construct known as a projection clone. By collecting the goodies and bringing them back into a town, you can add to its resources, build new homes and facilities and bring the poor Matryoshka back to life. However, your town also needs defending from the Izvarg – a bunch of Kaiju-style giant lizard beasts and insects that will ravage its buildings without a second thought. By building turrets and arcing Tesla pylons, you can bring them down, or you can even pull out a rocket launcher for some close-range blasting. Do so and they fall and transform into another mineral substance, itself mineable for resources and gear.

It sounds a bit weird and it looks even weirder, with Q-Games using a custom engine and a technique called (deep breath) “cascaded voxel cone ray tracing” to simulate a world that seems hand-crafted from metals and plastics, lit by harsh artificial lighting that bounces crazily off every glossy surface. It’s an incredible effect, working hand in hand with the kind of visual style that used to grace the weird Eastern-European animations that those of us of a certain age might have found in the early evenings on BBC 2, somewhere between Monkey and a Star Trek rerun. Throw in ludicrous amounts of sumptuous bokeh and you’ve really never seen anything like it. 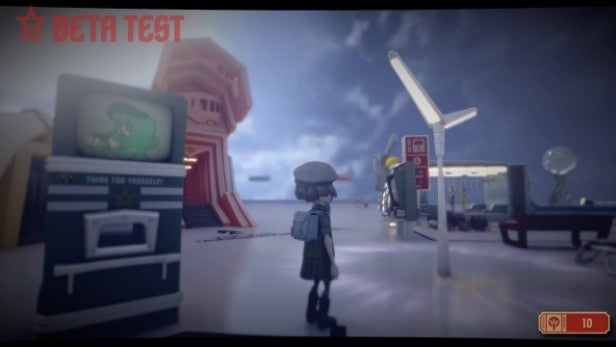 It’s a marvellous thing to behold and – at first – quite marvellous to explore. You can fault The Tomorrow Children for not giving you enough information, but you’ll spend the first few hours working your way around the town and your first islands, learning how to mine and gather resources; how to travel across the Void’s unstable wastelands and transfer resources by bus; how to build new facilities, generate electricity, cash in hard work for tokens, spend tokens on new tools and weaponry and fight the Izvarg and assorted other pests.

There’s fun to be had experimenting with the different tools and weapons, not to mention the vehicles, including sleek rocket cars and jetpacks. The basic mining mechanics work well, and it’s not long before you get in the swing of your shared labour.

There are some amazing spectacles on offer here, as well, with islands resembling giant hogs, faces staring up at falling bombs, scuttling spider Isvarg and towering lizard Izvarg raining destructive spheres of energy on your town. There’s a sinister and enigmatic edge to the proceedings, too, as orders come in through TV screens and the radio from your deeply creepy boss, while the local security forces flog you permits under the counter. They might even arrange black market catalogues, giving you new sources for often better, cheaper gear through a secondary currency, Freeman Dollars. As islands appear and fade out, as Izvarg attack and Mayoral elections come and go, you start to wonder if there’s more going on beneath the surface.

However, the more you play, the less engaging the core gameplay becomes. When it comes down to it, all that digging with shovel and pick-axe isn’t all that enthralling, and the same goes for chainsawing trees, shaking them for weird metallic apples or going through the whole rigmarole of collecting and arranging for delivery at one end, then grabbing and sorting at the other.

Even the combat isn’t that engaging, whether you’re up against the Izvarg or the continually annoying mosquitoes. And while the islands are more interesting, with secret chambers, hidden perils and sneaky layouts, they do begin to blur and it’s not long before you’ll see them repeated, particularly if you use the handy metro system to move from town to town. 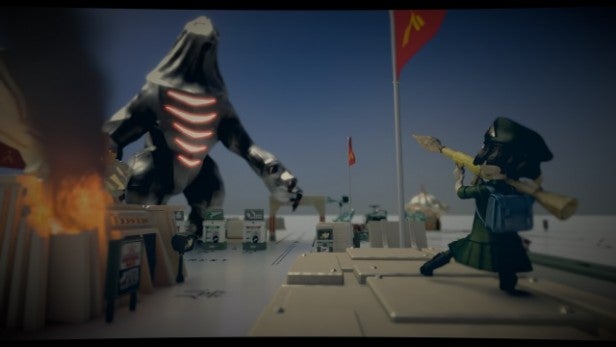 Even your interactions with other players are a little unsatisfying. While you can work together to collect resources or battle the Izvarg, it doesn’t always feel like much of a group effort, and the game never quite creates the desired sense of all the workers pulling together for a common goal. You can build your own residence, change clothes and make your mark through facilities and monuments, but it’s a challenge to feel that much pride or emotion in your town.

What’s more, the game keeps throwing extra tasks at you, bringing in bonus perks and resources, but these often involve travelling to, and collecting something for, another town, which will still look and feel a lot like your town. Even a system of perks and character upgrades can’t seem to keep the action fresh for long.

There’s potential here, and these are early days for a very different and subtly ambitious game. The mix of town building, town defence and mayoral elections, with different mayors altering key parameters, is clearly designed to pull you deeper in, and it might just be that it hasn’t found the player base to bring the world to life. The whole feel may change dramatically in the next few months, as we move from access to those who pay for the Founders Pack to a full free-to-play launch, funded by the use of real-world cash to buy Freeman Dollars, costumes and other goodies.

Right now, though, The Tomorrow Children is a beautiful, intriguing effort that still comes across as missing something – perhaps the sense of community that might one day pull it all together.

The Tomorrow Children is weird, wonderful and oddly hollow, lacking neither the addictive hooks to keep you playing, nor the sense of community to bond you to your town. It’s worth a look for its unique visuals and strange, slightly sinister atmosphere, but don’t be surprised if your interest wanes after the first few hours.