Available on Xbox One, PS4 (version tested), PC
If Deck 13’s last game, Lords of the Fallen, was a love letter to Dark Souls, at least it was a good one, looking gorgeous, playing smoothly and bringing in a little of its own heroic fantasy style. The studio’s follow up, The Surge, continues the Dark Souls obsession but is smart enough to switch genres, moving from fantasy to sci-fi for a gritty futuristic spin. Don’t get me wrong; The Surge is still incredibly derivative of all things Dark Souls, but it’s smart enough to disguise the ideas it’s stealing and throw in the odd new one to spice things up.

The Surge imagines a future where mankind has exhausted the Earth’s resources, and where our only hope is a huge corporation and its ambitious plans to expand off-planet. Your hero, Warren, takes on a new job with the company, volunteering to be fitted with a robotic exosuit for heavy-duty work. Needless to say, neither the job nor the fitting goes to plan, and Warren awakens in the junkyard of a seemingly abandoned desert factory, with hostile drones and deranged, exosuit-clad co-workers everywhere he looks. Can he find out what’s happened, discover who’s to blame and manage to make his way out alive?

Possibly, but he’s going to have to destroy a lot of robots and slaughter an army of mechanically-enhanced maniac colleagues first, which is a challenge in a claptrap exosuit with only makeshift weaponry to wield. 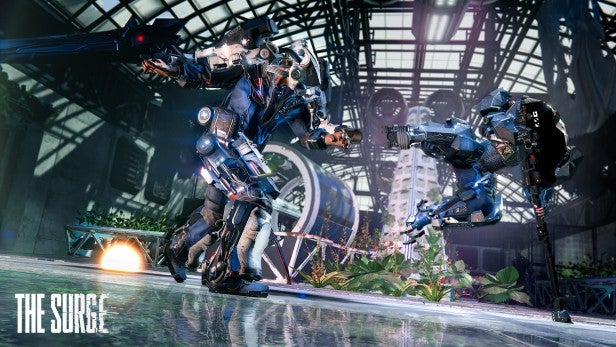 So we’re thrown into a world of sci-fi Dark Souls, where you’ll battle using familiar block and attack controls on the shoulder buttons, tapping X/A to evade and hitting circle/B to quickly drain a potion. Bonfires become Operations Centres, where you’ll revive every time you’re slain, while souls are now chunks of scrap which can be used to level up your suit’s power core or build upgrades. When you die your current scrap falls to the ground, where you can reclaim it if you’re fast enough. However, when you’re revived all your foes are revived too, making getting your scrap back far from a no-brainer. Sounds familiar? Well if you’ve played any Souls game, it should.

However, The Surge does sneak in a few non-standard concepts. For a start, you can’t just pick up enemy weapons; they have to be separated from their exo-suits by force. Ditto armour, where you need to get hold of components and schematics, by separating the various arms and legs from (you guessed it) the enemy exo-suits by force. To help, you can target not just the enemy, but an individual arm or leg, head or body. What’s more, The Surge adds to the usual health and stamina gauges with one for energy. Build up enough of the stuff, press a button when prompted and you’ll pull off a vicious finishing move on your enemy, often severing the body part you’re after in one nice, clean blow.

And that’s how The Surge’s own brutal cycle of addiction grows, where you’re constantly building and upgrading parts and weapons so you can do a better job of demolishing bloodthirsty co-workers and robots so you can harvest them for crucial schematics and components, so you can upgrade your parts and weapons and, well, you get the picture. It’s horribly violent and horribly compulsive, enhancing a combat system that’s tight, melee focused and combo-driven, where – in true Dark Souls style – every exosuit variant and every weapon has its own distinctive weight, pace and feel. On top of this a system of implants allows a further level of customisation, so you can amp your offensive powers, health or energy or, effectively, up your ‘potion’ count instead. 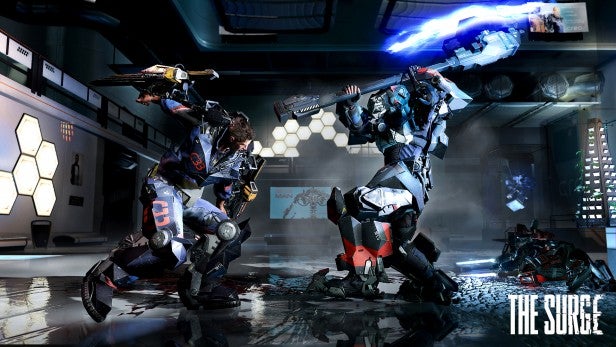 The Surge can’t match Dark Souls for eerie atmosphere or Bloodborne for gothic horror – there are faint-hearted attempts to push for a creepy, cult-fearing Dead Space vibe, but nothing much really comes of it. That doesn’t mean, though, that it hasn’t got the kind of nerve-wracking tension you’ll find in From Software’s classics – the desire to explore a little further balanced by the fear that you’ll lose what you’ve already got. It’s also full of the excitement you get from tough, high-stakes combat where only your skill and your ability to read your foe stands between you and another embarrassing demise.

You will die. In fact, you’ll die an awful lot. Yet, as in the Souls games and Team Ninja’s Nioh, you rarely feel that the death’s unfair, but that you lacked skill, weren’t paying attention or blundered into a foe you were fundamentally unprepared for. Here, as there, the secret is to keep improving, try to play smarter and grind a little where you can to beef yourself up.

In fact, in some ways, The Surge is more forgiving, allowing you to bank scrap as well as spend it and having your enemies drop the occasional handy scrap pile which remains in your inventory on death. To balance this, you have a nasty three-minute time limit for regaining your loot when you revive, which doesn’t half make you focus on whether to go after it or just write it off as a disaster. 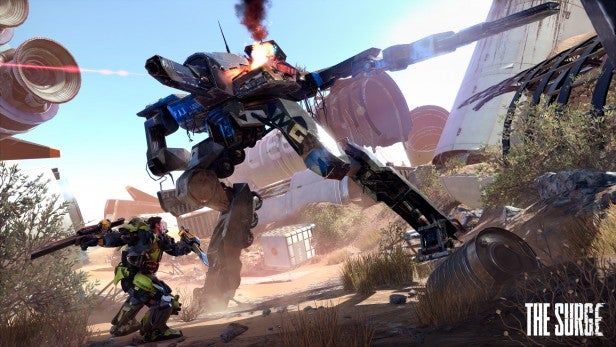 There’s plenty to like about The Surge. Its core mechanics are smart and well designed, it’s horrendously addictive and I think the difficulty level is just about right. Even the boss battles – my biggest gripe with Nioh – seem reasonable. The bosses are tough but you can beat them with a modicum of skill, and they don’t take an epic effort to grind down.

Yet it’s not all good news. In many respects The Surge is a good-looking game with slick visuals, lashings of detail, great use of lighting and some cool atmospheric effects. I’m not sure I’ll ever get bored of those slow-motion, dismembering finishing moves. Yet there’s something a bit generic about its gritty industrial sci-fi art style, its shambling man-mechs and its scenery. It’s distinctive because of its unusual sci-fi setting, but that setting isn’t distinctive in and of itself.

This also causes problems with the level design. Deck 13 has crafted some huge labyrinthine but logical spaces, crammed with shortcuts to discover and hidden routes to unlock, but the combination of that slightly repetitive art style and some poor signposting can make it hard to work out where you’re meant to be going, let alone what you’re meant to do when you get there. In Nioh I once spent two hours trying to beat a boss. In The Surge I spent two hours trying to find a boss. I can’t say I enjoyed either all that much. 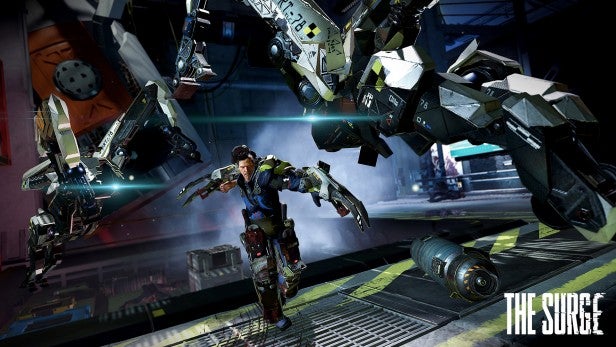 Even the storytelling – deliberately ambient – can feel vague and unsatisfactory. It’s hard to invest in the unfolding plot, let alone the hero and the various side characters he rescues or runs up against. At times, as when security guards are urging you to get back to work when clearly the whole installation has collapsed, it doesn’t seem to make much sense at all. Meanwhile, a system of drone companions with upgradable abilities seems underthought and underexplored, to the extent that, at one point, I’d forgotten it was there. And did we have to have the same alt-country song playing in the Ops Centre every time we visit? By the seventh or eighth hour of play it was driving me potty.

I’m happy to live with all these things because I love the combat, the exploration, the upgrade cycle and the feeling you get when you defeat a boss or grab a new weapon that makes you feel like the ultimate ‘bot-busting badass. I love the sense that you’re transforming yourself, piece by piece, into a walking, weapon-swinging tank. All the same, that only goes to show how some of the themes of lost humanity fall flat, and how far The Surge lags behind the Souls games in creating a coherent and compelling world. It’s a fine Souls clone in sci-fi clothing, but Deck 13 hasn’t matched the masters yet.

Verdict
Like Lords of the Fallen, The Surge is another rock-solid souls-a-like, losing a little of its predecessor’s strong storytelling and atmosphere, but gaining from the change from fantasy to sci-fi and the ingenious mech smashing and harvesting upgrade system. It’s not quite on the same level as the Dark Souls trilogy, Bloodborne or Nioh, but that’s more down to the lore and art style than the brilliant gameplay. If you like the sound of a gritty dystopian take on Dark Souls, The Surge is an easy game to recommend.