Journey to Batuu is an enjoyable new game pack for The Sims 4 and a worthwhile glimpse into the Star Wars universe, but it sadly lacks ambition when it comes to doing something new with the property. At times, it feels like a glorified tourist attraction, and the lukewarm narrative doesn't pull you in enough to feel worthwhile. But for hardcore fans, this is definitely a journey worth taking for the price.

Ever since it picked up the Star Wars license, it was only a matter of time until Electronic Arts worked the iconic sci-fi franchise into some of its biggest properties, and The Sims 4 is arguably the perfect candidate. Its core experience is defined by player choice, giving them the tools to explore their virtual lives with charmingly goofy consequences.

Translating this into the world of Star Wars could have led to some delightful scenarios, but Journey to Batuu often comes across as a glorified tourist attraction instead of the bold expansion to the classic formula it could have been. Fans of the franchise will still adore much of what is on offer here, but those hoping for a more comprehensive exploration of Disney’s universe could feel dissapointed. 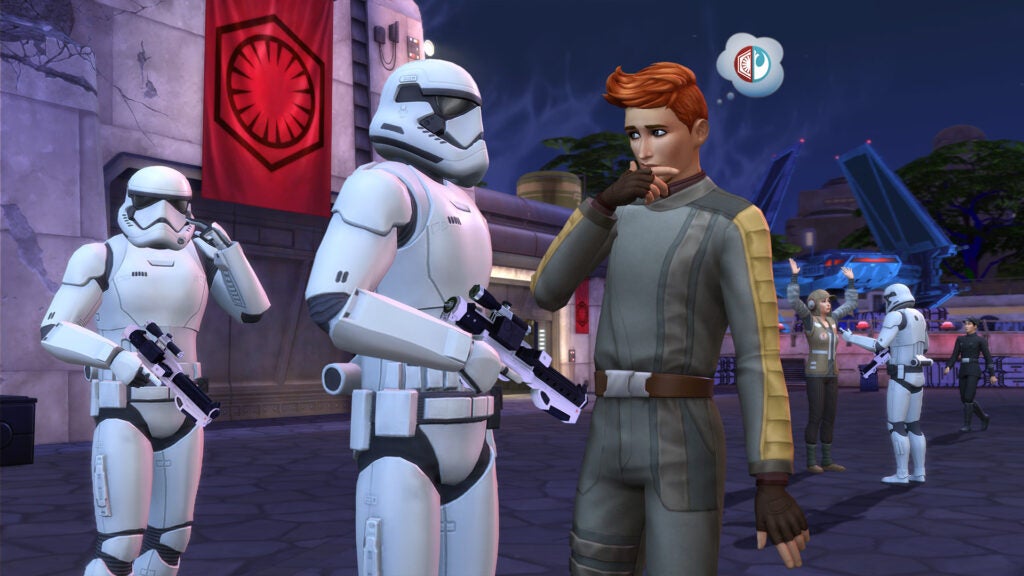 While it might be lacking in mechanics and depth, Journey to Batuu is an undoubtedly gorgeous and faithful exploration of the sci-fi universe. Based on Galaxy’s Edge, the theme park of the same name, the expansion pack will have you exploring three distinct neighbourhoods as you take on missions, earn new items and simply spend time thrusting your avatar into awkwardly precious situations.

You’ll begin in the Black Spire Outpost’s Oga’s Cantina, an establishment where aliens from around the galaxy gather to gamble, barter and drink their collective sorrows away. I had a blast simply sitting by the bar ordering a few drinks and watching as my character conversed with her fellow patrons without a care in the world. Language has been given a fun Star Wars-esque tinge, so it’s the same old gibberish with a lovable new twist.

From here you’ll journey to Resistance Camps and First Order Outposts while completing new missions and objectives, with much of the expansion pack’s progression being tied to missions instead of giving you freedom to experiment with it on your own terms. Immersing yourself in the universe outside of the narrative is playful fun, yet you’ll want to earn currency and meet major characters like Kylo Ren and Rey instead of sitting around like a Gonk droid. 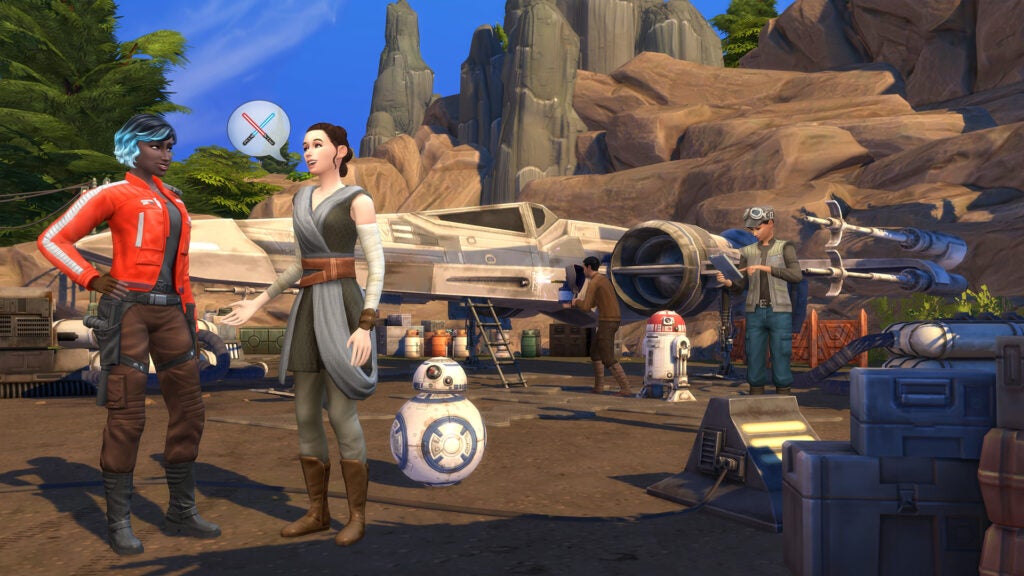 Missions will have you performing tasks for Journey to Batuu’s three factions: The Resistance, First Order and Scoundrels. Tasks you need to perform are fairly simplistic, and will oftentimes reward you with currency and other cool unlockables relevant to the Star Wars universe.

As I mentioned earlier, questlines will also lead you to meeting iconic characters from the films, which is a cool bonus even if they seldom pop up in the environments of their own accord. The story-driven nature of the expansion has good intentions and seeks to draw you into the wider universe, but I feel The Sims 4 isn’t built for a linear, self-contained adventure like this, at least not in a way that feels hugely satisfying to play.

Previous expansions have explored missions and objectives to complete, but they were integrated into the wider sandbox philosophy that makes the game so enjoyable to play. Here, you’re whisked away to a fantastical land until you decide to return home with all of your new spoils in tow. You could be cynical and consider it little more than a glorified advertisement for Galaxy’s Edge, but that’s selling it short.

Exploring Star Wars as an average citizen does have its appeal. The franchise almost always follows heroes of galactic proportions as they seek to overthrow evil empires, while here you’re just a random fellow who happens to be performing some tasks for the world’s many organisations. Learning about the people who exist in this world and what makes them tick is an eccentric distraction, it’s just a shame so much of it feels artificial. 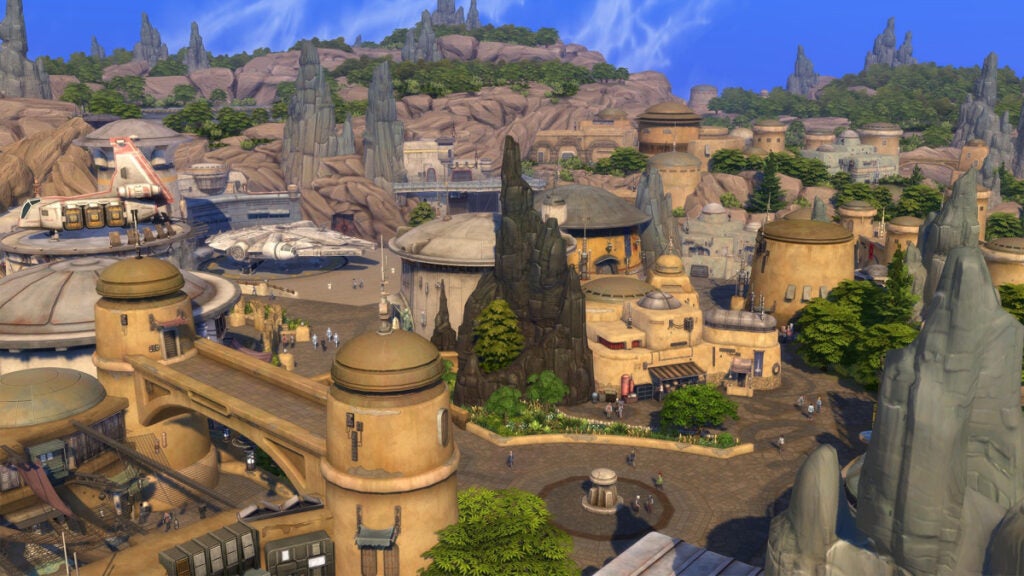 Progression isn’t fruitless though, and there’s plenty of fanservice to be had for those who love drinking blue milk and partaking in lightsaber duels. You can craft your own saber to fight with other characters, and even build your own droid to accompany you while exploring each location. These are welcome additions which help make this expansion feel alive, even if it only serves to bolster the overall aesthetic instead of providing any real substance.

Furniture and items you earn throughout Journey to Batuu can be taken back to your neighbourhood in the base game, which provides incentive to see everything through to the end, but will likely only appeal to hardcore fans who truly want to mine everything there is to offer. I didn’t have much of a reason to keep going once clearing all of the main missions, beyond trying a few absurd things with the locals.

You can eventually climb the ranks of different factions by partaking in story quests, which is motivation enough to explore beyond the three major locations, but it’s up to you whether all this effort is worth it to see a handful of iconic characters bark out a few words in Simlish. Sadly there isn’t any way to ‘Woohoo’ Kylo Ren, but there’s always mods for that sort of galactic fantasy.

Journey to Batuu is an enjoyable game pack for The Sims 4 and a worthwhile glimpse into the Star Wars universe, but it sadly lacks ambition when it comes to doing something new with the property. At times, it feels like a glorified tourist attraction, and the lukewarm narrative doesn’t pull you in enough to feel worthwhile. But for hardcore fans, this is possibly a journey worth taking for the price.