Available on PC and Mac (reviewed)
There’s a lot riding on The Sims 4 Get To Work. The Sims 4 itself had a fairly lukewarm reception at launch and as the first full expansion pack for the game, long-time players will want to get some serious gameplay for their circa £30 investment with Get to Work.

Sims 4 Get to Work allows you to follow your Sims to work for the first time thanks to three brand new playable career paths – Doctor, Detective and Scientist. If you so choose, you can follow your Sim to their place of work (three special new otherwise inaccessible neighbourhood lots) or just let them toddle off on their own if you want to play around with your other Sims.
But of course, the main appeal is to explore these new careers, which all have ten levels and various unique features that will no doubt appeal to long-time Sims fans.

The main appeal of the Doctor career is the ability to deliver your Sim neighbours’ babies. To begin with, you’ll be just a medical assistant, but if you work hard and get your head into some medical journals you’ll quickly get promoted. 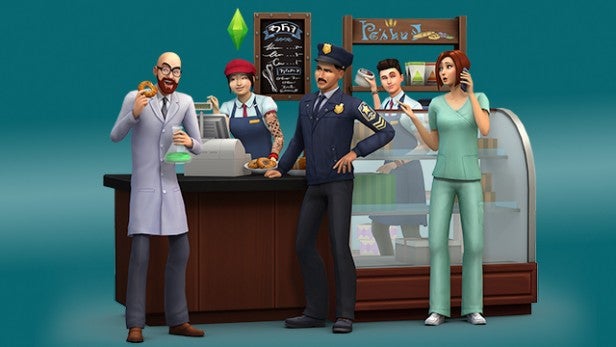 Like all the new Get to Work careers, you’ll need to work to fill up your progress bar in the top right corner in order to get the best appraisal at the end of the day. To do this, you have to complete the tasks that pop up underneath it. You can choose which ones you want to carry out, but if you want to get promoted, you’ll need to focus on those challenges.

For the Doctor track they can include diagnosing patients, studying medical journals or taking DNA samples. They tend to get more varied as your pay grade increases, making you want to work a lot harder to progress through the lower ranking job titles.

To begin with, part of your job will just be ferrying patients from the reception desk to the treatment areas. But as you progress you’ll start to work out how to treat your fellow Sims and all their weird and wonderful illnesses. As you rank up, those diagnoses will take more and more work, including getting patients’ heart rates pumping, giving them top-to-toe scans and even making house calls.

Part of the appeal of the Doctor career is discovering the comedic diseases the developers over at Maxis have created – recognising when someone has Llama flu for example. 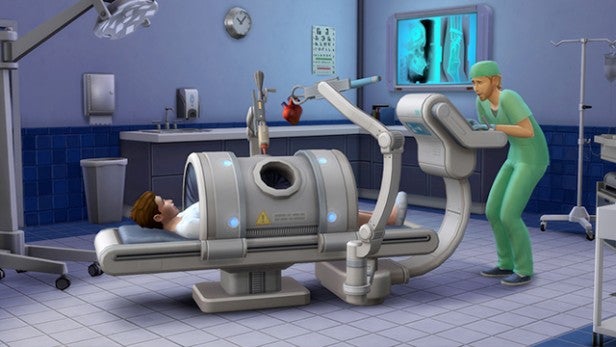 By the time you get to level 6 (which takes a few in-game weeks even if you ace every day on the job) you’ll be a General Practitioner and be able to deliver babies. Full term pregnant female (and male alien-impregnated sims too) will start waddling up to your hospital’s front desk and you’ll need to take them through to the special machine that delivers the screaming infants – Sims style.

You’ll also unlock some unique social interactions as you get higher up the Doctor rank, including the rather cheesy “Check for Fever” flirting technique, but also the ability to predict the sex of unborn children.

If we can say one thing about the Doctor track is that it probably the most jovial of the three new interactive careers. There’s plenty to keep your day so busy that we ended up working an extra hour most days just to make sure that we were getting the maximum career points – and money too.

But we have to say that the new Scientist career track is definitely our favourite of the three. Inventing, contacting aliens, using the various gadgets and gizmos as well as testing out potions and other potentially dangerous substances means there’s always something for your Scientist Sim to get involved in. 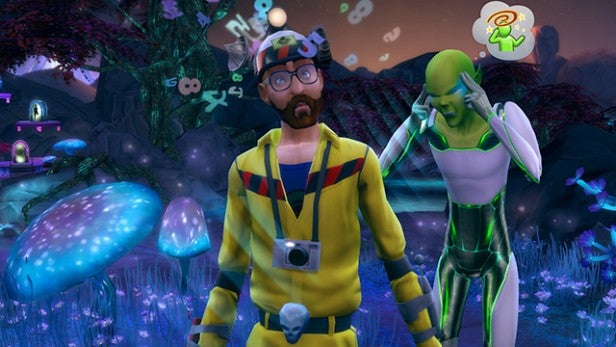 Your inventing days start as soon as you hit level 3 in the Scientist Career with the hilarious Simray – or whatever you decide to call it. A lot of your time will be spent brainstorming or interacting with the Invention Constructor, which is a friendly robot capable of helping you construct all sorts of crazy inventions.

The Simray is probably the most versatile of all the inventions you make, at least at first. Initially you’ll only be able to freeze your co-workers and other Sims outside the office. But, as you progress through the ranks you’ll be able to upgrade it to include mind-control, allowing you to force your friends to do things like clean your house for you. Yes, there’s a slight evilness to the Simray, but you can also upgrade your belongings to a better version with the transform feature too.

Your day-to-day tasks for the Science career will include creating serums that can change your Sim’s emotions, or any willing subject you choose to share your potions with. The Rose Serum, for example, will make your Sim flirty, while the Red Hot Serum will literally make your Sim see red. 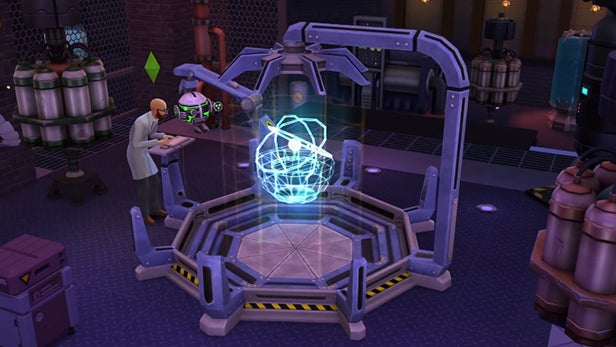 But, like the Doctor track, there is a kind of end goal with the Scientist career and that is contacting the aliens. Now, you can get in contact and even get abducted before level 9, but it all gets a little more serious when you unlock the ability to invent the ElectroFlux Wormhole Generator.

This handy little machine lets you visit Sixam, the alien world of The Sims 4. Either that or max out your Rocket Science skill and adding the Wormhole Generator to your rocket.

There’s so much to do in both the Doctor and the Scientist tracks that it’s near impossible to detail all the minutiae here, but suffice to say that you’ll be a busy bee. 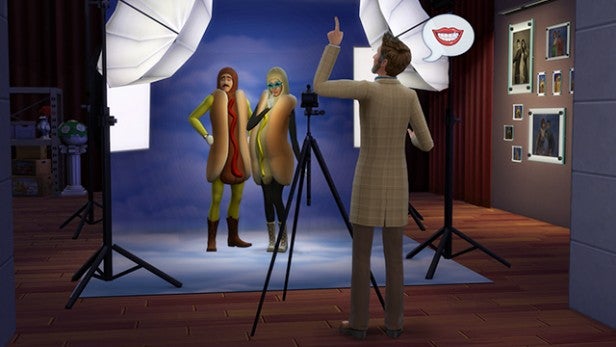 We love the fact that being a Scientist, or at least having one in your family is the only way to get to Sixam. If that’s not a huge reason to choose the Scientist track, we don’t know what is.

However, in the Science Lab it can be a little tricky to work out which items you are supposed to interact with. At one point we were asked to work on the rocket for 10 minutes, but at that stage the rocket was in pieces in boxes. There was no indication as to where the rocket was hidden. We also advise that the microscope doesn’t look at all like a microscope. In fact it looks much more like a massive gun, so be prepared for that.

In comparison, the Detective Career track is definitely the most limited of the three interactive jobs. It lacks a real goal to work towards or long-term appeal aside from it being like you’re in an American cop drama.

As much as we adore CSI, the Detective career is just far too repetitive. For the first five or so levels, once you’ve worked out how to get a case, build a crime map and investigate a scene it all gets a little too monotonous. All the crime scenes bear so much resemblance to each other with their gnome theme, broken appliances and sad looking victims you wonder why you bothered.

It does get a little more interesting when you get the ability to unearth hidden clues at a crimescene, but it’s still a very similar process. Our highlight was learning how to interrogate suspects once we’d actually arrested them – working out when to play good cop and when to go in hard. 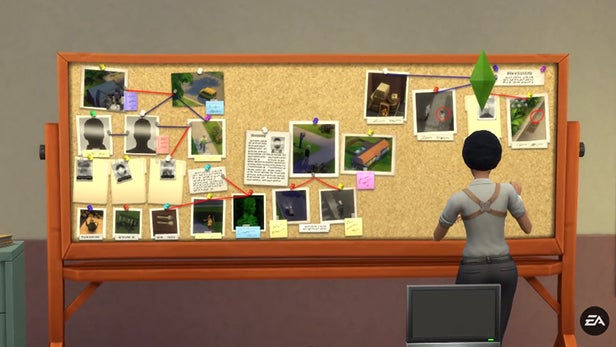 What we will say is that it benefits you to be thorough with your crime map. Gathering only a few basic details on your suspect will mean you can’t make an arrest properly and arresting the wrong person will seriously impact your performance.

The final strand to the Get to Work is the retail businesses. If you don’t fancy one of the new careers, your Sims can now create their own shop, selling whatever their hearts desire. We started our own little bakery thanks to the new Baking skill tree introduced with Get to Work. With a few days spent reading baking books and experimenting with icing, we soon had the talent that we felt would hold up to selling a cupcake or two. 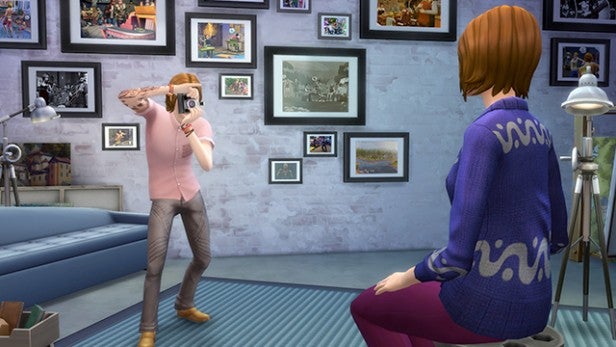 If you want to buy one of the new Magnolia Promenade custom built lots you’ll need at least 40,000 simoleans. This is no place for a startup, or for those who don’t like to use the many Sims 4 cheats (cheats were actually disabled in our review build so we had to earn money the old-fashioned way).

You can of course free build your own store so that it looks exactly how you want it.

Retail units require you to be very on the ball. If you don’t interact with a customer you’ll lose that potential sale. Do this too many times and you’ll soon be in the red.

We haven’t spent quite as much time on the retail side of Get to Work as we would like, so look out for an update to this review in a few days.

Verdict
Although we feel the Detective path is the weakest point of the new careers, there’s still plenty to do in Get to Work that may justify that £29.99 investment. We love the fact we can follow our Sim to work now and explore the professional side of a life simulator – or as much as The Sims allows anyway. The retail businesses are an interesting addition, but we feel they won’t prove as popular as the career paths.