It’s a sad fact that most critics have a love/hate relationship with the public at large. You can see it every time a band like Coldplay releases an album and the critics sulk that people who aren’t really music fans are picking it up when they do their weekly shop at Tesco. You can see it every time some broadsheet film critic goes to see something like Transformers. The critic can’t help wishing the crowds would go and see or buy something more worthy, but at the same time they know that whatever they say isn’t going to make a damn bit of difference. 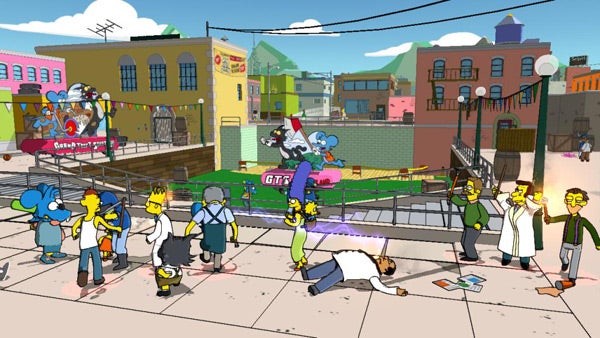 You can see the same thing when games reviewers look at a game like this one. We know it’s going to sell millions, and many of those to people who buy two or three games a year at the most. Those people could be out buying The Orange Box or Metroid Prime 3 or Legend of Zelda: The Phantom Hourglass. Or they could or saving their pennies for Super Mario Galaxy or Ratchet and Clank: Tools of Destruction. Instead they buy The Simpsons Game because they know the name and they know the characters. Twisting the knife for us is the fact that it comes from EA; a company known for producing licensed games with high-production values, but occasionally with little regard for originality, quality or the original source material. Frankly, the fact that The Simpsons Game is selling huge numbers at this moment should make me want to vent my spleen all over this page. Trust me, it wouldn’t be pretty.


However, this time it doesn’t, and I won’t. Yes, The Simpsons Game has some really horrible flaws, and I can’t say that it’s consistently great throughout. It is a game where you can see the missed opportunities, and where it sometimes tries to be too clever for its own good. On the other hand, I have to admit I’ve enjoyed it. In fact, I’ve loved big chunks of it. I suspect that if you love the show, you might have the same reaction. 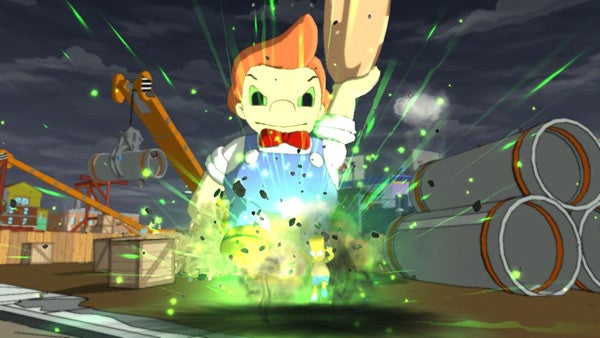 OK, so it’s fundamentally a 3D platform adventure game – the weakest and most obvious choice for any licensed property with family appeal. You’ll be playing as all four speaking members of the Simpsons family, and Springfield itself provides a free-roaming environment through which to wander and collect bonus items. Disappointingly, however, this is little more than a framework for a selection of themed and rather linear levels. In these, you can only play as one of two family members, switching between them at will in order to solve puzzles or use particular abilities.

The platforming isn’t particularly challenging, the solutions to the puzzles are handed to you on a plate (curse you, in-game hint bubbles) and you can’t help wishing that someone had looked at the way the city is handled in Crackdown – as an open-world playground where collecting bonuses brings real game benefits – and applied that to Springfield. You can’t help feeling that a lot of the work gone in building the city and its more notorious locations will probably go to waste. And while you’re wishing, you might also wish for a less badly behaved camera, and for it to be easier to trigger certain actions when you’re only just out of the right zone. Lesser stuff than this has brought big games down before. 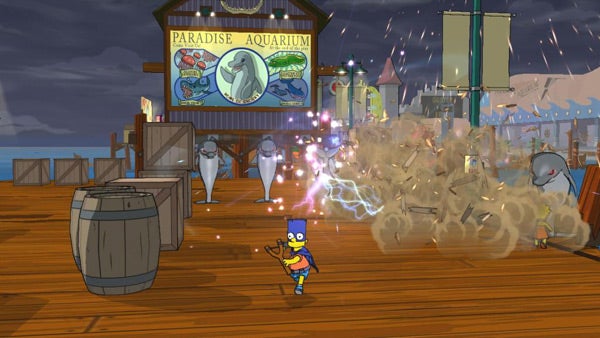 But The Simpsons keeps on earning itself a break just by playing so close to the look, feel and attitude of the series. We’ve had enough lazy rip-offs where the characters and an approximation of the visual style are taped onto an existing game design. Here, the graphics are an uncanny replication of the cartoon style. The Simpsons Game resembles a moving flat cartoon with the series trademark basic linework and rudimentary shading, even though it’s fully rendered in 3D. The characters look right, and with the voices from the show, sound spot-on as well. Best of all, they’re written right. You’re not getting a selection of catch-phrases thrown at you willy-nilly, you’re getting the sort of smart, knowing dialogue you’d expect to hear from your TV screen, and deployed with a certain degree of wit. If you know and love the series – and who doesn’t – you can’t help but be impressed by how well it’s all been put together. 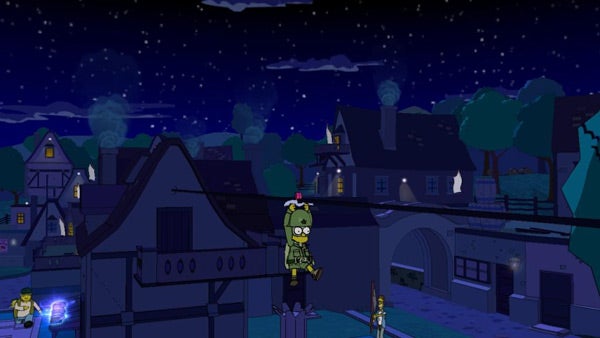 And The Simpsons Game goes one better because it comes from a team that also clearly knows and loves video games. In fact, video games are the subject of the satire and the inspiration for many of the levels. We get sections inspired by Medal of Honor, Shadow of the Colossus, fantasy RPGs and classic platform games. We have levels in which Marge tries to ban and then clean-up a controversial game called Grand Theft Scratchy – no prizes for guessing the subject there. Gameplay is regularly interrupted by the over-egged cynicism of the legendary comic-store guy, alerting you to video game clichés that the designers have lazily employed.

At one point in the game, Bart and Lisa grab a game guide so that they can learn new power-ups before they’re supposed to. The game even features a special guest villain from EA’s own top ranks. Not all the humour works, and there are times when making fun of a silly and artificial game mechanic doesn’t exactly excuse you from using it yourself, but some of this stuff is a treat. Just as you can’t help loving The Simpsons when it’s right on the money with a spoof of a classic film or current hit TV show, so you can’t help loving the game when it prods and pokes mischief at some of gaming’s silliest foundations. 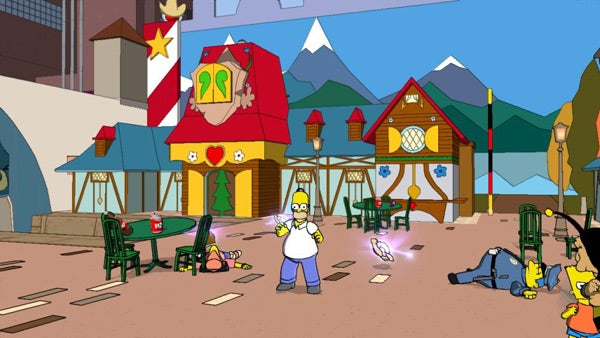 Nor is it fair to label the gameplay as predictable or unimaginative. The key factor is that each member of the family has their own specific capabilities. Bart, in the form of Bartman, has the acrobatic powers of the classic platform hero. Lisa can stun attackers with her saxaphone, and – through meditation at specific shrines – move large objects, flick foes out of the way and, later on, zap them with lightning. Homer can transform into a giant blubber-ball and roll or burst through barriers, or inflate himself with gas and float from place to place. Marge, meanwhile, can use a megaphone to convert bystanders to her latest cause, then unleash them – in the style of Pikimin or Overlord – on obstacles human or physical in her way. While what power to use where is heavily telegraphed, and often too much so, this still lends the game a lot of variety. Some levels are heavy on platform skills or even fighting and shooting, but others are more about cooperation between characters or – in Marge’s case – recruiting and commanding mobs. And even if your main missions don’t need you to think that much, collecting all the bonus items – a task you’ll need to return to levels to succeed in – will do. In other words, there’s a little more range and depth here than you might expect. 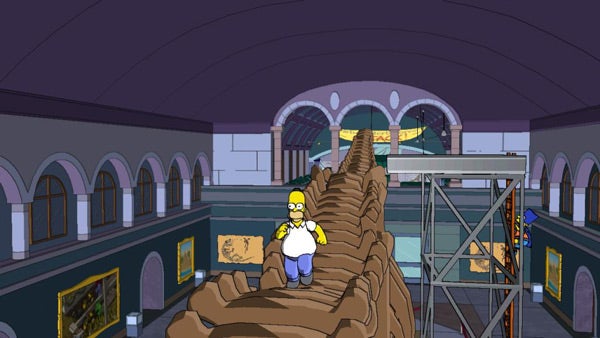 Again, there are times when the whole thing fails to pull together. The Shadow of the Colossus parody is a nice idea, but the means of destroying this particular monster are too fiddly for the level’s own good. It drags on a long time past its welcome. One alien invasion level is similarly afflicted by a poorly judged difficulty level, while the fantasy RPG section – dig Homer’s Zelda-inspired costume while you can – turns out to be a lot less entertaining than you might have hoped.

However, even when these bits are getting you down, The Simpsons Game can always fall back on its humour. The game is consistently pretty funny, and sporadically brilliantly so. The Medal of Homer level, which kicks off with what’s actually a fairly plain collect-a-thon, is raised to another level by its cheerful mockery of the surrender-ready tendencies of the French. Alien invaders pause to ponder relationships or issue poorly thought-out threats. Marge’s self-righteous mission to ban Grand Theft Scratchy from Springfield shops ends with a hilariously cutting pay-off, and the level based in the controversial game itself is pretty pointed about the skewed morality of the whole urban gangster genre. The Simpsons Game has made me laugh much, much more than it has made me groan with frustration and annoyance. It’s also kept me interested as to what game or what genre it’s going to have a run at next. I don’t know about you, but I can live with a few poor camera angles if I’m having that much fun. 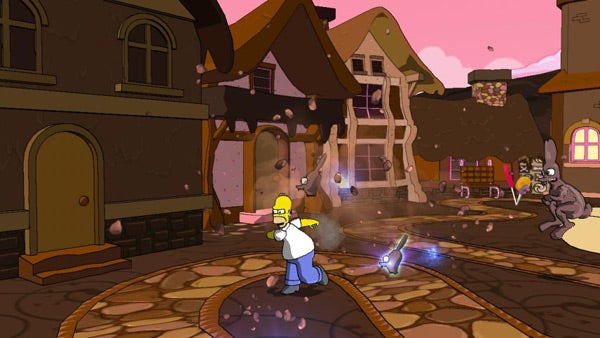 The tricky thing is that the humour is going to be a matter of opinion. I might think the hit rate is high, you might sit stoney-faced throughout, in which case the actual gameplay is probably going to get on your nerves. My feeling is that most people will have the same reaction I did, but beware: your mileage may vary. Still, maybe this time the public at large hasn’t made such a disastrous mistake after all. The Simpsons Game does a fine job of capturing the look and the spirit of the show, and for all its flaws it’s an entertaining ride. I wouldn’t myself buy it in preference to, say, Metroid Prime 3: Corruption or the upcoming Ratchet and Clank, but if you love the show you won’t regret giving it a spin. 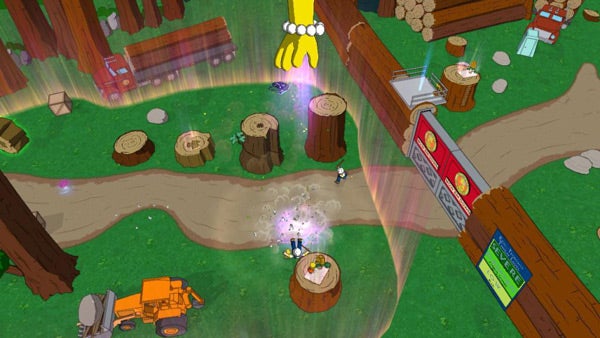 
A game with a few gaping flaws, but with enough of The Simpsons wit and intelligence to mask them pretty well. Smartly written and laugh out loud funny, it’s a title that fans of games and fans of the show should enjoy.