Love it or hate it, Valve’s deployment system “Steam” has been a huge success, despite its shaky start. For those of you that haven’t used it, everyone has a unique Steam account that is free to register. From then on in, any game you own, either purchased in a shop or through Steam itself is locked to that username. It never forgets what game you own. Steam itself is a small download, which you can install on as many machines as you like – but you can only be logged in to one at a time.


After logging in, any game that you own is then downloadable and can be run from those machines. For instance, as I tend to play Counter-Strike:Source occasionally, this will generally be installed on all three machines, but I might only have Half-Life 2 installed at home where I have a faster machine. If you happen to have wiped your hard drive, instead of needing a backup or hunting out several DVDs to reinstall, just click the games you want to reinstall and let it do its thing. I’ll take a while, but it’s damned convenient. This is also an excellent way of making sure your games are always up to date, as many users don’t even think about updating their games or drivers. Steam has been so popular that many third-party games developers have decided to use Steam for deployment, as a way of reducing cost – both to them and the end user. 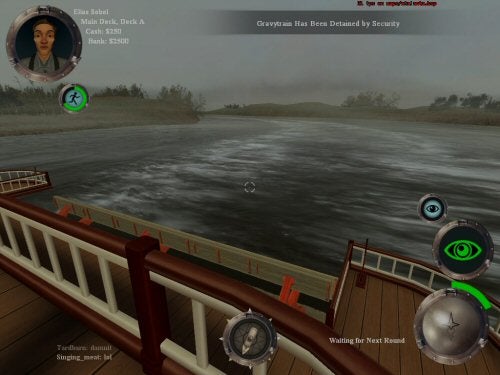 Annoyingly for us, and lucratively for Valve, as new games come out, it constantly reminds you of its existence and even gives you the option to pre-load the game. This means that when it is finally available, the data can be unlocked and you are ready to go. One such game is The Ship. At the minor sum of $19.99, this is cheap enough that many people will just give in to the advertising and buy it. I’d like to say I was one of those people, but I’m lucky enough to have a “special” Steam account that allows me access to every game. So instead, I just had to bide my time until it was available – which don’t get me wrong was an equally annoying issue to deal with.


The Ship is not new. It was originally a mod for Half Life 1, which much like Counter-Strike, eventually found its way to the Source engine. This naturally means the graphics are pretty good. There are no real physics involved, but HDR effects are employed. The X850XT powered machine I was using (which happens to be my office machine) coped fine, excluding the minor issues I initially had (probably due to the rather old install of Windows). Just like Counter-Strike, it’ll run on anything, it’s just a case of how low you want your details to be.


The Ship is a multiplayer game, based on a series of luxurious cruise ships from the early 1900’s, owned by a mysterious “Mr X”. The décor and clothing wouldn’t look out of place on the set of Titanic, and it makes quite a change from camo trousers and balaclavas.


Although you can play in arcade mode, with bots for entertainment, the AI is pretty poor and feels like a bit of a last minute addition to the retail game. Anyone who has just paid for this game is going to want to play it online with real people.


The game itself is actually quite complex and it will take an hour or so before you really get to grips with it. Of all the people on the ship, one of these is your “Quarry” – the person you are targeting to kill. At the same time, you are someone else’s target. Kill or be killed? Quite, but your Quarry is not the same person who is hunting you – so even if you manage to take care of business, you are still in danger, and you have no idea who it is.

When the game starts, you have no weapon. But there are several weapons dotted around the ship and there’s a small amount of time before the Quarries are dished out, so you can find one. The better you know the map, the quicker you’ll be able to get a weapon. There are fire axes in very obvious places – but the score for killing with one of these is lowest. Generally, the blunter the weapon, the more points are available. Weapons vary from golf glubs, rolling pins and pool cues, to revolvers, scalpels and syringes. Just like the clothing, it makes quite a change from M4s and BFGs.

So, now you have a weapon – how do you go about killing your Quarry? Eye witness reports get back to you with their last location (thanks to Mr X) – both deck and room. A quick look at the map and you’ll be well on your way to finding them. You then need to identify them, by walking up to various people and clicking on them to reveal their name. Getting close to them, you’ll either let your hunter who you are, find a complete stranger or discover your Quarry. Equally, you could be letting your Quarry know that you know who they are.

Then it’s just a case of pulling out your hammer and bludgeoning them in to a bloody mess on the floor, no? No. Darted around the ship are several security guards and security cameras. Try and kill someone, or even have a weapon out while being watched and you’ll be instantly arrested. Depending on what or how many weapons you are carrying determines the length of your punishment in seconds. You are then in prison for this much time while the rest of the game carries on. This is often a good time to take care of your “needs“.


Much like “The Sims”, your character has needs – hunger, thirst, sleep, conversation, enjoyment etc. If you don’t take care of these, bad things happen. You might go crazy, you might die or you might just soil yourself. So, pretty much like real life then. This can be rather irritating to deal with, but you very quickly find ways of dealing with needs as you are wandering around the ships. Wander in to restricted areas and you are likely to be fined, or possibly put in prison. These areas are often worth a gander though – as this is where the highest scoring weapons are kept. 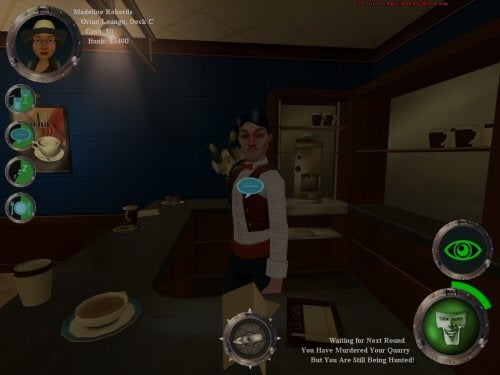 There is a considerable amount of strategy involved in the game – like luring your Quarry in to a quiet corner where no-one is watching, or staying in well-watched areas so you can’t be hunted down. Be aware though, that you can bribe security for a small amount of time, so even the protected areas aren’t always safe. If you’re trying to put off your hunter, you can even put on different clothing, or an eye patch to try and put him off.


As with any game, there will always be someone out there trying to spoil the party. If you kill someone that is not your Quarry or Hunter, then you lose money and get a negative score. Some severs will kick anyone with a particularly bad negative score. If that doesn’t work, a string of prison sentences might stop them from doing so. This is a thinking man’s game, and from my experience on the servers, it’s populated by more mature people. It won’t ever be as popular as Counter-Strike, but that’s a good thing as there are a lot of complete idiots playing that old classic. Such people probably won’t have the patience to play this game and will return to venting their frustration in a nonsensical manner on IRC channels.


There are several modes of game play (deathmatch, last standing), but the one I have described is by far the most fun, and is what most servers are running. If this all sounds like fun to you, then give it a go. Don’t be put off by the learning curve, as it might take a while before you start having fun, but stick at it and you’ll realise that it was worth it.