There’s a moment very early on in The Room 3 where you’ll flinch, or you’ll jump, or at the very least you’ll feel just a little bit uncomfortable. Sat on a train moments after start up rolling through the kind of countryside last realised during Harry Potter’s first trip to Hogwarts, your empty carriage suddenly steams into a tunnel. The screen initially goes completely black before lights then break through the windows, revealing, albeit briefly, a menacing old woman sat directly opposite you. The tunnel ends and, just as suddenly, you’re alone once again.

The old woman’s reveal is so succinct that she’s almost too fleeting to make out, but it’s a moment that’s enough to set the tone for the rest of the game that follows. If for some reason The Room 3 is the first toe you’ve dipped into the franchise and you have absolutely no idea what to expect, the old lady’s appearance manages to indicate that this a series packed with mystery, laced with a little bit of horror, and built around the very concept of just what a puzzle is. Played with headphones and in a darkened room, mobile games don’t get much more atmospheric than this. The big question is, however, does that epic atmosphere fully fuse with the puzzles themselves?

Unlike its predecessors, The Room 3 makes time to stretch its legs. While boxes that were traditionally the series’ signature still feature prominently, puzzles are now spread out across multiple rooms in multiple different locations, and they’re not all tied to a series of cubes, either. The principles of tapping, swiping and sliding your way through their physical and mental challenges nevertheless remains the same, and when it comes to brain teasers, The Room 3 holds up it predecessors’ tradition of finding the balance between foxing you and letting you breeze through. 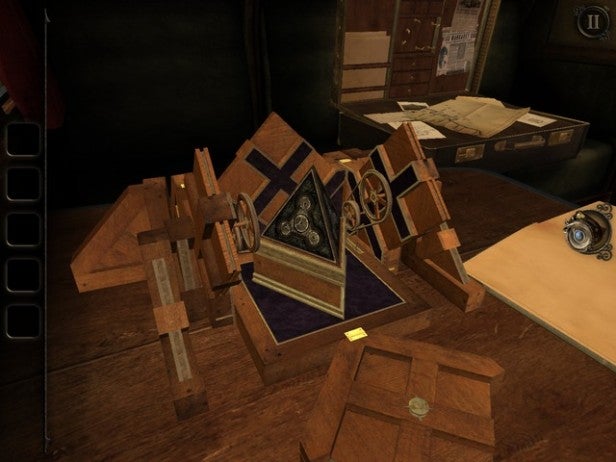 There are new additions, too. As well as physical challenges that require you to use two fingers at once – some more successful than others – The Room 3 brings a modified eyeglass that lets you slip through minute gaps to take on tiny little puzzles too small to view with the naked eye, left for you by a mysterious character called The Craftsman. It’s this Craftsman who lays the foundations for The Room 3 through a series of intentionally cryptic scrolls left for your perusal. Like a nursery rhyme suitable only for those with a rolling Mensa membership, it’s the content of these scrolls – and, indeed, the wider mystery that weaves itself throughout play – that potentially serves as The Room 3’s biggest issue.

It’s safe to say that if this is your first The Room release, or you haven’t taken on either of the other two games in the series for some time, the majority of the narrative within The Room 3 will make absolutely no sense whatsoever. Indeed, while this is a game that has all the hallmarks of a psychological thriller, much of the mystery it is built around feels a little superficial. It’s almost as if developer Fireproof had no idea The Room would out live the first game in the series and is now frantically trying to fashion some kind of meaningful message or revelation to build the franchise around, all while the games themselves are still being developed.

As a result, many of the moments that the developer presumably thought would be major discoveries will simply leave anyone but the most ardent fans scratching their heads a little. Like every season of Lost after the first one, there’s an undoubted feeling that The Room 3 is a game making things up as it goes on. 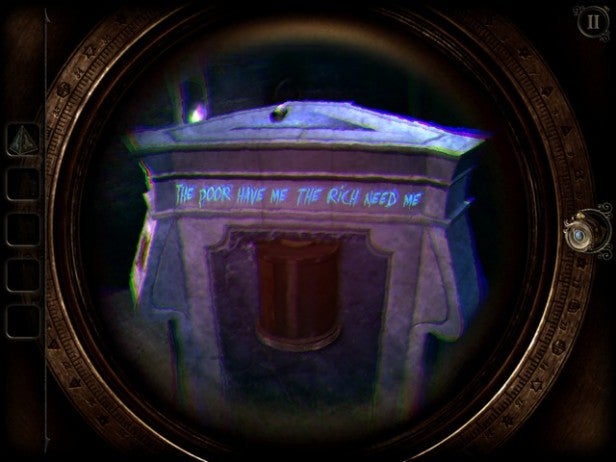 However, it’s up to the individual to determine just how much that matters. When it comes to point-and-click style puzzles, the depth and variety of challenges on offer in The Room 3 is almost unparalleled on mobile, and such is the quality of the delivery that even if you have absolutely no understanding of what is going on, the gameplay within and the atmosphere that surrounds it is enough to carry you through.

There simply aren’t enough games on mobile that take the time to fashion in the level of detail that The Room 3 boasts from its opening moments onwards, and while the story doesn’t perhaps live up to its big billing, the gameplay most definitely does, perhaps even topping the already high bar set by its predecessors in the process. For Fireproof to still be able to push the envelope three games in is, perhaps, The Room 3’s biggest mystery.

Verdict
With puzzles that are arguably even more ingenious than the first two games in the series, The Room 3 ticks all of the boxes it needs to, even finding time to take the adventure to fresh locations. A sense that the plot doesn’t quite match its big billing is undeniable, however, though thankfully it doesn’t detract all too much from some top notch gameplay.