Everything is so bad in The Quiet Man, from its fumbled central idea and its terrible combat to a plot that ends in a pile of incomprehensible revelations.

Let’s get this out of the way: The Quiet Man is a mess. It’s an awful game; one of the worst I’ve ever played. It starts poorly and only continues to get more excruciating with each passing moment of its three-hour playtime.

And yet there’s something mystifying about its terribleness. Thinking back to my playthrough I remember it as if it were a strange dream, in the way dreams sometimes linger despite making absolutely no sense. You’ll find yourself stood at the bus stop, considering the mangled series of thoughts your brain stitched together the night before. Did I really fight someone next to a life-sized gold statue of themselves? Did I really kill someone over a pair of trainers? What was that all about? And so it goes with The Quiet Man.

The conceit of this weird, bad game is that protagonist Dane is deaf and the player, in the words of the game’s blurb, “experiences the world in the way Dane does.” Now, this is an interesting idea. How do you represent deafness in an interactive medium? How can you express the reality of a character that is unable to hear the world they are supposed to be exploring? Carson McCullers’ 1940 novel, The Heart of a Lonely Hunter, follows a deaf man in a Georgian mill town. Myroslav Slaboshpytskiy’s 2014 film The Tribe charts the politics and exploitation of a boarding school for deaf students. How will a game tackle deafness, and the way it affects a person’s perception of the world? Square Enix and Human Head Studios’ answer is to simply push the mute button. The Quiet Man is largely made up of long cutscenes, split between CGI and video performances, interspersed with poorly edited beat-em-up sections. Throughout the long moments of player inaction, scenes play out in the manner of a TV melodrama, but with all the dialogue scooped out, replaced with the faint tinkle of synths. Not only is this a remarkably crude interpretation of deafness, but it clearly doesn’t reflect the experience of Dane; who seems to have a good grasp of what’s happening at any moment, and is seen lip reading and using sign language.

Purposefully obfuscating a player’s understanding of events is an interesting idea. Done well, it could put an emphasis on body language and other visual signals to unravel the game’s story. Given the attention, and money, that has obviously been put on lighting and character models, you could imagine this being an early intention: what better way to highlight CGI facial expressions than by cutting out sound? The outcome, however, is a squandered conceit that lacks any real consistency and totally misjudges the willingness of an audience to sit through five minutes of muted bad acting.

As I was playing the game, an update was rolled out that added a new mode – The Quiet Man: Answered – which lets you replay the game with sound and voices. Its makers say the game is designed to be played in two parts, although why it only released this vision as a “patch” one week after release is anyone’s guess. It also crashed the first time I tried it. To be fair to the game, a replay does reveal new layers to some of the characters but adding sound as a reveal only further exposes the shallowness of the game’s original concept. 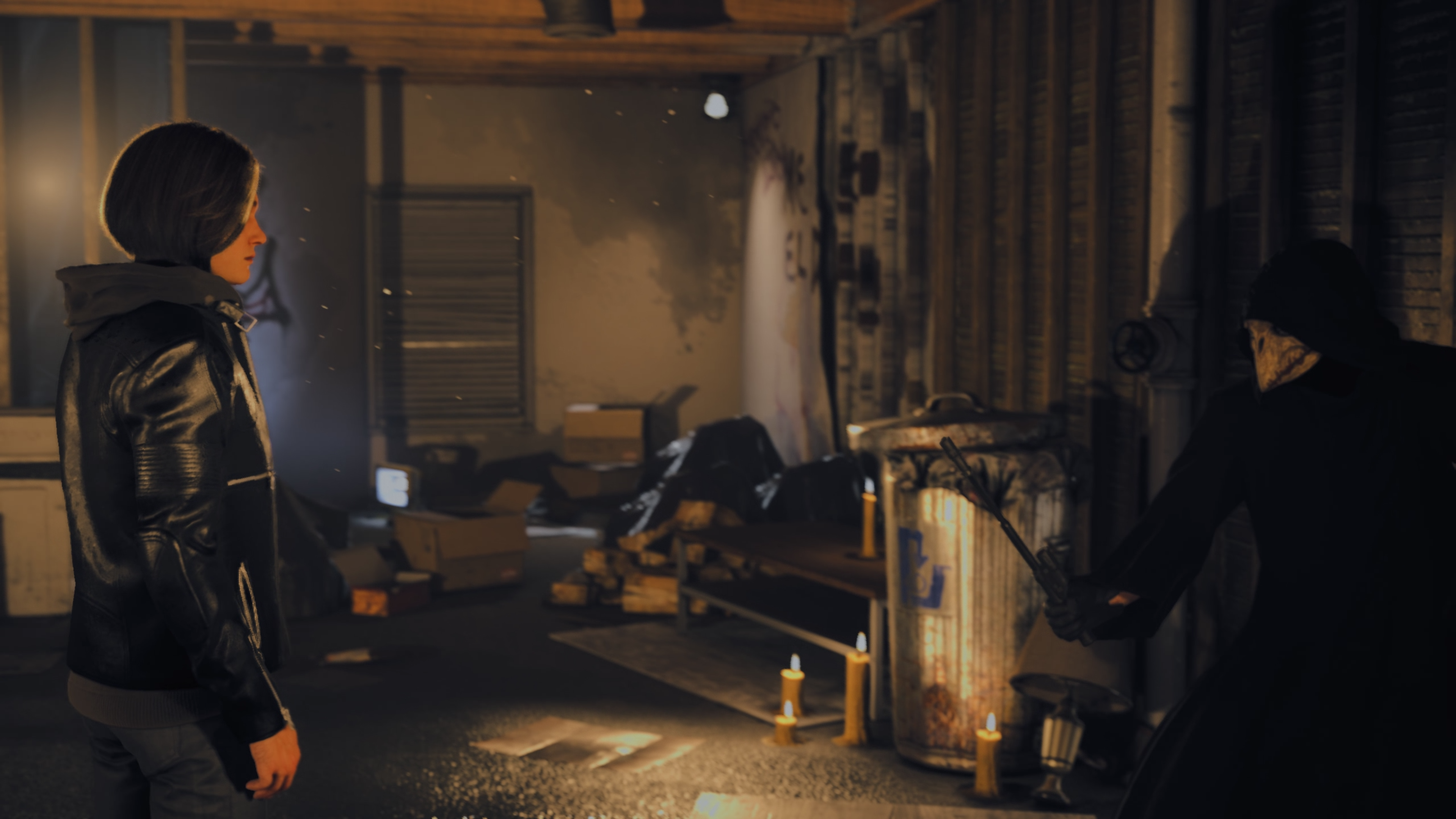 The story itself charts a tumultuous night for Dane, as he fights to rescue a club singer that looks like his dead mother. Things go from Oedipal to awful as Dane punches and kicks a series of identical gang members, again and again, over and over, until each chapter eventually finishes. Unconscious though it may be, the power structures throughout have an uncomfortably racist tint, with a white hero saving a white damsel/mother-figure from stereotyped gangs of interchangeable Latinos and African Americans. It’s lazy, although it’s hard to make too much of the game’s politics given its lurch towards the supernatural in the flabby final act.

Stripped down, The Quiet Man is a Streets of Rage style brawler, and if Square Enix had travelled a bit further in this direction it could have ended up with a fun few hours of dumb violence. Instead, these sections feel undercooked; abruptly edited and glitchy, with bodies clipping and teleporting from place to place on a regular basis. It’s the one piece of gameplay in the game, and it doesn’t work well at all.

All the same, there’s something vaguely nightmarish about these fights. Perhaps it’s the muffled soundscapes, or the way the camera clings too tightly to Dane to see who else is in the room, or the waves of identical men appearing in doorways, or the surreal overlay of filmed faces on the screen.

It’s weird; unsettling at times, and made weirder by the game’s insistence of flipping between CGI and video, often within the same cutscene. The intention may be to highlight the game’s graphical detail, but the effect is that it undercuts the reality of what’s happening on screen. Instead of making the game-engine scene feel real, nothing does.

Everything is so bad in The Quiet Man, from its fumbled central idea and its terrible combat to a plot that ends in a morass of incomprehensible revelations, that it’s something of a modern-day curio. The fact it comes from a major studio such as Square Enix, and has clearly had a substantial budget given its models and lighting, makes it all the more bizarre. Somewhere, at some point, there must have been the seed of a good idea. Whatever happened, the result is a tangle of failures that is best remembered as a bad dream.