Before moving on to other aspects of Philips’ latest smart TV offering, we do have a few general gripes to report about the interface – kicking off with its sluggishness. Philips Smart TV menus run slower than those of Samsung and Panasonic’s latest smart models, to the point of tedium in some places.

This suggests that the dual-core processing engine inside the Philips 55PFL7008 is being pushed to its limits, making us think Philips would be advised to follow Panasonic and Samsung’s lead and move to quad-core for its next Smart TV generation. After all, there’s little more likely to put off consumers than sluggishness.

The version of the smart TV interface we were using on our test sample also suffered a ‘seizure’ or two during our tests – something else guaranteed to annoy consumers. Though it should be said that such crashes can generally be fixed over time by over-the-air firmware updates. 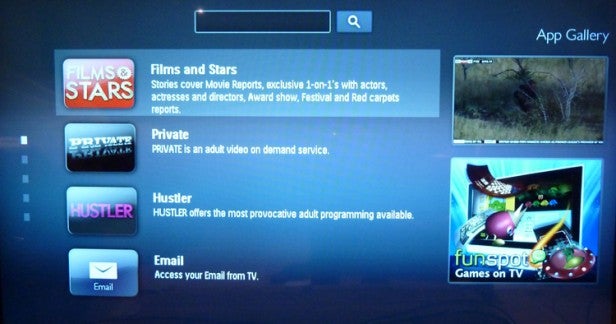 The smart TV interface generally looks a little basic and dated, meanwhile, compared with the 2013 efforts of Panasonic and Samsung (and, we suspect, LG and Sony), and it’s a shame Philips hasn’t followed Samsung and Panasonic’s lead in allowing you to quickly access your own multimedia files through the main Smart Hub. Instead, you have to go to a separate ‘Browse Network’ menu.

Finally, the structure of the menus is rather lacking in sophistication when it comes to streamlining your access to all the available apps – a problem that will only grow as Philips’ platform adds more content.

When it comes to choosing a content link from Philips’ smart TV home page, the remote control proves surprisingly handy. As well as letting you move around using a fairly standard set of up/down/left/right arrows, you can also navigate Wii-style by pointing your remote at the screen.

Similar to the ‘Magic Remote’ system used by upper tier LG TVs for the past couple of years, this point and click approach feels to us much more helpful and intuitive than Samsung’s gesture control approach. Especially as Philips has calibrated the responsiveness of the cursor’s motion so astutely that it never moves too fast or too slow.

Also very helpful is the inclusion the full QWERTY keyboard. To avoid accidental presses, it doesn’t respond to button presses unless the motion sensor inside the remote senses that you’ve got the QWERTY keyboard face up, but when you do choose to use it, it provides a much more sensible way of inputting text into web search fields or social media feeds than an onscreen ‘software’ keyboard or having to use multiple presses of the remote’s numeric keypad to input different letters.

The only negative comment we’d make about the remote control is that the ‘Smart’ button should be more obvious.

As mentioned earlier, though, the physical remote you get with the TV isn’t the only way you can interact with it, as Philips has also developed the MyRemote app for iOS and Android devices. This lets you control the TV via your smart phone or tablet computer – as well as watch what the TV is showing on your smart device (on iOS only at present), or to share multimedia from your smart device to the TV.

The fact that MyRemote’s control, ‘second-screen’ and multimedia sharing facilities are all available from one single app rather than requiring a combination of multiple apps is much appreciated, and something Samsung would do well to learn from. 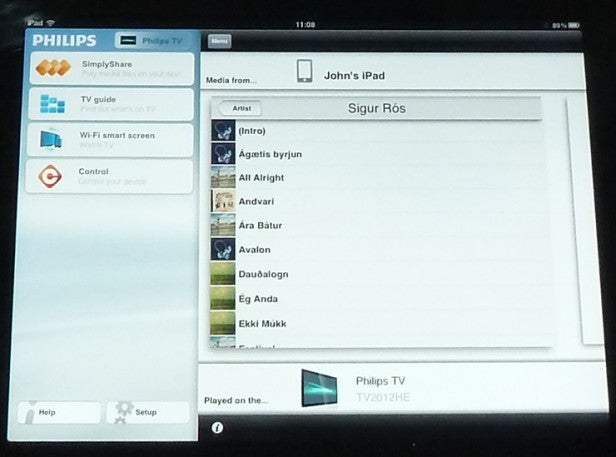 The MyRemote app immediately and automatically scans your network for connected Philips products when you fire it up, and its presentation and structure is clean and straightforward.

You get three or four (depending on your platform) simple links on the app’s home page: one for sharing content on your smart device with the TV, one for accessing a TV guide, one (on the iOS platform) so you can watch a programme showing on the TV’s tuner on your smart device’s screen, and one for accessing an onscreen emulation of the remote control.

Looking at each of these features in turn, the ‘SimplyShare’ multimedia sharing tool works excellently. Its interface is startlingly simple, and selecting and sending files to the TV works straightforwardly and quickly. Excellent. 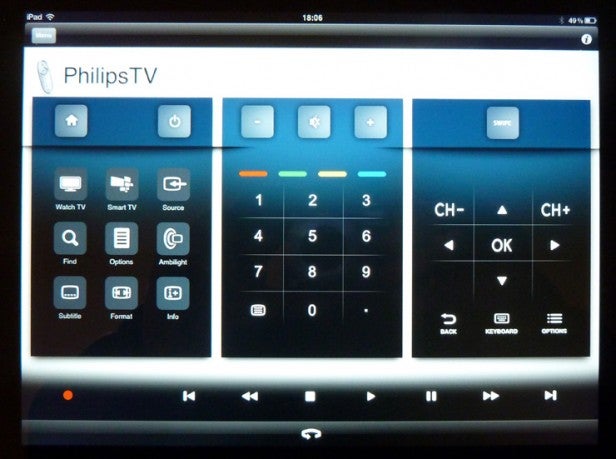 The TV Guide part of the app was much less successful for us, though. Selecting it brings up a screen asking us to input a ‘mobile link
code’, along with instructions of how to get that code from the TV. However, following those instructions (which could have
done with being more detailed) ultimately brought us to a crashing halt
as we ended up on a ‘recorded to USB programmes’ list rather than at any
mobile link code! Hopefully Philips will sort this issue out sharpish.

We
have seen this section of the app running, though, and can confirm that
once you get it going, it’s a much faster and more useful way of
accessing listings than any on-TV system could be. Plus, of course, it
means you can browse listings without disturbing what’s been shown on
the TV, and if you select a programme from the Smart device listings, it
will immediately get the TV to switch to your desired programme.

Used as the main TV for the review period
Tested for more than a week
Tested using industry calibrated tools, discs and with real world use
Tested with broadcast content (HD/SD), video streams and demo discs
Previous
Philips Smart TV 2013 Review Next
Content and Conclusions Review