With huge numbers of us now routinely streaming video content and using online apps various all manner of smart devices, the big TV brands have rightly all gone into overdrive this year to improve the scope and usability of their Smart TV online and multimedia features, making this 2013‘s biggest TV battleground.

With this in mind, we’ve already taken in-depth looks at the Panasonic My Home Screen and Samsung Smart TV 2013. Having seen one Philips TV with the new smart TV system, the Philips 55PFL7008, now it’s Philips’ turn to go under the microscope. 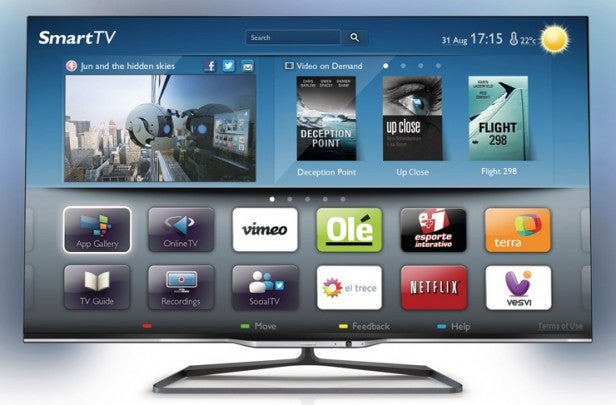 On first viewing, it’s difficult to tell the difference between the 2013 and 2013 hub screens. The best bit of the layout, in some ways, is the box in the top left where you’re able to continue watching whatever TV channel or AV input you had on when you hit the Smart TV button. Running along the bottom third of the screen, meanwhile, are two rows of fairly large icons linking to online apps and services.

As we look at the menu for longer, though, it turns out there is something new after all. In the top right you now get a window showing a cycling series of three different content ‘shortcuts’.

The first of these content shortcuts is by far the most interesting, as it not only shows large direct links to specific Video On Demand films showing on Acetrax, but the films appearing here are also recommendations based on an analysis of your viewing habits.

The recommendations system is Philips’ own engine, and can analyse your TV viewing (on the built-in tuner) and your on-demand viewing to build up a sense of your content preferences. Unlike the recommendations engine found on Samsung’s latest smart TVs, though, the Philips system only recommends on-demand content; it doesn’t also highlight upcoming broadcast shows you might like. 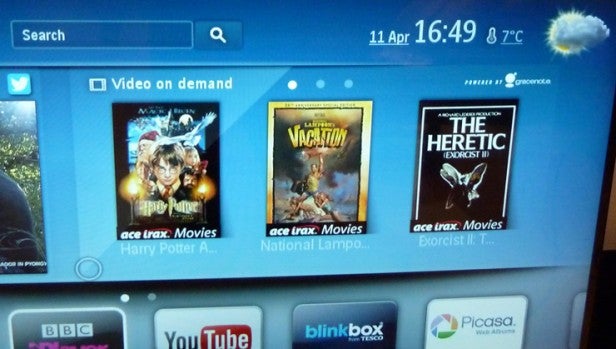 What’s more, at the time of writing the recommendations engine only highlights titles from Acetrax. Other streaming services on the Philips platform, like the BBC iPlayer and Blinkbox, don’t get a look in – presumably because connecting with Philips’ recommendations engine requires a level of metadata co-operation that only Acetrax has so far managed. For the same reason, on-demand viewing from any other providers than Acetrax also currently doesn’t register with the learning engine.

It has to be said that by only working with Acetrax at the moment the Recommendations engine is of more limited interest than it should be. Especially if you are already or are thinking of becoming a LoveFilm and/or Netflix subscriber. All we can hope is that since the recommendations engine is Philips’ own work, when Netflix and Lovefilm eventually come to the Philips Smart TV platform (Netflix is due to arrive around the end of May) they will both be able to participate in the recommendations system.

We’ll come back to the absence of Netflix and Lovefilm from the service list later, by the way…

While the Wall Street Journal links are occasionally interesting, it’s hard to imagine many people really feeling compelled to follow any of these highlighted links. It would probably have made more sense to populate the window with the most popular YouTube videos, or feeds from a more familiar (to UK users) news service. 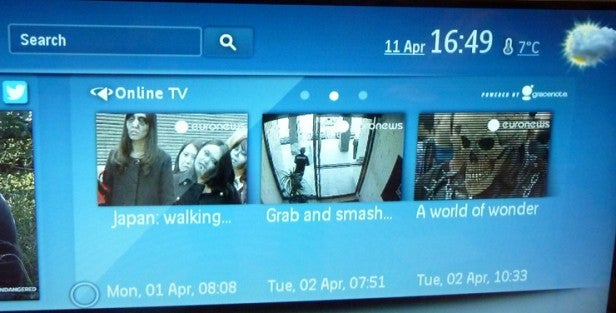 The last link in the cycling window is just a place for pointing you towards apps available in the Philips App gallery. This isn’t as annoying as it sounds. We’re all in favour of anything that helps you find new things that could broaden your smart TV experience – such as the MyRemote smart device app, which we’ll be looking at later.

While we’re on the subject of trying to help people get the most out of
their smart TV experience, it’s also good to find Philips providing
concise explanations of some of its smart features when you first access
them, making it less likely people will be baffled by what’s going on
than they probably are by Samsung’s latest, sometimes inscrutable smart
TV engine.

We couldn’t see an easy way of going back to these
explanations, unfortunately, and more detail would have been
appreciated. But any explanation is better than none. Panasonic’s latest
My Home Screen system remains by far the most friendly, though, when it
comes to helping people learn how to get the most from what’s on offer.

Used as the main TV for the review period
Tested for more than a week
Tested using industry calibrated tools, discs and with real world use
Tested with broadcast content (HD/SD), video streams and demo discs
Next
Remote and App Controls Review