For once, the clue is in the title. Firesprite’s PSVR debut is part sci-fi shooter, part survival horror and part rogue-like. It’s the unholy child of System Shock, Dead Space and Dark Souls, only played in fully immersive VR. It’s a game that demands a level of commitment, if not downright dogged determination, yet it’s also incredibly rewarding. The Persistence is one of the smartest, most tense and most exciting VR games around.

You’re the security officer on the titular deep-space vessel, only you’re not actually alive anymore, in the strictest sense. Instead, you’re a newly ‘printed’ clone of the dead security officer, her consciousness preserved in the ship’s systems and resurrected in a new sleeve by the disembodied intelligence of the equally deceased ship’s engineer.

Something catastrophic has happened to the ship and the whole thing has gone haywire, printing out weird, mutated clones of the old crew, who roam its spaces hungry for blood. Your only hope of getting out of this nightmare? To power up and reboot the ship, then set it back on course for home.

This is where the rogue-like stuff comes in. You make your way through the ship, sneaking around and using a stem-cell harvesting tool to stealth-attack and grab stem cells from the weaker mutant foes. Eventually, you’ll bite off more than you can chew, or meet one of the tougher mutants – and it’s ‘so long’ body.

Don’t worry, though. A new clone will respawn ready to restart the good work. Only the ship is constantly remodelling itself, with each deck procedurally re-generated between runs. If at first you don’t succeed, die, die, again. 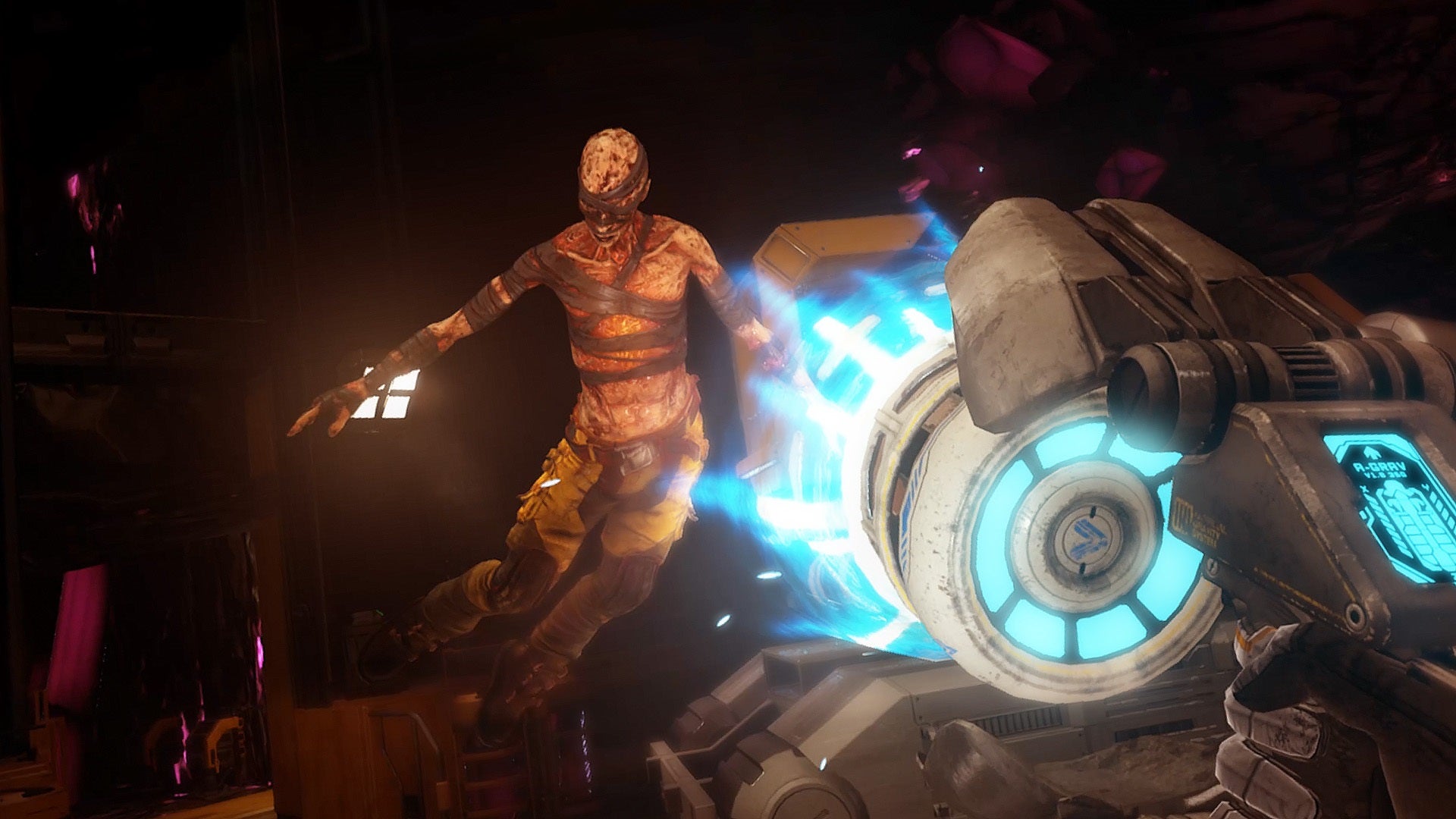 You have a series of objectives to complete before you reach your goal, each one asking you to reach a location on one of the ship’s four decks. While you’re getting there, you’re also scavenging for credits, further stem cells and Erebus Tokens.

You use the tokens at the handy wall-mounted fabricators to unlock melee weapons, guns, grenades and experimental devices, all of which have applications of the mutant-slaying variety. The tokens can also upgrade the weapon designs, while you need credits to print one out.

Sadly, your gear is lost every time you die. However, the stem cells and tokens remain with you, and the cells can be spent on DNA upgrades that boost your health, stealth, damage or dark matter stats (used to fuel any special abilities), which also hold up over repeated deaths.

You can also unlock and equip suit upgrades, which enhance your stealth, offensive and defensive capabilities. These upgrades are permanent. As long as you’re persistent with The Persistence, you’ll inevitably grow more powerful.

The game’s systems are wonderfully balanced. For agonisingly long periods it can play like a survival horror title, with a whole lot of sneaking nervously around dark corridors, using your torch sparingly for fear of alerting any nearby ghouls.

You have a heightened awareness ability to locate nearby monsters, plus a teleport ability you can use to get past them, but both powers have their limitations to stop you using them as a crutch. Then you’ll find a fabricator and splash out on a powerful gun, and suddenly it’s an FPS. While you’ve got ammo – and you’ll burn through it fast – you feel like it’s payback time. 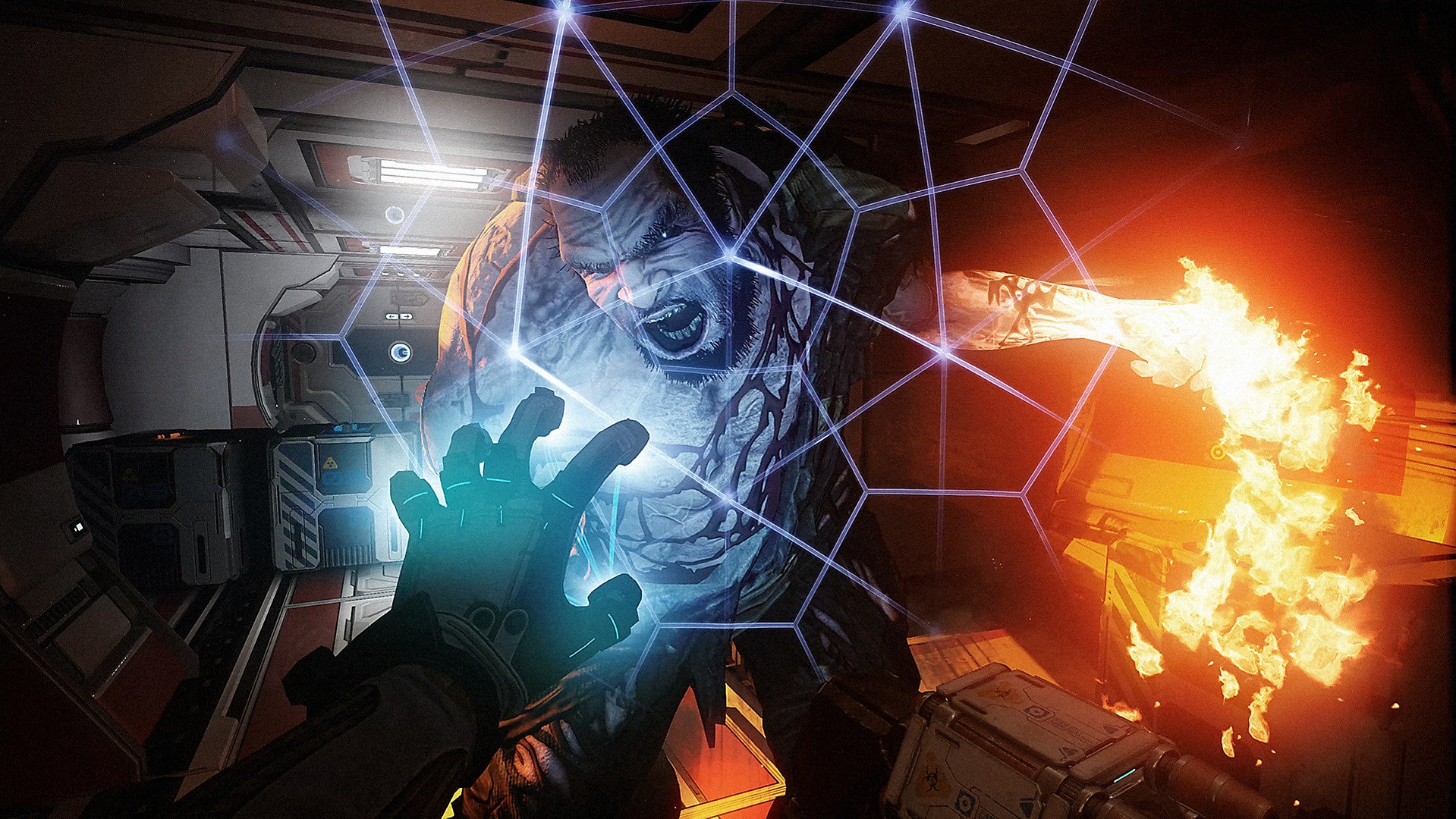 These micro-cycles of tension and release work so well because your arsenal is so imaginative, if not always 100% original. Straight-up handguns are joined by needle-spewing SMGs and high-impact harpoon guns, but you’ll also find black hole-forming gravity bombs, grenades crammed with minuscule zapping drones, or a gravity gun that lets you pick up and throw even the biggest mutants around with a toss of your head.

There’s even a nasty little number that allows you to teleport right through enemies, bursting them along the way – a mechanic we last saw in Doom VFR. You’ll take delight in dishing out the hurt, then go back to furtive stealth while you recuperate and resupply.

Meanwhile, the rogue-like elements do a great job of maintaining your long-term interest. Sure, it’s always a blow when you die, but at the least you’ll have scored some new sim cells to spend on your next big upgrade. The procedural generation makes sure that no two runs are the same, and the closer you get to your goal, the more nerve-wracking the action becomes.

Yet the smart design ensures you’re never left feeling that you’re exploring an incoherent, random space. While sometimes you’ll arrive on a deck with a massive slog through to your next objective, the layout always seems to make sense, with set-piece moments kicking in at key climactic points in the story. Similarly, new monsters shuffle in as the game goes on, ranging from hulking brutes through to remorseless armoured gits and a sci-fi relative of Left 4 Dead’s notorious weeping witch.

The visuals lack the ornate scenery and high-res textures of a AAA PS4 game, but by PSVR standards they’re superb, with enough detail to sell the deep-space setting, plus some excellent use of light and colour to unnerve you. It’s the sound that really sells it, though, with the creaks of the ship and the moans of nearby mutants keeping you constantly on edge – plus a nasty line in jump scares that can be harmless (a hatch suddenly bursts open) to downright threatening (what the hell is that scuttling thing?) 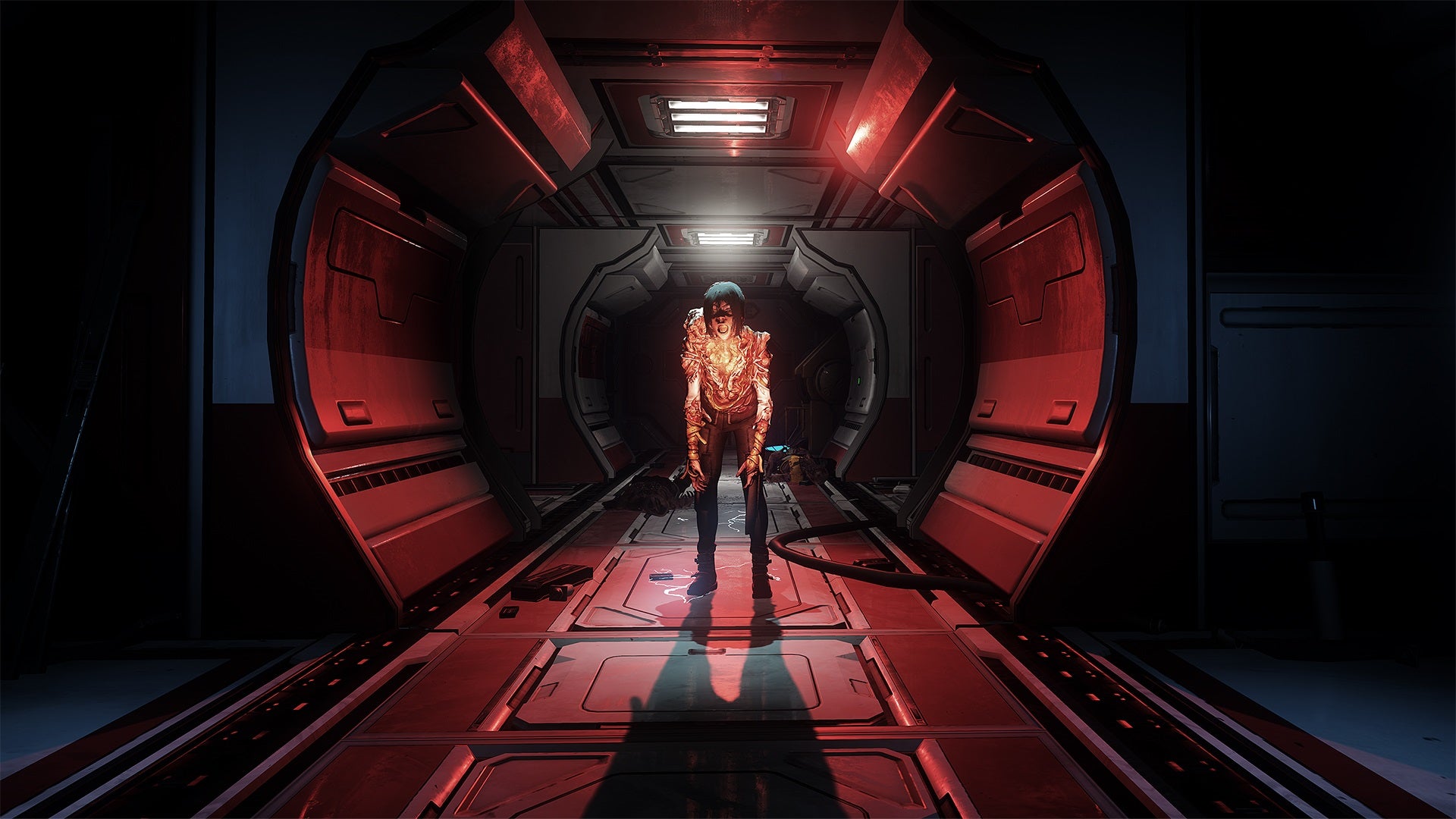 At it’s downright, brown trouser time scariest, The Persistence is right up there with Alien Isolation or the last Resident Evil. I found it incredibly immersive, creepy and thrilling. Where so many VR games feel like shallow shooting galleries or overblown tech demos, this one feels every inch a proper game, with many hours of exploring and upgrading to get through – plus a ten-clone limit Survival mode to unlock when you do.

What’s more, The Persistence should be a poster child for how you can handle action games in VR. You control it using the standard DualShock; three different settings giving you three different balances of comfort, accuracy and speed.

It’s a little like playing a conventional FPS, only with your head controlling aim. However, you can also rotate your view with the right-stick in full, smooth motion or 90-degree increments. When you have to activate something, you do so by focusing your vision on it for a second – such a smart, intuitive way to do things, you wonder why everyone hasn’t done it.

Combat relies on the head-controlled cursor for aiming, but targeting is smooth and, with practice, incredibly quick. Close combat, meanwhile, relies on a combo of a Left Trigger shield to repel attacks and quick blows with the Right Trigger to counter-attack. Get a great weapon in your mitts and it’s immensely satisfying.

I’ve had a few odd moments of nausea here and there, but in general the controls work phenomenally well, giving you the responsiveness of a great shooter, but without the unwieldy movement or motion sickness other games have settled for. Everything works to keep you immersed.

If you fancy some co-op action, there’s a companion app available to download. It allows a second player to help or hinder, using the map to find items or distract the mutants – or start messing with the lighting and push some trouble your way. We weren’t able to check it out pre-release, but it could be a fun way to share the experience once you’re done with the main campaign.

Sometimes, you wish The Persistence didn’t demand so much, well, persistence. The game is incredibly tight with the items needed to unlock the teleporters to the later decks of the ship, and you can spend ages stuck on the first two decks, moving through the research deck to get the star-engine deck, then dying before you reach your objective and having to restart at square one.

Every now and then, the way rooms and monsters are configured seems unnecessarily hostile, if not plain unfair, and the monsters and scenery can grow repetitive. Yet there’s always a sense that you’re making progress and that your next run might be the lucky run. All you need to do is keep the fear at bay and hold your nerve.

The Persistence isn’t easy – and it can be frustrating – but then persistence tends to bring its own rewards. This is a thoughtful, well-balanced blend of action and survival horror, designed by a team that plays to the strengths of the new VR medium while minimising so many of its weaknesses.

There are still too few must-have games on PSVR or any VR platform. The Persistence adds one more to the number.