The Path to Luma is a puzzle in every sense of the word. For one, this is quite literally a puzzle game, charging the player with manipulating the elements within its spherical levels to get from A to B, typically before heading straight back again. It’s a set up that we’ve seen time and again on iOS, although usually delivered in a flatter, more 2D focused form.

It’s this decision to take what is essentially a straightforward 2D game and map it out on a series of 3D planets is what is, initially, the game’s other puzzle. While there’s much to love about the game’s visual style, which looks a lot like a series of folded paper models, more vexing is the developer’s decision to take gameplay design that needs a flat, solid base in order for it to shine and map it out on a series of orbs that make interacting with it needlessly fiddly.

It simply doesn’t make sense, until you note one of the logo’s in the game’s initial loading screen. For The Path to Luma, developer Phosphor Games Studio has partnered up with NRG, a firm that focuses on developing low carbon and essentially clean energy technologies. Given your job in the game is to play the role of SAM – a Sustainability Augmentation Model robot – as he travels the universe in an attempt to clean up a series of destitute planets, it’s not hard to understand why developer Phosphor chose to use 3D spheres as a basis for its design. 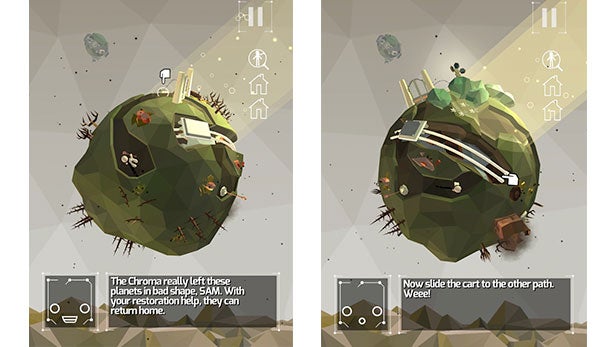 The problem is, said design doesn’t really sit at home all too well with the home its found itself on. Though the superficial elements change as you progress through the game, the basics of The Path to Luma are easy enough to grasp: reviving a planet involves getting to a set location, usually opening up a number of gates as you go. The puzzles aren’t actually too taxing: Opening up an early gate, for instance, is a matter of fetching a battery pack, charging it up and then placing it in a holder near said gate in order to power it open.

Indeed, the first run of levels focuses on solar energy, planting a ‘solar spear’ in set holsters around the planet and then turning said world on its axis so that the sun powers up the entire surface. Moving SAM is relatively simple, at least in theory, with tapping where you want him to go enough to send him trotting. You’ll also need to traverse bridges over gaps in your path (bridges that can be moved into place simply by dragging them) and, as stated, open up a number of blockers in your way, but the whole affair is relatively simple.

Until, of course, the 3D nature of The Path to Luma gets in your way. Another early stage requires you to temporarily open a gate by shining solar energy on it, tipping the planet in one direction to line it up. Problem is, doing so then makes it especially difficult to guide SAM through said gate. Moving the planet more favourably in your direction so you can guide SAM past said gate caused the gate in question to lose connection with the suns rays and begin to close. It’s a fiddly little moment that highlights why, though visually appealing, the orb-based nature of the game’s levels don’t really fit with its design. 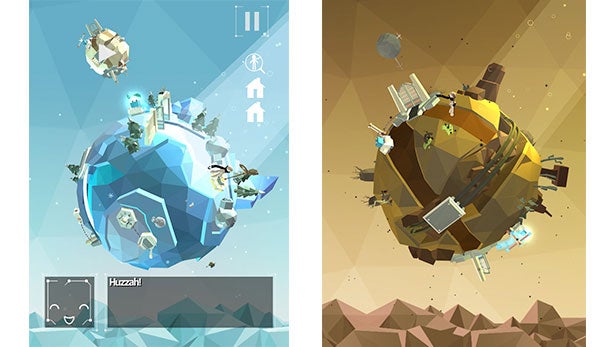 In fact, you could say the lay out and look of the levels utterly complicates things. To begin with, it’s not even especially easy to tell a spear apart from the rest of the game’s level architecture, or even spot the bridge you’re meant to cross. It’s almost as if a simple game idea has been picked up from the cutting room floor and married up with a pitch focused on promoting sustainable, clean energy, and the two elements simply aren’t a good fit.

And that’s a shame because, even putting the glorious (but entirely impractical) visuals aside, there are nice moments aplenty within The Path to Luma. Later levels switch from solar to both wind and water power, shifting the dynamic a little at least aesthetically, though on a practical level things essentially remain the same: head from A to B, checking off multiple mini goals along the way, all an environment that just begs to be explored.

This is just the wrong game to do it in – it almost feels as if the puzzles were intended for a different game and were swept up from the cutting room floor, retrofitted to fit in with The Path to Luma’s environmentally friendly theme and then dressed up by a particularly talented visual artist. In short, it doesn’t really work, though the game’s big saving grace is that it’s free and without in-app purchase. On those terms, it would be a little puzzling to complain about its faults all too much.

Verdict
Though stunning to look at and entirely free – without in-app purchases, no less – The Path to Luma is a bit messy, a bit sketchy, a bit patchy. Its puzzle set up never really bonds with its 3D setting, despite some really nice elements designed to push clean energy and green issues. All in all, it feels a little bit like a series of compromises that never truly pay off.