Exclusive to PS4
The Order: 1886 was intended as a launch period game for PS4, so perhaps it’s no surprise that it still feels like one. It’s an astonishing graphical showcase, doing for the PS4 what Ryse: Son of Rome did for Xbox One, then moving on to blow that game and just about everything else out of the water. Yet it’s a game that’s mired in poorly-conceived game mechanics, dated thinking and an obsession with cinematic values over gameplay ones.

At times, The Order:1886 feels oddly quaint, as the team at Ready at Dawn rush to catch up with Gears of War and Uncharted at a time when gamers and other developers are looking for what’s next. It’s not quite as short an experience as you might have heard and it has its merits, but anyone looking for the PS4’s elusive killer exclusive will be left high and dry once again.

For all its telegraphed twists and clichéd lines – with a few unbelievable howlers later on – the game just about works on a narrative level. The Order: 1886 takes place in an alternate late Victorian London, where humanity and Empire are protected by the titular body; a circle of knights dating back to King Arthur and the Round Table, and pledged to defend humanity from dark forces.

The action kicks off well, posing questions that will be resolved later, before following our hero, Galahad, attempts to investigate a rebellion and sinister happenings in Whitechapel. Thanks to a combination of motion capture and strong voicework, he’s a gruff but likeable protagonist, and the rest of the cast stand up just as well. It falls apart in places, with some abrupt plot shifts and a spot of dissonance here and there, as Galahad talks about how he won’t kill innocents before going on to murder several hundred people who were just doing their job, but it’s a grim, compelling tale that drags you forward.

The visuals, meanwhile, are nothing short of gob-smacking. The Order: 1886 looks like a cut-scene in motion, hitting you with layer upon layer of texture, surface effects, volumetric mists and cinematic lighting, and almost endless detail. Ready at Dawn’s artists have done a fantastic job of melding steampunk and high-Victorian art and design, and the result is a game full of dazzling spaces, beautiful objects and believable people. 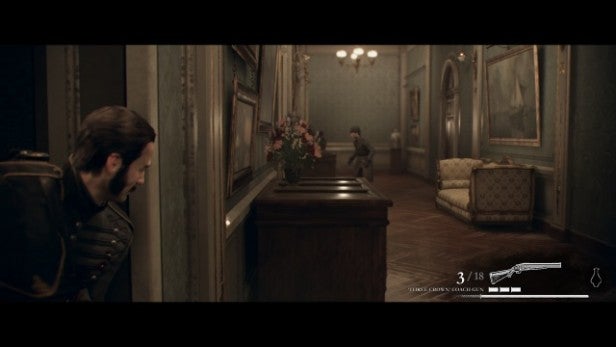 Unfortunately, it often feels like a cut-scene in motion. The Order: 1886 goes big on lengthy (and unskippable) cut-scenes, albeit ones punctuated by a flurry of quick-time events (QTE), and this combined with the quality of the graphics can make it appear only semi-interactive, like a poor facsimile of a David Cage game. There is an awful lot of hammering X, tapping triangle at the right moment, and moving the right-analogue stick in the prescribed direction and – we’ve said it before, we’ll say it again – it’s not much fun. 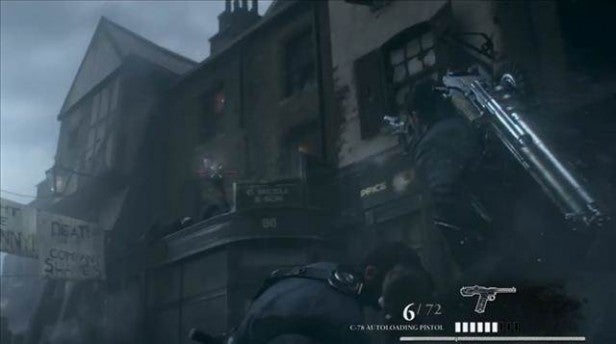 In fact, The Order: 1886 often seems to have been designed to antagonise a certain group of gamers – and most game journalists to boot. Think of anything that annoys you about blockbuster action games and it’s here, from the aforementioned reliance on QTE to pointless lock-picking and circuit-breaking sequences (both mercifully easy), uninteresting traversal, AI companions bossing you around, poor cover mechanics and rotten stealth sequences where getting spotted once means instant death. I swear, there’s a section later on where the combination of insta-fail stealth and Galahad’s propensity for getting stuck to low-lying shrubbery caused me to scream at the TV in incredulous rage. Don’t even get me started on the stupid werewolf battles, which mix shooting and QTE to bizarrely comic effect.

No game does quick-time all the time, and for most of its length The Order; 1886 is a straight cover third-person shooter in the mould of Gears of War. While there’s some traversal a la Tomb Raider or Uncharted, it’s basic and hived off from the blasting bits. As a shooter, it veers from passable to solid to sporadically great, but there’s not enough variety or intelligence in the enemies or enough va-va-voom in the set-pieces to keep the pace at fever pitch for long. There are some brilliant weapons, like the electricity-spewing Arc Gun or the spray-then-ignite Thermite Rifle, but you don’t get to play with these often enough. It’s a Gears of War without the invention and breathless intensity. 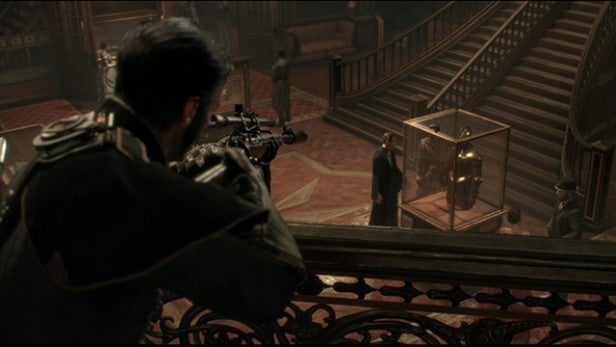 And when you’re not in combat, you can’t help but notice how restrictive the whole thing is. This is a world full of closed doors, where immovable objects and weirdly immovable people can stop you from going anywhere the developers don’t intend you to go. You can investigate a handful of documents or cupboards, but the rest are off-limits and utterly non-functional. Even when you’re playing detective, you’re merely looking for all the objects in the scene you need to interact with to trigger the next cut-scene.

Bar a few sequences where the action opens out, it’s a game where there’s one approach and just one way to tackle the situation, and you’re just going to have to play it by the book. You can’t even decide between lethal and non-lethal takedowns. Just tap the button you’re told to, and let Galahad do the rest. By comparison, it makes even games as heavily orchestrated as Uncharted 3 look as rich and open as a Far Cry 4. 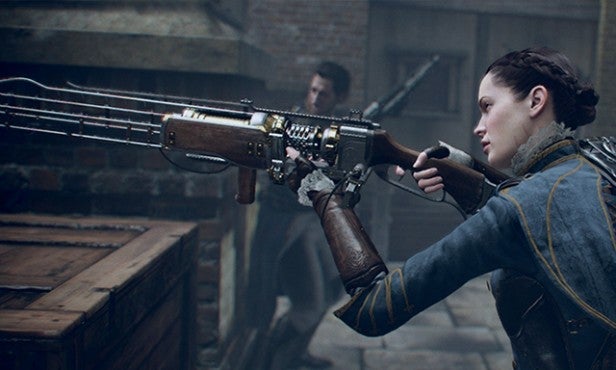 For all this, we mostly enjoyed The Order: 1886. We cracked the game in roughly seven hours, warmed to the shooting and the weapons, revelled in the spectacle and got involved in the story, for all its clichés and faults. What we can’t do is recommend you buy it. We’re not ones for tacked-on multiplayer, but seven hours of flawed, sometimes decent gameplay doesn’t seem great value for £40 to £50, even with visuals as sumptuous as these.

Verdict
A stunning graphical showcase that can’t hide a so-so game. The Order: 1886 has a great premise and a decent, albeit clichéd narrative, but the cost of its cinematic values comes in restrictive gameplay, mediocre shooting and an over-reliance on quick-time events. It’s a fantastic looking game with which to show off your PS4, but it’s too short and too unimaginative for its beauty to be anything more than skin-deep.